With China’s future in fragile balance especially in the protesters’ flickering lights of Hong Kong, that the childlike innocence with which the boy bounds into his throne completes the circle as the fallen, old emperor dares to bound out like a son of heaven on earth.

The winner for 1987’s Best Picture Academy Award is a sprawling, cold yet effective motion picture. The Last Emperor, photographed by Vittorio Storaro and directed by Bernardo Bertolucci, lacks character and intimacy. The epic about a monarch in China doesn’t make you care about the title character.

But it makes you think about one of the most exotic, populous and mysterious nations.

The Last Emperor is not an intellectual story. Mr. Bertolucci makes a point on purpose of avoiding serious examination of what moves a country. Don’t expect the role of ideas to be prominent here. Religion is shockingly absent, considering the history of China.

But this is a pictorial feast. In red and black opening credits, The Last Emperor pulls into the world of Manchuria in 1950 along the Chinese-Russian border. Carloads of timber align with a passenger steam train pulling into a station. On the railroad platform stands a long, unbroken line of beige-uniformed, gun-toting Communist soldiers blocking the exit of any passenger from the train. A black-coated figure patrols behind the line of soldiers as a belligerent voice on a loudspeaker bellows to the carloads of human traffic:

“Those caught talking will be severely punished.”

Audibly and visually, The Last Emperor is unequivocally anti-Communist and anti-authoritarian. By depicting what happens, pieced together in flashbacks, in the life of the boy emperor, this version (preceded by an adaptation made in Hong Kong of a memoir by China’s last emperor, Pu-Yi) carefully if smoothly unfolds. 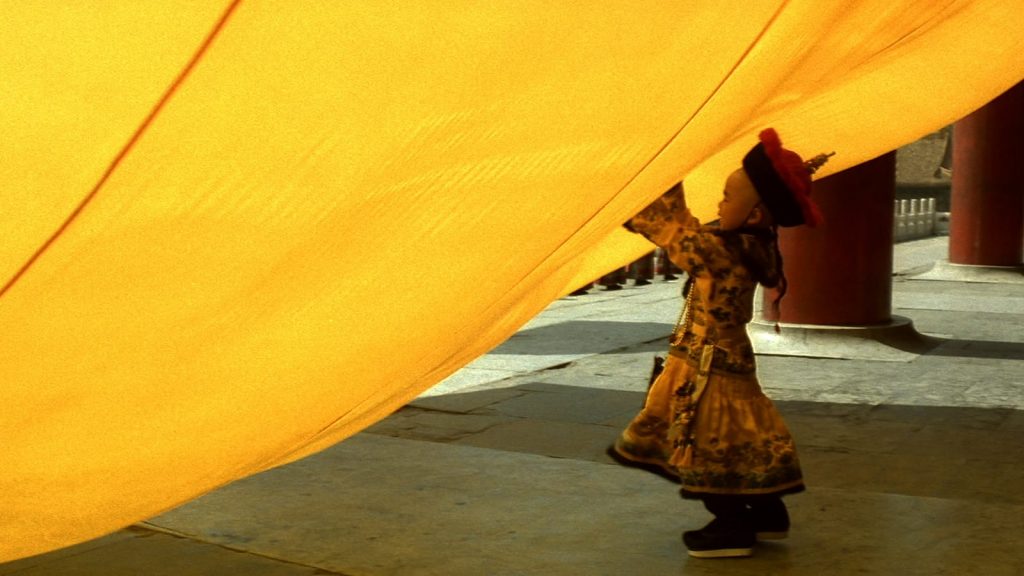 The indelible first flashback goes to red-tinged Peking (now known as Beijing). The year is 1908.

Banished to China’s Forbidden City by another authoritarian guard, a baby given to another woman who is not his mother comes before the grand empress dowager. The old woman promptly designates him as her heir and dies, leaving the boy to become emperor. The presence of authoritarian military figures is a clue.

In this sense, The Last Emperor captures the deeply embedded militarism in Asian culture. If faith and force go hand-in-hand as Ayn Rand wrote, and they do, China’s pervasive lack of autonomy and endlessly looming sense that archaic traditions, patriarchalism and rule by brute force lords over the individual’s life.

“I am the son of heaven!“ cries the adorable boy with exuberance and jubilation, which won’t last long. No moment is his own. No possession belongs to him. No achievement can be owned by this child. Everything he has and does is experienced as part of a collective of warped, peering and blank-faced, petty peoples without purpose other than cold, blind tradition for the sake of duty and obedience to tradition. It’s chilling though it’s intended in Messrs. Bertolucci’s and Storaro’s deft hands to depict beauty.

But breast-feeding on his mother as a pre-teen boy gives some sense of the boy’s retardation. 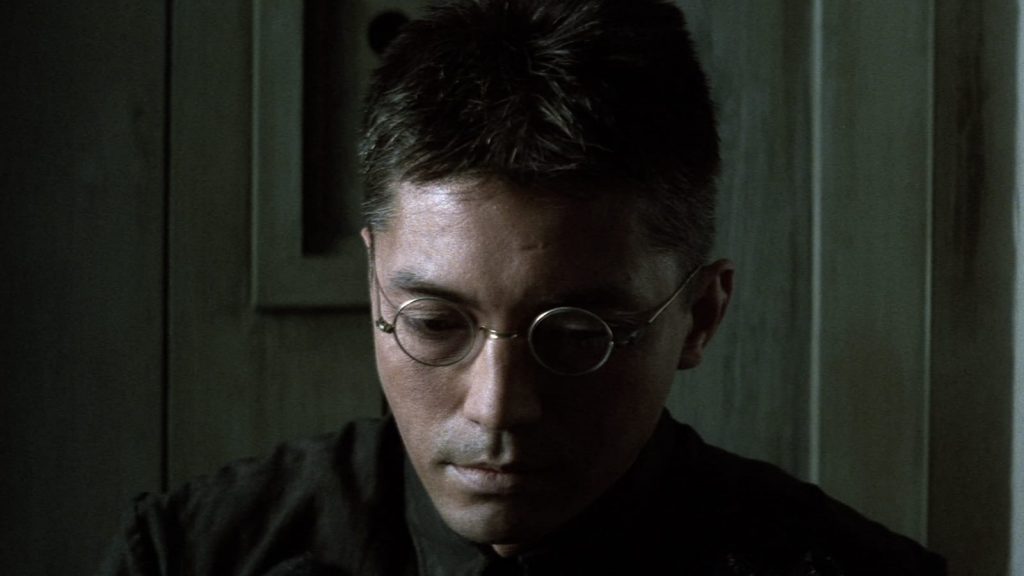 Soon, beneath a red star, a Communist steps onto a crate to make a speech. The framing device continues to dramatize the shuttling of man and boy in stark and horrifying detail. Through Peter O’Toole‘s narration as the emperor’s British tutor, the audience learns that China falls into the hands of “corrupt bureaucrats“.

“The era of the warlords begins,“ O’Toole’s tutor forewarns.

The government beheading citizens for their protests, expelling eunuchs from — and Japanese occupation of — the Forbidden City take their turns in the story of this oddly inhuman figure. But you see why he becomes inhuman with no real sense of himself, which strikes me as a serious insight into this deeply mystical and collectivist ancient culture.

The emperor shrinks as he grows. And he is, after all, the emperor in spite of being slowly drained of power. Forced to leave the Forbidden City and go into his own country for the first time in his life, the emperor, having taken a wife and a mistress, takes solace in the new century’s burgeoning Americanism. Performing an American pop standard with a golden voice in a nightclub in Tientsin in 1927 with other performers in blackface, The Last Emperor spins a subplot about Western impact on the Far East.

In the movie’s most affecting scenes, his secondary wife, deprived of his company and any meaningful intimacy, discloses that she wants a divorce after dancing with an American. Being asked to dance causes her to realize that she’s human. It occurs to her that she may very well deserve to be treated as such. The moment in which she liberates herself from the empire and its trappings is beautifully filmed. When she stops her own departure, pauses and hands an obedient servant an umbrella during a downpour, it’s like watching one woman’s liberation for life. 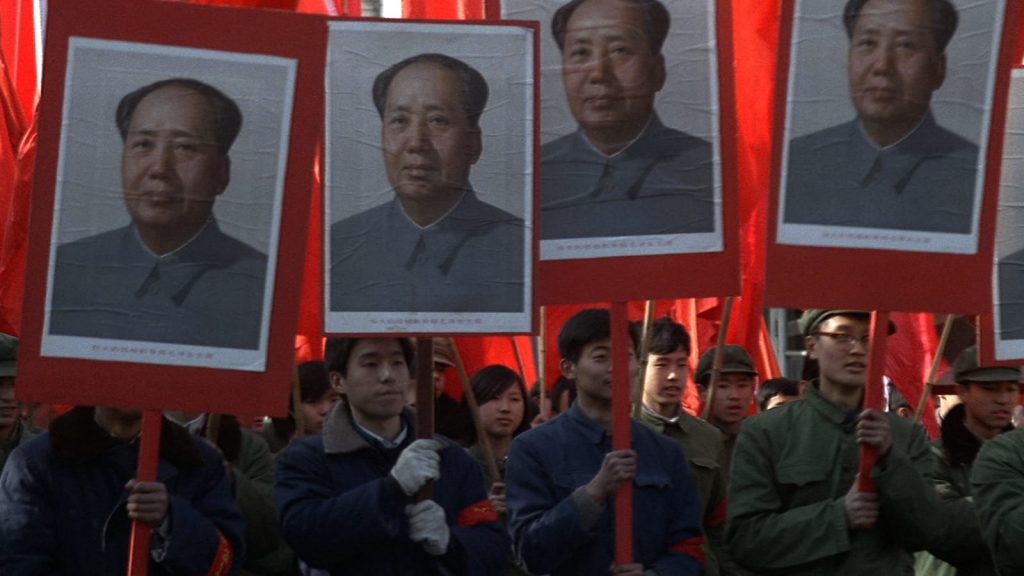 Add to this scenes of opium addiction, lesbianism, tragic same-sex union, Indulgence in a foot fetish and imprisonment by Communists and you get some sense of the epic scale of this magnificent if placid picture which was partially filmed in the Forbidden City in Communist China.

Following exhortations of Japanese racism, too rarely depicted in motion pictures, The Last Emperor unwinds into quiet conflict as the emperor faces the consequences of his myopic actions.

By the time he becomes as liberated as his mistress in Peking in 1967, surrounded by what amounts to his successor, the authoritarian pictured in large portraits of the bloodiest dictator on earth, Mao Tse-Tung, the strikingly handsome, golden-voiced man who was once a beautiful boy, becomes just another beige-toned proletarian — an aging worker blending into a faceless mob — another comrade in the herd of bicyclists amid the horror of goose-stepping, flag-waving Communists.

After one valiant attempt to express his affection for the only person on earth to respect him — and seek his respect in return — the filthy-clothed emperor, reduced to a commoner at last, encounters a bright-eyed but belligerent red-scarfed child. Beckoning to an earlier scene of innocence when he was a boy, with rich symbolism in Chinese culture, a cricket comes out. This is all there ultimately is to The Last Emperor. I do not know, and I doubt, whether Bernardo Bertolucci intended to convey this meaning.

But it occurs to me as I write this, with China’s future in fragile balance especially in the protesters’ flickering lights of Hong Kong, that the childlike innocence with which the boy bounds into his throne completes the circle as the fallen, old emperor dares to bound out like a son of heaven on earth. Either way, boy and man, by striving if not succeeding to live as the one in the many, leave a mythical if marginal legacy of life behind.