In part one of this series, I claimed that the barrier to understanding money creation is mainly psychological, not intellectual.

John Kenneth Galbraith wrote, “The process by which banks create money is so simple that the mind is repelled. When something so important is involved, a deeper mystery seems only decent.” [1]

Today I want to make good on my claim that bank money creation is not rocket science. There is no mystery! All it takes is an inquiring mind.

A brief history of banks

You may be surprised to learn that banks’ money creation mechanics have not changed for hundreds of years. So one good way to understand the current system is to gain a basic understanding of banking history.

For thousands of years, before the invention of modern banking, precious metals (mainly gold and silver) were recognized as money by most of the civilized world. As culture and commerce advanced, gold became the premier form of money.

During the Early Middle Ages in Europe, as the gold trade developed, goldsmiths (artisans who fashioned gold into jewelry, tokens, or coins) became trusted custodians, acting as safekeepers of gold for a fee.  The goldsmiths organized into professional associations, known as guilds, to protect their reputation, prevent fraud, and maintain high standards of service and craftsmanship. The public trusted them, and the goldsmiths gained significant economic influence over time.

Modern money creation was conceived when goldsmiths began to issue paper receipts as evidence of their customers’ ownership of gold. These paper receipts could be redeemed for physical gold on demand or exchanged in ordinary commerce just as if they were physical gold. Paper receipts became popular because they were a more convenient form of money: they were lighter, easy to conceal, and the gold itself was not subject to wear or erosion due to constant handling. [2]

The birth of modern banking

The goldsmiths’ evolution from safekeeping to banking is illustrated below. On the left is the goldsmith’s balance sheet before he becomes a money-creator. The goldsmith’s assets (his “reserves”) are his customers’ gold deposits held in safekeeping. His liabilities are the depositors’ claims to gold. These liabilities are convertible to gold whenever a customer presents a paper receipt for redemption.

On the right is the “Goldsmith Bank” balance sheet after the goldsmith becomes a banker and money creator. 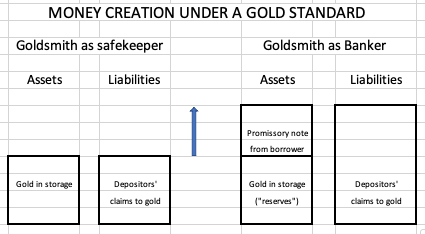 Something new and important happened when Goldsmith Bank made its first loan, labeled “promissory note from borrower.” The bank’s balance sheet – all its assets and liabilities – grew.  Goldsmith Bank’s assets now include both the gold on deposit and the note from the borrower. The bank’s liabilities include both the old claims for gold and the new claims given to the borrower as payment for his note. Notably, both the old and new claims are indistinguishable from each other. All the gold claims, old and new, are evidenced by paper receipts that can be exchanged in the economy as money, and the public considers all to be “as good as gold.” The money supply has increased!

The critical point is that both then and now, banks do not ordinarily lend out their reserves.[3] In fact, banks do not “lend” at all in the exact sense of the word.

A “loan,” by definition, means the lender has temporarily given up the use of his property, which will be returned as agreed by both the lender and borrower. For example, I might lend you my car for the day, to be returned by six p.m. Or you might lend me $1000 cash, and I agree to repay in cash next week. But this kind of lending is decidedly not what banks do.

From their historical beginning to the present, banks have been in the business of acquiring assets. What we call a “bank loan” is the bank’s purchase of an asset called a promissory note. To pay for this asset, the bank gives the borrower a contractual promise to pay out bank reserves on demand. Until the advent of bank drafts and checking accounts, these “promises to pay reserves” were usually in the form of paper banknotes issued by the bank. Today these promises are mainly in the form of bank “deposits.” The receiver of the new money, the borrower, is free to spend or invest these “promises” as if they were money, and they continue to be exchanged person-to-person in the economy.

This is what some contemporary economists mean when they say money is “loaned into existence.”

Money is also created when banks purchase other assets, such as government and corporate bonds. Like the promissory note’s seller, the bond seller receives new money in the form of a promise to pay out reserves on demand.

The entire scheme is based on trust. As long as the public believes the bank can redeem these claims for bank reserves on demand, they have the same purchasing power as the reserve money itself.

The financial revolution of bank money creation was not only a boon for the bankers but also beneficial to the borrowers and all other economic participants.  Bank lending promotes general prosperity as long as bankers make productive loans that create new wealth.  The additional money injected into the economy is not inflationary if investing generates new goods and services or a better production method.

Ostensibly, banks continue to create money today just as they always have. However, beneath the routine lending mechanics, there is a crucial difference between banking then and now. In the modern era, the regulation of bank reserves is radically different than it was under the gold standard.

Under a gold standard, the bank’s reserves (gold coins and bullion) were controlled by the banknote owners and deposit holders. If they believed the banker’s loans were too risky, or if the deposit holders were unhappy with the rate of interest the banks were paying, they could cash in their notes or deposits and withdraw their gold from the bank. Because gold is scarce and expensive to mine and refine, replacing lost reserves was difficult. To keep the depositors’ gold on reserve in his vault, the banker had to maintain the depositors’ trust. Maintaining trust meant the banker could not engage in reckless lending that resulted in losses and possible criminal liability.

In other words, the banker had to make a profit without taking risks unacceptable to his gold depositors. This free-market constraint limited the amount of money the bank could create, making severe inflation impossible.

Today, bank reserves are no longer gold but are paper bills (or their electronic equivalent) printed by order of a central bank – that is, created by “fiat.” Deposit holders can still withdraw cash reserves from the bank in the form of paper bills, but the depositors no longer control reserves because the central bank can print as much as it wants. If a bank fails, its depositors are usually “made whole” by money printing. Consequently, under this “fiat reserve” system, we rely on government officials, not depositors in a free market, to regulate the quantity of bank reserves, influencing the amount of money banks can create.

Although our fiat reserve system opens the door to inflation, an element of market discipline still drives our banking system. Today’s bankers still answer to shareholders who want to make profits, grow their stock dividends, and avoid bankruptcy.  When lending decisions are left to entrepreneurial bankers, they are more likely to make productive loans that create new wealth. As long as bankers create money and entrepreneurs create wealth at the same rate,  inflation will not be a problem.

Unfortunately, since the Great Financial Crisis,  government officials are increasingly interfering in bankers’ entrepreneurial lending decisions.  Since then, much of the economy’s new money has come not from entrepreneurial lending and investment decisions but decisions of the Federal Reserve, Congress, and the President. Because most of these government lending and investment decisions are not productive, they are, by definition, inflationary.

Today, given our mix of private and public money creation, some lending decisions are legitimate, and some are not. How can you determine which is which? In the upcoming Part Three of this series, I’ll offer a framework to help you decide for yourself whether money creation decisions are sound or not.