Time for US To Get Tough With Europe: No More Military Welfare for Indolent Defense Dependents 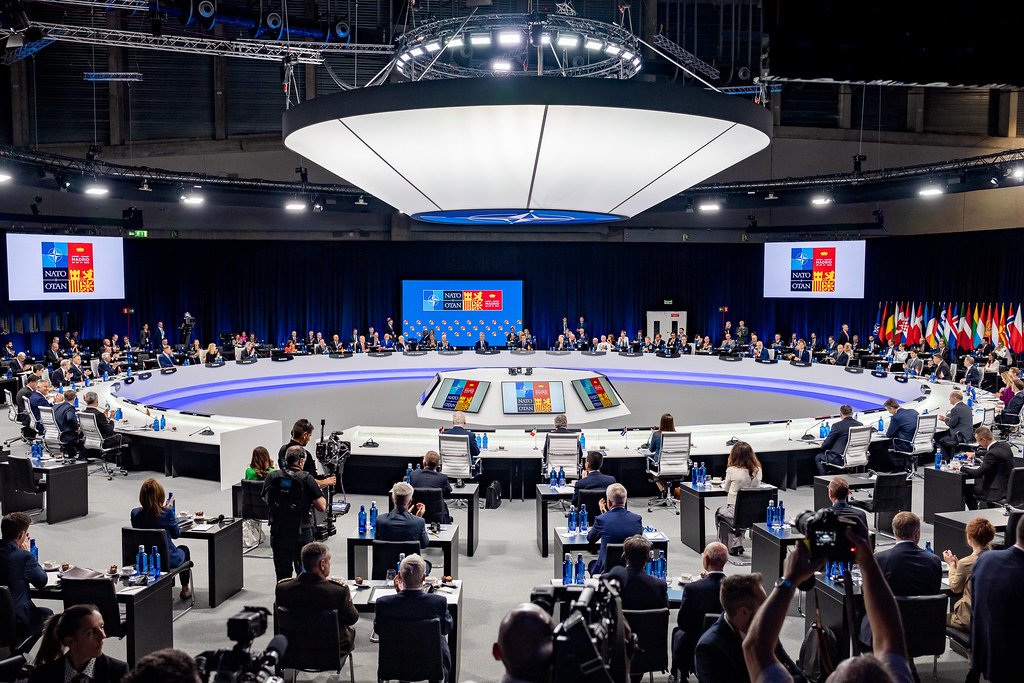 Almost six months ago Russia invaded Ukraine. It was a criminal and unjustified act of aggression, but was not entirely surprising given allied bad faith in breaking multiple ostentatious security assurances to Moscow. The one apparent positive result was the recognition of European governments that they needed to do more militarily on their own behalf.

Alas, that was then. In the meantime, the Biden administration rushed thousands of US troops to the continent and at the Madrid NATO summit promised further reinforcements. Suddenly Europeans seem to have lost interest in better defending themselves.

Nowhere was the national transformation more dramatic than in Berlin. Chancellor Olaf Scholz of the left-leaning Social Democratic Party, known for its practical if not official opposition to meeting NATO’s spending target of two percent of GDP, dramatically promised a reversal. Indeed, his announcement was termed a Zeitenwende, or “watershed moment.” Other European governments were expected to follow Germany’s example.

To be sure, this was to be just a start. Berlin spent years, decades actually, underfunding its military. Outside assessments were brutal: “Given the dismal state of Germany’s military, the Bundeswehr, including a lack of functioning equipment, the current steps are unlikely to measurably improve Germany’s defense capabilities. Much higher spending will have to be sustained over at least a decade just to make up for past neglect.”

Now it looks like Scholz’s program may fizzle out in months.

Berlin has played its role as Kyiv’s armorer only reluctantly despite significant expectations of change. Moreover, Germany is walking back its promise to station forces in Lithuania. Reported the Financial Times: “Germany has proposed basing most of the 3,500 extra troops it plans to contribute to NATO forces on its own soil rather than in Lithuania, significantly softening its initial backing for more foreign forces to be stationed in the Baltics to deter any potential Russian aggression.”

Moreover, the Scholz government has done little better with its budget, the supposed Zeitenwende highlight. The Chancellor and his colleagues have talked more than act. And what little they have done is almost inadequate to judge. According to a pair of researchers, the Scholz government “has yet to present any serious strategy or plan for the future of the Bundeswehr, the role Germany intends to play in European collective security, or the contribution of Germany’s improved military to warding off the Russian threat.” What, one wonders, have the denizens of Berlin been up to since the February 24 invasion?

As for the cash, the result is much the same, with increasing amounts of smoke and mirrors tossed in. According to the Wall Street Journal: “Hitting the 2 percent goal would mean annual defense spending of some €75 billion in the next fiscal year, but Mr. Scholz’s government has submitted a budget accounting for only €50 billion, roughly the same amount as before the ‘turning point.’ The plan seems to be to top up annual spending by including one-quarter of the special procurement budget.” But the latter money won’t cover maintenance and personnel and will run out naturally. This sounds like funding Washington-style.

Even the American Institute for Contemporary German Studies, normally a friend of Berlin, called out Scholz & Co. for a “sluggish start” and all manner of other deficiencies. Reinforcing the Journal’s assessment, AICGS warned: “Once the special fund is exhausted, the means to ensure that the Bundeswehr meets NATO capability goals will have to come from the regular budget. The next government would thus have to substantially raise the regular defense budget, which could conflict with the debt brake and competing policy priorities.” And who knows what the political environment will be then?

Alas, it’s not just Germany. The Biden administration’s willingness to bail out the allies, again, appears to have cooled the ardor of other governments to do more. No one expected Montenegro or North Macedonia to do much, but European heavyweights are doing little more. Spain shows little interest in the military; neither does Italy, which just lost its Euro-friendly government and faces elections. French President Emmanuel Macron’s party lost control of parliament.

Even Great Britain, in the final stages of installing a new Prime Minister, has disappointed. Deploying one of Europe’s two real militaries—Paris is the other—and sounding like Winston Churchill’s heir, promising to hike outlays to 2.5 percent of GDP, outgoing Prime Minister Boris Johnson proved to be just another faux warrior and PR blowhard. Explained the BBC, “the government is going to break the promise on defense spending that it made in its manifesto in 2019,” to hike annual outlays .5 percent above inflation. The premier refused to up expenditures this year, amid a bloody war, even though he was warned by Defense Secretary Ben Wallace that the military was living on “a diet of smoke and mirrors.” But then, Johnson knew he could still rely on the Yanks even while doing what the Europeans have done for years, abandoning promises to do more on their own behalf.

In fact, the problem runs deeper. There is little public support for doing more. European leaders continue to talk tough about supporting Ukraine against Russia, but European peoples are less enthused. A June study by the European Council on Foreign Relations (ECFR) discovered that a plurality of those polled desired to end the conflict to achieve peace rather than prosecute it to achieve justice. More significantly, an overall plurality opposed spending more on the military; national pluralities or majorities were against doing so in France, Great Britain, Italy, Portugal Romania, and Spain.

This persistent reliance on the US should come as no surprise. In 2020 the Pew Research Center asked Europeans if they favored defending one another. Overall, the continental result was 50 to 38 percent against. In only three of 13 European countries, Britain, Lithuania, and the Netherlands, did more people support fighting for their NATO allies than not. In eight nations a majority were opposed. In another two cases pluralities were against doing so. The share opposed hit 66 percent in Greece and 69 percent in Bulgaria. Yet in every country more Europeans believed the US would intervene to defend them, in most instances by a large majority. How convenient!

Allowing populous and prosperous states to forever leech off American taxpayers has long been unacceptable. A long succession of Presidents, Secretaries of Defense, and Secretaries of State have demanded, cajoled, whined, and begged US allies to do more, with little effect. Even after Moscow’s aggressive moves in 2014, the European reaction was limited, not the sort of serious move one would expect from peoples fearing for their independence and freedom. The Europeans haven’t spent enough. Equally important, they haven’t spent their money well. The result is continued reliance on America. Even today, in the aftermath of Russia’s attack on Ukraine.

It is time for Washington to say no more.

The good news is that the fevered apocalyptic scenarios of a Russian march to the Rhine, Seine, or even Atlantic, so often offered by advocates of ever-more US military spending, look like sci-fi fantasies after Moscow’s poor performance against Ukraine. If all Russia can do in six months of ponderous combat is expand its control of that nation’s Donbass, the not-so-Red Army redux is not going to be conquering the rest of Ukraine, let alone the rest of the continent. If countries on the frontline with Russia invested seriously in the military, spending not one or two percent of GDP, but the more than five percent typically spent by Israel, and fielded forces schooled in territorial defense, any Russian attack would be prohibitively expensive.

Of course, the decision is up to the Europeans. And if their first wave of anxiety has dissipated alongside Moscow’s failure to rapidly overrun Ukraine, so be it, as long as they don’t count on the US to put in more men and materiel, and forever protect, secure, and coddle countries and peoples unwilling to act on their own behalf. Washington is essentially bankrupt, the federal debt exceeds America’s GDP and is headed ever upward. Congress just passed another big-spending bill, spreading subsidies and favors far and wide to friendly political constituencies. The Pentagon is suffering through what appears likely to be its worst recruiting year in a half-century: Washington soon might not have anyone to deploy to Europe whatever the Biden administration’s wishes.

The Russo-Ukraine war is a disaster that appears likely to continue for months, and perhaps longer. Early on, a shocked Europe appeared ready to move forward, embracing the principle of self-defense and promising to do more on its own behalf. That commitment is now fading.

This requires the US to act. It no longer can afford to defend the world. Washington should announce that it will no longer treat its allies as helpless juveniles, forever doomed to be defense dependents. Given allied promises to do more, American forces should begin returning home at the end of the year, with the ultimate objective of bringing them down to zero. Washington should announce that it plans to focus on this nation’s social and economic needs, rather than the security interests of others.

FEEL FREE TO SHARE
Doug Bandow
Doug Bandow is a senior fellow at the Cato Institute, specializing in foreign policy and civil liberties. He worked as special assistant to President Ronald Reagan and editor of the political magazine Inquiry. He writes regularly for leading publications such as Fortune magazine, National Interest, the Wall Street Journal, and the Washington Times.