Tennis Chamption Novak Djokovic and the US Open: Let Him Play

Among the best tennis players of all time, and also possibly the healthiest human being on the planet who is obsessive-compulsive about his fitness, Djokovic was unable to play in the Australian Open because he refused to take a Covid vaccine. Now he faces the repeat prospect of the Biden administration barring him from entering to compete in the US Open, even though unvaccinated Americans can compete. 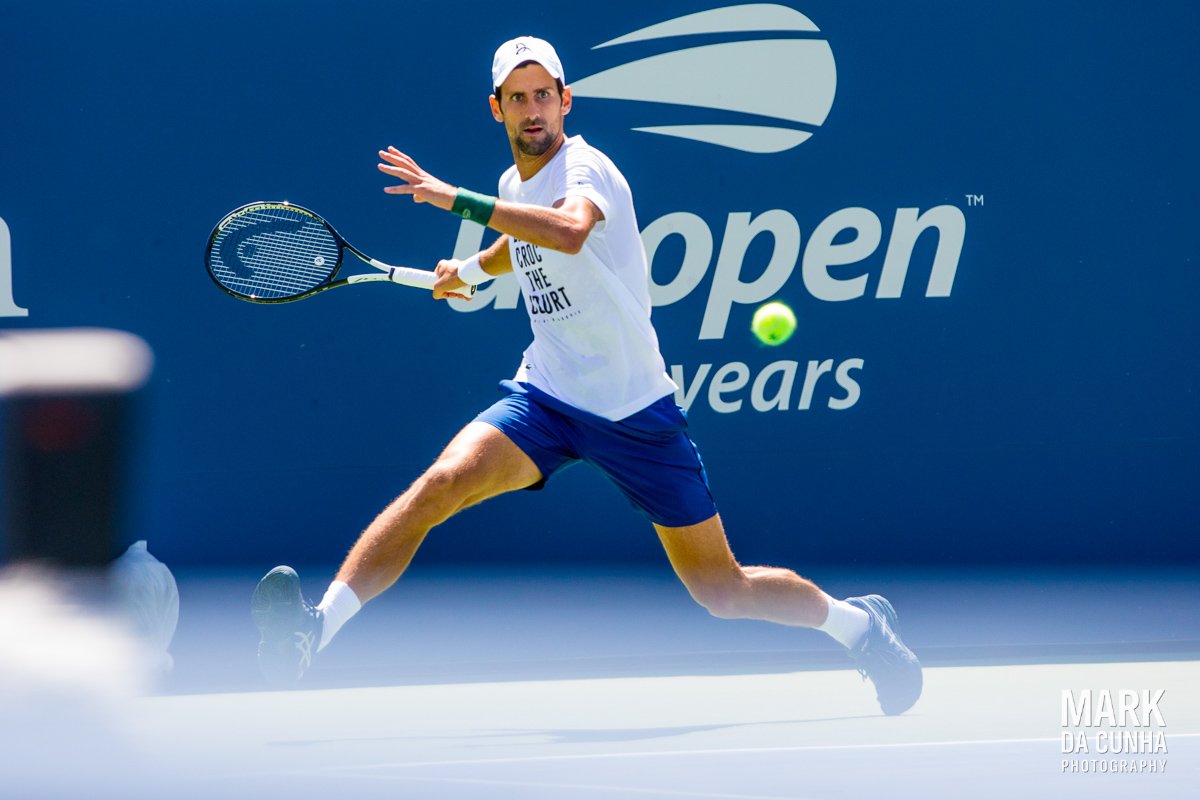 So Novak Djokovic has won Wimbledon, the second tennis major this year to be plagued by self-inflicted wounds following the Australian Open whose crown Djokovic was unceremoniously prevented from defending.

I concluded then that God must be a Djoker. How else to explain that banks that once feared masked robbers insisted on masked customers in 2020–21, Big Pharma blamed the failure of a product on those who refused to take it, and sporting bodies that banned drug-injecting competitors mandated a drug with no long-term safety data?

According to one site that tracks the adverse events associated with sportspeople, by mid-July 2022 1,174 athletes – by definition one of the fittest cohorts in society – had suffered cardiac arrests and other serious side effects, of whom 779 had died.

The claim that ‘No-vax’ Djokovic poses a threat to others’ health is risible. Among the best tennis players of all time, one of the greatest contemporary athletes across all sporting codes, and also possibly the healthiest human being on the planet who is obsessive-compulsive about his fitness, Djokovic was unable to play in the Australian Open because he refused to take a Covid vaccine.

Now he faces the repeat prospect of the Biden administration barring him from entering to compete in the US Open, even though unvaccinated Americans can compete.

That would be unfortunate. The vaccination mandate for international arrivals made little sense back in January and is now demonstrably reliant on voodoo science. Until the southern spring of 2021, belief in the efficacy of vaccines as the exit ramp from Covid seemed to be validated by the data. Hence the phrase “pandemic of the unvaccinated,” which made its inevitable way to Australia.

Yet by year’s end, it was abundantly clear that breakthrough infections of the highly contagious new Omicron variant were rampant around the world and had significantly breached the vaccination protective barrier. Omicron was first identified in November 2021 in South Africa.

Bizarrely, having shown themselves to be model international citizens in promptly notifying the world of this, unlike, say, China at the start of the Covid outbreak in 2020, South Africa was stigmatized by conflating first detection with place of origin of the Omicron variant.

Putting that aside, the key fact is that at that time, international travel was restricted to the double-vaccinated and everyone had to be masked in flight. Yet Omicron spread rapidly right around the world within two months, was quickly seeded in every continent, even Antarctica, and became the dominant variant, thereby blowing up the narrative that vaccination stopped transmission of the virus dead in its tracks.

As a CDC-supported study concluded in November 2021:

Now consider the little known but compelling case of the South Pacific island country Kiribati. As of January 18 this year, its total number of Covid cases since the pandemic started was just two. By February 7, the numbers had exploded to 1,744. The virus entered on a flight from Fiji on January 15.

All passengers were fully vaccinated, had repeatedly tested negative in pre-departure tests, were quarantined before and after travel, and were masked in flight. Despite the stringent precautions, most tested positive on arrival and the virus then spread quickly through the tiny island despite lockdown.

The daily new cases peaked on February 9 at 201 (7-day rolling average) and fell back to zero again by the end of March. The total number of Covid deaths hit 13 on March 8 with no further deaths since then.

Meanwhile, for all its boastful claims about having tamed Covid into submission, Australia has experienced an explosion in cases, hospitalizations, ICU admissions, and deaths this year, despite having reached 91 percent double-vaccination coverage of people over age 16 by the start of the year and 95 percent by mid-year.

There have been nearly four times as many Covid deaths in the first six months of 2022 as in the previous 24 months (Figure 1).

New Zealand’s fall from Covid grace is even more dramatic.

Both prove the truth of the early insistence by skeptics that “virus gonna virus,” governments could defer but not avoid its deadly toll, and long societal shutdowns would create an immunity debt from lack of exposure to commonly circulating pathogens. 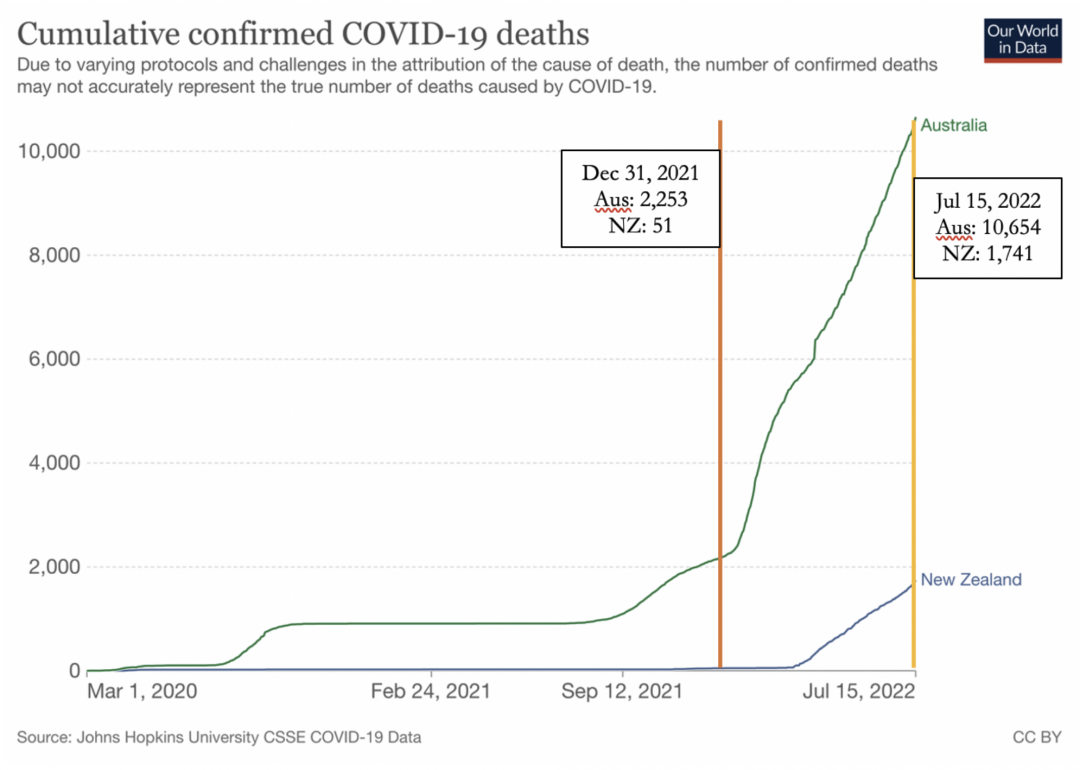 NSW has continued to provide detailed weekly reports on the status of Covid with helpful breakdowns by age group and vaccinations status. I’ve collated the reports for weeks ending April 2 to July 9, 2022. I had wanted to cover 15 weeks, from the week ending April 2 to July 9. Unfortunately, until the week ending May 21, the data lumped all unvaccinated and vaccination status unknown into one category.

Which casts deep doubts on the “science” behind the drive to vaccinate the young, a point that Drs. Marty Makary and Tracy Beth Høeg make so powerfully in their recent article for Bari Weiss’s Common Sense Substack site. 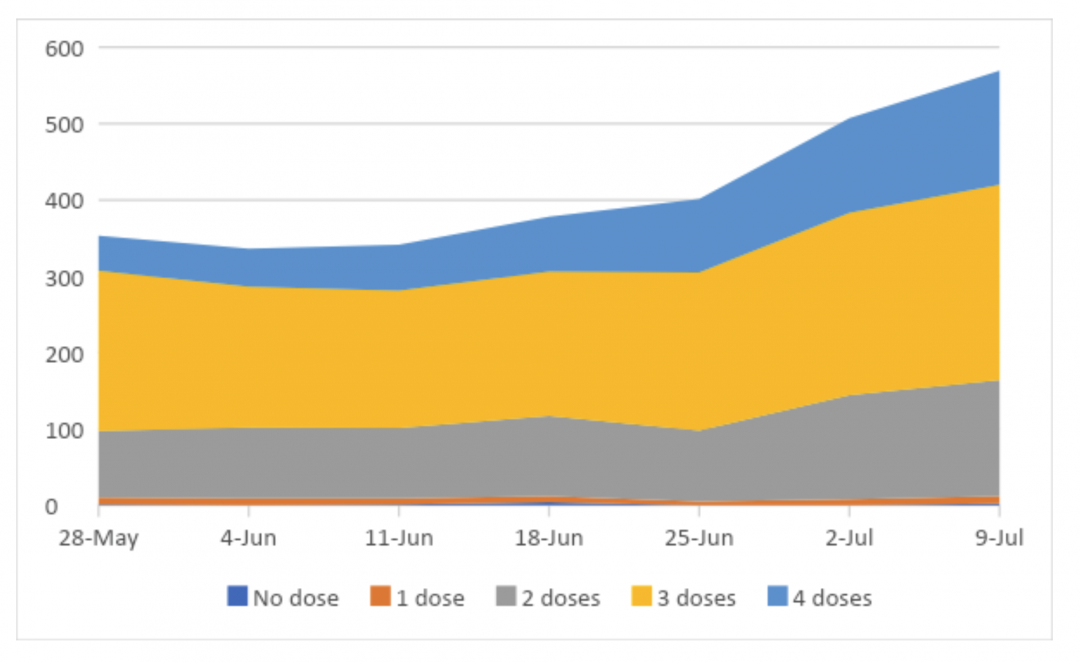 Claims that vaccinations help to reduce the strain on hospitals and significantly reduce mortality also seem to defy the data. In the seven-week period, of the 2,885 NSW residents admitted to hospital whose vaccination status was known, a grand total of 8 – that’s right, eight – were unvaccinated.

By contrast, a total of 2,820 – a whopping 97.7 percent! – were double-, triple- or quadruple-vaccinated (Figure 4). Remember, this is at a time when around 95 percent of people over 16 are at least double-vaccinated.

The Covid death toll is not quite so lopsided, but even there, vaccination provides limited protection. Of course, excluding those with unknown status also distorts the overall picture and the assumption that most of them are unvaccinated seems reasonable. But an assumption is not hard data.

Clearly, if unfortunately, the real-world performance of Covid vaccines has not been as brilliant as the enthusiasts, including the manufacturers, had led us to believe.

Martin Kulldorff, an early supporter of Covid vaccines, recently argued on this site that new studies raise serious questions about the mRNA vaccines. The manufacturers and the FDA have failed in their responsibility to address legitimate safety concerns. 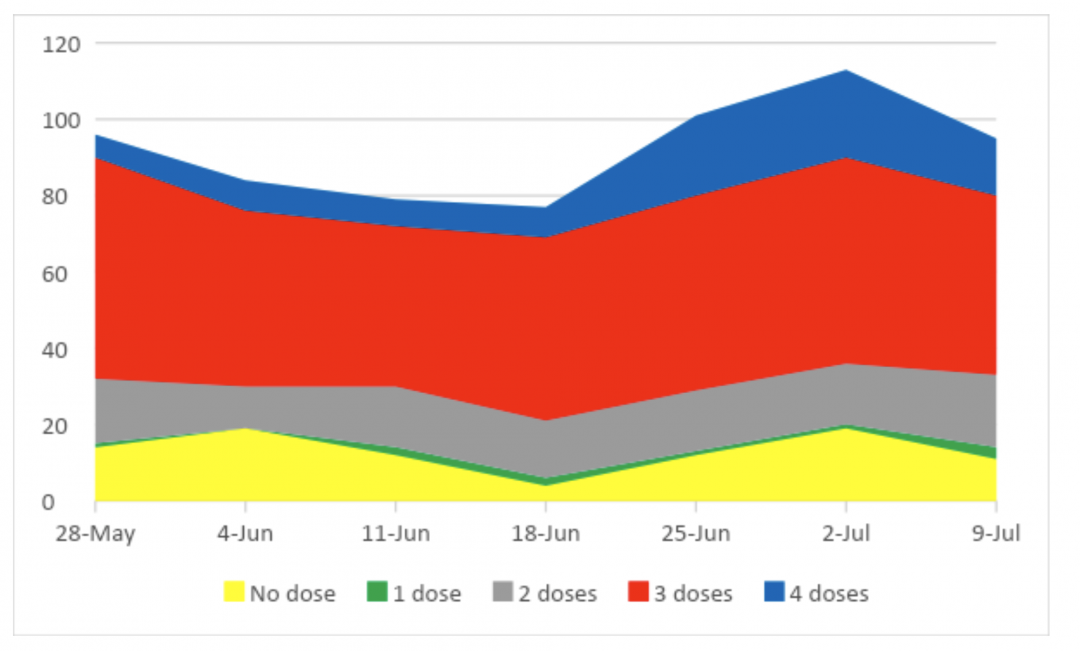 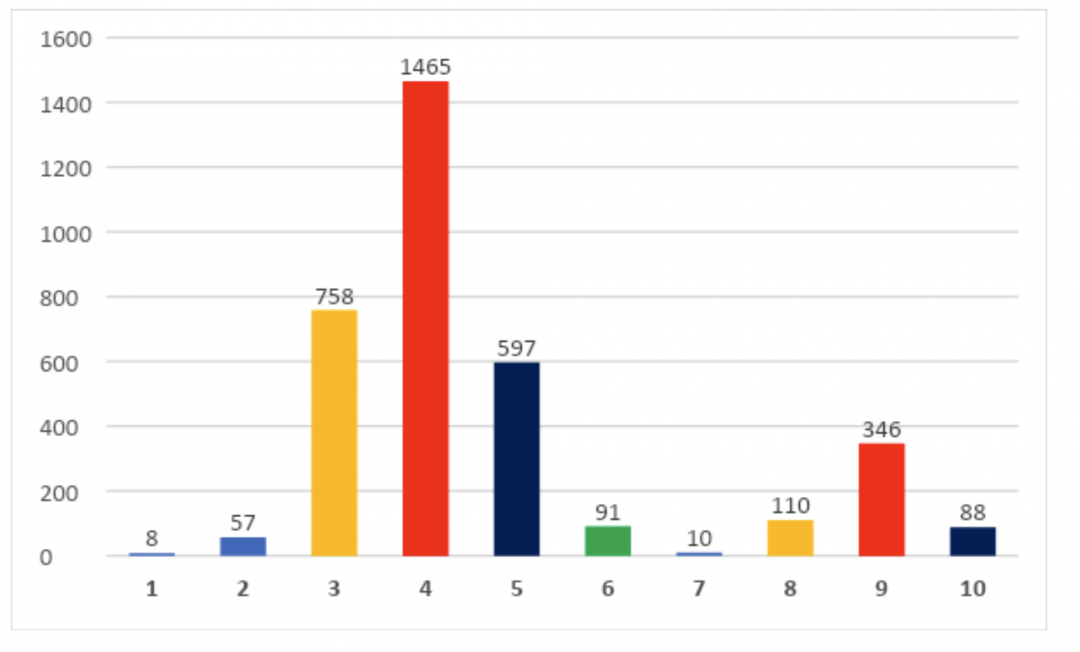 How any health official or minister can look at these four graphs and advise people with a straight face to get vaccinated and boosted is beyond my comprehension. Or, to put it another way, if this is evidence of vaccine success, what would be proof of vaccine failure?

It’s indisputable that vaccination does not provide protection against getting infected or infecting others. If health authorities were honest, then to be consistent with their 2021 messaging, they would now be using the language of the pandemic of the vaccinated.

The scale of the problem is such that suspicions arise that rapidly waning efficacy, especially after repeated boosters, might not be the only issue. In addition to the studiously ignored problem of adverse events, many serious and some fatal, could the vaccines themselves be sustaining and driving the pandemic?

Against this hard data that is now available, the decision in January to stop Djokovic from coming into Australia seems even more perverse. As a BBC analysis made clear, that decision was neither medical nor legal but political. A court overturned the entry ban on procedural and substantive grounds.

The government then made an end run around the legal system by relying on ministerial discretion that had deliberately been made nonjusticiable. Accepting that Djokovic posed “a negligible individual risk of transmitting Covid-19” to others, the minister nonetheless concluded that because Djokovic had a “well-known stance on vaccination,” his very presence could fuel anti-vaccination sentiment in Australia. Consequently, his participation was not in the public interest.

Thus Djokovic had to be kept out of Australia not because he could infect others but because he is a visible reminder of vaccine failure. The government was terrified that a twice-infected but unvaccinated Djokovic, showcasing his athletic prowess on the court to a record 21st Majors triumph, would bring to a shuddering halt the constantly escalating Covid terror.

The international humiliation inflicted so publicly on Djokovic in pursuit of vaccine apartheid was morally corrupt. It lacked both scientific justification and hard data in support. It indulged a government’s every illiberal instinct to control information and bully people into compliance.

As early as March 2020, New Zealand PM Jacinda Ardern infamously said: “We will continue to be your single source of truth.” She liked the line so much that she repeated it verbatim in July 2021 and Australia copied her.

More than authoritarian, it was totalitarian, in that it injected the state into the body of an individual in total repudiation of the principles of informed consent and “My body, my choice.” To the extent that the policy was enforced in my name as a citizen, I remain regretful, embarrassed, and ashamed.

This is why I would like to see Americans reject a repeat of the fiasco for the US Open but am not holding my breath. The capacity of authorities and governments to stubbornly – even cussedly – ignore facts, data, and evidence throughout the pandemic has been awe-inspiring. It’s an example of George Orwell’s bon mot, in an article in The Tribune on March 22, 1946: “To see what is in front of one’s nose needs a constant struggle.”