When bonds and stocks decline a lot and simultaneously it suggests inflation is rising rapidly even as the economy is stagnating or contracting (or will soon do so). For most economists today, that combination is near-impossible. 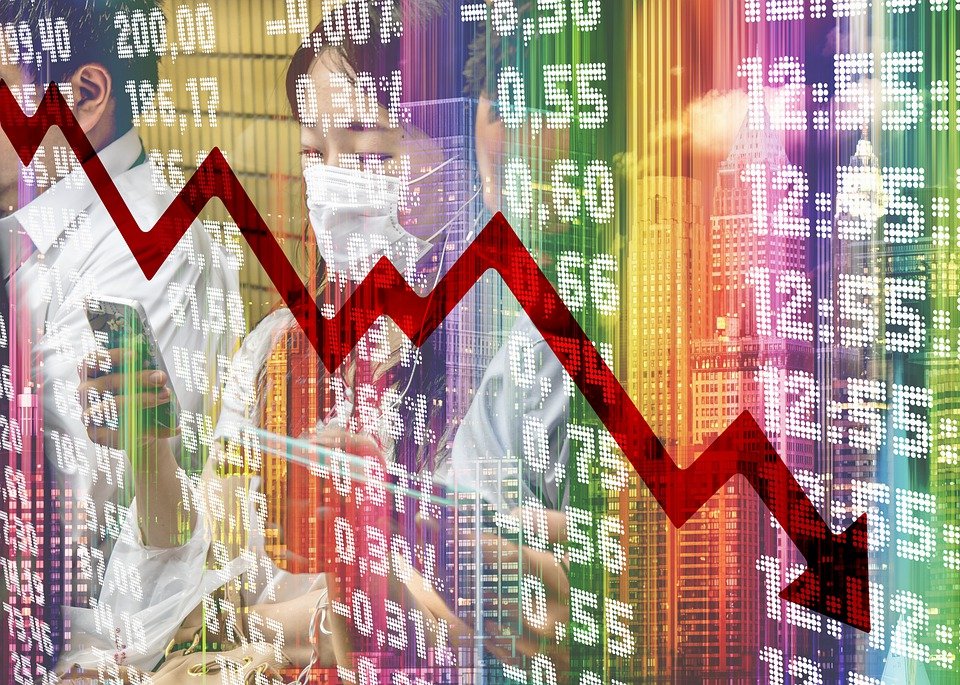 Returns on U.S. stocks and Treasury bonds have been materially and simultaneously negative so far this year, recording losses of 19.0 percent and 22.5 percent, respectively. This is an anomaly worth examining. Typically, sharp declines in risky equities coincide with solid gains in safe bonds.

A diversified portfolio – part stocks, part bonds – immunizes investors, to some extent, in bad economic times. If stocks plunge, at least bonds boom. But not this time. Why might this be?

Figure One illustrates how different recent investment performance has been compared to four prior episodes between 2007 and 2021. The S&P 500 is down 19.0 percent since last December’s peak, but the return on the benchmark U.S. T-Bond has been even worse (-22.5 percent). Bond prices move inversely with bond yields; the 10-year T-Bond yield has more than doubled over the past half year, from an average of 1.47 percent last December to an average of 3.15 percent so far this month. 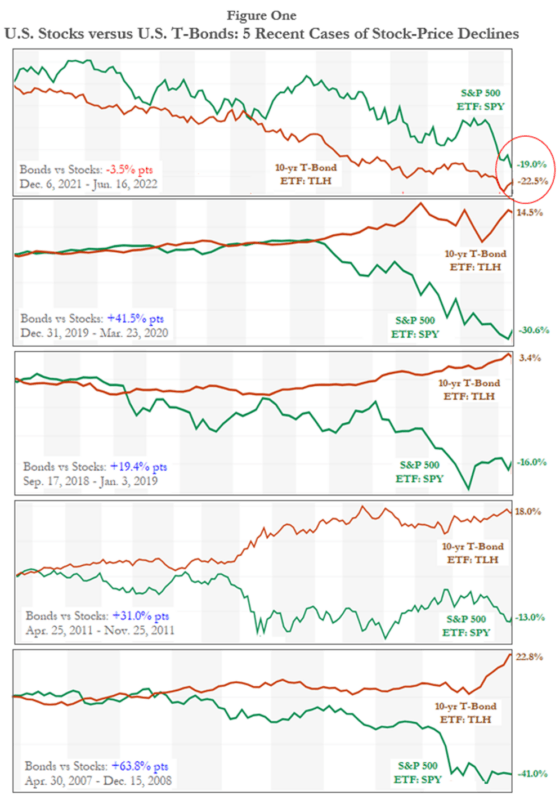 Also notice in Figure One that in the prior four episodes (2019-20, 2018-19, 2011, and 2007-08), while the S&P 500 plunged (by an average of -25.2 percent), T-Bonds gained rapidly (with an average return of +14.7 percent).  In these four episodes bonds always gained and outperformed stocks by an average of nearly 40 percentage points; in contrast, bonds over the past half year have lost value and have underperformed stocks by -3.5 percentage points.

The benchmark U.S. T-Bond yield has doubled over the past half year largely because the Federal Reserve has shifted its policy to rate-hiking. But the shift was a reaction to the higher rates of price inflation which the Fed itself substantially caused by instituting previously large increases in the money supply. The CPI rate is now 8.6 percent (the past year’s change through May), up from 4.9 percent over the prior year and a mere 0.2  during the previous year (through May 2020). Prior to the inflation acceleration, the Fed had increased the monetary base by 87 percent from the end of 2019 to the end of 2021 (after having reduced it by 11 percent over the prior two years); the Fed also increased M-2 by 40 percent in the two years ending 2021 (versus a rise of only 10 percent over the prior two years).

When bonds and stocks decline a lot and simultaneously it suggests inflation is rising rapidly even as the economy is stagnating or contracting (or will soon do so). For most economists today, that combination is near-impossible. Trained in Keynesian demand-side models – and taught to ignore or ridicule supply-side models – they deny that higher inflation is likely to accompany a weakening, let alone stagnating or contracting economy. That’s why they didn’t predict the recent inflation boom. First, they denied it would happen. Next, when it happened, they dismissed it as “transitory.” Now that it has persisted, they finger countless, irrelevant factors – leaving the Fed blameless. As inflation has risen lately, real GDP has contracted; it was down 1.5 percent in 1Q2022 and is flat so far in 2Q2022. Yet the Biden policy mix also does not prioritize economic growth.

We now have “stagflation,” which last appeared in the U.S.  in the late 1960s and the 1970s, before the supply-side cures of “Reaganomics.” Keynesian policies remained dominant in the 1960s and 1970s. If any group today should know about stagflation – how to cause and predict it – it would be a group of Keynesians. They were flummoxed by the earlier stagflation and demanded price controls. Monetarists were also confused. Like Keynesians, they had long opposed the gold standard, preferring fluctuating to fixed exchange rates. The monetarists got their wish in 1971 – and conditions only worsened over the subsequent decade. Both “sides” caused that stagflation.

The term “stagflation” was coined in 1965 by U.K. conservative politician Ian Macleod. He sought to describe a rare condition in which inflation was high even though the economy wasn’t growing (or worse, was in recession). Keynesian modelers – who denied that inflation was a debasement of money and rejected the principle that inflation is solely a monetary phenomenon – attributed universally fast-rising prices to real factors: “supply shocks,” and/or an economy that “grew too fast,” and/or a jobless rate that was “too low.”  After its coinage in 1965, the use of “stagflation” spread far beyond the U.K. to the U.S. and spread far into the 1970s, due mainly to the abandonment of the gold exchange standard (in August 1971).  Stagflation was eradicated for more than two decades only after supply-side polices were adopted, beginning in the early 1980s.

Table One illustrates the vast difference in economic-financial results attributable to demand-side Keynesian policies (1970s) versus supply-side Saysian policies (1980s).  In real terms both stocks and bonds lost ground in the 1970s, but both gained ground in the 1980s; in the latter case it helped that inflation decelerated from the prior decade. Economic growth rates weren’t so different between the two decades (due to the recessions of 1981-1982), but growth rates accelerated throughout the 1980s, after decelerating during the 1970s. Vigor displaced malaise.

Today we’re again seeing a diminution of economic vigor, not unlike the 1970s. Ample evidence over the years proves that as the U.S. government grows, prosperity necessarily slows. But it’s also true that by now many intellectuals, policymakers, politicians, and voters prefer less economic growth, a lesser “human footprint,” to the extent that growth coincides with unequal rewards and climate change. These have always been with us, but many people now prefer that they be curbed.

Beyond disdain for economic growth and its unavoidable, innocuous byproducts (income inequality, climate change), we observe in recent years a fringe bloc of economists pushing “Modern Monetary Theory” and convincing gullible policymakers, and pundits that governments can spend without limit (or reliance on higher taxes), that central banks can create money without limit (or higher inflation rates), and that finance ministers can issue public without limit (or higher interest rates). Only lately have such myths been doubted, albeit only a little bit.

By flooding the system in recent years with excessive government spending, fiat money, and public debt, U.S policymakers made higher subsequent inflation almost inevitable. Now, as the Fed tries to “fix” what it broke, it seeks to put a brake on the economy’s growth rate; so far, it has “succeeded,” as the U.S. economy has stalled. In time, the Fed’s rate-hiking could again invert the Treasury yield curve and trigger a recession. This is the only way a Keynes-driven Fed knows how to “fight inflation.” It’s futile, because relatively less production alone cannot reduce product prices.

I don’t expect Modern Monetary Theorists to apologize for having given such bad advice in recent years. They’re not necessarily done with advising. Their standard prescription for higher inflation is higher tax rates, a Hoover-like policy mix that, if adopted, could easily transform a mild and brief recession into a prolonged and deep depression.

The Benefits of Issuing Gold Bonds

There are simple and clear fiscal benefits to a government that issues a gold bond.