President Biden opposed constructing new pipelines in the United States beginning with his first day in office when he put a stop to the completion of the Keystone XL pipeline that could be bringing oil from Canada and the Bakken shale fields in North Dakota to U.S. refineries. But if the pipeline is not in the United States, Biden is amenable. Biden backed the Nord Stream 2 pipeline last summer and is now backing Canada providing a turbine to Russia to get Nord Stream 1 capable of operating at full capacity. The turbine was withheld due to sanctions against Russia for its invasion of Ukraine. Russia had used the part as a means to drop flows of natural gas to Europe to 40 percent of capacity.  Nord Stream 1 is now offline for its annual maintenance that should last 10 to 12 days, but Europeans are fearful that Russia will not restart it after maintenance is concluded.

Further complicating pipeline construction in the United States is the role of the Federal Energy Regulatory Commission (FERC) that has jurisdiction on natural gas pipelines.  During the first days of the Biden administration, the President embarked on his environmental goals, pushing FERC to consider changes to the way it reviews applications to approve and construct new natural gas infrastructure projects by addressing greenhouse gas emissions and environmental justice concerns in its decisions. Despite being an”independent agency,” FERC began a review of its policies for their compliance with his edict.

FERC Released a Significant Change to It Process

In February, FERC released a new certificate policy statement, which governs the process for approving new natural gas infrastructure projects. It also released an “interim” policy statement on how it will consider greenhouse gas emissions and climate change impacts from new natural gas infrastructure. FERC stated that it would apply the policy statements to both pending and new applications. The rules were made effective immediately without a comment period or transition schedule. However, after receiving backlash from Congress, FERC changed its issuances to “draft” policy statements rather than “interim” policy statements just over one month after their issuance and after Biden promised more U.S. LNG to Europe. Further, FERC made the policy change apply to new proposed projects, not to affect any pending projects.

The proposed revisions to the certificate policy statement are significant, having the potential to pause or stop the development of greenfield projects and major expansions. The draft certificate policy statement creates a great deal of uncertainty for developers, thereby delaying potential projects. For instance, FERC indicated that precedent agreements, which typically form the critical financial support for a new project, are not the sole factor and may not provide sufficient evidence to demonstrate the “need” for a new project. Instead, FERC intends to look for examples of the end-use of the natural gas as a major determining factor of whether the project is needed. In essence, FERC will decide whether they approve of the uses of the natural gas. The burden to provide specific end-user examples falls to the project applicant to show how the gas will be used to support a public interest determination. If the applicant does not include the information, or if FERC deems the information to be insufficient to demonstrate project need, FERC could deny certification of the project.  This enormous increase in discretionary authority proposed by FERC, while good for lawyers and lobbyists specializing in FERC cases, promises a much more costly regulatory framework, which will inevitably increase costs of pipeline construction.

Thus, FERC may deny an application as a result of any type of adverse interest. Applicants may also need to propose mitigation measures for any adverse impacts, which includes engaging with interested landowners and for developers to continue to evaluate landowner input during the life of a project.

There is no timeline by which FERC must act, leaving some developers to question the viability of any new natural gas infrastructure projects.

In addition to changes to permitting policies, existing natural gas pipelines and infrastructure are seeing an increase in enforcement actions by FERC. According to FERC Chairman Richard Glick, the holder of a certificate must satisfy and fully comply with each and every condition in the certificate. Failure to adequately fulfill those responsibilities may result in (1) a referral to FERC Office of Enforcement for investigation and potential assessment of civil penalties and other remedies, and/or (2) the revocation of the certificate of public convenience and necessity. 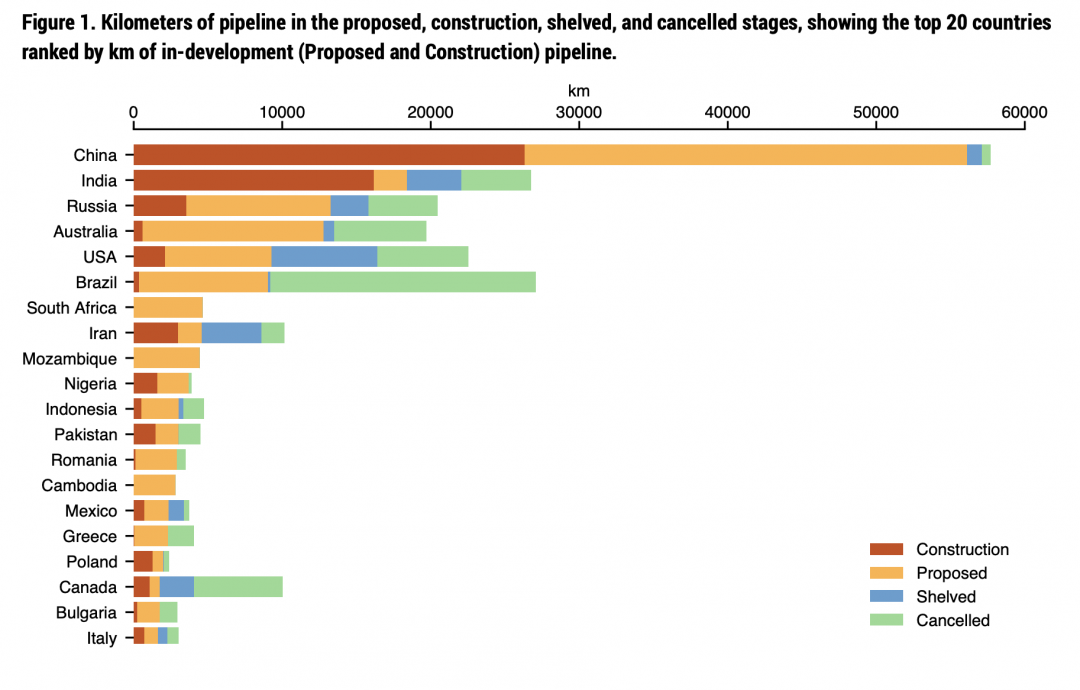 The Chinese pipeline boom is under the direction of the newly created Pipe China—the world’s second-largest developer of natural gas pipelines behind Russia’s Gazprom. The newly formed company is receiving support from U.S. banks that are not investing in fossil fuel projects in their own country.  In the United States, rising opposition from environmentalists, and a shifting legal and regulatory landscape as described above, contributed to the cancellation of some major pipelines in 2020 and 2021.

President Biden has pledged to send more natural gas to Europe to help reduce the continent’s reliance on Russian energy supplies. During the first four months of 2022, the United States exported 74 percent of its LNG to Europe, compared with an annual average of 34 percent last year. But, Biden’s promises may be unfulfilled if the regulatory structure FERC is proposing comes to be and LNG export terminals cannot get the natural gas they need due to lack of infrastructure. The demands that FERC is placing on pipeline developers is significant and with no timeline, the uncertainty created is delaying new projects that are needed for both export and domestic purposes at a time when the administration is using every tool in its “whole of government” approach to make domestic energy harder to finance, produce, transport and consume.

While Biden has ordered his federal agencies to deal with climate change in the policies under their authorization, including pipeline projects, he has supported pipeline projects abroad, including Nord Stream 1 and 2. Despite sanctions on Russia for its invasion of Ukraine, Biden is supporting Canada’s shipment of a turbine to Russia for its Nord Stream 1 pipeline to reach full capacity. Whether Russia will open it to full capacity after installing the turbine and addressing its annual maintenance is unknown.