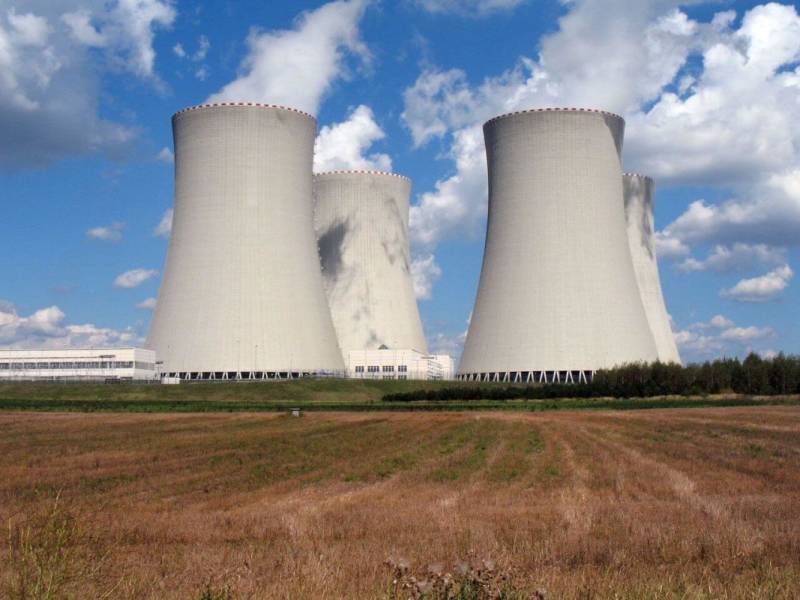 Uranium prices have increased 30 percent since the Russian invasion of Ukraine started, as Russia supplies 35 percent of the world’s enriched uranium. Russia enriches more uranium for use in nuclear plants than any other country in the world. Because of the complex supply chain for processed uranium, however, no other country could quickly fill Russia’s supply. Because U.S. nuclear plants typically refuel every 18 to 24 months and plan refueling at least two to three years in advance, there is little immediate concern of a short-term fuel shortage for existing U.S. nuclear plants. Nuclear power provides about 20 percent of U.S. electricity generation—more than wind and solar generation combined—and 10 percent of the world’s electricity generation. In 2020, the U.S. relied on Russia and its allies Kazakhstan and Uzbekistan for 46 percent of its enriched uranium needs. A trade agreement limits U.S. dependence on Russian uranium to no more than about 20 percent of what U.S. reactors need.

The U.S. Energy Department and some utilities or suppliers keep small stockpiles of uranium, which could help offset potential disruptions. Constellation Energy Corp, which operates the nation’s largest fleet of nuclear-power plants, could meet refueling needs for several years regardless of potential sanctions. Nevertheless, Constellation and some of its peers are pressing for greater domestic investment in the fuel process, noting long investment lead times are needed. “The reality is that there are a limited number of firms around the world that provide certain nuclear-fuel services,” said Constellation spokesman Paul Adams.

While uranium can be mined in many parts of the world, the multistep processing that turns the heavy metal into a fuel is concentrated in a handful of places globally. Uranium must be mined and milled, converted into a gas, and enriched to increase the percentage of the isotope needed for nuclear reactors before fuel fabrication. Each step occurs in specialized facilities. As the U.S. nuclear industry is retiring plants, there has been little reason for U.S. companies to invest in uranium facilities and raw uranium prices have not been high enough to encourage U.S. mining over cheaper imports. Besides Russia, the only commercial uranium conversion plants are in France and Canada. China has uranium conversion and enrichment plants but tends to supply its own reactors instead of exporting to other countries.

The following infographic illustrates the stages in the nuclear fuel cycle, which include uranium recovery, conversion, enrichment, and fabrication, to produce fuel for nuclear reactors. Uranium is recovered or extracted from ore, converted, and enriched. Then, the enriched uranium is manufactured into pellets. These pellets are placed into fuel assemblies to power nuclear reactors. Reprocessing of spent nuclear fuel, including mixed-oxide (MOX) fuel, is not practiced in the United States. 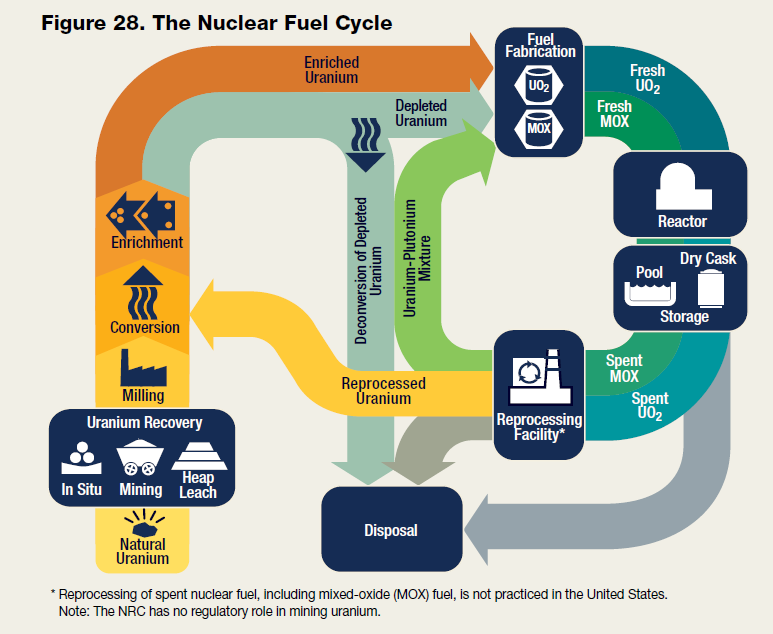 The only U.S. conversion plant is in Illinois, which has been idled since 2018, but is scheduled to come online again in 2023, according to its owner Honeywell International Inc. In March 2020, the plant received the Nuclear Regulatory Commission’s (NRC’s) approval to run for 40 more years. The plant was a focus in a landmark strategy released in April 2020 by the Trump administration’s White House’s Nuclear Fuel Working Group (NFWG). The three-pronged strategy sought to revive domestic nuclear fuel production along with its nuclear fuel supply chain.

The Illinois facility began converting uranium ore concentrates—known as “yellowcake”—to uranium hexafluoride (UF6) for commercial purposes in 1968. The facility obtains uranium oxide from mills and in-situ recovery facilities and converts it to UF6, which is then transported to other facilities to be enriched and subsequently made into fuel for use in commercial nuclear power reactors. Because of nuclear retirements and idled plants in Japan and Germany after the Fukushima accident, Honeywell temporarily idled UF6 production at the site in 2018 and cut its full-time workforce by 170 positions due to an oversupply of UF6. It was maintaining minimal operations to support a future restart “should business conditions improve.” The facility was upgraded to comply with post-Fukushima NRC standards to withstand tornadoes and earthquakes between 2012 and 2013.

According to the Energy Information Administration, in 2019, the nation produced 173,875 pounds of domestic uranium concentrate (U3O8)—the lowest annual production amount since before 1949. At the end of 2019, only four domestic in-situ recovery (ISR) plants were operating (all in Wyoming) and three domestic conventional uranium mills were on standby. The last domestic uranium enrichment plant that could meet U.S. national security requirements was built in the 1950s and shut down in 2013. 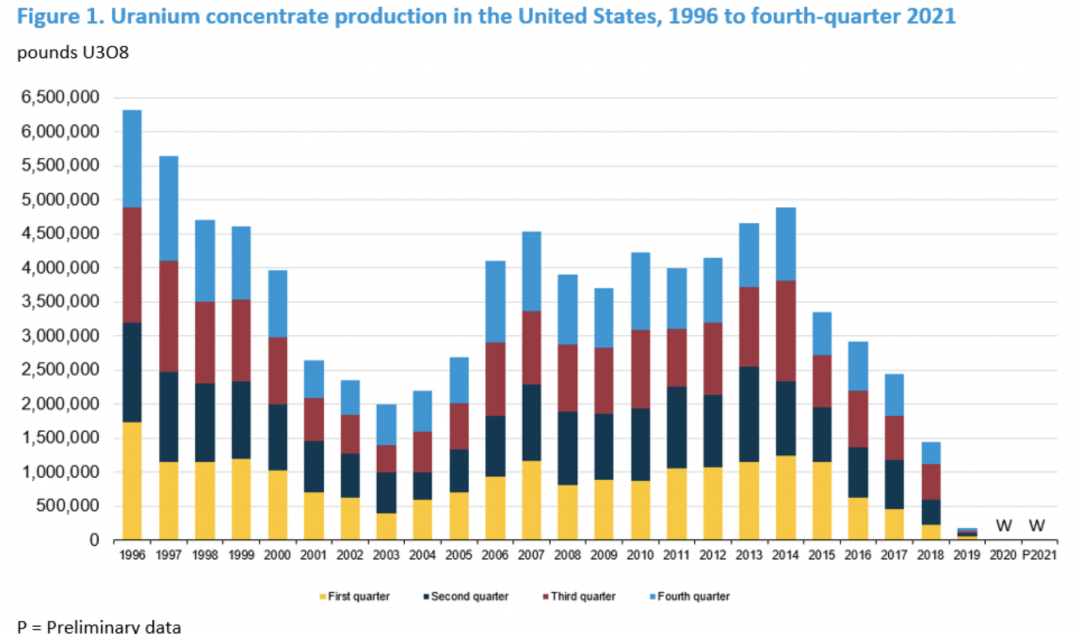 Uncertainty over securing future nuclear-fuel supplies raises questions for developers designing small modular reactors, or SMRs. Though none are under construction yet in the United States, many proponents of nuclear generation consider SMRs the future of the industry. SMRs would produce up to 300 megawatts of power, compared with more than 1,000 megawatts for the larger nuclear power plants now in operation. Because the devices are modular, many of their components can be mass-produced in factories rather than being constructed on site and SMRs could be combined in increments to boost capacity.

Mini reactors could play a role in the transition to a non-carbon energy grid, a goal of President Biden’s, since SMRs have the ability to “load follow,” or ramp up and down to match electricity demand throughout the day, which makes them a good partner for intermittent renewables (solar and wind), whose output is dependent on weather conditions and time of day. Development of SMRs is backed by the U.S. Energy Department, which is expected to invest $3.2 billion over seven years. Russia was considered the chief supplier of enriched uranium for these projects before the war, but developers may now have to look elsewhere.

Nuclear power could be a complement to intermittent solar and wind power if developers could reduce its costs since nuclear plants can be controlled by the grid operator where wind and solar power cannot. The U.S. Department of Energy is supporting the development of small modular reactors that are expected to cost less than large nuclear plants. As with all energy, government policy should prioritize a nuclear fuel supply chain that begins with American uranium and ends with American fuel, given that we have the uranium resources in abundance.  Otherwise, America’s energy security and national security is reliant on fuel supplies from Russia or other potential enemies.