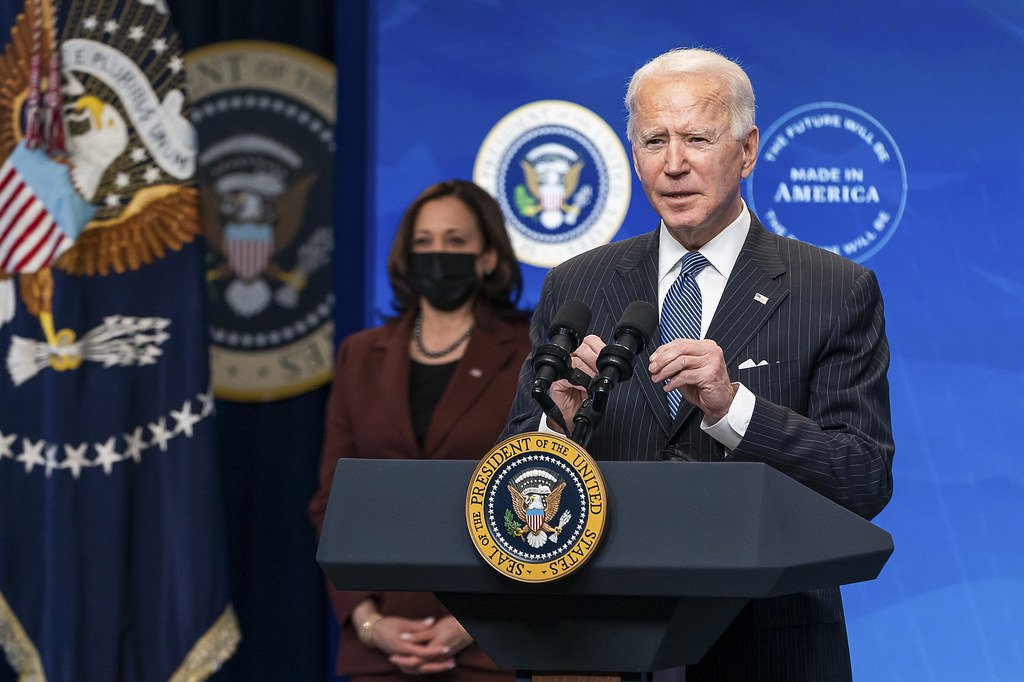 The Biden administration, and especially Press Secretary Jen Psaki, want Americans to believe that they are doing everything they can to lower gasoline prices. But, they are being dishonest. From Biden’s first day in office when he canceled the permit for the Keystone XL pipeline, his Administration has taken steps to increase gasoline prices that currently average over $4 a gallon across the nation. From December 2020 through March 2022, U.S. monthly average unleaded regular gasoline prices doubled. While Biden and his press secretary want to blame the increase on the Russian invasion of Ukraine, gasoline prices were already over $3.50 a gallon before the war even started. 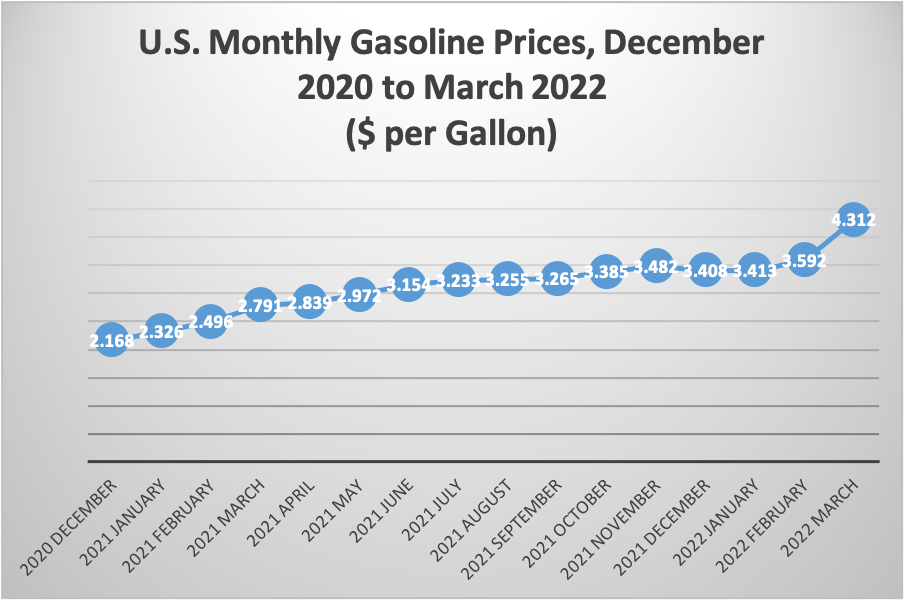 On January 20, 2021, besides canceling the Keystone XL pipeline, President Biden restricted domestic production by issuing a moratorium on all oil and natural gas leasing activities in the Arctic National Wildlife Refuge. He also restored and expanded the use of the social cost of carbon metric to artificially increase the regulatory costs of energy production of fossil fuels when performing analyses, as well as artificially increasing the so-called “benefits” of decreasing production.

On January 27, 2021, Biden issued an executive order announcing a moratorium on new oil and gas leases on public lands or in offshore waters and reconsideration of Federal oil and gas permitting and leasing practices. He directed his Department of Interior to conduct a review of permitting and leasing policies. Also, by Executive Order, Biden directed agencies to eliminate Federal fossil fuel subsidies wherever possible, disadvantaging oil and natural gas compared to other resources that receive Federal subsidies.

By the end of January 2021, average gasoline prices were 7 percent higher than in December 2020 averaging $2.326 a gallon for the month.

On February 19, 2021, Biden officially rejoined the Paris Climate Agreement, which is detrimental to American fossil energy, while propping up oil production in Russia and OPEC and increasing the dependence of Europe on Russian oil and natural gas. It also benefits China, who dominates the supply chain for critical minerals that are needed for wind turbines, solar panels, and electric vehicle batteries.

On March 15, 2021, Biden’s Securities and Exchange Commission sought input regarding the possibility of a rule that would require hundreds of businesses to measure and disclose greenhouse gas emissions in a standardized way, hugely increasing the environmental costs of compliance and disincentivizing oil and gas production.

On April 16, 2021, at Biden’s Direction, Secretary of the Interior Deb Haaland revoked policies in Secretarial Order 3398 established by the Trump Administration including setting “American Energy Independence” as a goal; establishing an “America-First Offshore Energy Strategy;” “Strengthening the Department of the Interior’s Energy Portfolio;” and establishing the “Executive Committee for Expedited Permitting;” among them.  These actions set the stage for the unprecedented slowdown in energy activity by the Department of Interior, steward of 2.46 billion acres of federal mineral estate and all of its energy and mineral resources.

On April 22, 2021, Biden issued the U.S. International Climate Finance Plan to funnel international financing toward green industries and away from oil and gas.

On May 20, 2021, Biden issued an executive order on Climate Related Financial Risk would artificially increase regulatory burdens on the oil and gas industry by increasing the “risk” the federal government undertakes in doing business with them.

On June 1, 2021, Biden’s Department of Interior suspended drilling leases in the Arctic National Wildlife Refuge until the agency completes an environmental analysis of the impact and a legal review of the Trump administration’s decision to grant those leases.

On July 23, 2021, Biden’s Department of Justice issued its Climate Action Plan, including an effort to “green” the fleet by transitioning to electric vehicles.

By the end of July 2021, average national gasoline prices were 49 percent higher than December 2020, averaging $3.233 a gallon for the month.

On August 5, 2021, Biden issued an executive order on “Clean Cars and Trucks” that established a new target to make half of all new vehicles sold in 2030 zero-emissions vehicles, including battery-electric, plug-in hybrid electric, or fuel cell electric vehicles. The Executive Order also kicked off the development of more stringent long-term fuel efficiency and emissions standards. On the same day, EPA issued its Clean Trucks Plan, announcing plans for further transportation emissions regulations targeted at heavy-duty trucks, aiming to shift markets in favor of zero-emission vehicles.

By the end of August 2021, average national gasoline prices were 50 percent higher than December 2020, averaging $3.255 a gallon for the month.

By the end of September 2021, average national gasoline prices were 51 percent higher than December 2020, averaging $3.265 a gallon for the month.

On October 29, 2021, the Bureau of Land Management announced the use of social costs of carbon in decision-making for approving permits for oil and gas drilling.

On October 30, 2021, the Department of Labor issued a final ESG Rule that would require fiduciaries to consider the economic effects of climate change and other so-called environmental, social, and governance (ESG) factors when evaluating funds for retirement plans. The rule would strongly encourage fiduciaries to draw capital from domestic energy development in oil and natural gas to renewables.

By the end of October 2021, average national gasoline prices were 56 percent higher than December 2020, averaging $3.385 a gallon for the month.

On November 2, 2021, Biden administration led a “Global Methane Pledge” to reduce global methane emissions by 30 percent by 2030. Neither Russia nor China signed the pledge, increasing the world’s reliance on these two countries for energy-related imports and disadvantaging the U.S. oil and natural gas industry.

On November 15, 2021, Biden’s Department of Interior announced plans to withdraw Chaco Canyon from oil and gas drilling for 20 years.

On November 19, 2021, Biden endorsed several oil and gas provisions in the Build Back Better Bill, including a new tax on methane, of up to $1500 per ton; prohibiting energy production in the Arctic and offshore leasing on the Outer Continental Shelf (OCS) in the Atlantic, Pacific and Eastern Gulf of Mexico Planning Areas; increased fees and royalties for onshore and offshore oil and gas production; a new $8 billion tax on companies that produce, process, transmit or store oil and natural gas starting in 2023;  limited ability of energy producers to claim tax credits for upfront and royalty payments in foreign countries – amounting to a tax increase on domestic energy producers; and a 16.4 cent tax on each barrel on crude oil – up from 9.7 cents – a $13 billion tax increase on oil production.

On November 26, 2021, Biden’s Department of Interior issued its report on the Federal Oil and Gas Leasing Program includes recommendations to raise rents and royalty rates on oil and gas producers.

By the end of November 2021, average national gasoline prices were 61 percent higher than December 2020, averaging $3.482 a gallon for the month.

On December 8, 2021, Biden issued an executive order on a Clean Energy Economy that would artificially incentivize a push for a 100 percent electric vehicle fleet by 2035 including light vehicles by 2027, carbon-free electricity government-wide by 2030, and net-zero “federal operations” by 2050.

On December 21, 2021, Biden’s Department of Transportation issued its Final Rule revoking Trump era actions which prevented California from arbitrarily becoming the national standard for fuel emissions. The rule set the stage for the administration to reinstate California’s waiver, and, since automakers do not make different cars for different states, the rule would allow California’s radical environmental policies to reach nationwide.

On December 30, 2021, Biden’s EPA issued its Final Rule for increased “fuel efficiency standards.” According to the Final Rule, “These standards are the strongest vehicle emissions standards ever established for the light-duty vehicle sector. The rule, in responding to comments, claims “energy security benefits to the U.S. from decreased exposure to volatile world oil prices” suggesting that decreasing oil and gas production in the U.S. will result in less exposure to the international oil and gas market because they will be disincentivizing vehicles that use oil and gas. The rule also claims that it will result in “fuel savings” entirely due to less use of fuel.

By the end of December 2021, average national gasoline prices were 57 percent higher than December 2020, averaging $3.413 a gallon for the month.

On January 14, 2021, Biden nominated Sarah Raskin to serve as Vice Chair of the Federal Reserve. She was deemed so radical on her belief that fed policy should be dictated by environmental policy that she gained a bipartisan opposition and had to withdraw her nomination.

By the end of January 2022, average national gasoline prices were 57 percent higher than December 2020, averaging $3.413 a gallon for the month.

On February 21, 2022, the Biden administration paused working all new oil and gas leases on Federal land in response to a judge blocking their arbitrary use of social costs of carbon, unnecessarily hurting domestic oil and gas production.

On February 28, 2022, the Ozone Transport Proposed Rule would expand federal emissions regulations over a wider geographic region and over a wider array of sources, including the gathering, boosting and transmission segments of the oil and gas sector. Integral energy production states like Nevada, Utah and Wyoming would be required to jump through more red tape.

Russia invaded the Ukraine on February 24, 2022. At that point in time, gasoline prices in the United States were over $3.50 a gallon–over a dollar more a gallon than when Biden took office on January 20, 2021– and inching up. At the end of March 2022, gasoline prices averaged $4.312 a gallon for the month. But, Biden continued his war on the oil and gas industry in March by refusing to appeal an unprecedented decision to vacate an offshore oil and gas leasing sale held in November 2021; allowing EPA to reinstate California’s emissions waivers that allow the state to set its own greenhouse gas emissions standards, which will likely be adopted nationwide and are sure to make oil and gas vehicles more expensive; and continuing with SEC’s proposed rule that would require public companies to disclose greenhouse gas emissions and their exposure to climate change, massively increasing environmental costs of compliance and disincentivizing oil and gas production. President Biden’s actions have increased weakness in the United States’ energy policy and harmed consumers reeling from higher prices. The record is clear, even if the explanations of the White House are not.