Why I Support The Canadian Freedom Protests

"A dictatorship has to be capricious; it has to rule by means of the unexpected, the incomprehensible, the wantonly irrational..." - Ayn Rand 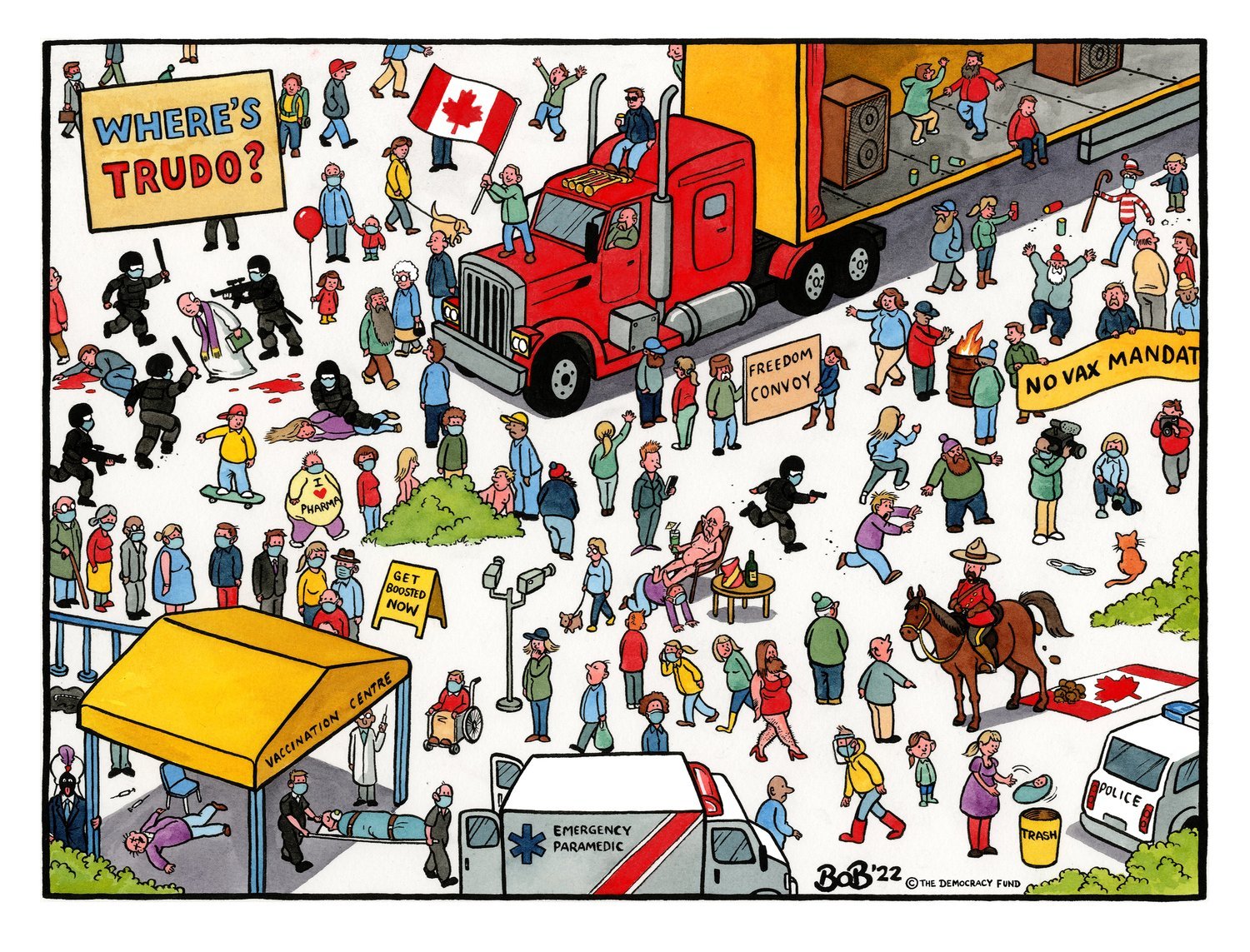 There’s a divided opinion about whether the freedom convoy is good or bad, legitimate or illegal, among rational and freedom-loving individuals. Who’s right? How is it that good, rational, freedom-loving individuals have come to completely opposite evaluations of the protests? In reading various opinions, and discussing the matter with people with whom I disagree, I believe a large part of the divide stems from the various contexts people are looking at or missing. I’m going to try to bridge that context gap below, and share my stance at the end.

Here’s a list of inhumane (not proper to an individual) treatment of Canadians by our government. Any single one of these transgressions would justify self-defense, whether through the courts or through constitutionally protected protest. The list isn’t in any particular order, and it’s not exhaustive, but it should serve to give you a very good idea of what the unvaccinated have been going through.

#CityofTO has launched an online system where residents can report issues of #COVID19 non-compliance, including individuals not self-isolating and operation of non-essential businesses and construction sites. Submit a report: https://t.co/1jQRQWhCu6

The Canadian Government’s Assault on Freedom of Speech

Every fundamental principle of a peaceful and just society is being attacked in our current political pandemic; life, liberty, property, and the pursuit of happiness have all been under siege. The most obvious forms are bodily autonomy, freedom of association, freedom of movement, freedom of speech.

The Canadian Government’s Assault on the Mind

And if all of that weren’t enough, let’s not forget the psychologically negative impact that all of the restrictions have on a person. Try to put yourself in the shoes of someone being thwarted from participating in society for choosing not to get jabbed, or rejecting the third jab.

Imagine you’ve been terminated from your job and know that you have a slim chance of finding a new one. You’re denied the unemployment insurance taken off each of your paychecks. You’re not sure whether the medical system you’ve paid into all of your life will take care of you should you or your family need it. Wondering how long your savings will last.

“Taking Up Space” and Unknown “Consequences”

We’re a small group, but “we’re taking up space” said Trudeau.[19] Does this mean that maybe tomorrow you’ll not be permitted to enter a retail or grocery store?

The non-vaccinated we’re given a stern threat of “there will be consequences” if you don’t comply. [20]

Does that mean that your bank account will be frozen? What about your mortgage? Cut off from utilities? Will your children be taken away from you? Does it mean that you’ll be forcibly removed from your home and put in a camp? They said vaccine compliance passports would never happen, but here they are. Warnings of such forms of control were dismissed as “conspiracy theories”. Now they are here. They said healthcare would never be denied, but that wasn’t true either. How far will Canadians permit things to go?

“It is a grave error to suppose that a dictatorship rules a nation by means of strict, rigid laws which are obeyed and enforced with rigorous, military precision. Such a rule would be evil, but almost bearable; men could endure the harshest edicts, provided these edicts were known, specific and stable; it is not the known that breaks men’s spirits, but the unpredictable. A dictatorship has to be capricious; it has to rule by means of the unexpected, the incomprehensible, the wantonly irrational; it has to deal not in death, but in sudden death; a state of chronic uncertainty is what men are psychologically unable to bear.”[21]

For those of us who made a decision about our personal risks and health concerns, all of these thoughts have and continue to cross our minds. That’s the reality that we’ve been facing for nearly two years.

Vaccination as an act of self-sacrifice

Then there’s the constant barrage of pleas to get vaccinated regardless of your particular circumstance, health status, and other considerations. It’s coming from the random folks we pass in public, it’s on signs all over the city, from every form of media, our former employers, at the family dinner table (assuming they still invite you). And the busy-body “Karens” who make it their mission to make you feel as uncomfortable as possible when the opportunity presents itself.[22]

All of this has the effect of some kind of PsyOp. It’s a nonstop bombardment insisting that you give in for the greater good because we’re all in this together.[23]

As someone who has suffered through all of these restrictions and threats, I prepared myself and my family for all of these possibilities. My life shifted from focusing on flourishing to figuring out how to survive this oppressive government.

Some freedom lovers who decided it was best for them to get vaccinated have no idea what the rest of us have been going through. You’ve been locked down too, but you’ve not felt the brunt of these restrictions on your life, livelihood, and liberty, and you’ve not had to prepare for the worst as we have.

Where’s the media in all of this? The hardships you’re facing are not being discussed or reported, and your personal posts about his sort of stuff don’t reach very far before they’re taken down.

Did you know that there has been at least one protest in Toronto every single week since the initial lockdown? Try to google it. You won’t find anything. That’s because the traditional media seems to refuse to cover the protests except for on a handful of occasions. In fact, the protesters made it a point to host a few of their protests right in front of the government-subsidized Canadian Broadcasting Corporation (CBC) and CTV filming studios (the largest broadcasters in Canada).[24] Prominent Canadians, including politicians, active Royal Canadian Mounted Police officers (federal police), constitutional lawyers, and even previously arrested priests attended and gave speeches. Still, no mainstream reporters covered it. They even chanted “tell the truth” for 10 minutes right outside their buildings. Silence. What about all of the protests worldwide happening daily? The worldwide number of protestors is in the millions, but there’s no coverage.

Freedom protest is a form of self-defense

With that background, what’s my opinion of the Freedom Convoy to Ottawa, and the protesters who started their journey to the Capital of Canada on January 22nd, and who’ve been there since January 29th until now?

Are they just a bunch of anti-science, “misogynistic”, “racists” that “take up space,” upset about a policy, who are recklessly killing the economy, blocking certain streets so “innocent” people take longer to get to where they are going, illegally terrorizing and holding the city hostage… as some have described them?[25]

Why are these protesters willing to protest for weeks in the cold, be fined, jailed, have their bank accounts frozen, and what’s left of their lives be destroyed? After all, it’s just a policy. Right?

I’ll spell it out if it’s not clear already. Conscientious people are being forbidden from participating in society; they are being forced out of work, and their lives are being uprooted and destroyed. The protesters are acting in self-defense. The aggressor is Justin Trudeau’s government and his provincial lackeys. To blame the protesters for the blockades is to blame the victim. The protesters aren’t asking for handouts or favors. They are demanding that their bodily autonomy and freedom be respected. They are demanding to be treated as individuals ought to be.

The people on the ground aren’t just truckers. The truckers were the catalyst that stood up for what should have been done long ago. This is also why there’s an emphasis to call it the Freedom Convoy, not the Truckers Convoy; it’s much broader than just truckers. Today we see people from all walks of life, from every part of the country, from every profession, both vaccinated and unvaccinated, congregating in Ottawa for the cause of freedom.

But what about the sleepless Ottawans inconvenienced by the protests? My answer to that is that the purpose of the protest was clear before it reached Ottawa. Remove all restrictions and the vaccine passport, return to normal, respect our bodily autonomy. Treat us as a human ought to be treated. This is a war on the individual that was started by the Canadian government and could have been stopped by the government. We’re four weeks in and Trudeau’s approach has been to further escalate the situation. The aggressor is Trudeau, and the sleeplessness and inconvenience are on him, not the victims.

An oppressive government is empowered by its citizens

An oppressive government is empowered by its citizens. To the extent that citizens comply—go about their regular routine just to do their job, follow orders and mandates, encourage the vaccine passport by participating in it, without acknowledging the plight of its victims, without taking action to right the wrongs—they are complicit in the force initiated by the oppressive government. It’s a conversation the entire country must be a part of. The media refused to cover it, or worse. The protests have changed that; they’ve finally given visibility and a voice to the oppressed.

If ever there were a time to stand up and proclaim that we are all Spartacus, this is it.