I’m a Canadian of Color, a Professor, and I Support the Canadian Freedom Convoy

The true racists are Trudeau and his ilk, including the provincial premiers and university leaders who enforce vaccine passports, lockdowns, and mandates. Indigenous Canadians and minorities are more likely to refuse COVID-19 vaccines. 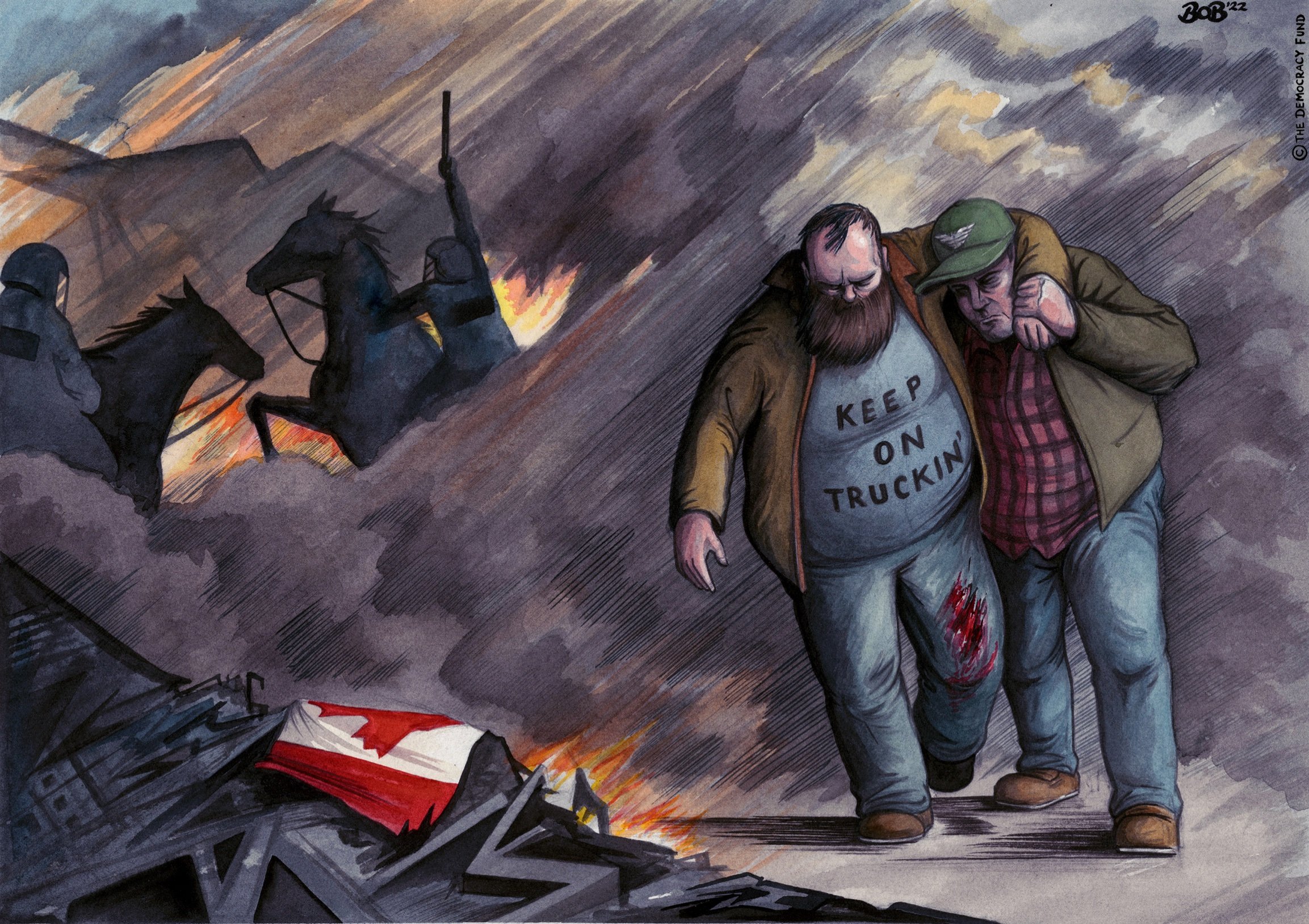 The trucker convoy is a racist movement composed of white high-school dropouts who deface statues and abuse war memorials. This is what Prime Minister Justin Trudeau and Canada’s liberal elite believe, and nearly precisely what he said in an address to the nation.

I am a counter-example to their claim: a first-generation Canadian of minority status and an economics professor, I have nothing but admiration for the truckers and their cause. Indeed many in my community support the truckers, at least twenty percent of whom are South Asian. There is also support from black and indigenous Canadians. This is nothing to do with race. This is everything to do with freedom of choice.

In August of 2021, my university implemented a vaccination mandate — get vaccinated, or lose your job. Requests for medical and religious exemptions were swiftly denied (with the very rare exemption granted to cover the university’s rear-end, legally speaking). On principle, I decided against revealing my private medical data and respectfully told my union and employer, providing them with options for remote work or in-person instruction. As a result of my decision, and despite being tenured with excellent research and teaching evaluations, my university intends to fire me, and my union suggests that I am a danger to the community.

My story is not unique: several capable professors are in my position. However, our colleagues in academia, instead of defending us, retreated into their offices and kept their heads down. My department chair, whom I considered a friend, flatly refused to advocate on my behalf. Only two sessional instructors privately offered me their support. Nothing good happened.

However, when truckers — most of whom are vaccinated — faced a cross-border mandate, they stood with their brothers against government overreach and in favor of freedom of choice. They are asking for the immediate end to all COVID-related mandates and restrictions. Most Canadians agree with them. At this point, such measures are farcical.

In any movement with thousands of people, there will always be a few hooligans. The Black Lives Matter protests, which Justin Trudeau supported, had their fair share of looting and rioting from a minority of supporters. However, this does not in itself discredit BLM’s claims, which must be examined independently of a few violent episodes. The trucker demonstrations, for their part, have been free of violence so far.

Trudeau’s claim that protesters were waving swastikas and dancing on war memorials is irresponsible. The isolated individuals who did this have not been identified, and we do not even know whether they were with the truckers, or merely taking advantage of a large gathering in order to broadcast fringe views. At this stage, it is unwise to speculate, since appeals to race will only divide Canadians.

If we are going to play this game, then the true racists are Trudeau and his ilk, including the provincial premiers and university leaders who enforce vaccine passports, lockdowns, and mandates. Indigenous Canadians and minorities are more likely to refuse COVID-19 vaccines.

Those of us from former colonies, such as myself, find it disturbing that the Canadian government now restricts freedom of movement and access to jobs for vaccine-free citizens — just like the British Raj did to Indians in India. If you are a minority who dares to disagree with the new ‘scientific’ wisdom, then you are cast aside by the very people who claim to stand for social justice. This is not the Canada I grew up in.

The Canada I know is the Canada of the truckers: a country of hard-working men and women from diverse cultures, sacrificing themselves for the betterment of their families and communities. The truckers’ convoy represents a victory of common sense over nonsensical intellectual posturing. The choice to get a vaccine should always be a free one, and there should never be coercion such as the threat of job loss or travel restrictions. Canadians are patient and friendly people, but their long fuse has burned short, and when they get angry, their leaders had better listen.

At this point, three items must be pursued. First, politicians must urgently enter into negotiations with the truckers. The truckers should not leave until all of their demands are met: Prime Minister Trudeau has gone into hiding, suggesting that the truckers have the bargaining edge. Second, public health officials, business leaders, and others who carried out vaccine mandates need to publicly apologize and resign. Finally, we need airtight legislation to ensure that a pandemic is never again exploited for political power and control.

In his book Crisis and Leviathan, economic historian Robert Higgs shows that governments use national crises, whether real or imagined, to expand their control over citizens. The COVID-19 pandemic may go down in history as one of the worst examples of this. SARS-COV-2 undeniably killed people, particularly the elderly and those with pre-existing conditions.

However, the public health response also killed and injured many, with drug overdoses, suicides, and missed surgeries being only the tip of the iceberg. The trucker convoy offers a rare yet narrow opportunity for us to defeat petty tyrants, and to return to common sense.

FEEL FREE TO SHARE
Cornelius Christian
Cornelius Christian is an associate professor of economics at Brock University in St. Catharines, ON. My research interests include Economic History, Political Economy, and Development Economics.