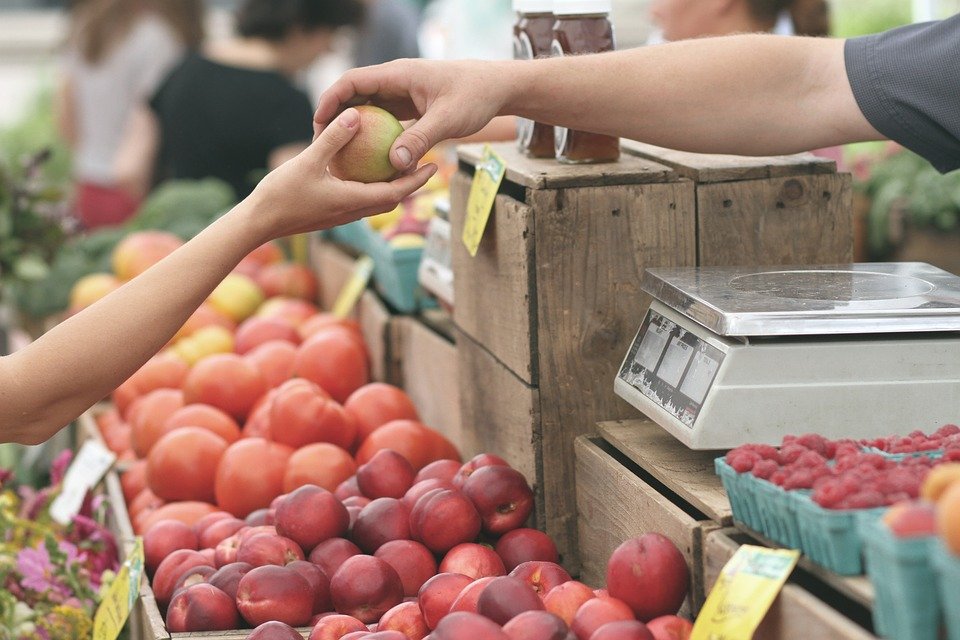 This surprised many politicians and pundits, who’ve become conditioned to much lower inflation numbers. As the graph below shows, yearly consumer price increases since 2010 have mostly fallen short of 2%, the Fed’s target for “optimum” growth. 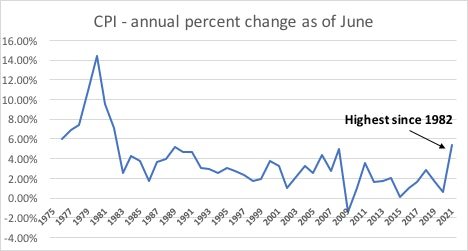 This price hike has sparked a lively debate. The Fed and its supporters insist it is a temporary phenomenon, a short-term surge resulting from the rapid economic recovery.  Fed skeptics think consumer price inflation is here to stay.

However, both sides miss the mark by focusing on consumer prices, which do not accurately measure most peoples’ inflation experience.

The CPI is designed to measure the price changes of things you buy and then immediately consume, such as food, clothing, energy and healthcare. The CPI does not measure the prices changes of long-lived assets, such as houses, savings accounts, and investment portfolios.  While not as urgently important as consumer goods, these are things most people need to live a good and prosperous life.

Unlike consumer goods, long-lived asset prices have soared over the last decade. Here are some examples. From 2010 to 2020, while the cost of consumer goods went up 19%, the price of a 30-year Treasury bond went up 46%; the median price of a home went up 70%; and the price of a high-quality stock portfolio, represented by the Standard and Poor’s 500 index, went up 277%.

As I will illustrate, this increase in asset prices has drastically raised the cost of saving for the future, because at today’s interest rates, accumulating meaningful savings is nearly impossible, and the main cause of asset price inflation is the Fed’s policy of Quantitative Easing (QE).

Since late 2010, QE has been the Fed’s main tool for economic stimulus. Under QE, the Fed buys massive quantities of Treasury and mortgage-backed bonds in the open market.

The specific purpose of QE is to drive asset prices higher, drive interest rates lower, and stimulate spending to reach the Fed’s “optimum” 2% inflation goal. Here’s how Fed Chair Ben Bernanke justified QE to the public back in 2010:

QE was supposed to be a one-time stimulus. But every time the Fed tried to reduce its bond purchases, the stock market crashed, and the Fed promptly announced another round of bond buying. Eventually, QE became a permanent policy.

Today the Fed is buying more bonds than ever – $120 Billion per month, or nearly $1.5 Trillion per year. According to Bianco Research(subscription required) as of June 30, the Fed owns fully 31% of the Treasury market and 35% of the mortgage bond market. The Fed is by far the largest player in the bond market and it has unlimited money, so it can influence prices enormously.

To the seller of the bond, this might be a welcome capital gain. He feels richer and may invest the proceeds of his windfall in stocks or something even riskier. But to the conservative investor seeking to build a future income stream, higher bond prices and lower interest rates are a big obstacle to saving.

In ten-plus years of QE, the Fed has (until now) fallen short of its 2% consumer price inflation goal. However, it’s been wildly successful in suppressing interest rates. How successful? According to the venerable History of Interest Ratesby Sidney Homer and Richard Scylla, interest rates today are at their lowest level in 4000 years of recorded history. (That’s 4000 years, with three zeroes – not a misprint.)

To concretize the hostile effect of today’s tiny interest rates on savers, let’s look at two savings programs. Case One assumes a 5%interest rate on good quality corporate bonds. This rate (and higher) was readily available in the years before QE began. Case Two assumes the rate available today, now that the Fed has sawed the corporate bond rate in half to 2.5%.

Picture a professional person earning $150,000 per year. She wants to save enough each month to provide retirement income of $50,000 per year, 30 years from now. We compare her savings program in the pre-QE era to today’s world of microscopic returns.

The results of the two simulations are summarized in the table below. (I did these calculations on the Compound Interest Calculator, provided by the Securities and Exchange Commission.) 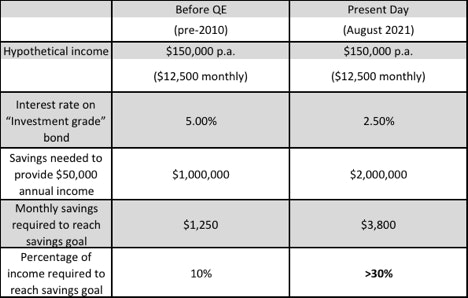 By dominating the bond market and driving interest rates into the ground, the Fed has made it almost impossible to save. This forces savers into more speculative assets like stocks.

Should our saver buy stocks?  Perhaps, but investing in stocks requires expertise because stocks are risky. Risky investing adds additional costs. And, unlike bonds, stocks do not guarantee future spendable income.

It should be obvious by now that the cost of current consumption (the CPI) is not an adequate measure of your real cost of living.

Spending for consumer goods and spending to fund a retirement plan are both costs that must be paid today. The difference is that saving for retirement is a payment today for future consumption.

Apparently, the economists at the Fed assume we are all “consumption machines” who earn and spend only day to day, unconcerned about providing for the future.

While this may describe how some people behave, no rational person wants to live this way.

In fact, most of us are forward-thinking individuals who know we have to save today to provide for tomorrow, next year, and the decades to come. To a rational person, regular saving is part of the real cost of living.

It’s insulting when Fed economists tell us inflation is just fine because consumer prices are rising at “only” 2% per year. To the Fed, all we’re supposed to care about is current consumption. Presumptively, we are irrational brutes with no forward vision.

It’s time to unmask the Fed’s concept of “inflation.” If you expand its meaning to include all your costs of living, including the cost of providing for your future, you will see that inflation is not a new problem.  On the contrary, inflation has been with us for many years, but it has been disguised by the Fed’s preoccupation with consumer prices.