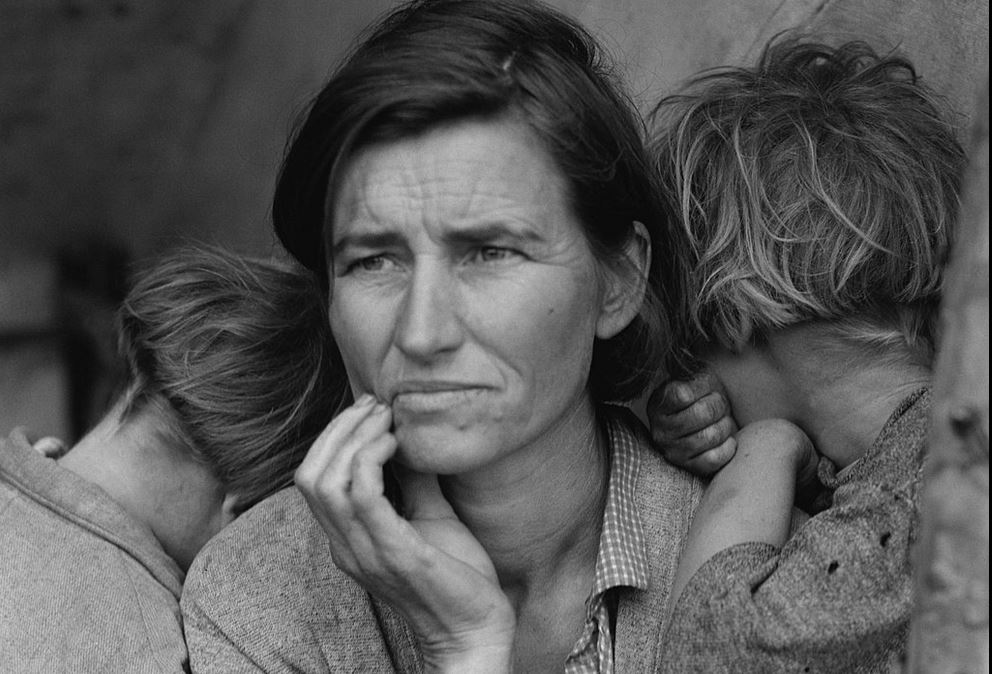 In a recent episode of The New York Times’ podcast, “The Daily,” journalists compared Democrats’ current push for a multi-trillion-dollar spending package to another progressive agenda from the 1960s: Lyndon B. Johnson’s “War on Poverty.”

As a refresher, the legislation passed under LBJ’s agenda included many of the social programs we live with to this day—like Medicare, Medicaid, food stamps, and many other expansions of the welfare system. Collectively, this legislative package was known as the “Great Society.”

After passing the Economic Opportunity Act of 1964, LBJ stated, “For so long as man has lived on this earth, poverty has been his curse. On every continent in every age men have sought escape from poverty’s oppression. Today, for the first time in all the history of the human race, a great nation is able to make, and is willing to make, a commitment to eradicate poverty among its people.”

Many claimed that the Great Society programs would end poverty in the US once and for all.

At the time, these programs were the greatest expansion of the welfare state in our nation’s history, but progressives have sought to further expand it ever since.

Many believe the current spending proposal could do just that. Under the original $3.5 trillion plan, Democrat leaders proposed a cradle-to-grave system that included $300 monthly payments per child, a national free community college program (many states already do this), subsidized child care, paid family-leave, universal preschool, ongoing job-training, elderly-care, and an expansion of Medicare.

However, Democratic leadership, who cannot afford to lose a single vote on the massive bill, have struggled to consolidate their caucus around their plans. Specifically, moderate Senators Kyrsten Sinema (D, AZ) and Joe Mancin (D, WV) have demanded significant cuts. As a result, the bill has been consistently chipped away at. Many programs that were supposed to be permanent are now only “temporary,” while others have been removed entirely.

In their analysis on the podcast, the Times claimed that the Great Society was tremendously beneficial and pointed out that it has become so popular that no modern politicians would seek to overturn it. They lament that much of the original proposed legislation under the budget bill has been cut or given a temporary status and worry that the programs may not be around long enough for voters to become similarly attached. The message? The prior War on Poverty was a smashing success and the two Democrats standing against this potential expansion of it may prevent historic gains like we saw the last time around.

The only problem? Their narrative quickly falls apart under even the slightest scrutiny.

The ‘War’ on Poverty

First and foremost, as Milton Friedman famously quipped, “Nothing is so permanent as a temporary government program.” That isn’t because voters always love the plans the government implements, but rather because our politicians often lack spines and vision for new ways of doing things—not to mention the millions of dollars that industries spend lobbying to keep many programs and laws in place. The programs implemented under the Great Society have had serious problems and damaging ramifications in the resulting decades, and contra the Times’ narrative, there are many who would like to see them done away with. That they still stand is not proof of their success, but rather proof of our system’s failures and bias toward preserving the status quo.

Back to those serious problems and damaging ramifications. As is often the case when the government declares a war on something (think the War on Drugs or the War on Terror), leaders spent an astronomical amount on the War on Poverty without actually making a difference.

According to the Heritage Foundation, “…taxpayers have spent $22 trillion on Johnson’s war. Adjusted for inflation, that’s three times the cost of all military wars since the American Revolution.” And what have we received for it? Increased inequality, families trapped in perpetual poverty, and lower educational attainment. As the below Heritage graph shows, the poverty rate has remained relatively flat for decades even as welfare spending has risen massively. 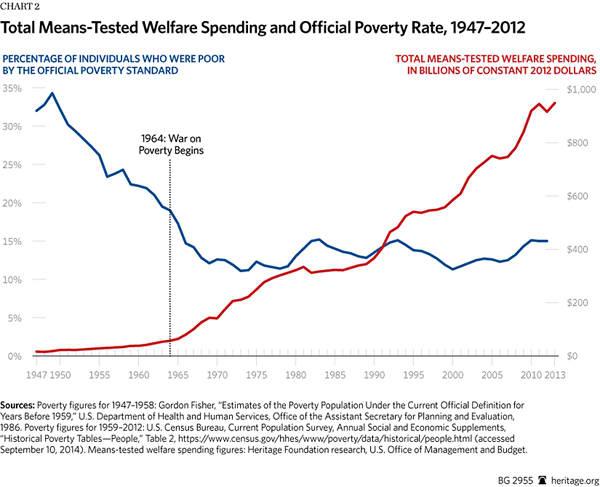 That’s right: we spent $22 trillion for the poverty rate to stay virtually the same.

According to the Wall Street Journal, “During the 20 years before the War on Poverty was funded, the portion of the nation living in poverty had dropped to 14.7% from 32.1%. Since 1966, the first year with a significant increase in antipoverty spending, the poverty rate reported by the Census Bureau has been virtually unchanged.”

So not only did our “War on Poverty” not work, all signs indicate it may have even stopped pre-existing progress.

Today, one in three Americans receive some type of welfare with an average annual cost of $9,000 per person. That sum should be enough to eradicate poverty all together if throwing money at a problem were enough to solve it.

On top of that, we know Medicaid has been a disaster of a program, 38 million people are reportedly hungry in America despite food stamps, our education system is in shambles, and Americans can’t keep up with the rising cost of living—in large part due to the inflation caused by reckless government spending.

The Real Solution to Poverty Is Not Wealth Redistribution, but Wealth Creation

We can assume that the majority of Democrats are well-intentioned in their desire to pass an astronomical expansion of the welfare system. But we can also assume that these are people who should not be in leadership, because true leaders learn from past mistakes. The multi-trillion-dollar spending bill instead doubles down on old, discredited ideas that would gut the middle class and fail to address the true underlying causes of poverty and inequality.

This is why a basic understanding of economics is essential. Until we understand the nature of the problems we face, we will continue to be fooled into supporting ideas that will harm us in the long run. As author and professor Per Bylund once said, “What causes poverty? Nothing. It’s the original state, the default and starting point. The real question is, what causes prosperity?”

The real solution to poverty lies not in wealth redistribution, but in wealth creation. So the question we ought to be asking ourselves is: how can we generate more wealth? Fortunately, history and economic theory provide robust answers: free markets, free trade, free movement, and less government. If we want to end poverty, and I think we can agree we all do, we need to return to the economic system that made this country prosperous in the first place—not double down on a failed approach.

The savings of individuals would steadily replace taxes as the source of provision for old age.