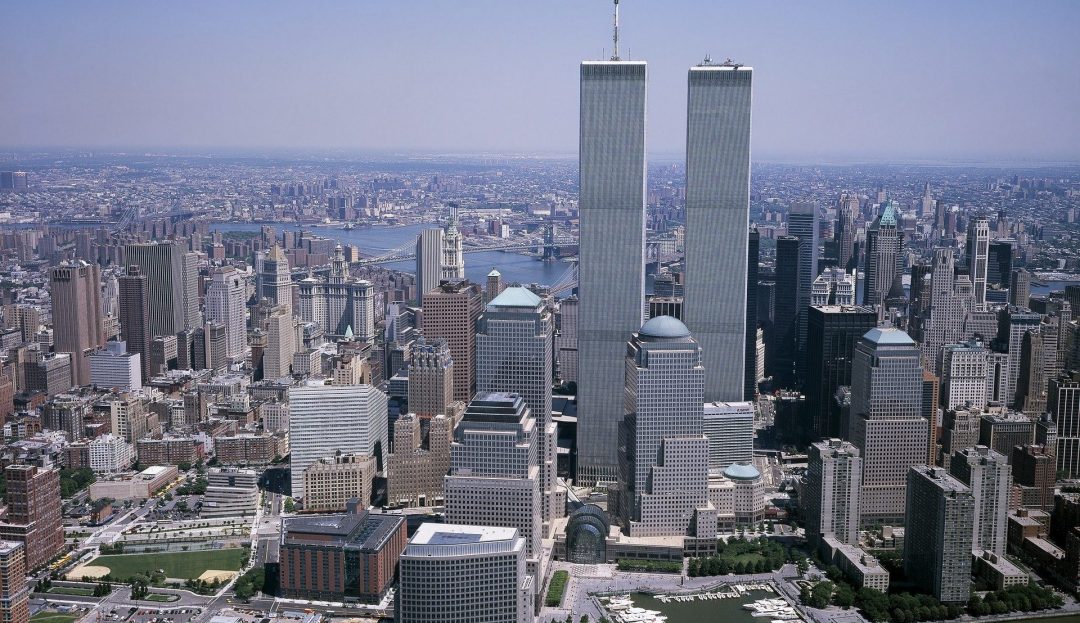 On a bright summer day in 1984, I lay down on the surface of the plaza between the twin towers and took a photo just like this one. I had just arrived in New York the day before, and today I was just about to enter the buildings and take the two elevators to the 92nd floor, where I was to begin my new job. I don’t remember which tower.

At 8:46 am on 9/11/01, it was also a beautiful, crisp, late summer day that I found myself now working 10 blocks away. My office was on the 29th floor, my building was right on the Hudson River, and if I had been looking out of my window a few seconds earlier, I would have seen a horrible sight: a jumbo jet hurtling over the Hudson at an incredible speed, headed to its target just 1/2 mile south of me. 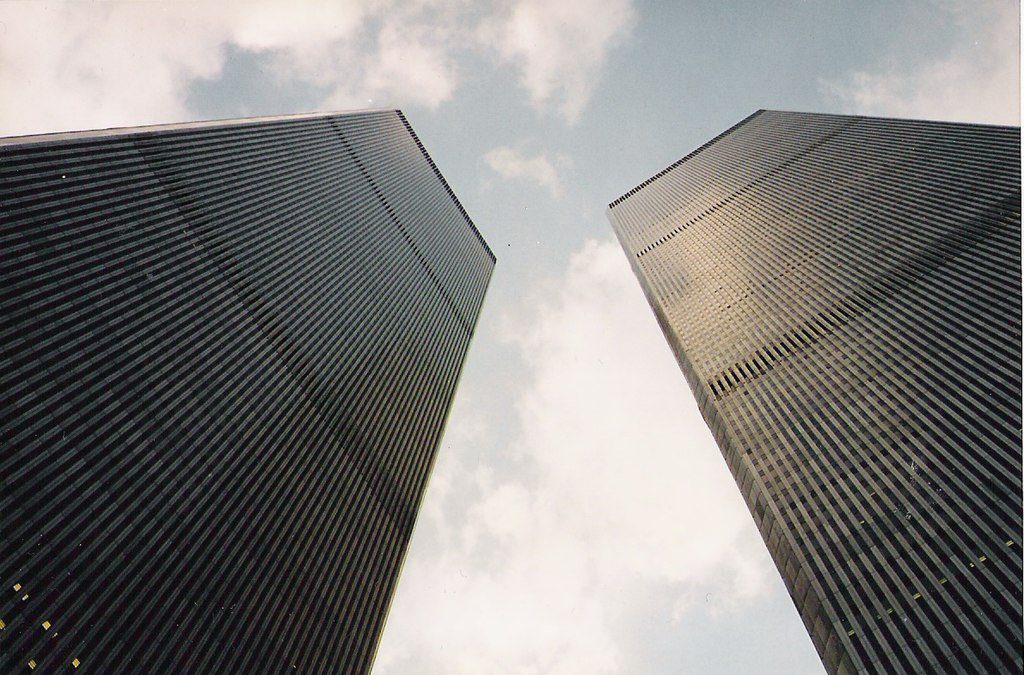 I wasn’t looking out of my window that day, but I was on the phone with a colleague whose window faced south and had a crystal-clear view of World Trade Centers 1 and 2 such a short distance away.

I heard her exclaim that a bomb went off in the Trade Center. When I walked to her side of the floor and saw with my own eyes the diagonal scar on the building, I had to look away. There was too much death, right in front of my eyes.

Then I learned that it wasn’t a bomb. A jet airplane had crashed into the tower.

“How was that possible?” I began to wonder. If a pilot were in his death throes from a heart attack, in his last dying act he would take the plane down in the Hudson or in nearby New York Harbor. He would not let his craft strike a building if that was the last conscious act he was able to do.

I began to wonder, “Could it be something else? Could this be terrorism?”

And then Plane No. 2 struck the second Tower.

I knew the answer. The rest was a blur as I ran back to my desk screaming for everyone to get out. As I descended the stairs, my hands hovered near the rail, expecting that we could feel the jolt any minute of a plane impact. Who knew how many planes were out there? And our building was the headquarters of the world’s largest bank at that time. It was a juicy target for terrorists.

Later, I learned that the Pentagon had been attacked and that a plane headed for either the White House or the Capitol had crashed (brought down by the heroic passengers of Flight 93).

I remember that day so well, too well. It is almost like it was yesterday. The air was so clear, the images so sharp.

America was attacked that day. Even if our subsequent self-defense was not well-executed, we had every right to defend ourselves. Fortunately, and surprisingly to me, there have been many fewer terrorist attacks since then than I had expected. I will credit our efforts and those of others around the world to take out those who did this (such as Osama bin Laden) and the countries that harbored them.

As we see from our experience in Afghanistan and Iraq, that effort was not well-executed, but we had the moral right and obligation to defend ourselves so that this never happens again.