The United States, like Europe, is in the process of unilaterally disarming itself in terms of its energy and economic security. 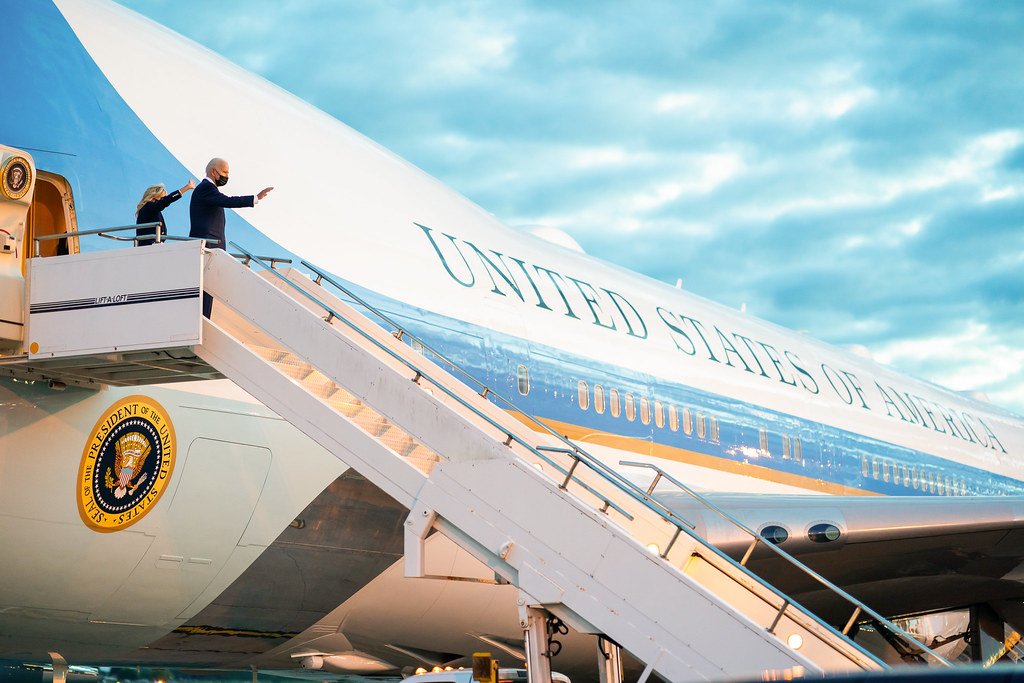 President Biden’s climate policies and the House Democrats’ reconciliation bill will decimate U.S. energy industries along with millions of associated jobs while saddling consumers with skyrocketing prices and electricity blackouts. One only has to look at California and Europe to see that the goals of Biden’s climate policies and the reconciliation bill will eventually end up with the energy disaster Europe and California are experiencing. And, it will cost businesses and taxpayers $3.5 trillion to attempt such foolishness. Clearly, China and India do not intend to participate in the folly as John Kerry has failed miserably to convince them to partake in committing to net zero carbon economies by 2050 on his mission to obtain pledges before the COP26 meeting in November.

The proposed reconciliation bill’s Clean Energy Performance Plan (CEPP) is a punitive program that would require electric utilities to buy or generate additional amounts of renewable energy each year or face steep fines. Companies that reach their quotas would be paid federal indulgences. The program is effectively a national renewable portfolio mandate couched in terms of budgetary fines and subsidies that enable it to be part of the reconciliation bill and pass with a simple majority vote in the Senate. The program would cause reliable fossil fuel plants to be shut down prematurely and electric consumers would bear the brunt of the costs to replace those plants with unreliable and intermittent wind and solar units of which China is the world’s predominant supplier. The result will be high-paying jobs lost, skyrocketing costs and rolling blackouts. It would emulate throughout the United States the power crises that have arisen in California and Europe.

Senator Joe Manchin, a Democrat from West Virginia, lambasted the CEPP, noting that the industry is already moving to “cleaner” fuels. “It makes no sense to me at all for us to take billions of dollars and pay utilities for what they’re going to do as the market transitions.”

In the transition to a net zero carbon electricity sector, U.S. supplies of domestic resources of fossil fuels would be curtailed as well by the proposed bill as producers would be faced with increasing fees, new taxes on their fuels and fewer federal lands available for development. Offshore oil and gas production in the Atlantic, Pacific and Eastern Gulf of Mexico would be prohibited as would production on federal lands in the Arctic National Wildlife Refuge (ANWR) in northern Alaska. Taking away ANWR oil production will hurt the Alaskan economy and put the Trans Alaskan Pipeline System at a problematic level of operation given its reduced oil flows from current allowable drilling operations. The fees, new taxes (such as the natural gas tax on methane), and reduced access to oil and gas resources on federal lands will increase oil and gas prices for consumers. President Biden and other Democrat politicians have made promises to only “tax the rich,” but gasoline prices have already risen a dollar a gallon since Biden has taken office while natural gas prices have doubled.

Europe entered into a transition from fossil fuels to “clean energy” and set stringent goals of greenhouse gas reductions via its commitments to the Paris Climate agreement. Europe’s troubles started after its energy consumption was reduced due to the locked downs caused by the coronavirus. As the European economies opened up from the pandemic, energy prices skyrocketed from rising demand accentuated by a cold winter and insufficient supplies. Coal and nuclear plants had been shuttered, natural gas stockpiles were low and the continent’s increasing reliance on renewable sources of energy exposed its vulnerability when the wind did not cooperate with the plan. Even with mild weather in September, natural gas and electricity prices were breaking records across the continent and in the United Kingdom. Ireland’s grid operator warned in September that there was a risk of blackouts due to lack of wind. Expectations in Italy are that power prices will increase by 40 percent in the third quarter. 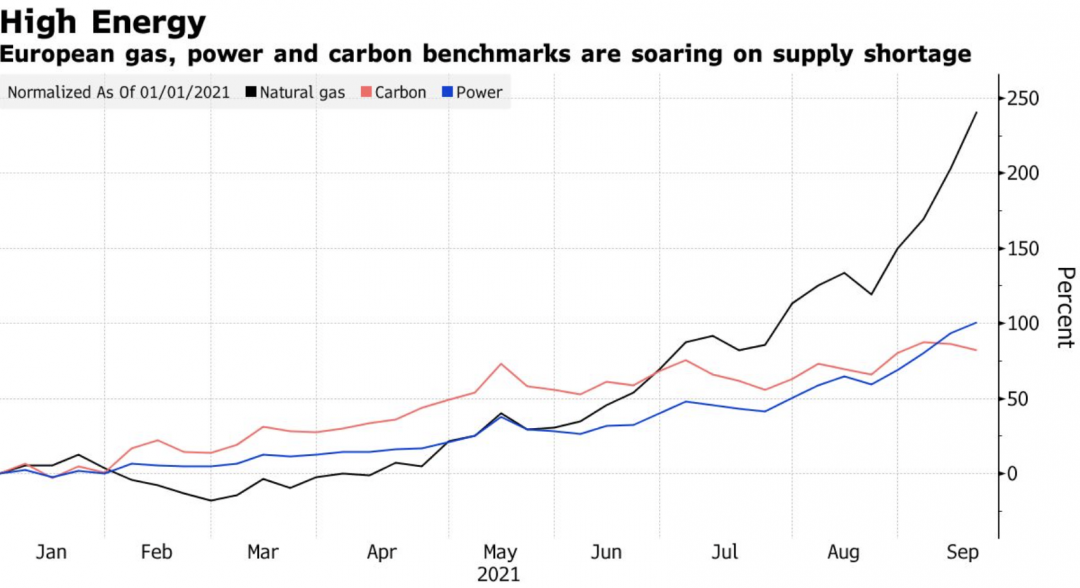 Renewable energy brings volatility, which makes it very costly for the continent to reach its targets. For example, Germany Chancellor Angela Merkel’s energy policies have cost its citizens hundreds of billions of euros in subsidies as the country closed nuclear and coal plants and built wind and solar units in their place. German households already pay electricity prices that are three times higher than American households.

John Kerry, the U.S. Special Climate envoy, tried to get India to pledge to reduce carbon emissions to “net zero” (carbon-neutral) by 2050 at the upcoming COP26 summit in the U.K. in November. But, the Indian government does not consider the “net zero” goal its only priority. India is focused on the “key issues” of climate justice and sustainable lifestyles, stressing the inequality between the demands of developed societies from developing countries on emissions cuts. Kerry indicated that the United States would help India finance its latest target of building 450 gigawatts of renewable energy capacity by 2030. But, India, is also building coal plants that last 40 to 60 years and currently gets over 65 percent of its electricity from coal. With hundreds of millions still in abject poverty, India requires cheap and reliable power for industrialization and economic progress.

China, the world’s largest emitter of global greenhouse gases at 25 percent, is using cheap and reliable coal power to make polysilicon used to manufacture the world’s solar panels. Unlike India, it has set 2060 as its date for carbon neutrality and 2030 as its date for peak emissions. As a result, the world is allowing it to build hundreds of coal plants with over 100 gigawatts planned that will add to its current fleet of about 1000 gigawatts of coal-fired capacity.

China generated 53 percent of the world’s total coal-fired power in 2020, nine percentage points more than five years earlier. China was the only G20 nation to see a significant jump in coal-fired generation, which increased by 1.7 percent (77 terawatt-hours). That increase pushed global coal power to 53 percent from 44 percent in 2015. China’s new coal capacity in 2020 more than offset the retirements in coal capacity in the rest of the world, leading to the first increase in global coal capacity development since 2015. China supports its economy by consuming large amounts of coal, which represents 57 percent of its energy supply. 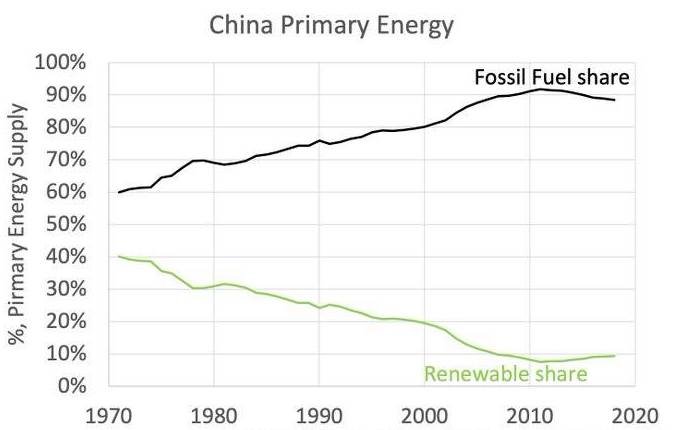 President Biden’s climate policies and the House reconciliation bill will harm America’s energy system as it is doing in Europe while allowing China and India to continue releasing greenhouse gas emissions that will overwhelm whatever declines in emissions that Europe and the United States make. It is a foolhardy way to kill the U.S. economy that needs affordable and reliable energy to build back from the coronavirus lockdowns and to produce good jobs in America. China is clearly ignoring Europe’s and the U.S.’s demands to reduce emissions by its commitment to continue to increase emissions to 2030 and only reach net neutrality in 2060 after the Europeans and Americans have killed their economies by trying to do so by 2050. The United States, like Europe, is in the process of unilaterally disarming itself in terms of its energy and economic security. While the consequences of this course of action are not yet known, the fractures already being seen in our system are not encouraging.