In a 1989 article in The National Interest, Francis Fukuyama declared that the worldwide collapse of socialism signified only one thing: “the unabashed victory of economic and political liberalism.” In a New Yorker article a year later, Robert Heilbroner (hardly a friend of capitalism) acknowledged that Austrian economist Ludwig von Mises “of course . . . was right”—when Mises in 1920 explained why socialism and communism must inevitably fail. Capitalism, it would seem, has won the historic economic and political battle of the twentieth century. 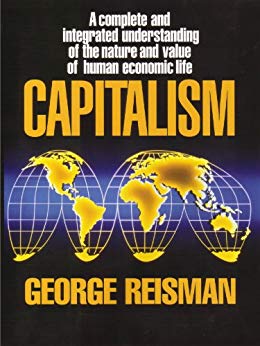 George Reisman, former student of Ludwig von Mises and professor emeritus in economics at Pepperdine University in Los Angeles, has written a manifesto for the twenty-first century to insure that this victory over socialism is not transitory. Capitalism: A Treatise on Economics is an exhaustive defense of laissez-faire capitalism as prerequisite for continued progress of material civilization. Reisman’s arguments are persuasive.

By integrating forgotten but sound principles of such classical economists as Smith, Ricardo, Say, and James and John Stuart Mill with equally sound principles of such Austrian economists as Menger, Böhm-Bawerk, Wieser, and Mises, Reisman develops powerful and highly original theories of aggregate profit and interest, saving and capital accumulation, wages, and aggregate economic accounting. In the course of presenting these theories, he demonstrates the role of technological innovation in reducing prices and increasing the supply of capital goods. He demonstrates that the economic function of businessmen and capitalists is to raise the productivity of labor and thereby the standard of living of the average wage earner. By applying his developed theories in scholarly but compulsively readable detail, Reisman dismantles Marxism, Keynesianism, the “monopoly” and “oligopoly” doctrines, environmentalism, and all fundamental forms of socialism and interventionism. This book is at once an introductory, intermediate, and advanced text on economic theory, as well as a mine of information on current political and economic issues.

The work is divided into three major parts. Reisman begins Part One, “The Foundations of Economics,” by defining the field as the “production of wealth under a division of labor,” immediately disputing the “scarcity” definitions found in contemporary economics textbooks. He goes on to discuss the nature of wealth as “material goods made by man,” the connection of wealth to human reason, and the attacks on the accumulation of wealth by the environmental movement. The second and third parts of his book roughly correspond to “micro-” and “macroeconomics,” respectively, although he, along with all Austrian economists, disputes the legitimacy of such a division.

In Part Two, “The Division of Labor and Capitalism,” Reisman states and defends over the course of several chapters one of his fundamental propositions: that human life and well-being depend on the production of wealth, which in turn depends on the rising productivity of labor, which in turn depends on an expanding division of labor, which, finally, depends on the institutions of laissez-faire capitalism. Chapters 6–8 of Part Two incorporate a revised and expanded version of Reisman’s 1978 book The Government Against the Economy, which earned him an endorsement from Nobel laureate (and Austrian economist) F. A. Hayek.

The culminating chapter of this Part is Reisman’s thoroughgoing discussion of all forms of monopoly. He rejects the popular economic concept on which the American antitrust laws are based, namely that monopoly is a single seller in a given territory. He concludes that the only valid meaning of the term is government-granted privilege. In this chapter, he argues that the antitrust laws are in fact pro-monopoly and that the socialist state is the one giant monopoly critics have long charged capitalism of tending toward. He demonstrates how Böhm-Bawerk and Ricardo use cost of production as a determinant of prices, rather than as a support of Marxism; Reisman then uses the ideas of both economists to critique the marginal revenue doctrine of contemporary economics. Reisman concludes the chapter by demolishing the perennial bugbear of business theory: the doctrine of pure and perfect competition.

The final chapter of Part Two discusses the productive roles of such maligned business activities as moneymaking, stock and commodity speculation, so-called insider trading, retailing, wholesaling, and advertising. It concludes with a refutation of the Marxian exploitation theory by using classical economics, specifically by throwing out the primacy-of-wages doctrine and replacing it with the notion that the original and primary form of income is profits. In other words, what Robinson Crusoe earns on his desert island is all profit; when he hires Friday, Crusoe must then deduct Friday’s wages from his—Crusoe’s—profits. From this follows a radical reinterpretation of “labor’s right to the whole produce.”

In Part Three, “The Process of Economic Progress,” Reisman explains in considerable detail the mechanism by which a free economy advances or, if interfered with by the government, does not advance; his theme is that progress requires saving (investment), capital accumulation, and technological advancement.

He begins by defending both the quantity theory of money and Say’s Law, which he says should more properly be called James Mill’s Law. He argues that monetary demand is entirely a function of the quantity of money existing in the economic system, whereas real demand is determined by capital accumulation and increased production. Consistent with the Austrian business cycle theory, he points out how government manipulation of the money supply, among other government policies, causes inflation, recession, and mass unemployment; in the absence of such manipulations and especially with the adoption of a 100%-reserve gold standard, full employment and an economy free of volatile swings would be the norm.

Real wages, Reisman demonstrates, are increased by raising the productivity of labor, while the productivity of labor is increased by capital accumulation, and this last is caused by saving and technological progress. Any attempt to increase wages through inflation or minimum wage laws is doomed to failure because such policies only increase money wages, not the worker’s standard of living. Under capitalism real wages rise relative to and because of the declining prices that accompany capital accumulation; in this process money wages may actually fall. Technological progress is an important determinant of capital accumulation because it is necessary to offset diminishing returns. This discussion is part of many that aim to refute the claims of Keynesian macroeconomics.

One of the legacies of classical economics, which encouraged Marx to develop his exploitation theory, was the notion that capital accumulation and falling prices must inevitably lead to a falling rate of profit, eventually falling to zero. Reisman’s most original contribution to economics is his theory that net consumption plus net investment equals aggregate profit. The primary source of aggregate profit, states Reisman, is the personal consumption expenditures of the owners and creditors of businesses. This net consumption, which is the consumption expenditures of everyone in the economic system minus wages paid to workers, will always exist as long as the owners and creditors of businesses seek to spend money in personal, non-business ways. The rate of net consumption constitutes the real rate of profit.

Net investment, which is productive expenditures minus costs, does tend toward zero, because productive expenditures and costs in the long run and in the absence of an increasing money supply tend to equal one another. Where the money supply increases over time, however, and it would increase even in a precious metals economy, net investment tends to equal the rate at which the money supply increases; thus, the rate of net investment constitutes the nominal rate of profit. Through a series of nearly a dozen ingenious graphical figures, contrasting stationary and progressing economies, Reisman demonstrates this theory and its role in the accumulation of capital, as well as the effects of taxation, budget deficits, and other government hindrances on the process of progress.

Reisman also presents his own approach to national income accounting, arguing that gross national product (or gross domestic product) essentially measures the rate of increase in the money supply and considerably understates national income; he suggests and demonstrates gross national revenue as a better measure. In a chapter-length critique, Reisman concludes that Keynsianism is merely “a piece of flotsam and jetsam from the wreckage of critical thought that [has been] carried along by the tide of irrationalism and anticapitalism.” Finally, Reisman’s last chapter is a detailed, practical political and educational program of deregulatory and privatization steps by which to establish a laissez-faire society.

This book advances economic theory by several leagues and will not be surpassed for many decades; socialist sympathizers and interventionists of all types, if they are to maintain any scholarly or political respectability, must address Reisman’s arguments. Informed by the philosophy of Ayn Rand, as well as the economics of Ludwig von Mises, this book is not a conservative manifesto; rather, it is a liberal program in the spirit of the Enlightenment and, in many respects, in the spirit of nineteenth century progressive liberalism. It is a defense of secular, scientific, and technological values that emphasize reason and self-realization of the individual human mind as the essence of political freedom. When it comes to the alleged anarchic and feudal nature of capitalism, however, Reisman demonstrates that those epithets are in fact precise descriptions of socialism.

Indeed, the progressive or modern-day social liberals would do well to heed Reisman’s section on the “indivisibility of political and economic freedom.” They just might come to understand how his theory represents the true nature of liberalism, a market liberalism for the twenty-first century.

Postscript. See my article on “Profits over People or Primacy of Profits?” which includes a brief outline of Professor Reisman’s theory of profit. A more detailed, though still brief, summary of his “Net Consumption, Net Investment Theory of Aggregate Profit” can be read in my 2004 article published in the American Journal of Economics and Sociology.

Order Capitalism: A Treatise on Economics.

Jerry Kirkpatrick
Jerry Kirkpatrick is professor emeritus of international business and marketing at California State Polytechnic University, Pomona (Cal Poly Pomona), and is author of In Defense of Advertising, Montessori, Dewey, and Capitalism, and Independent Judgment and Introspection. Visit his blog at jerrykirkpatrick.blogspot.com.