A Declaration and Constitution for a Free Society

Making the Declaration of Independence and U.S. Constitution Fully Consistent with the Protection of Individual Rights. 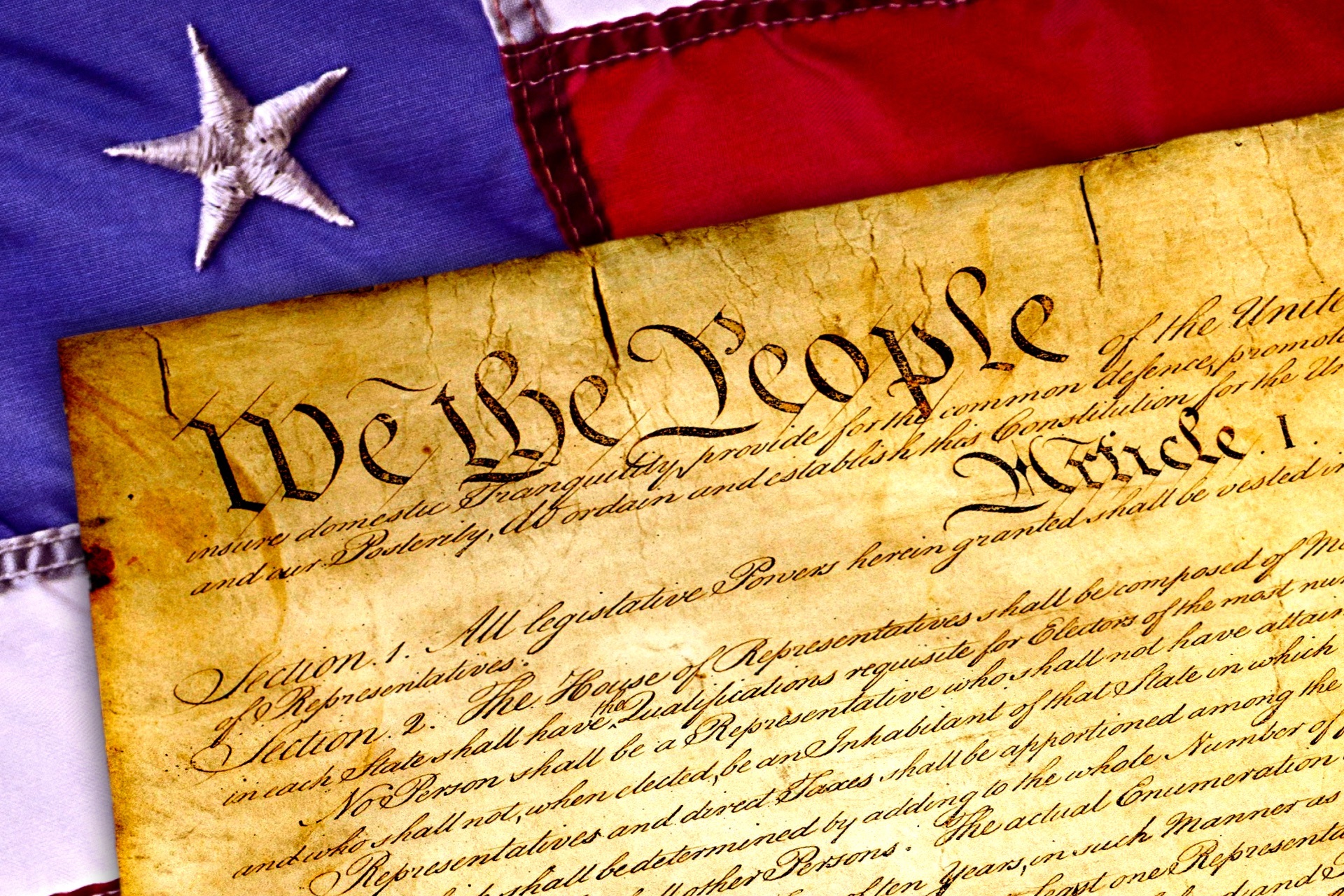 I have recently completed a book titled A Declaration and Constitution for a Free Society (Lanham, MD: Lexington Books, 2021). The book modifies the Declaration of Independence and the U.S. Constitution to make them fully consistent with the protection of individual rights and freedom.  Some of the questions the book answers include the following: What are individual rights?  What is freedom?  How are they related to each other?  Why are they so crucial to human life?  How do you protect them?

The book uses Objectivist philosophy—the philosophy of Ayn Rand—to analyze subjective, intrinsic, and objective theories of rights and show why rights and freedom are objective necessities of human life.  This knowledge is then used to make changes to the Declaration and Constitution.  Through these changes, the book shows the fundamental legal requirements of a free society and why we should create such a society.  It demonstrates why a free society is morally, politically, and economically beneficial to human life.

The book addresses a wide variety of issues that are directly or indirectly related to the constitution of a free society, including topics as diverse as sex, international trade, and immigration, the Exceptions and Regulations Clause, the legalization of drugs, the racist and sexist nature of affirmative action laws, whether term limits are consistent with a free society, same-sex marriage, what is an appropriate government response to a pandemic, social security, child labor, the Takings Clause, the right to bear arms, the regulation of production and trade, the economic implications of protecting rights (or not protecting them), the validity of the senses, balanced-budget amendments, whether the right to counsel is consistent with a free society, anarchy and “competing governments,” and many, many more issues.

Here are a few excerpts from A Declaration and Constitution for a Free Society. Excerpts are reproduced with the permission of Lexington Books.

One clause that I repeal from the Constitution is the Commerce Clause.  This clause allows, among other things, Congress to regulate commerce among the several states.  Here is some of the discussion on this topic from chapter 4 of the book:

While the original intent of the Commerce Clause was to prevent the states from erecting barriers to trade, that is not how the clause has been interpreted and it is not what “to regulate” refers to today.  Moreover, one of the earliest and most influential Supreme Court Chief Justices, John Marshall, stated in Gibbons v. Ogden (1824) that the power of Congress to regulate interstate commerce “is complete in itself, may be exercised to its utmost extent, and acknowledges no limitations other than are prescribed in the Constitution.”  He went on to say in the ruling that “The wisdom and the discretion of Congress . . . and the influence that their constituents possess at elections are . . . the sole restraints on which they have relied, to secure them from its abuse.”  In essence, he stated that Congress can regulate interstate commerce however it sees fit, subject only to the will of the voters and the limits of the Constitution.  This provides very little limitation on the power of Congress to regulate interstate commerce, as history demonstrates.  In fact, if the voters want more regulations, it provides a positive political force to expand the regulatory power of Congress.  This has been the general trend throughout much of the history of the United States, especially since the latter nineteenth century.  Since that time, the power of Congress to regulate in general (not just interstate commerce) has been expanded based on the Commerce Clause.

To have a proper understanding of why this clause must be eliminated, one must understand what it means for the government to regulate.  Regulation in this context refers to the government interfering in the market by initiating physical force to change some outcome that government officials do not like.  Regulation is not the same as protecting individual rights.  When the government protects rights, it bans the initiation of physical force, such as when it protects people from fraud.  When the government regulates, it violates individual rights because it initiates physical force.  The government regulates for many reasons, including to forcibly change the wages workers can earn in the market (through minimum wage laws), to impose laws based on environmental ideology (through the Environmental Protection Agency), and to impose drug safety and efficacy rules on drug manufacturers (through the Food and Drug Administration).

In chapter 4 and throughout the book, I discuss how regulation reduces the productive capability and standard of living.  I also discuss how eliminating regulation and other forms of government interference will lead to greater peace, prosperity, and good will among human beings.

Another amendment I repeal is Amendment XXII on presidential term limits, discussed in chapter 7.  Here is an excerpt from that discussion.

Term limits are not consistent with the protection of individual rights.  They are arbitrary restrictions placed on popular politicians.  They are also not consistent with laws that treat people equally.  They are essentially equivalent to bills of attainder.  Laws should not single people out and punish them because they are popular.  To have a system of laws in which people are equal before the law, people should be able to run for political offices regardless of how many times they have been re-elected.

It might be claimed that rights can be protected in a better fashion by imposing term limits because politicians could gain too much power by remaining in office too long and exercise this power in a manner that violates rights.  However, whether a politician violates or protects rights depends on the type of ideas he embraces, not how many times he is re-elected.  If a politician violates rights after holding office for a long period of time, the voters can vote him out of office (if they have retained any respect for protecting rights).

In fact, politicians who violate rights are voted into office by voters who want political leaders who violate rights.  It is the fundamental ideas generally accepted in the culture—and thus generally accepted by voters and politicians—that lead both voters and politicians to want to violate (or respect) rights.  Term limits cannot change this.  A change in the fundamental ideology that is prevalent in the culture is necessary to make such a change.  I discuss the fundamental ideas that underlie (or undermine) the protection of rights in chapter 1 of the book.  If term limits are imposed in a society where rights are generally violated, one will merely end up with a series of politicians who want to violate rights being voted into office.  You will not somehow magically end up with politicians in office who want to protect rights just because a new person must be elected periodically.

Additions To The First Amendment

Individuals and private organizations, including corporations, have a right to not associate with others if they do not want to—even for irrational reasons, such as racism.  For example, Ku Klux Klan members have the right to not allow black people to join their group.  I must emphasize here that I am a staunch opponent of racism because it is irrational—it is an abandonment of the mind.  I discuss in detail in chapter 8 of the book why it is irrational.  Nonetheless, being a racist is within the scope of people’s rights, so long as they do not initiate physical force against others.  Importantly, in chapter 8 I also discuss the practical benefits of protecting the right to not associate with others, including the right to engage in irrational discrimination.

Unfortunately, the right to not associate with others is often violated today.  For example, antidiscrimination laws that exist today violate the right to not associate with others.  One may not like individuals and private organizations discriminating for irrational reasons, but to protect rights consistently one must protect the right of people to engage in irrational activities (so long as the irrational activities do not initiate physical force against others).

The Supreme Court case of Roberts v. United States Jaycees (1984) provides one reason why this right needs to be explicitly protected.  In that case, the Court decided that compelling the U.S. Jaycees to accept women as full members did not violate the Jaycees right to association.  One might not agree with a group such as the Jaycees refusing full membership to women—I certainly do not agree with it—however, they have the right to refuse membership to anyone for any reason.  No one has the right to, in essence, reach for a gun (i.e., use government coercion) to force groups to accept people for membership that the groups do not want to accept.

The above is just a tiny fraction of the topics covered in the book.

SPECIAL OFFER: The book is published by Lexington Books in its Capitalist Thought book series. For a limited time, the book can be purchased at a 30-percent discount at the publisher’s website with the following code: LEX30AUTH21.