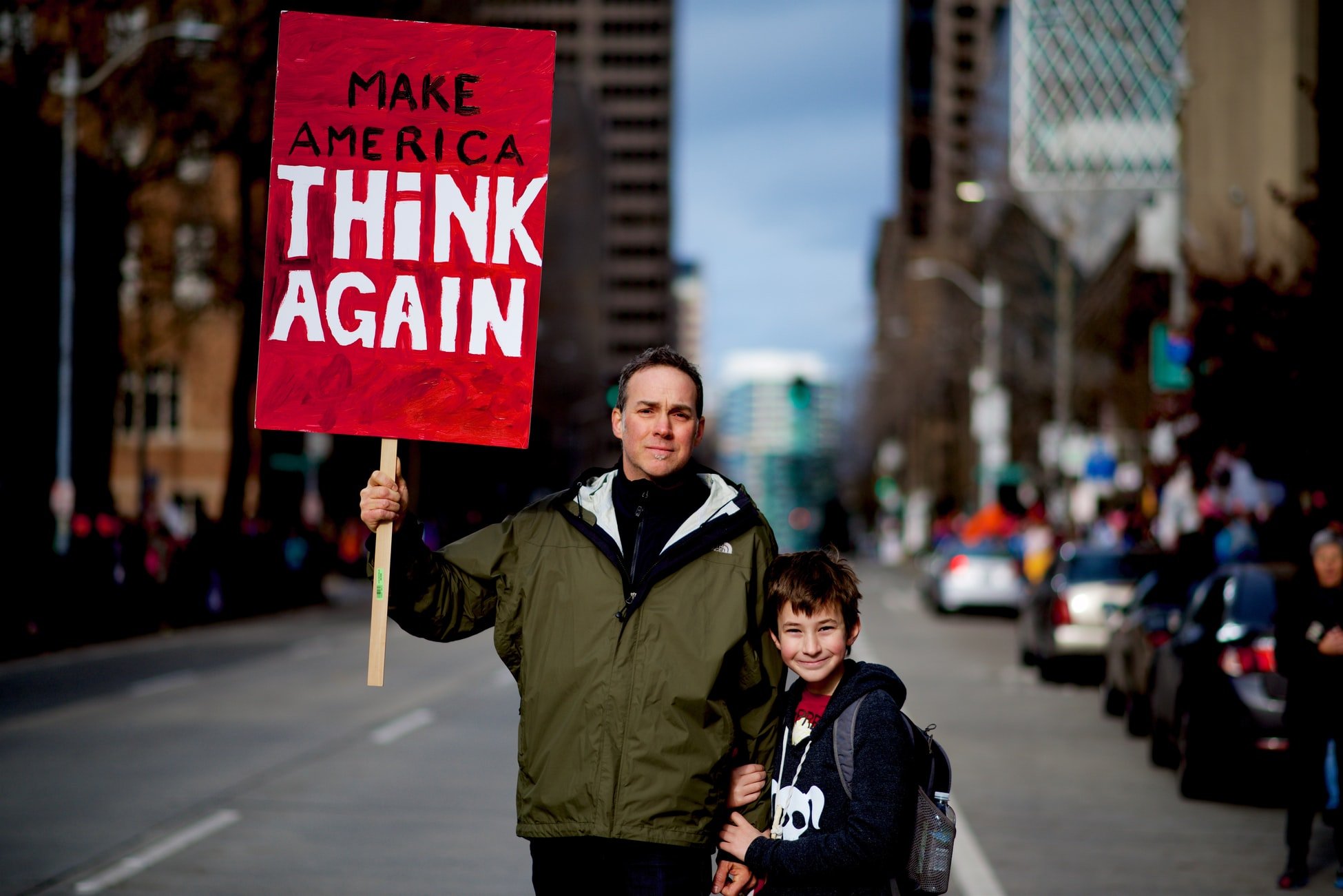 In the aftermath of the Trump-inspired right-wing assault on the U.S. Capitol last week, each “side” rightly accuses the other of hypocrisy, of not “practicing what they preach,” of not “walking the talk.” You know the tiresome routine.  Last summer left-wingers tried to justify (as “peaceful protest”) their own violence at Portland, Seattle, Minneapolis, and elsewhere, but now denounce right-wing violence at the Capitol; last summer right-wingers denounced the leftist violence, but now try to excuse their own.

Why is hypocrisy, a vice, now so ubiquitous?  Its opposite is the virtue of integrity, which is rare these days because for decades universities have inculcated philosophical pragmatism, a doctrine which does not counsel “practicality” but instead undermines it by insisting that fixed and valid principles are impossible (hence dispensable), that opinion is manipulable. For the pragmatists, “perception is reality” and “reality is negotiable.”  In place of reality, they prefer “virtual reality,” instead of justice, “social justice.” They embody all that is fake and phony. All that remains as a guide to action is rank opportunism, expediency, “rules for radicals,” whatever “works” – to win an argument, advance a cause, or enact a law – for now at least (until . . . it fails to work).

In my essay last summer on the many types of anti-capitalism[1] I discussed a crucial consequence of pragmatism: a near-universal rejection of even a pretense to objectivity and indulgence in subjectivity (at both the individual and group level):

Subjectivism is the notion that humans qua subjects can hope, wish, or pray for things to be true and it will be so. It is a denial of our need to be objective, to focus on reality as it is, to consult the evidence of our five senses (our only access to reality), to use the laws of logic and avoid fallacies, to establish truths and avoid myths. Social subjectivism, a close cousin to populism, holds that majority (or “consensus”) opinion must be true, or the best gauge of it. If most people (or a majority in a sub-group) says the Earth is flat, or slavery is moral, or environmentalism is humane, then it is so. Dissenters are “deniers,” to be muzzled. Yet subjectivism also permits no fixed truths, no permanent principles, and its companion errors – epistemological skepticism (“nothing can be certain”) and moral relativism (right and wrong are “contingent”) – only further erode capitalism’s foundations. Until the intellectuals comprehend, defend, and apply objectivity, capitalism will remain undefended and face extinction. Despite capitalism’s great success over a relatively brief history, it has suffered many foes while enjoying few friends. This may seem paradoxical until you realize that capitalism is much more than an economic system. It is a social system unique not only in its economics but in its philosophy, psychology, politics, and culture. Foundationally, it counts on reason, objectivity, egoism, individualism, and constitutionalism. The more these values are defended in the future, the greater capitalism’s future can be. It only requires humans to be truly human – i.e., rational.

For every wrong there’s a remedy, unless you misdiagnose wrongs or care merely to describe them (only when committed by the “other side”) not fix them. To move beyond the surface details and petty partisanship of recent events – to go deeper and find root causes (hence remedies) – consider philosophy, especially its most fundamental branch, epistemology, the science of how we know and avoid fallacies.[2]

Reason is the uniquely human faculty that integrates the evidence of the senses and applies the rules of logic to validate reality-based knowledge (including basic and complex concepts, propositions, principles, and theories). Rationality is the process – the act – the virtue – of exercising the faculty of reason. It is not an automatic process; it is not innate; it must be taught and learned. The many opposites of reason include faith, revelation, intuition, fantasy, fabulism, and surmise. Today these are ubiquitous.

What explains today’s bi-partisan violence? The absence of reason (and objectivity). There is (literally) no reason for it, but there’s an explanation: when reason is out, persuasion and peaceful assembly-protest also are out. What remains is emotionalism – and violence.

Without reason there is no self-government, only political paternalism, with leaders acting as parents and citizens acting as children — and rulers who command strict obedience to mere arbitrary “say so.” Temper tantrums and groundings. Today we are witnessing a broad, shared suspicion of reason as well as near universal, bi-partisan agreement on an authoritarian role for the state. The two are intimately related. Many American voters are now substantially prepped for statism; they demand it and vote for it, in every form, in every realm, whether by means of nationalism (on the right) or socialism (on the left) – jointly, national socialism (aka, Nazism). It is no coincidence that for at least a dozen years now Americans have had, as their preferred presidents, inexperienced, narcissistic, authoritarians. On this reading, looked at in this broader context, Mr. Obama, Mr. Trump and their devotees are far more alike than different.

Are we really so “polarized” or divided today, as most commentators claim? No. Half of all voters want a huge and growing welfare state that stymies right-wing speech and assembly (see Democrats), while the other half wants merely a less-huge, slower-growing welfare state that stymies left-wing speech and assembly (see Republicans). Both want the welfare state – which is nothing but constant pressure-group warfare. One side opposes capitalism while the other opposes socialism, but neither side wants (or extolls) what we need, if we’re to be humanistic and objective: capitalism.[3]

Just as no side today is truly pro-capitalist, no side is truly pro-reason, on principle and without exception, in every field.[4] Pragmatism and other variations on un-reason actively prevent it. Very few societal elements today are pro-capitalist precisely because so few of them are pro-reason. Certainly religious-medievalist, faith-based right-wing conservatives are not consistently pro-reason – nor are post-modernist, deconstructionist, relativist-skeptic, left-wing statists[5] – nor are the middle-road “moderates” who glimpse the twin errors but merely try to synthesis them. Many of the loudest mouths today practice not rationality (a virtue) but rationalization (a vice); as quintessential hypocrites, they pretend to give reasons while rejecting reason.

No one today should be surprised to see bi-partisan violence in America. It is not paradoxical but wholly logical, in the sense that bad ideas (and causes) necessarily breed bad effects. Causality and reality still rule, for good or ill. But logic entails basic rules of reasoning, so when reason is out, so also is logic. There is no self-corrective.

Remember, “for every wrong, a remedy.” Let us focus not just on negatives but also on positives, on cures. A major wrong today is bi-partisan violence. Politically, the only cure is a strict application of rule of law; philosophically, the only remedy is reason.

[1] Richard M. Salsman, “Ten Varieties of Anti-Capitalism,” Capitalism Magazine, June 29, 2020.
[2] For more, see Ayn Rand (Introduction to Objectivist Epistemology, 1979;1990); Leonard Peikoff (“Objectivity,” chapter 4 and “Reason,” chapter 5 in Objectivism: The Philosophy of Ayn Rand, 1991); David Kelley (The Evidence of the Senses: A Realist Theory of Perception, 1986, and The Art of Reasoning: An Introduction to Logic and Critical Thinking, 5th Edition, 2014); and Harry Binswanger, How We Know: Epistemology on an Objectivist Foundation (2015).
[3] Richard M. Salsman, Where Have All the Capitalist Gone? (American Institute for Economic Research) – forthcoming in 2021.
[4] Richard M. Salsman, “Yes, Follow the Science – in Every Field,” American Institute for Economic Research, December 20, 2020.
[5] Stephen R. C. Hicks, Explaining Postmodernism: Skepticism and Socialism from Rousseau to Foucault (2011).