Regarding the first part of Cruz’s question about who “elected” Mr. Dorsey to his role at Twitter, the answer should be obvious: the shareholders of Twitter did. As CEO of Twitter, Mr. Dorsey determines the corporation’s policies. If the shareholders do not like his decisions, they can vote to have him removed.

Regarding the second part of Cruz’s question, Mr. Dorsey’s only power is over a website called Twitter. Dorsey has “no power to determine what the media are allowed to report and what the American people are allowed to hear” — except over Twitter.

Why the loaded question then by Senator Cruz?

Cruz is setting up Dorsey and other big-tech execs, like Facebook CEO Mark Zuckerberg and Google CEO Sundar Pichai, as villains who control the “gates of information,” to set up himself and his government colleagues as the heroes who will knock those gates down – by having the government take control over those gates.

Twitter-like Google, Amazon, Facebook, CNN, NYTimes, Washington Post, etc.- is biased with a political agenda. Yet, as a private organization of individuals in a free society, Twitter has the inalienable right to be politically biased.

The principle is that individuals do not gain or lose rights when they join a group, as their rights are inalienable. Just like an individual human being, a church group, a newspaper, or a T.V. show, Twitter should be free to ban and block what it wishes on its property.

Twitter blocking views that it finds objectionable is no different from me blocking a friend from putting a Trump sign on my lawn but allowing another friend to put up a Biden sign. It’s not censorship, but a legitimate action protected by property rights. My property, my choice. Twitter’s property, twitter’s choice.

Similarly, Twitter’s shutting down accounts of newspapers that publish information that casts Democrat Joe Biden in a bad light (such as the NYPost article claiming that Biden’s son has benefited from political cronyism and corruption) violates the rights of no one.

Twitter’s suppression of political tweets may be wrong according to the Internet “let information be free” principles that many internet pioneers claim to believe in. Still, such “suppression” violates the rights of no one. It only shows Jack Dorsey to be a hypocrite that only believes information should be free to flow when it supports his pet political causes, such as the racist “anti-racism” anti-capitalist rants of Ibram Kendi. Much like the anti-capitalist communists in China, Cuba, and elsewhere, they cry for “free-speech” when they seek political power, and once in power, they stamp it out. In this case, what is disturbing is that Ted Cruz, a senator of Cuban descent, is now joining them!

Though Twitter giving less publicity to my views does make it difficult for me to pursue my happiness, it does not violate my right to pursue my happiness. My rights are left untouched. Similarly, Google has now “suppressed” my site capitalism.org – a former USA Today Site of Day. For the past two decades, capitalism.org was in the top 5 on Google for the keyword ‘capitalism.’ Now, thanks to recent “algorithm changes,” Google has pushed the sites ranking to below 50. I’m displeased with such actions, but my rights are untouched.

Neither is Twitter’s policy fraud, as their policy is stated in their terms of service that one is required to read to sign up for their free service. Such actions would be fraud (a violation of rights) if Twitter advertised that it was an open platform that gave equal weight to all points of view and was a non-discriminatory environment that does not favor one political party over another. But Twitter’s Terms of Use policy makes no such claims. They are not a “free-speech zone.”

In a free country, if you don’t like Twitter’s policies, you are free to choose another service or get together with a group of other individuals and create your own Twitter alternative (as the fast-growing Twitter competitor Parler has done).  [2]

Censorship is when the Government Determines the Content of Speech

What the government in a free country may not do is physically force Twitter to change policies that violate no one’s rights. In a free, capitalist country, the government should not “hand-cuff” and limit a private company’s ability to do as it pleases with its property, so long as it is not initiating physical force or committing fraud against others.[3]

Real censorship would be for the government to determine what goes on private property, e.g., forcing me to put up a Biden sign on my lawn, e.g., forcing Twitter to put up specific posts revealing Biden family wrong-doing on its site.

Real censorship is when the state uses its legal power to use force to determine the content of speech we should engage in (either by banning non-rights violating speech or forcing one to say things one would not do so voluntarily).

If the state can arbitrarily determine what Twitter must post, it goes from being the protector of freedom of speech to its censor.

“‘Censorship’ is a term pertaining only to governmental action. No private action is censorship. No private individual or agency can silence a man or suppress a publication; only the government can do so. The freedom of speech of private individuals includes the right not to agree, not to listen and not to finance one’s own antagonists.”[4]

Inherent in the right to freedom of speech is the right not to speak.

Inherent in the right to freedom of speech is the freedom not to use one’s property to promote or publicize ideas one disagrees with.

If the state determines what I must say and publicize, I no longer have the freedom to speak freely. My speech is no longer rightfully regulated by my conscience but by the state.

What of the claim that Twitter favoring press in support of the Left has an “influence over elections”?

“Influence” is a weasel word. Everything influences elections: from a thunderstorm that prevents people from going to the ballot boxes; to lethargy over the choice of lousy candidates to a newspaper editorial; to a morning opinion show; to people getting together to discuss, or not to discuss, politics. The list of election “influences” is endless. Do those “influences” violate the rights of anyone? No, they “neither pick my pocket nor break my leg.”[5] All such actions are protected under the principle of individual rights.

Neither does Twitter’s “suppression” of tweets block anyone from seeking alternative sources of information. The information is allowed to “flow” as it did on the Wall Street Journal and countless other outlets, blogs, and newspapers.

The only agency with the power to block information flow on a nation-wide scale is the government, as the government has a legal monopoly on physical force. [6]

Censorship is what we observe in communist dictatorships like China, and its crackdown in Hong Kong, and its persecution of the doctor who “blew the whistle” on the coronavirus. Quoting Professor Richard Ebeling in “NBA Kneeling To China Demonstrates That Freedom of Speech is Imposible Without a Free Market“:

“The difference between Donald Trump and Xi Jinping is that Donald cannot command companies doing business with the NFL to stop doing so until every football player who has kneeled during the national anthem publicly apologize for ‘offending the American people.’ China can.”

The Statist Notion of Censorship Must Be Rejected

To call Twitter’s actions, “censorship” is a massive inversion of the truth. This falsehood is based on the collectivist-altruist principle that the individual does not live by inalienable right, but only by government permission. That is, the individuals who own Twitter are only tolerated when they pursue the happiness of others.

Twitter creates a service of tremendous value to “the public,” and because it is valuable to so many people, Twitter loses any right to control its creation. That control is taken over either de jure through socialist “nationalization” or de facto through fascist “regulation” and controls. The bigger and more successful a Big-Tech company becomes (i.e., the more value it provides to others), the greater its chains.

This collectivist notion of “censorship” espoused by Cruz was exquisitely identified by Ayn Rand (who Cruz claims to admire, but like his left-wing colleagues who share his same premises, has utterly failed to grasp):

“For years, the collectivists have been propagating the notion that a private individual’s refusal to finance an opponent is a violation of the opponent’s right of free speech and an act of ‘censorship.’

“It is ‘censorship,’ they claim, if a newspaper refuses to employ or publish writers whose ideas are diametrically opposed to its policy.

It is “censorship,” they claim, if businessmen refuse to advertise in a magazine that denounces, insults and smears them …

“And then there is Newton N. Minow [then chairman of the Federal Communications Commission] who declares: ‘There is censorship by ratings, by advertisers, by networks, by affiliates which reject programming offered to their areas.’ It is the same Mr. Minow who threatens to revoke the license of any station that does not comply with his views on programming—and who claims that that is not censorship …

“[This collectivist notion] means that the ability to provide the material tools for the expression of ideas deprives a man of the right to hold any ideas. It means that a publisher has to publish books he considers worthless, false or evil—that a T.V. sponsor has to finance commentators who choose to affront his convictions—that the owner of a newspaper must turn his editorial pages over to any young hooligan who clamors for the enslavement of the press. It means that one group of men acquires the ‘right’ to unlimited license—while another group is reduced to helpless irresponsibility.” [7]

Most ominous for all Americans who care about freedom is that Ted Cruz, by embracing the collectivist definition of “censorship,” joins the socialists across the political aisle in their war against capitalism and the principle of individual rights.

In attacking the principle of individual rights to advocate the anti-capitalist notion of “censorship” to win a partisan battle against Twitter, Ted Cruz reveals himself to be a fascist at war against America itself.

Twitter is not the real danger to freedom of speech; Ted Cruz and his colleagues who seek to expand the power of government to violate the inalienable property rights of Big-Tech companies are.

This article is part of a series on Big-Tech, Freedom of Speech, and Censorship. To be notified of future articles in this series by email, please sign up for our free Voice of Capitalism newsletter.

[3] It should hand-cuff the power of Cruz and others to regulate it and determine its content.

[5] The full quote from Thomas Jefferson in his 1782 Notes on Virginia: “But it does me no injury for my neighbor to say there are twenty gods or no God. It neither picks my pocket nor breaks my leg.” 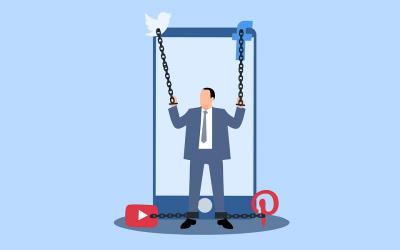