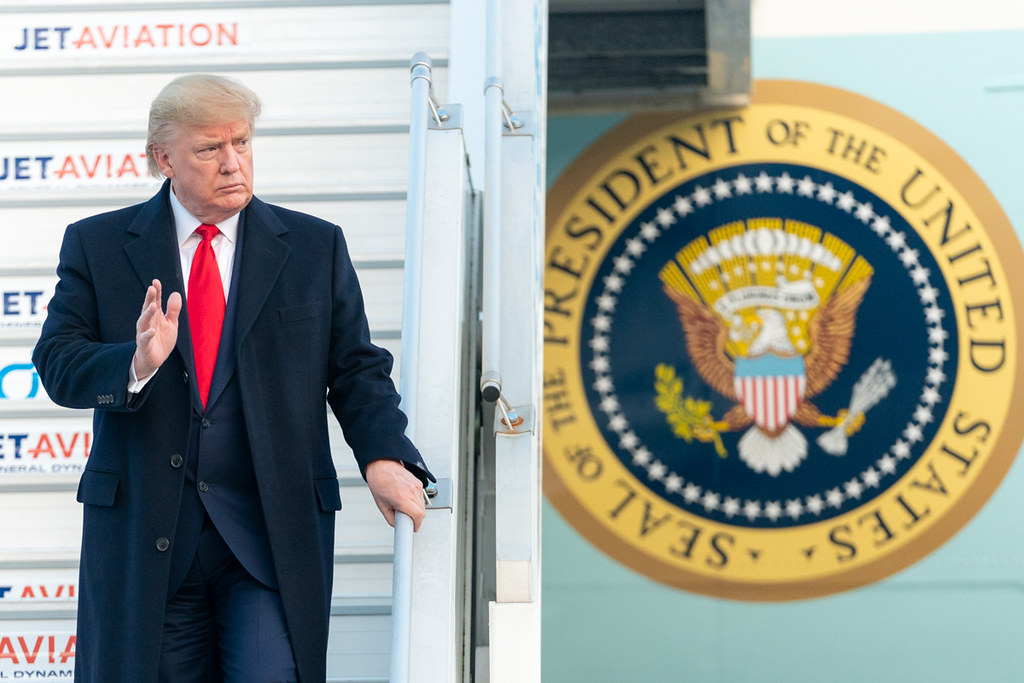 Whether one supports or disapproves of Trump (I strongly disapprove, for the record), one must accept that he opposes free trade, both in terms of goods and employment. Both his rhetoric and the data bear this out.

In his rhetoric, he clearly holds to the “zero-sum” fallacy. This is the view that there is always a loser in a trade; one person’s gain is another person’s loss. For example, he sees imports as subtracting from Americans’ wealth, so he wants exports to exceed imports or, at a minimum, to be quantitatively equal. If, on the other hand, we happen to import more than we export to a particular country, say China or Germany, he says we are being “ripped off.”

If we have lower tariffs compared with a particular country, he says we have an “unfair” trading arrangement, the other country is “stealing” from us, and American jobs are being “destroyed.”

Those are all his words. They reveal a profound ignorance of the fundamental principle in economics: all trade is mutually beneficial. This is true to whatever degree it is permitted to occur, even if one side or the other has impaired it by imposing taxes or tariffs on goods. (Note: a “tariff” is simply another word for “tax,” except it is a tax imposed when a good crosses an international boundary.)

In contrast to Trump’s belief, trade is “positive-sum”; both parties gain.

Accordingly, any tax or tariff — imposed by either side — hurts both parties to a trade by making the goods more expensive and thereby reducing trade volume. This means that every American or Chinese tariff is paid for by both Chinese and American consumers and producers. Any and all tariffs are destructive to all parties, regardless of which side imposes them.

This lesson in economics was discovered by and motivated the great economic works by Adam Smith, David Ricardo, and later economists who wrote against the fallacious doctrine of mercantilism that had earlier dominated economic thinking. In his seminal work The Wealth of Nations (1776), Adam Smith explained the wealth-destroying inefficiency of using tariffs to “protect” domestic industry with this example:

By means of glasses, hotbeds, and hotwalls, very good grapes can be raised in Scotland, and very good wine too can be made of them at about thirty times the expense for which at least equally good can be brought from foreign countries. Would it be a reasonable law to prohibit the importation of all foreign wines, merely to encourage the making of claret and burgundy in Scotland?

Scotland is a cold country and it makes no sense to grow grapes there. Rather, Scottish producers should make what they are good at, say smoked salmon or wool, and trade it for wine from Italy. Or, to cite a more modern example, should the U.S. grow its own bananas in expensive hothouses, or just buy them from Central America by trading goods we specialize in making, such as computers? The principle of comparative advantage is that each country should produce what it is good at — what it has a “comparative advantage” in — and then trade for the other goods it needs.

Interestingly, one implication of this insight into tariffs is that a country is better off if it unilaterally reduces tariffs on goods even if its trading partners do not equivalently reduce tariffs and instead maintain them at a higher level.

The United Kingdom followed this policy when it unilaterally lowered and eliminated major tariffs in the 19th century even when its trading partners often did not. The result was prosperity across the world as global trade expanded.

In terms of data, tariff revenue to the US Treasury has risen dramatically, offering graphic evidence of the wide scope of Trump’s protectionist tariff increases. Such an increase in revenue is not a good thing. It testifies to the loss of wealth-creating trade that has hurt business owners and consumers in the US and across the world.

It also reflects a deep undermining of capitalism by reducing the division of labor as production gets Balkanized and each country is forced to produce goods for which it does not have a comparative advantage. A reduction in the division of labor through reduced trade makes all of us poorer than we would otherwise be.

Classical economists Adam Smith in The Wealth of Nations and David Ricardo demonstrated that each country should produce what it is most efficient at producing and then trade for the other goods it needs. This results in the greatest wealth for all parties. This was the basic discovery made by economists in the 18th and early 19th centuries. It is a foundational principle in economics. Trump’s return to earlier mercantilist ideas is the equivalent of returning to the view that the earth is flat.

Similar arguments as the above apply to the flow of people. Trump has significantly reduced the “importation” of all classes of immigrants including, notably, highly skilled workers such as software engineers, who typically get H-1B visas. These are hardly the type of immigrants who would commit crimes or take welfare benefits, both of which are the reasons usually given for Trump’s restrictions on immigration.

Again, the data bear out Trump’s protectionism with regard to the immigration of highly skilled workers. Observe the significant reduction in H1-B visa approvals that began when Trump became president in 2017.

Metaphorically, software engineers can be seen as the “machines” that power hi-tech businesses. I once heard a speech by a famous venture capitalist and he simply referred to them as “engineers.” Procuring high-quality engineers (i.e., software engineers) is the overriding business challenge for the Silicon Valley firms that his venture capital firm funds. Trump’s severe immigration restrictions seriously undermine America’s hi-tech businesses by preventing these valuable workers from coming to our country.

Whether one likes or dislikes Trump, everyone must be objective about the facts of his words and actions. Trump is a protectionist in goods and people. He opposes free trade. One may attempt to make an argument that Trump is on balance beneficial (or better than the other side) because there are positives that outweigh the negatives. But those negatives, such as his hostility to trade and immigration, must be acknowledged as a starting point for any discussion.