The Fallacy of “We”

The “we fallacy” is ubiquitous, especially among professors, politicians, policy wonks, and pundits. The fallacy of “we” is a form of the fallacy argumentum ad populum or “appeal to the people,” to “popular opinion.” 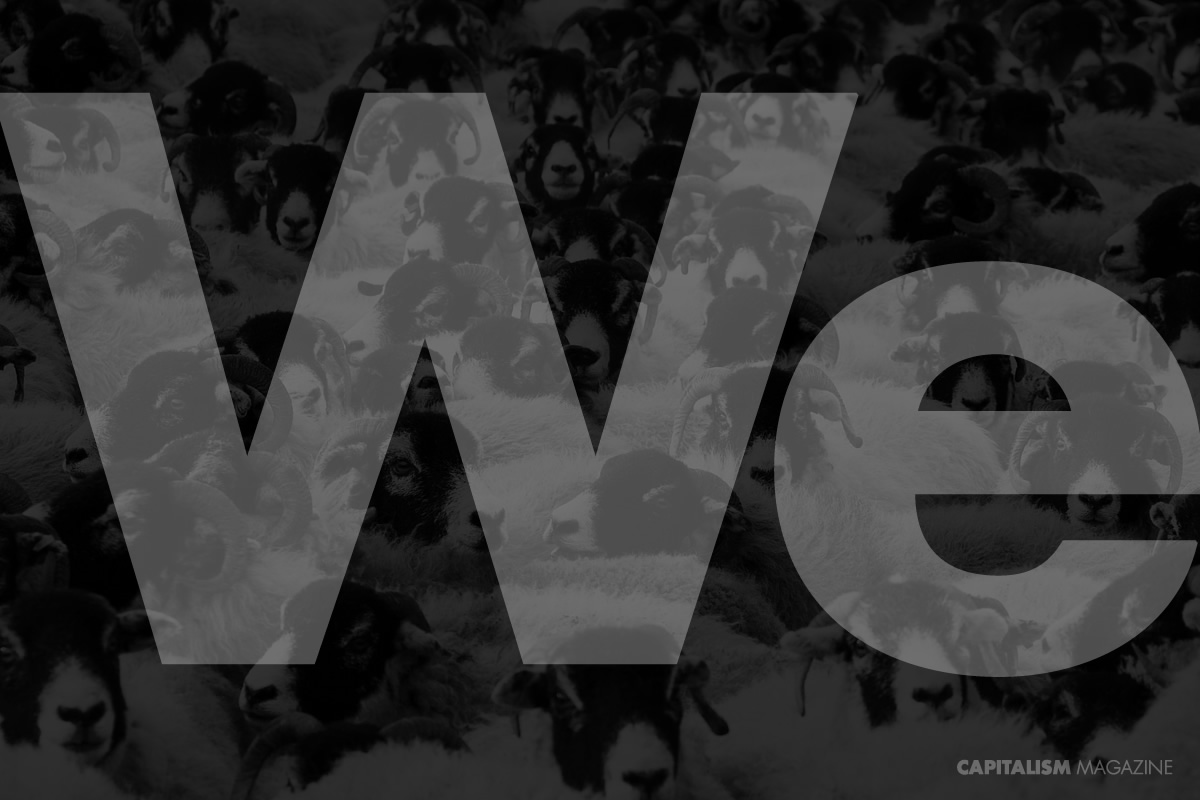 If you listen closely, you’ll hear it everywhere – and frequently. “We can’t know anything for certain.” “We are our brother’s keeper.” “As a society we must help the poor and cure poverty.” “We’re a nation of immigrants, so we should have open borders.” “We need a national energy policy.” “We must have an educated populace.’ “We should combat income and wealth inequality.” “We were right (or wrong) to fight the Wuhan virus by imposing Draconian lockdowns.”

Examples could be multiplied indefinitely; notice them over the coming few days. The “we fallacy” is ubiquitous, especially among professors, politicians, policy wonks, and pundits. Consider just two recent examples.

On March 22nd President Trump tweeted that “we cannot let the cure be worse than the problem itself. At the end of the 15-day period, we will make a decision as to which way we want to go.” On April 1st Neil Ferguson declared that “we don’t have a clear exit strategy,” for ending mandatory “lockdown” orders and getting back to work without risking a wider virus spread. Ferguson, a research scientist at Imperial College of London, was the man who only a month earlier instigated many of the world’s worst lockdown orders by predicting a excessively-high death rate of 4%, which he later lowered unilaterally to less than 1%. Mr. Trump, relying on public health advisors (Fauci, Birx) who have expressed deep faith in Ferguson’s apocalyptic predictions, has himself ensured that the “cure” (lockdown) has been far worse than the problem.

What you see in these two examples is a heavy use of “we.” But who is “we” exactly? Individuals? Groups? Experts? States? Is it all of these, or some of them, or a mix of them?  Who is the “we” that should not let the cure be worse than the problem? Millions of many now-idled individuals and firms might have been eager to avoid that error, perhaps by trying a policy of “herd immunity,” which in the past has successfully and quickly vanquished diseases. Were “we” free to try? No. Are “we” free now? No.

The phrasings of the “we people” assume that “we” (all) believe the same thing; sometimes they exploit others’ ignorance or insecurity, hoping they believe it. They rely on faith, not reason, on their whims, not facts.  Even if unanimity was possible, the “we folks” childishly believe the quantity of adherents determines the validity of a claim.  Something supposedly is true (epistemologically) or virtuous (morally) because so many people believe it – that there is both certitude and rectitude in the multitude.

The fallacy of “we” is a form of the fallacy argumentum ad populum or “appeal to the people,” to “popular opinion.” In epistemology it emerges as the coherence theory of truth, which clashes with the correspondence theory of truth. The coherence theory says an idea is true of it is compatible with other ideas one holds and/or with those held by others. The correspondence theory says an idea is true only if derived from (and validated by) the facts of reality, regardless of how many people hold the idea. Of course, fantasy worlds are “internally” consistent, but that doesn’t make them real.

Beyond epistemology, there is also a moral aspect to “the fallacy of we.” By now it is almost universally denied that ethics can be scientific, that a moral code can be objectively delineated and defended. It’s not true, but it’s popular, thus seen as true.[1] We’re taught that ethics must be based either on dogmatism or subjectivism, from a prophet’s scripture or one’s feelings. Again, it’s not true, but it’s a popular view.

Consider three possible sources of truth through the ages: vox dei (the voice of “God”), vox intellentia (the voice of reason), and vox populi (the voice of the people).  Medieval times held that whatever was heard from God or “his” prophets was true, while whatever commandments were issued were moral. Then came an anti-Medieval revolution, the Enlightenment, which held that only reason discerning reality could validate what was both true and moral. Then came the counter-Enlightenment of Kant-Hegel-Marx, ushering in the false and fatal idea that neither God nor reason but instead the masses determine what is true and moral.

On this latter view, if “the people” or any “consensus” endorses or condones belief in “flat earth” theories – or racism – or slavery – or anti-Semitism – or the end of the world as we know it in twelve years due to climate change – or anti-capitalism – then flat-earth-ism, racism, slavery, anti-Semitism, climate-ending apocalypse, and anti-capitalism are valid positions.  The only antidote to such nonsense is a consistent and principled return to reason – call it a renaissance of the original Enlightenment.

How did “we” get here? Why is the “we fallacy” so prominent?  “We” live in an age of collectivism, broadly, and majoritarianism specifically. The politics of it is only the most visible aspect. The root of political collectivism is collectivism in epistemology and morals. The predominant political dogma today holds that “majority rules” and may even override the rights of non-majorities. To be “partisan” is to be partial (not impartial) – hence biased (not balanced), hence extreme (not mainstream), hence “wrong” – while “bipartisan” support of virtually anything is sacrosanct. Not constitutional capitalism but unlimited democracy is seen as the best politics because it entails political rule “of, by and for the people” (in the Greek, demos = people) – even if they (or their representatives) are more ignorant than informed, more vicious than virtuous, more fickle than principled.

Notice on COVID-19, the “we” of public governance has overridden both personal governance and private governance, indeed, on a scale unseen in American history – and has been wholly unconstitutional.  It is likewise with Neil Ferguson, who suddenly worries that “we” have no exit strategy, even as he was critical to convincing the “we” of public governors to forcibly shut down the freedom and options of individuals and groups operating in their own, legitimate realms of governance. Having helped the public realm enter he cannot locate an exit but blames the failing not on himself but on “we.” This is irresponsible policymaking, not only because it’s based on bad models and forecasts; the deeper issue is the fallacy of we and the lack of accountability (punishment). Culpability is easily cloaked under the veil of “we.”

To the extent “we” have problems today dealing with COVID-19, it’s because there’s no sense of the proper balance of governance among the personal, private, and public. The “we” that’s most in charge these days consists largely of those working as public governors; they’re dictating what personal and private realms must do, allegedly to “mitigate” the harm of the COVID-19 virus – staying at home, out of work, and distancing from others, whether or not they’re sick or vulnerable.

Today “we” (the world?) has a real problem (let us suppose), but too few people know enough about what others are doing, or why, when, and how long. It’s a collective mess, because the method and core organizing principle is collectivist instead of individualist.  An individualist approach is also a more diversified approach which eschews the high-risk, one-size-fits-all policy; it’s an approach that leverages the specialty and respects the inviolability of each of the three realms of governance, which acknowledges the law of comparative advantage – that some functions are best left to the personal and private sectors, others to the public sector – an approach justified on both practical-efficiency grounds and moral grounds.

Challenging the “we folks”

The next time you hear that “we can’t know anything for certain,” recognize that the statement itself assumes a certitude – hence is self-refuting; if someone specifically is uncertain about something particularly, that’s their problem (or challenge), not yours; it says nothing about what many people know or don’t know. Likewise, if you hear that “we as a society must help the poor” – or “we must combat income and wealth inequality” – ask the speaker if he’s doing so himself, or along with a philanthropic group, and besides, why does he feel it necessary or proper to make his goals or values the goals and values of others without their consent and against their will. And so on.

The idea is to meet each “we fallacy” with the query; “Who is ‘we,’ exactly, and why should collectivism be your default, when individualism is the proper approach?

[1] Ayn Rand (1905-1982) is a rare case of a contemporary philosopher who demonstrates that ethics can be and should be objective, neither religiously dogmatic nor licentiously subjective. See “The Objectivist Ethics,” in The Virtue of Selfishness: A New Concept of Egoism (New American Library, 1964). On “the fallacy of we,” it’s worth mentioning that Rand’s dystopian novella, Anthem (1938) depicts a collectivist-authoritarian-impoverished future world where “I,” “me,” and “mine” have been expunged from the language (and from people’s minds, conceptually) and replaced with “we,”  “us,” and “our.”