The Real Meaning of the “Stimulus”: A 2.2 Trillion-Dollar Capital Consumption Program

The proper name for "government stimulus" is: "capital destruction." It's the unreplaced using up of the factors of production. 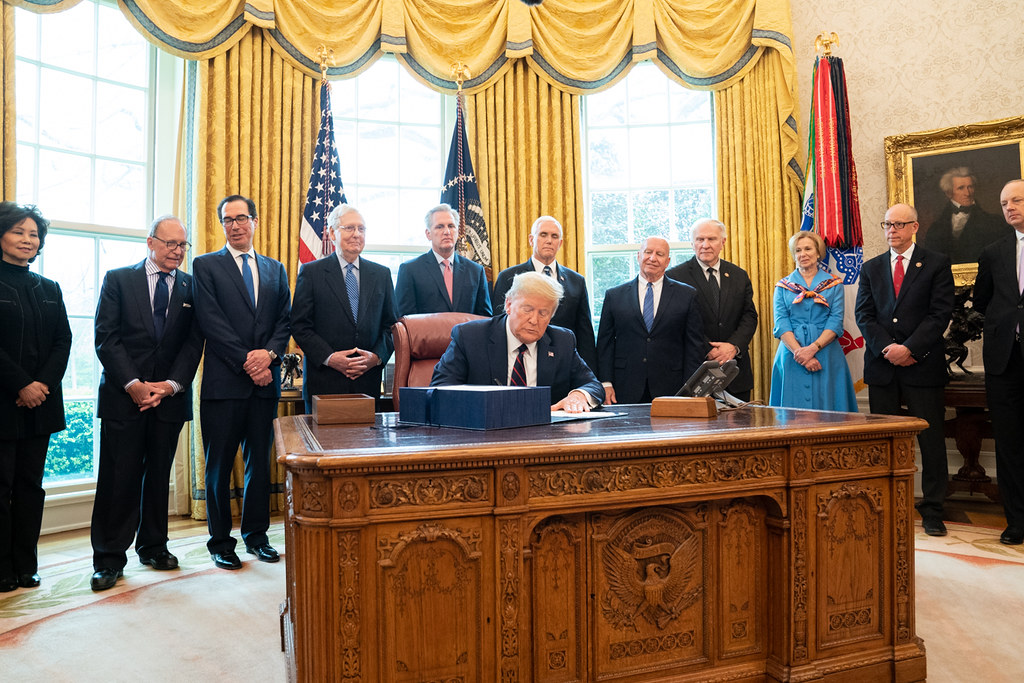 Proof is reduction [1]. In economics, reduction means, ultimately, tracing issues back to how they arise in a primitive, barter economy. To really understand the nature of the $2.2 trillion “stimulus,” we need to do that kind of reduction.

Fortunately, Ayn Rand already did it in her 1974 Ford Hall Forum talk, “Egalitarianism and Inflation,” which she summarized as “a metaphysical approach to economics: the cause, the mechanism, and the moral meaning of inflation.”[2]

The article is startlingly relevant to the “stimulus.” It is eye-opening and fascinating reading. Even though I quote from it here at some length, there’s much more wonderful material in the article, which is reprinted in Philosophy: Who Needs It.

Let us start at the beginning. Observe the fact that, as a human being, you are compelled by nature to eat at least once a day. In a modern American city, this is not a major problem. You can carry your sustenance in your pocket–in the form of a few coins. You can give it no thought, you can skip meals, and, when you’re hungry, you can grab a sandwich or open a can of food–which, you believe, will always be there.

But project what the necessity to eat would mean in nature, i.e., if you were alone in a primeval wilderness. Hunger, nature’s ultimatum, would make demands on you daily, but the satisfaction of the demands would not be available immediately: the satisfaction takes time–and tools. It takes time to hunt and to make your weapons. You have other needs as well. You need clothing–it takes time to kill a leopard and to get its skin. You need shelter–it takes time to build a hut, and food to sustain you while you’re building it. The satisfaction of your daily physical needs would absorb all of your time. Observe that time is the price of your survival, and that it has to be paid in advance.

Would it make any difference if there were ten of you, instead of one? If there were a hundred of you? A thousand? A hundred thousand? Do not let the numbers confuse you: in regard to nature, the facts will remain inexorably the same. Socially, the large numbers may enable some men to enslave others and to live without effort, but unless a sufficient number of men are able to hunt, all of you will perish and so will your rulers.

The issue becomes much clearer when you discover agriculture. You can survive more safely and comfortably by planting seeds and collecting a harvest months later–on condition that you comply with two absolutes of nature: you must save enough of your harvest to feed you until the next harvest, and, above all, you must save enough seeds to plant your next harvest.

You may run short on your own food, you may have to skimp and go half-hungry, but, under penalty of death, you do not touch your stock seed; if you do, you’re through.

Agriculture is the first step toward civilization, because it requires a significant advance in men’s conceptual development: it requires that they grasp two cardinal concepts which the perceptual, concrete-bound mentality of the hunters could not grasp fully: time and savings. Once you grasp these, you have grasped the three essentials of human survival: time-savings-production. You have grasped the fact that production is not a matter confined to the immediate moment, but a continuous process, and that production is fueled by previous production. The concept of “stock seed” unites the three essentials and applies not merely to agriculture, but much, much more widely: to all forms of productive work. Anything above the level of a savage’s precarious, hand-to-mouth existence requires savings. Savings buy time.

Next, she takes the example through trade and the division of labor, then explains why and how gold money emerges. She summarizes:

Money is the tool of men who have reached a high level of productivity and a long-range control over their lives. Money is not merely a tool of exchange: much more importantly, it is a tool of saving, which permits delayed consumption and buys time for future production.

I skip to her conclusion about gold money:

When you store your savings in the form of gold coins, they represent the goods which you have actually produced and which have gone to buy time for other producers, who will keep the productive process going, so that you’ll be able to trade your coins for goods any time you wish.

Finally, we read the cashing-in, which applies directly to the $2.2 trillion “stimulus”:

Now project what would happen to your community of a hundred hard-working, prosperous, forward-moving people, if one man were allowed to trade on your market, not by means of gold, but by means of paper–i.e., if he paid you, not with a material commodity, not with goods he had actually produced, but merely with a promissory note on his future production. This man takes your goods, but does not use them to support his own production; he does not produce at all–he merely consumes the goods.

In this lockdown, over 1/4 of the people are consuming without producing. Production is down radically.

When a man obtains a material value, such as an ear of corn, he can use it, save it, or trade it for some other material value. But trade doesn’t change the basic alternative: after the trade, both parties have the same alternative: to use or to save.

But “to save”—for what? To use in the future. So, the fundamental question is: how is the value used—to create even more material value (productive use) or in any other way (consumptive use)? When coal is burned to keep you cozy at home in winter, that is consumptive use. When coal is burned to run a power plant, that is productive use—provided that the power generated can be sold at a profit; otherwise, that coal is being wasted and wealth is being destroyed.

In a modern economy, savings are put to productive use right away. The wealth not being currently consumed by their owners is being consumed right now by others. In effect, the coal that Ken Danagger owns but is not using for his personal consumption is being burned to make Rearden Metal and to heat the homes of workers in exchange for their productive contributions.

In the current lockdown, fewer goods and services are being produced. To a great extent, that is matched by a reduction in personal consumption. Everyone is spending less on eating out, Starbucks, visits to the local pub, tickets to sporting events, vacation trips, and all the things we so look forward to doing again. And business-to-business productive uses of men and materials are down. Less jet fuel is being burned, less gasoline is being used, now that we’re “cowering in place,” as one columnist put it.

When you buy something, either you are spending income or you are spending savings. There’s no other alternative. You spend a dollar. Either that dollar was from income or from savings. There’s no other alternative. But everybody, including economists who know better, is engaged in a giant pretense: go ahead and spend that dollar: the payment will come from the government.

But the government has no money—and no real goods—of its own to give you. When you spend that dollar, the physical value it is traded for was produced, but the producer is getting nothing in return. It doesn’t matter that the producer gets the paper money that entitles him to pass on the same counterfeit money: in the aggregate, people are consuming—using up—goods that they couldn’t without this “stimulus.”

Output is down, but people are still using up food, electricity, clothing, etc. while they are forced to sit home, idle. They can’t be buying it with income, because they have no income. They are buying it with savings—their own, or those of the others looted by the “stimulus.”

The coal is still being burned in the out-of-work coal-miners’ homes. But the coal they would have mined isn’t there. They are burning the saved, stockpiled coal.

The proper name for “government stimulus” is: “capital destruction.” It’s the unreplaced using up of the factors of production.

It would be merely capital consumption, not capital destruction, if people were voluntarily living off their savings and, in some cases, charity. But once force enters, rational allocation of one’s assets becomes impossible. The result is later-regretted choices (“malinvestment”). Capital wasted on funding lower values at the expense of higher ones is capital destroyed. And force distorts the price system so that you can’t know the actual cost of things.

A concretization. If you were voluntarily reining in and spending some of your savings, you would spend on repairing your house’s roof, and forego repainting the outside. But the effect of the government’s counterfeiting is to think you can afford more than you actually can. So, you spend savings on steak and the more expensive cable TV package, only to find that prices have jumped, due to the “stimulus,” so your remaining savings are not sufficient to carry you through even the remainder of the lockdown unless you cancel all cable and switch from steak to spam.

A price rise is inevitable once you increase the money supply by 11% of GDP (so far) at the same time that the supply of goods and services produced has dropped by over 1/4 (going by published estimates).

I suppose, though this gets tricky, that a price rise could be partially or wholly avoided by drastically sacrificing the consumption of a large segment of the population. And that segment would be: older people, living on “fixed income.” That’s what the current interest rate of less than 1% accomplishes: the looting of the elderly. When, over the years, they set up their retirement savings plans, they rationally anticipated an interest rate of 3% to 5%. Now they find their savings woefully inadequate to support anything like the standard of living they saved for.

The passage of the $2.2 trillion “stimulus” makes that subjectivization fait accompli. At a stroke, the government guaranteed:

1. a sacrifice of the elderly to the young

2. a sacrifice of future production to current consumption

3. the wrecking of rational economic calculation, due to the subjectivized money and credit.

But the scariest part is that everyone, from Larry Kudlow to Nancy Pelosi, from CNBC to MSNBC, believes that this “rescue plan” was a good thing.