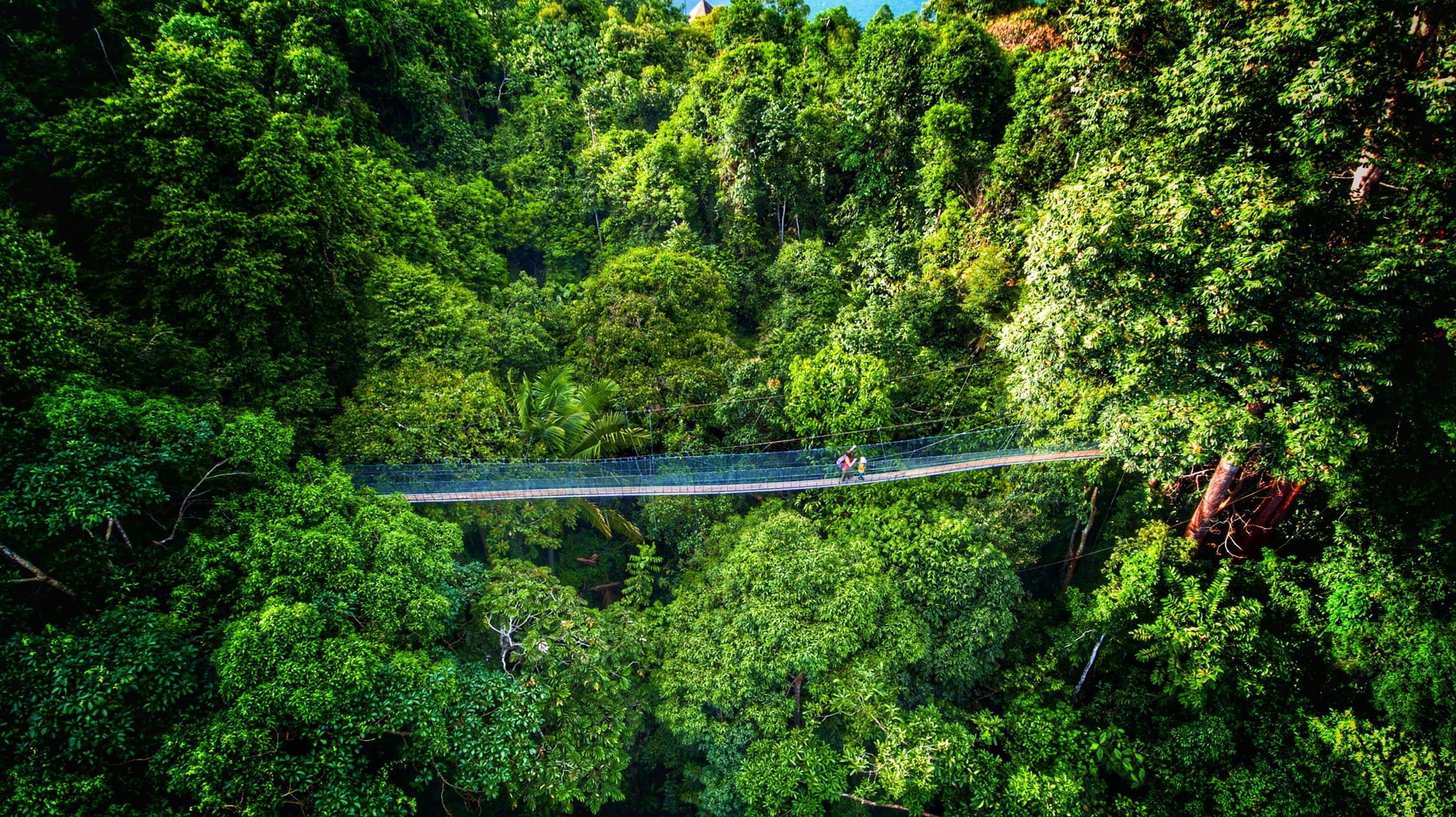 A couple of news cycles ago – before the corona scare had embraced us all, central banks went mad and governments operated at their worst – trees were briefly all the rage. Ranging from apocalyptic scares for cutting them down to utopian schemes for planting them, the debates over trees hardly ever seemed balanced. This time, if you remember, it was about lofty plans to plant a trillion trees in order to solve climate change; Trump said he’d sign on to the initiative and everyone lined up either to praise or criticize him accordingly.

Nobody, it seemed, stopped to think about whether planting trees was a good idea. And where it would be a good idea to reforest nature. All everybody could talk about was the climate services of forests and how impressive it was that even a poor country like Ethiopia managed to plant 350 million trees in a single day last summer (never mind if that number was even remotely accurate or if that was the best use of scarce resources in a very poor country).

Most rich countries are already re-growing their forests as their modern economies need less space to operate and their modern consumers are willing to pay for the additional peace and quiet (and yes, climate services) delivered by large and flourishing forests. In his book More From Less, Andrew McAfee showed that, since 1982, the U.S. has already given back to nature an area the size of Washington state: “After we stop farming the land, it eventually reverts to forest.”

While the U.S. may give land back to nature, poor countries are still clearing their forests, turning woodlands into farmland, firewood, and timber for export – as noticeably displayed in The Big Amazonian Scare of August last year. Contrary to popular opinion, poor countries clearing some forest is a good thing: poor and destitute people use the assets they control to feed their families and advance their economic well-being. Poor countries should chop down more trees – not spend its scarce resources planting them!

The British science writer Matt Ridley has this splendid story about the populations of wolves, tigers and lions. Wolves, he says, are increasing; tigers remain stable; and lion populations are falling. How come? Easy, says Ridley: wolves live in rich countries, tigers in middle-income countries, and lions in poor countries.

This story illustrates something that’s been obvious to those of us who cared to look: a population’s productive capacities are what drive their desire to protect the environment. Environmental protection, care for wildlife and rivers and oceans and air quality become valuable goals only after some basic economic needs are satisfied. They are “luxury” goods, taking positions higher up the Maslow hierarchy of needs and come into play only after a certain level of income has been achieved.

A recent paper by the World Bank and Tinbergen Institute researchers with lead author Bo Andrée offers some compelling evidence of this Kuznets curve for deforestation. At extremely low levels of income, the forest clearing of subsistence farmers for firewood is usually not enough to exceed forests’ natural growth by much, and so total deforestation levels remain low. At somewhat higher levels of income, where still-poor people start to seriously liquidate their forests’ assets – either by clearing them for more economically productive activities such as agriculture or by large-scale logging for export – deforestation rates increase rapidly.

This is usually where the analysis ends, and the ecologically conscious members of our society sound the alarm: forests are shrinking, and we must do everything in our power to stop poor people from harming nature. Add into the mix some angry slant against capitalism and raw material-hungry consumerism such that the final blame is ultimately placed at the feet of Westerners.

In language that implies this all-but-ensured apocalyptic destruction, the wholly unscientific metric of “football fields/minute” is introduced to describe the pace of rainforest clearing. Hardly ever is that vivid measure put into perspective by reporting the mind-bogglingly vast number of football fields that measures most countries’ forests.

The area of the Brazilian part of the Amazon alone is over a billion football fields, leaving Brazil with another 750 years’ worth of football-field-sized Amazonian forest left to clear. This is not to say that Brazilians can safely chop away at the Amazon for centuries as there might be tipping points and feedback loops before then; rather, this is to illustrate that the indescribably large areas cleared are matched by the even more unfathomably vast extent of the world’s largest rainforest.

Contrary to the short-sighted beliefs of environmental activists, the increase in a country’s deforestation rate that accompanies its early development does not go on indefinitely. At some point, other economic activities become more lucrative and the higher standard of living attainable through this alternative income allows people to pay for a cleaner environment and restored forests.

The literature on deforestation and economic development suggests some threshold numbers for when this change seems to happen. Matt Ridley cited a GDP/capita level of $4,500. A more recent figure by Jesús Crespo Cuaresma and co-authors reported $5,500 purchasing power-adjusted 2005 international dollars.

To get a rough idea of what we’re looking at I downloaded forest data from the UN Food and Agricultural Organization’s Global Forest Resource Assessment 2015 and the World Bank’s purchasing-power-parity GDP/capita for 2015 (the latest year the FRA report covers). Some countries don’t report numbers or are too small to have much impact (Micronesian or Caribbean island states) and others have unreliable GDP figures (e.g. Cuba and North Korea). After excluding them, I end up with a sample of 134 countries covering 93% of the earth’s land area, encompassing over 95% of the people inhabiting it: 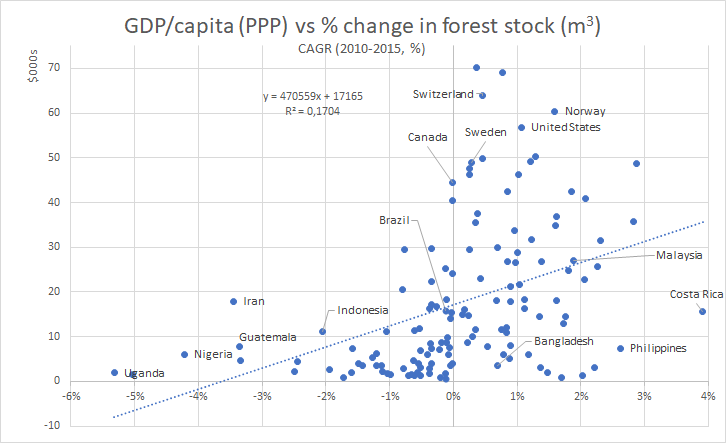 Not controlling for other factors (like urbanization, geography, oil reserves, political turmoil or initial extent of forests) and only looking at one time period (2010-2015) obviously limits what we can say about this simple plot. Still, the descriptive relation between income and deforestation supports what Ridley, Cuaresma and others have long argued: reforestation is positively associated with higher income levels.

Some countries with thriving logging businesses like Canada or Sweden still extract a remarkable amount of timber from their forests, but they are rich enough to treat their forests as long-term assets, letting their forests’ rate of regrowth exceed the rate at which trees are chopped down. At earlier stages of these countries’ development that wasn’t the case as their abundant forests served as primary energy sources, raw material and export earnings.

Why equally poor countries today should be prevented or persuaded not to use their natural assets as they see fit is not only historically ignorant but rather cruel. The threshold for net-zero deforestation in this simple scatter plot lies around $17,000 (PPP) – just shy of where Brazil is today.

Before a country reaches income levels of that magnitude, worrying about deforestation seems wholly misplaced.

What about Brazil and the Amazon?

As with many things, Brazil is the middle point of the world itself. Far from being an outlier that keeps shredding rainforest with the fervor of someone who pathologically despises nature, Brazil’s deforestation rate is exactly where we would expect it to be given its income level. The 9762 km2 of Amazon forest cleared between August 2018 and July 2019 that had the entire world on edge last summer was a rapid increase over the last few years’ remarkably low clearing in the Brazilian Amazon. In contrast to the hysteria last year, Amazon fires in Brazil came in a little below their two-decade average, with economic basket-case Venezuela and chaotic Bolivia showing much worse deforestation trends.

The apparently ecosystem-critical deforestation of 2019 represented no more than 0.17% of the part of Amazon vastness that lies within Brazil’s borders – not too far from the annual 0.12% net deforestation in the FRA data for Brazil between 2010 and 2015. Given the structure of the Brazilian economy (heavy producer and exporter of raw materials) and the poverty of large swathes of its people, we should expect it to make good use of its natural assets.

As one of the most unequal societies on the planet, much of Brazil’s rich and urban South enjoy living standards approaching European levels, while its rural and Amazon-dominated northers are on par with incomes seen in Belize, El Salvador or neighboring Guyana – all of which are still deforesting. Again: why shouldn’t they?

While Costa Rica, with its image as the capital of eco-tourism and “the first tropical country to have stopped and reversed deforestation,” is often held up as a role-model for forest preservation, its experience may have very little to teach poor countries. When Costa Rica reversed its deforestation trend in the 1990s, it was  already a comparatively rich developing nation – between two and five times richer than its closest peers and at a level that Brazil’s northern states are only now beginning to mirror.

Following decades of decline, an unusual thing happened. The rate of deforestation slowed and eventually dropped to zero, and over time the trees began to return. [The country] began to realize the potential of its rich ecosystems and set about safeguarding them.

As if ending deforestation was a simple matter of realizing the beauty of nature. Instead, economic growth made Ticos and Ticas rich enough to be able to protect and prioritize their natural environment.

Neither is the story “unusual” nor unexpected. Poor countries cut down more of their forests then naturally regrow or replant them; that’s nothing to worry about. Britain did it. European countries did it. America did it. With prosperity and wealth, that will end; all experiences we have with the environmental impact of growing countries suggest as much.

It’s fair to say that almost everyone wants to preserve nature – but that nobody wants to do it at the expense of their children going cold or hungry. For quite a lot of the world’s remaining poor, planting trees isn’t their main priority – and shouldn’t be.