Empty Shelves Are Not a Result of Free Market Capitalism 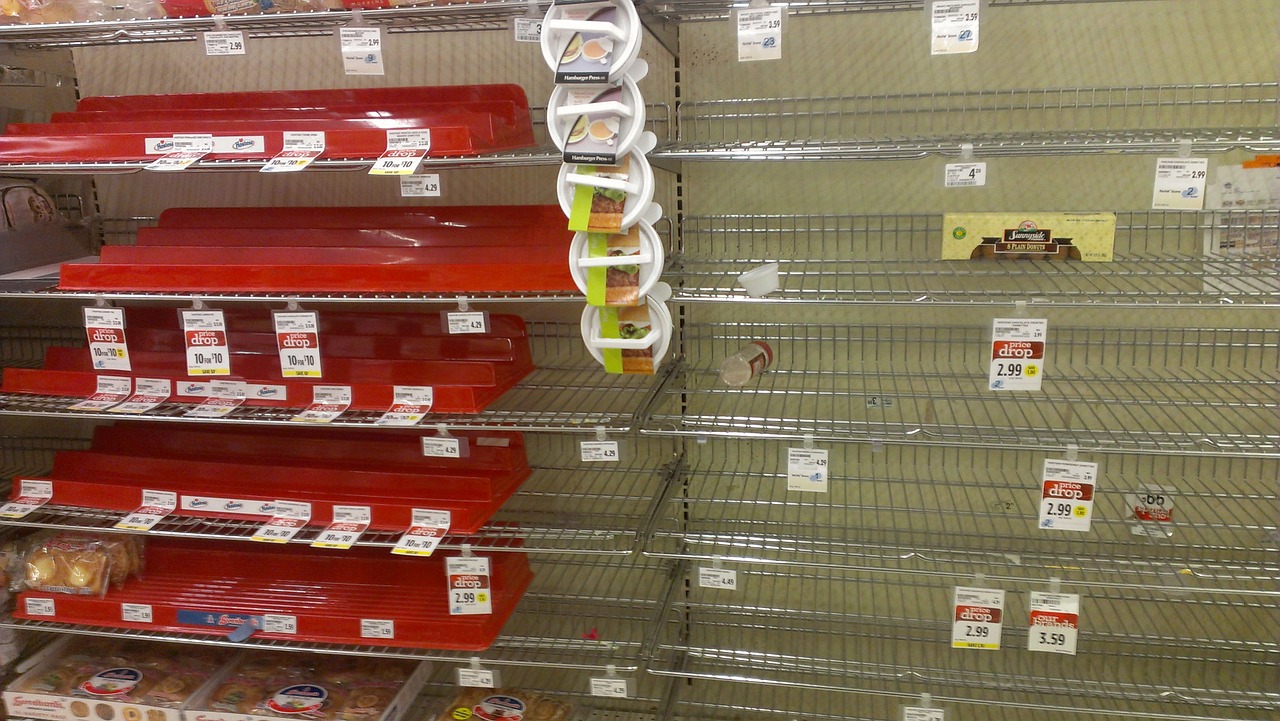 You’ve seen the pictures on your social media feeds: Empty shelves across America. Panic-buying. Hoarding. You might have even seen comments from self-described socialists saying, “Here’s what the US looks like under capitalism in a crisis” and perhaps mocking people who point to regularly empty store shelves in Venezuela as a condemnation of socialism. There are two problems with this, though. First, this is a temporary phenomenon brought on by a sudden panic. Shelves emptied by panic buyers are rare in free market economies and frequent in alleged workers’ paradises.

Second, and importantly, this is exactly what the supply-and-demand model we teach in introductory economics courses predicts when we actively prevent the free market from functioning. The shelves aren’t empty because of free-market capitalism. They’re empty because of active interference with free-market capitalism. Specifically, governments aren’t letting prices change to reflect new market conditions.

States are declaring states of emergency, perhaps rightly so in light of some of the risks we likely face as COVID-19 spreads. Bundled with sensible emergency measures like recommendations about social distancing, touching others, and so on are price controls as politicians rattle their sabers about “price gouging” and “profiteering.”

These are basically embargoes on knowledge. Higher prices serve a crucial social role by asking people to think a little harder about whether or not they really need that much hand sanitizer or toilet paper or whether they might be able to get by with a little less. The unintended consequence? There’s a roll of toilet paper or a bottle of hand sanitizer waiting for the next person who wants it at the market price.

This gets turned upside-down when we go after so-called “price gougers.” Grotesquely, they get tarred as villains while it’s actually the politicians who are making the problem worse by interfering with prices. They are outraged that prices are rising in the face of high demand and uncertain future supply, but that’s exactly what prices should do under these circumstances.

A lot of this stems from a fundamental confusion about cost. Critics and activists think that someone is selling unacceptably “above cost” and reaping an illegitimate windfall profit when they charge a price that is a lot higher than what they paid for the product from a wholesaler plus a “reasonable” profit.

At this point, people might be objecting, “But demand is a reflection of willingness and ability to pay, so it might be unfair to the poor.” This makes intuitive sense, but I think there’s a serious complication with the “ability to pay” qualification: namely, if you are fortunate enough to spend your last $2 on a roll of toilet paper for which the person behind you is willing to pay $5, then you are actually sacrificing not $2 for the roll of toilet paper, but $5. You’re “paying,” albeit implicitly, by not selling the toilet paper for $5 — and you are, therefore, demonstrating an “ability to pay” of $5.

This is similar to an example I’m fond of using when I teach about opportunity costs. Think about tickets to sporting events. Suppose tickets to the Big Game are going for $500 each. By sheer luck, you find a ticket on the ground. Does this mean you now get to go to the game for “free?”

No. Going to the game still costs you $500 (plus the opportunity cost of your time). You could have sold the ticket for $500, but you chose to go to the game. Fundamentally, there’s no difference between finding $500 on the ground and buying a ticket with it and finding a ticket on the ground that you could sell for $500.

Hence, I’m skeptical of “ability to pay” as an objection to high prices during disasters unless transaction costs are really high — and even then, I think the solution is to identify and overcome the sources of the transaction costs.

But shouldn’t people charge low prices because it’s the right thing to do? Maybe. People respond to a complex mix of incentives and motivations, and one of the more heartening responses to the COVID-19 outbreak has been the way in which a lot of publishers have opened up their online products for students and instructors suddenly faced with moving their courses online. Benevolence is one motivation among many, though, and the fact remains that we get a lot more hand sanitizer, toilet paper, and other supplies when we make room for people who are just in it for the money.

You may not like their motivations, but they’re doing something your state’s governor and attorney general aren’t doing. Namely, they’re getting valuable emergency supplies into your hands. Maybe humanitarian impulses are elegant and more civilized ways of getting goods into the hands of the needy compared to the profit motive, just as a lightsaber might be an elegant and more civilized way of killing an enemy than a blaster. At the end of the day, though, both motivations (just like both weapons) get the job done.

As the economist Yoram Barzel explained in his under-appreciated paper “A Theory of Rationing by Waiting,” it’s hard to give away money in a way that actually helps the people we want to help. As economists point out whenever price ceilings come up, price ceilings don’t reduce what we pay. They change how we pay, with more of the putative benefits of our purchases being consumed by search costs. Someone waiting in a long line for low-priced hand sanitizer and toilet paper is incurring a cost (his valuable time) but not producing a benefit for someone else.

Here’s a real-life illustration. Various outlets report that a Tennessee man bought 17,700 bottles of hand sanitizer with a view toward selling them at a markup online. Amazon refuses to do business with him, which is their right as a private firm. However, they would probably expose themselves to multiple price-gouging prosecutions were they to allow him to sell hand sanitizer at a hefty markup via their site.

This is a difficult time for a lot of people, and it’s understandable and admirably humane to want to help others in their time of need. We aren’t doing them any favors, however, by saying that they won’t be allowed to pay very much for a bottle of hand sanitizer they can’t get anyway.