Clint Eastwood (J. Edgar, American Sniper, Gran Torino, Sully, Invictus, The 15:17 to Paris) surprises me again with another excellent motion picture. It’s another of Clint Eastwood’s movies for Warner Bros., which is owned by AT&T. Extremely true to facts about the Atlanta Summer Olympics bombing of 1996, it’s another movie about a persecuted white male. In fact, this persecuted white male was vilified. He was almost destroyed. He was completely innocent. There was no reason to attack him. He was railroaded by the United States government, specifically, the federal police known as the FBI (how’s that for relevance).

His name is Richard Jewell.

By titling his movie, sharply written by Billy Ray (The Hunger Games), with the name of the individual unjustly accused, persecuted and ruined by the U.S. government, Mr. Eastwood carefully and unequivocally draws your focus to the one against the mob. Indeed, this unreleased movie’s already being smeared by the Me, Too movement and attacked by the media. Yet Richard Jewell is unassailable in depicting the awful truth of what America’s press, state, and public did in fact to Richard Jewell.

Never mind that Richard Jewell‘s uncannily timely, with its scathing indictment of today’s abuse of government power, media sensationalism, entrenched government officials for the status quo and police power-lust and parasites that live through damaging decent, productive Americans through unsubstantiated claims and arbitrary assertions. That’s all cake icing, itself a credit to Clint Eastwood’s vision and sense of justice, peppered with references to John Wayne, cowboys and real, not artificial, quid pro quo. 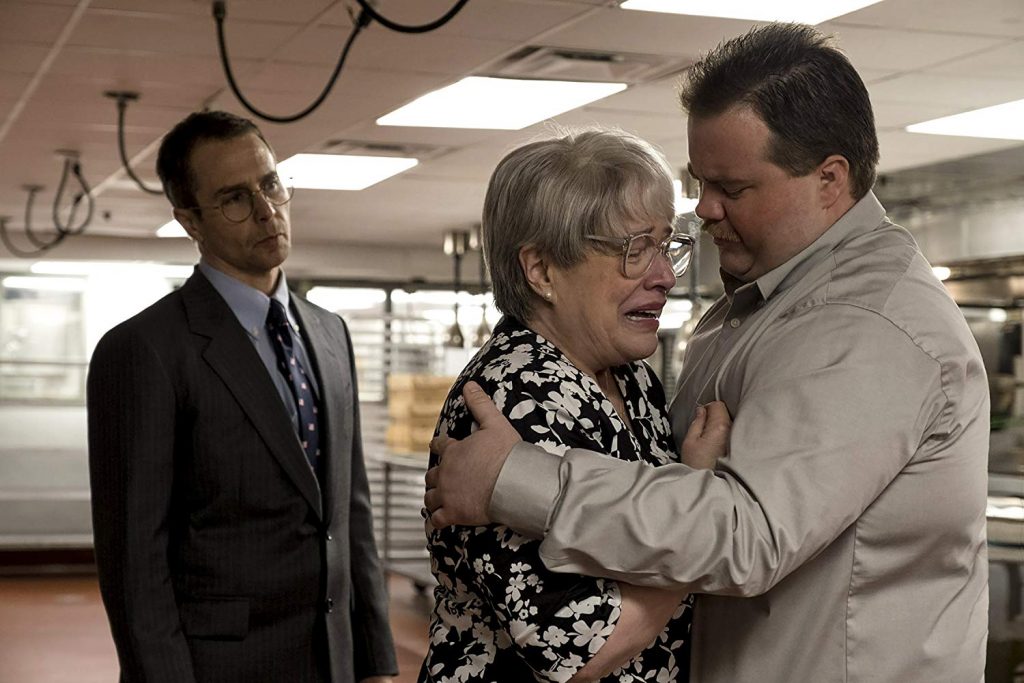 The real surprise of Richard Jewell lies in its deft and subtle scope. The taut, sparse and purposeful movie concentrates on Jewell, portrayed by Paul Walter Hauser in the year’s most emotional and best screen acting, a flawed, fat man who lived with his mother (fearless and exemplary Kathy Bates), worked as a policeman and private security guard and became an American hero.

But this is also the story of the American South, the son and mother bond, the bond between men who share values, the virtuous cop, the productive American, the lone, self-confident individualist and the few, kind, lonely and courageous souls that move the world. Richard Jewell ties together all of these and more, thanks to screenwriter Ray, director Eastwood, and the outstanding cast, and it does this with power, clarity and a thundering strike against the surveillance state and its Big Government control.

That said, Bates and Hauser are joined by Sam Rockwell (Three Billboards…) as a radical government lawyer, Jon Hamm (TV’s Mad Men) as an FBI agent and, in a career-best performance, Olivia Wilde (Cowboys & Aliens) as a skanky newspaper reporter. All five major cast members and others, including and especially Nina Arianda as an immigrant from a country where “when the government claims someone’s guilty, that’s how you know they’re innocent”.

Richard Jewell as played by Hauser packs a wallop but it’s loaded and packed with wisdom and lessons. How men comfort one another with affection and without shame. How a mother fears for her son, especially when he’s perceived as weaker and doesn’t look like most people assume heroes are supposed to look. How men who are sons protect their friends, mothers — and total strangers.

Jewell may be obese, kind and slow, and he talks with a Southern accent, so there’s that, yet he possesses a commanding and disarming eye for detail. Over and over, from his astute ability to listen, watch and take note of what’s essential to his sense of awareness of human physicality with particular decency toward people who are physically challenged in some way, the young “rent-a-cop” refuses to disable his powers of observation. It’s what ultimately mitigates the bomb’s deadly impact on the Summer Olympics in Atlanta’s Centennial Park, where he’s assigned to patrol with a mix of local, state and federal police.

But what gave the Federal Bureau of Investigation its reputation for being the federal bureaucracy of incompetence in the 1990s, due to the agency’s debacles at Ruby Ridge, Waco and its bungled and unsolved inquiry into the explosion of TWA Flight 800 10 days before the Atlanta Olympics bombing, seizes the hero’s life. Hamm’s and Wilde’s characters are, in this way, part of larger and corrupt institutions. That they both fan the corruption with fully conscious and fundamental choices is undeniable. They know exactly what they’re doing.

They know exactly why, too. They are small, petty, foul creatures. This is what makes Richard Jewell rise to the historic (and, I must say, amid this week’s congressional disclosures of evidence of the FBI’s astonishing rot, quite timely) occasion. When the weight of the world goes against the fat security guard and his mother, pushing you to prejudge them as flawed and suspect, it’s the Others, traipsing and gallivanting with fanfare, who are the fraudulent wannabes. It’s Jewell who stands up to scrutiny.

That he does so against impossible fraud, injustice and malice to destroy him is what makes Richard Jewell an elegiac American forewarning. The man who studied maps, logs and Vincent Bugliosi’s outstanding literary case against the butcher of Brentwood, Outrage, is aided by an individualist of law, principle and, as a poster on the wall suggests loyalty to individual “liberty”. Will their combined fidelity, bravery and integrity be enough to defend against the increasingly powerful state?

Richard Jewell in this sense poetically depicts and pays tribute to heroism while carefully showing you the truth, like Loving, of the cost of constantly fighting the corrupt, insidiously inflating Big Fat Government. It is not easy to watch. It is infuriating. Yet, as Hauser, Rockwell, Ray, and Eastwood push you to the brink by making too simple the tale of the one who guarded Americans against an act of terrorism and was persecuted for being honorable, Richard Jewell stirs you to cheer for his stealthily victorious reclamation of self-esteem. This is what makes Richard Jewell one of 2019’s best pictures. This is what makes Richard Jewell, with the woman who raised him, worth knowing as remarkably decent, heroic and larger than life.