The Joker depicts with a penetrating portrayal by Joaquin Phoenix of the much-maligned, non-college-bred white male, which is why the “social justice” thugs hate this film sight unseen, the various factors that breed one of today’s most persecuted minorities, the American outcast, into monsters.

Joker, seen in Hollywood’s historic Cinerama Dome, is as plain, satirical, and chilling as its title. There is no article. No Cesar Romero, no Jack Nicholson, no Heath Ledger to animate and add antics to this version of what begins the terrible Batman comic book villain. He’s just joker.

Aren’t we all? This is what director Todd Phillips, who co-wrote the script, aims to provoke the audience to think about. You there, so-and-so with the laughing face, knee-slapping after 30 seasons of Simpsons and neverending cynicism on South Park, Sopranos, Seinfeld, Saturday Night Live and every slice of sinister humor embedded in this culture from sniveling Greg Gutfeld to sniveling Bill Maher and, in particular, the late-night put-down set? You’re part of what’s driving man to madness and mayhem. Really. You are, Joker shows and tells. Here, Phillips depicts with a penetrating portrayal by Joaquin Phoenix (Her, Walk the Line) of the much-maligned, non-college-bred white male, which is why the “social justice” thugs hate this film sight unseen, the various factors that breed one of today’s most persecuted minorities, the American outcast, into monsters.

Comics fans, especially original Batman fans, and I am neither, will recognize the cues, though thankfully this isn’t one of those atrocious “Easter egg” Disney Marvel films in which the audience is expected to hunt and howl for ads, plugs and marketing tie-ins. But I see Joker as much as Antifa’s origins story as Joker’s. Want to know how the masked anarchist and his roving gang of socialist, anti-wealth thugs come to rule the streets? Here, again, have a look. This makes Joker less a great movie than an extremely disturbing social commentary, which is what I think it really is. It’s a good movie for what it is.

But it’s a scathing indictment of the cynical, Puritanical, maniacal axis which spawns attempts to sanitize the West of any sign of free thought, expression, and association, including “social justice” types’ attempts to squash and suppress this film, which echo the irrationalism of the Me, Too and similar movements. Joker certainly gushes blood and gore, but it owes more to 1976’s Network than other villain tales. In this sense, fanboys, geeks, and mindless Rotten Tomatoes types may spin into dumbed-down withdrawal from all the thought that’s gone into Joker and what comes off the screen. 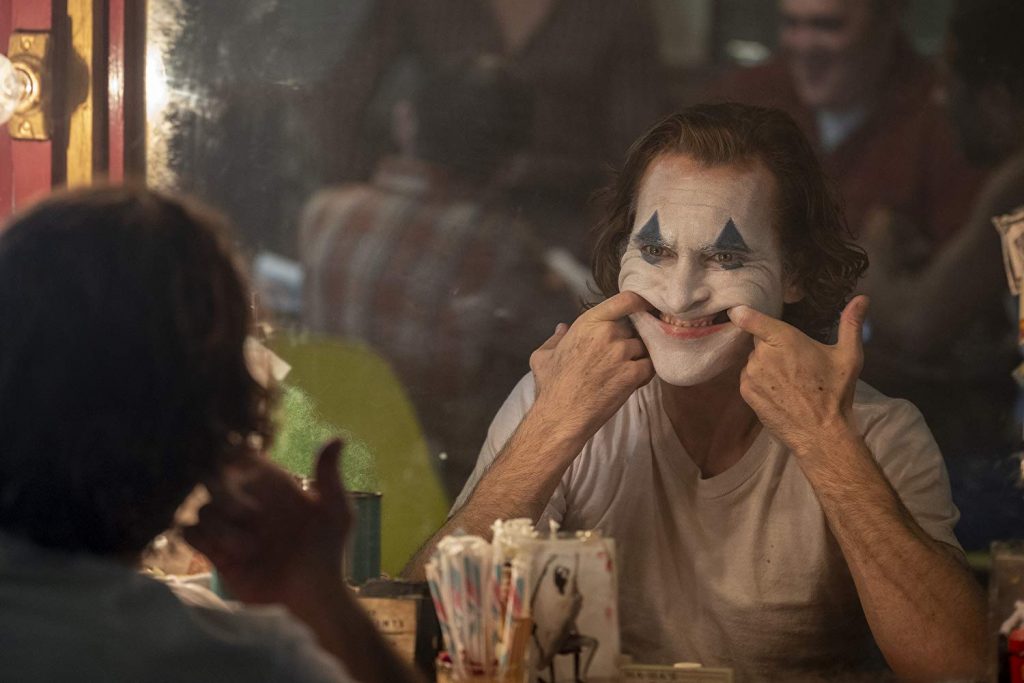 The setting, which is precisely accurate with one glaring videotape exception, is financially troubled New York City stand-in Gotham City in the 1970s, which the man deemed a joker listens to on the radio as he gets ready for work. The rich get richer in some vaguely cronyist society while everyone else gets poorer, especially the sick, weak, and creative. That he makes a living from holding a sign saying “everything must go” sets up the film’s theme that making a joke out of what one ought to take seriously breeds an utter and total abandonment of optimism, benevolence, and reason.

The lead character honestly does his best to remain human. He works. He takes help when it’s offered. He sees a mental health therapist. He keeps a journal. He takes care of his sick mother. He knows he’s losing a grip on reality, and he addresses this, too. His sole vice is that he smokes cigarettes. But he remains an outcast. Like so many of today’s malcontents, such as the mass murderer a policeman pointed out had pleaded for help when he was caught in a downward spiral, he is both spawned as monster and spurned as man. 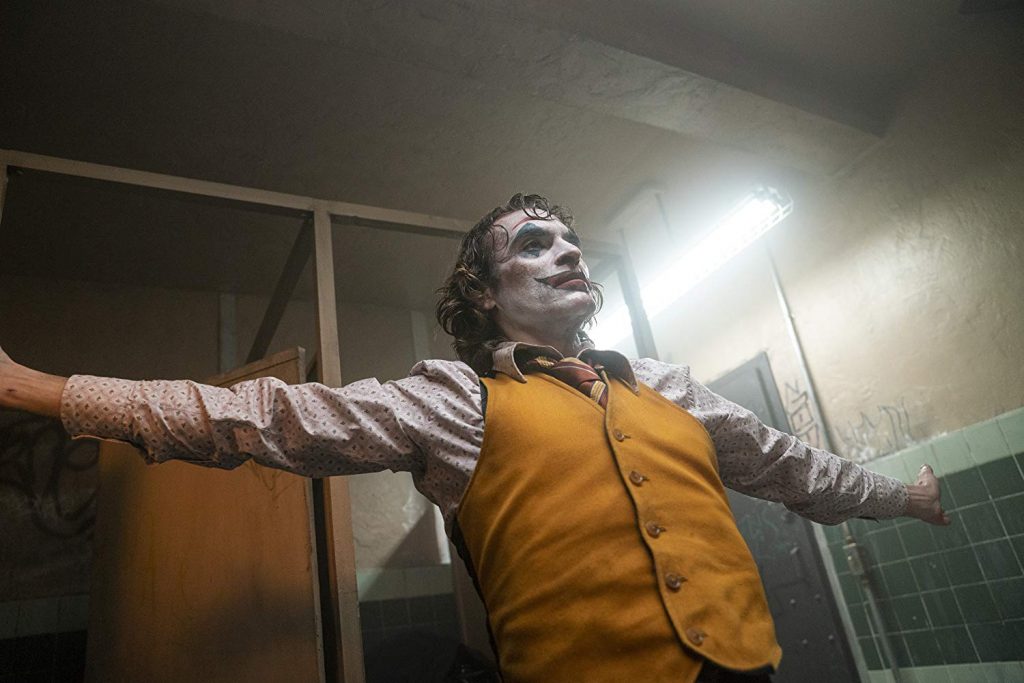 “The worst part of having a mental illness is people expect you to behave as if you DON’T,” he writes with a prophetic all caps in his journal. But he shows up, again and again and again, for Mother, for work as a promotional and children’s hospital clown, for therapy. Phillips in his best choice depicts the Joaquin Phoenix character facing a long flight of concrete stairs. You almost feel his weary body shrink from the sight of it. Knowing it’s a slog, he climbs, day after day, perhaps like you do, striving to make ends meet, to meet the demands of the day. Draw a bath for Mother, watch the late-night TV host (Robert De Niro, tying into his own performance in King of Comedy) check the mail, show up for work here, ride the subway there. Like those stairs, it’s a slog. 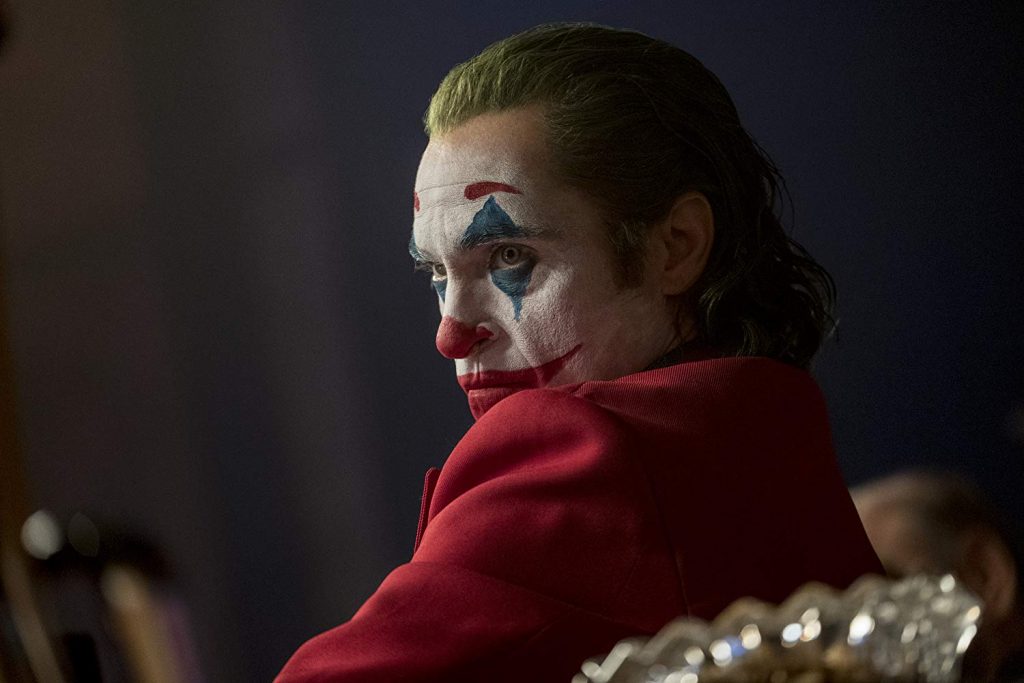 But the outcast, facing injustice, drudgery and worse, makes the effort. Perhaps like you do, too. This Joker counts upon. It’s like it knows one’s innermost struggles, shames, and hardships. And the toll hardship takes on clarity. It’s hard to say where he crosses the line into delusion, like a Jesus or an eco-freak railing against the rapture or the weather, or, appropriate to Joker, a nihilist raging against “the Man,” the rich or the corporation. But Joker dramatizes the cackle in the climb (and, later, in the descent) on those stairs. And in a stunning marker of a horrible crime on a one-tracked train gliding toward Gotham’s skyline like a viral bug racing toward the nerve center.

Lights flicker and dim, on the subway and in the hospital, as art by Stephen Sondheim and Charlie Chaplin accompanies the batty, emaciated clown’s modern interpretive dance, dolloping the film with an impending sense of loopy dread, doom and chronic despair. Whether in a street riot against the rich or a men’s room confrontation with a businessman turned politician, Joker gives a great sense of the character’s being alone, completely alone, the lonely one being beaten down and ridiculed while he dies laughing and, as some or much of the world seems right now, goes slowly insane. 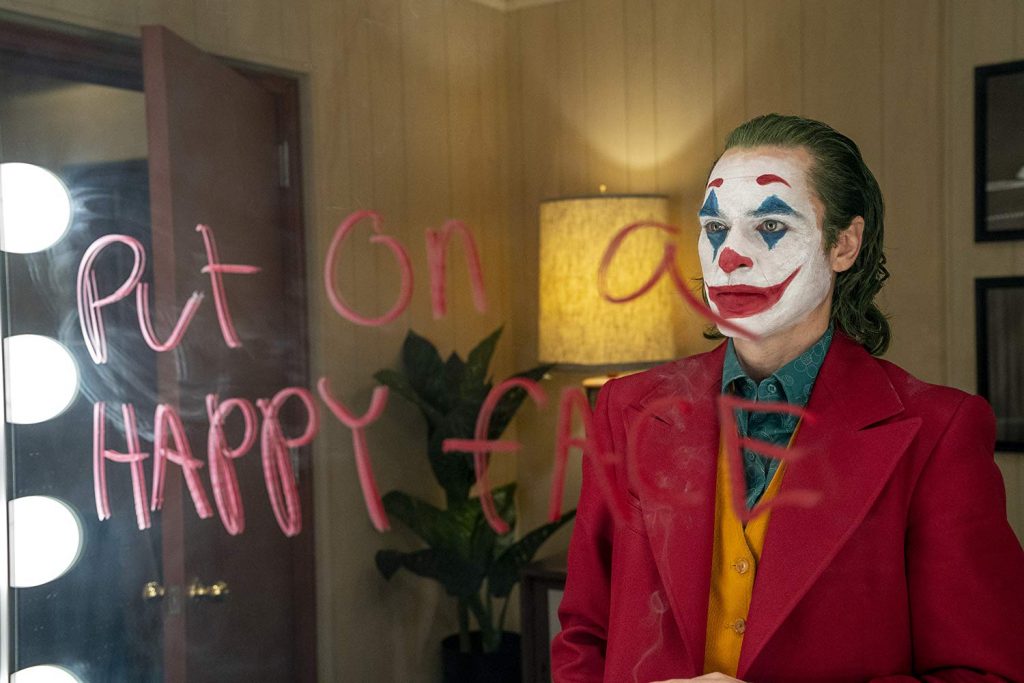 Finally, the misanthrope rides a graffiti-riddled bus crossing a bridge symbolizing perhaps his last moments of semblance before the mob subsumes his soul, as matters of motherhood, madness, and mayhem collide in one perfectly logical prelude to what putting on a happy face really means in practice. Smile or don’t smile; in Joker, the joke’s on you. More exactly, it’s on the cult of today’s code of Nothing Worship, which aggregates men’s thoughts, sneers at honesty and blurs the serious and the sniveling to the point of delusion while turning what Victor Hugo once called “the man who laughs” into the one who’s no longer able to distinguish what ought not to be destroyed.