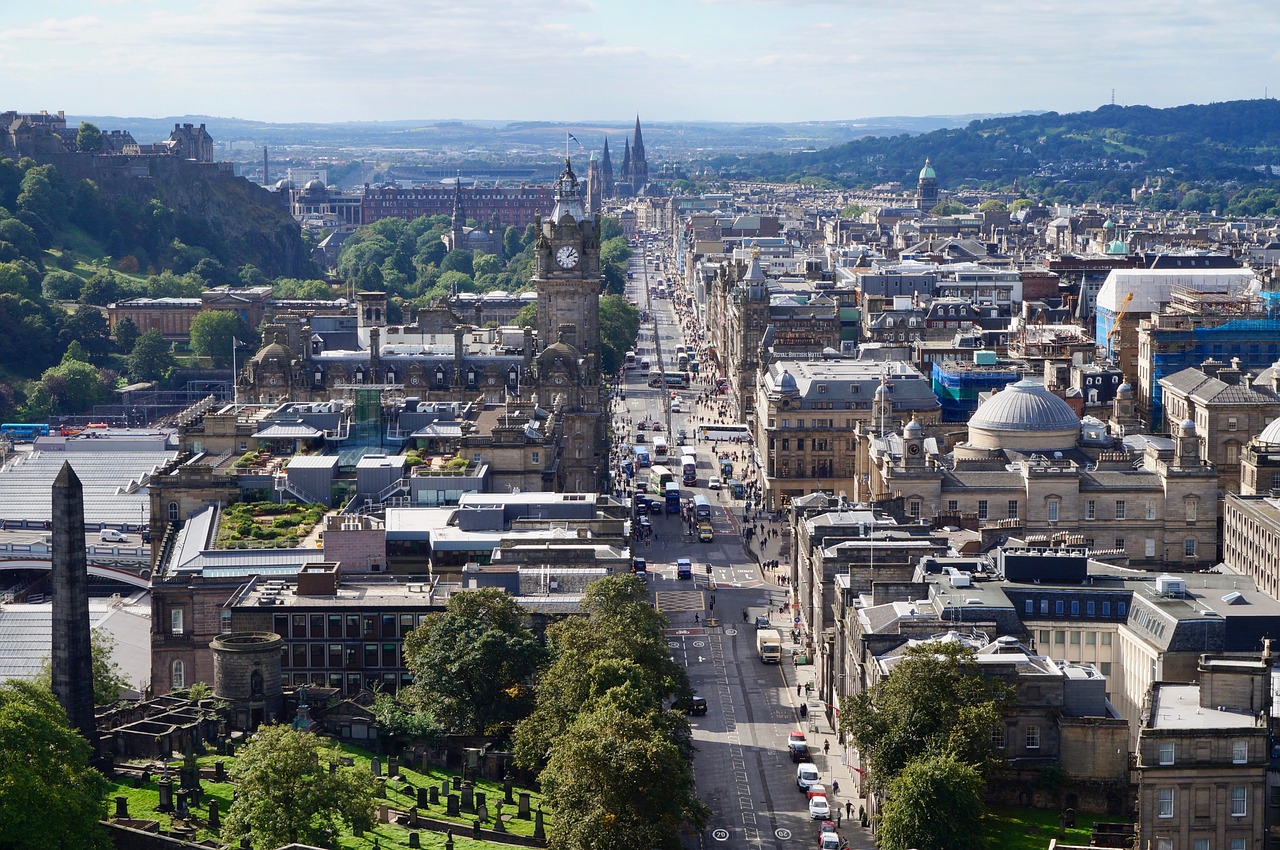 Scots often punch way above their weight. Whiskey, culture, music, accents — and, it turns out, banking and financial markets. Honing in on Edinburgh specifically, a city that for centuries has been known as the “city of money,” Ray Perman walks us through more than three centuries of finance.

And the story in The Rise and Fall of the City of Money: A Financial History of Edinburgh is as captivating as it is important: bank feuds and competition, cutting-edge investment vehicles and innovative banking products, bankrupt city councils, gentlemanly capitalism, and a plethora of collapses and bankruptcies before concluding with the 2008 spectacular collapse and associated government bailout of the world’s then-largest bank, the Royal Bank of Scotland.

Not exclusively limiting himself to Edinburgh, Perman includes a lot of general British banking history, particularly Scottish banking history. In what seems odd at first, this virtual walking tour of Edinburgh presents the reader with many details of the city’s architectural past. On further consideration, the fit makes perfect sense as construction and finance were crucial companions in raising funds for large-scale projects like buildings, bridges, ports, and other products of urbanization. Indeed, all kinds of complicated arrangements were made between developers, banks, the Edinburgh city council, and wealthy investors; from land developments and bridges in the 1760s to the canals and later railways connecting the knowledge economy of Edinburgh with the merchant-dominated commercial hub of Glasgow, bank and financial market financing played crucial roles.

The structure of the book involves digestible chapters organized into four parts, roughly covering (1) the 1690s to the Napoleonic Wars; (2) the thriving of the Scottish banking business until after the 1878 City of Glasgow Bank collapse; (3) the first globalization and World War I along with the financial repression of the 1950s and 1960s; and finally, in the last eight chapters, a comprehensive picture of (4) the British version of the 2007–8 banking crisis from the point of view of the two Scottish banking behemoths, (Halifax) Bank of Scotland and the Royal Bank of Scotland.

Perman begins and ends his long-run story with two eventful and disaster-prone decades, the 1690s and the 2000s, respectively, and expertly walks us through many fascinating episodes in between.

During Scotland’s disastrous “ill years” in the mid-1690s, Thomas Deane and other Scottish merchants drew up plans for the establishment of a Scottish version of the successfully launched Bank of England in 1694. The Scottish bank was far from an exact copy of the Bank of England, most importantly because of its strict prohibition from lending to the government. Instead, the Bank of Scotland was created as a privately run commercial bank with the explicit purpose of advancing the trade and industries of Scotland by solving a long-experienced funding shortage. While there were always lenders, even before banks, the volume of loans was rarely enough for a growing economy and Scottish bills of exchange were usually discounted in London at exorbitant rates of 10 to 15 percent.

Deane and the serial entrepreneur John Holland acquired parliamentary approval in 1695, and the Bank of Scotland opened for business in 1696. Initially a very cautious bank (maximum one-year loans, all loans collateralized and callable on 30 days’ notice), its aggressive note issuing quickly spelled trouble: it suspended specie payments on at least three occasions over its first few decades, and a fourth time in response to a note-raid attack in 1728 by its newly created rival, the Royal Bank of Scotland.

Through an accident of history, the 1707 Act of Union between Scotland and England kept Scottish legal traditions intact and the Scottish banking system free of those restrictions (note-issue restrictions and the six-partner rule) that kept banks small and undiversified south of the border. The era of so-called “free banking,” conventionally dated from the mid-1700s to the Bank Act of Scotland in 1845, overlapped with the rapid growth of the Scottish economy. Edinburgh became a dominant financial center in its own right, and the thriving colonial trade (and later shipbuilding) in Glasgow contributed to the ravenous demand for, and benefits of, financial services.

Perman points to the peculiarities of The Equivalent — the payment of English gold and Exchequer bills that constituted Scotland’s share of the formerly English government debt — and the economizing use of paper money by the Bank of Scotland in explaining the three centuries of innovative banking that followed. A surprising number of banking practices that we take for granted today were created and perfected by Scottish bankers: the overdraft facility, paying interest on deposits, widespread use of banknotes, interbank clearing exchanges, small-denomination notes, and later savings accounts. Pension systems and actuarially sound insurance schemes were also introduced and developed in Scotland in the 18th and 19th centuries, as were the Dundonian Robert Fleming’s investment trusts — the forerunner to mutual savings funds.

Perman expertly touches on some of the foundational questions of financial history — for example, why study the past orr the actions and consequences of past investors or banks long since disappeared? “Although history never repeats itself exactly,” Perman admits in the book’s preface, “there are some things that do not change.” Financial markets and banking crises are splendid examples of this. Banks collapse in the same way: through insolvency, jargon for making too many loans that lenders cannot service, or illiquidity, by being refused renewal of their funding by creditors who no longer trust the bank’s solvency.

Securities whose values rose and fell were capable of creating riches and supporting economic growth at any point in Perman’s overview — and just as capable of returning unfortunate or overzealous speculators to the rags they once came from. While investment vehicles or the kind of financial instruments traded (and most certainly the speed and quality of information) may differ, asset markets remain very much the same as they did in Walter Scott’s or John Campbell’s or Alexander Fordyce’s days — these gentlemen being no more than a selection of the overwhelming number of characters we meet in this character-dense book. An easily accessible table or “family tree” might have been useful.

Depending on what topics interest the reader, some parts of the story seem under-analyzed and others excessively detailed. A dozen pages on the 1772 Ayr Bank crisis strikes me as insufficient — especially considering that recent books on the subject by Paul Kosmetatos and Tyler Goodspeed both span several hundred pages — while the personality-heavy accounts of the Bank of Scotland and the Royal Bank in the lead-up to the Great Financial Crisis, absorbing almost a third of the book, are definitely too much. Naturally, the era deserves much attention as the aftermath of the Great Financial Crisis effectively stripped Edinburgh of most of its financial importance that for three centuries had earned it its nickname. But since most of the last decades’ records are still subject to bank confidentiality, we have little to go on but newspaper speculations, opaque annual reports, hearsay, and general government reports. Based on such shaky evidence alone, it seems imprudent to dedicate such a large section of an otherwise-fascinating tale to the latest of Scotland’s financial disasters.

Let me mention one missed opportunity that seems particularly strange considering the author’s impressive grasp of Scottish banking history. In describing the political demands and justifications for the Bank of England’s liquidity support to (and the government’s capital injections into) the major banks during the financial crisis, Perman uncritically echoes the catastrophe-packed convictions of politicians and economists that “cash machines would be switched off” and “people would not get paid.” Yes, some savers might briefly struggle in accessing funds from an illiquid bank — and it would seem politically impossible to allow that to happen.

But not economically impossible.

Scottish banking history, so elaborately explored by Perman himself, had a workable cure for that — extended shareholder liability. Scottish banks that in the past failed to honor their depositors’ claims were declared bankrupt but rarely threatened unaware savers or the payment system with ruin. Knowing that bank owners would ultimately be forced to pay up and provide funds to work off their depositors’ claims, other banks — during the Western Bank of Scotland’s collapse in 1857, the 1878 collapse of City of Glasgow Bank, and a myriad of smaller bankruptcies — were quick to accept the outstanding notes at par. They effortlessly took over that part of the failing bank’s business that we are (politically) most concerned with: savers’ current account balances and immediate payments falling due.

In the 21st century, after years of repressive government regulation that unraveled an organically developed market regulatory system, this option is no longer available. And by removing the market’s own solution to collapsing banks, this unraveling forced electorate-sensitive governments to take up the residual risk and backstop the financial system that Scottish banks themselves so effectively regulated in the past.

Even in the heyday of unregulated Scottish banking, depositors did not lose money in bank collapses — shareholders and CEOs did. Indeed, when John Campbell became the Cashier of the Royal Bank in 1745 he had to deposit £10,000 (the “equivalent” of tens of millions of pounds today) to guarantee “the faithful discharge of his trust”; “in the event that a depositor could not get his money from the bank,” Perman writes, “it was the bank officer, rather than the bank as a legal entity, who stood behind it.”

While Perman discusses the contrast between jailing or financially punishing bankers who mismanaged their banks in the past with the fact that that most bankers involved in the 2007–8 crisis still walked away with most of their eye-watering pensions intact, he does not investigate the full institutional change in banks’ liability regulation. That detracts from his otherwise-splendid story.

A final missed opportunity is Perman’s neglect of the last decade. While he does comment on recent trends and mergers in Edinburgh-based asset management, he does not mention the city of money’s thriving fintech sector — nor the extensive accounting and back-office functions that provide an increasing share of employment in both Glasgow and Edinburgh. The city of money no longer includes the best, the largest, or the most innovative banks, but finance still runs deep in Edinburgh’s blood.