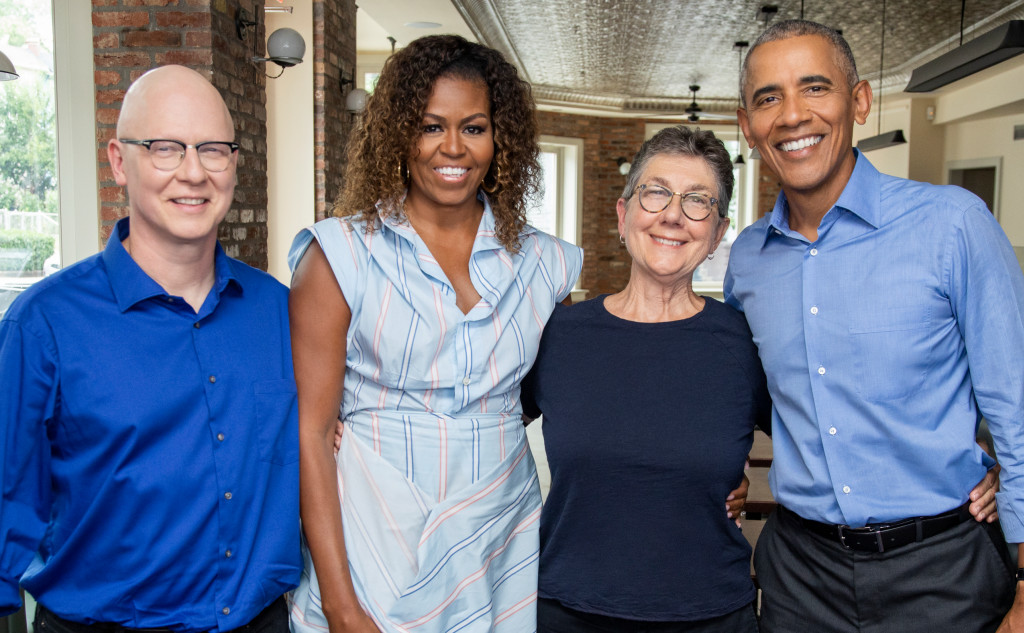 Higher Ground, the production company founded by Michelle and Barack Obama, has released the first of a planned seven-film series on Friday. American Factory chronicles the opening of a Chinese factory near Dayton, Ohio, where a GM plant closed in 2008. It’s reasonable to suppose that the point was to alarm us about the wiles of global capitalism. Oddly, the film might have the opposite effect on many viewers. It certainly did for me.

The documentary opens with a prayer on the day the plant closes as tearful workers see the last vehicle come off of the production line. A few years later, Fuyao Glass announced its intent to open a glass-production facility in the shuttered facility. One of our first glimpses is of a question and answer as American employees of the Chinese firm speak about the goals of the firm to prospective employees: they plan to employ several thousand people in all capacities, but mostly blue-collar work of the type that disappeared when the local GM plant shut down. One prospect asks if this will be a union shop. No, he is told. The plan is to be non-union.

Perhaps because of their proximity to widespread unemployment, everyone who heard that answer nods in agreement. This new factory is the only game in town, and the best news most of these out-of-work machinists and factory hands have heard in years.

Initially, most of the senior managers are Americans, but alongside the American workers are a group of Chinese workers. Also initially, most of the U.S. workers are deeply appreciative of the new opportunity. We follow one who, since the closing of the GM plan, has been reduced to living in her sister’s basement. Others have been out of work for some time, barely getting by on part-time work and odd jobs.

We don’t know how much of the documentary’s production choices were under the specific direction of the former president. Mr. Obama is sometimes astonishingly tone-deaf, as when, despite his regular trafficking with the global warming/climate change crowd — and more specifically in light of their incessant warnings about massive impending changes in sea levels and coastlines — he nevertheless purchased a $15 million estate on Martha’s Vineyard. If this is a story largely seeking to highlight differences in workplace culture, that objective is vastly overshadowed by the incredible arc that the formerly unemployed workers’ attitudes travel over a fairly short amount of time.

Initially, the woman who has been living in her sister’s basement has moved into an apartment. She extols her reacquired independence. Other employees bemoan their non-union pay and conditions but seem contented; they or friends and family have lost houses, have seen communities torn apart, and know firsthand the double impact of the so-called Great Recession and increasing competition from China. But even that wears off over time.

The work is sometimes dangerous, and the pay is lower than many of the workers have previously received, and before long thankfulness is replaced by myopia. Despite the company’s warnings, there are rumblings about unionization, and a United Automobile Workers agitator is caught walking through the private workspace with a “Union Yes” sign held aloft. The ineffectiveness of American managers to quash the unionization efforts leads to their sudden termination, and the Chinese CEO threatens to close the plant if it continues.

The same workers who, a short time before, were deeply appreciative of their unlikely bounty then begin to badmouth the company. Some are meeting secretly with union officials. Ultimately employees hold a vote, and the result is somewhat surprising.

There are two particularly telling moments in the film. In one, a Chinese manager teaches a class on how to deal with Americans, whom the Chinese line employees are training. Americans, he explains, need constant encouragement. It’s a hilarious and somewhat cringeworthy section.

In another, an employee at a local union hall complains to a cheering crowd that while he earned $27,000 last year, his nail-polishing daughter earned $40,000. Apparently, this man is unaware that there is absolutely no prohibition against his learning to paint nails for higher compensation — and with a daughter who does so, he has ready access to a highly cost-effective apprenticeship.

Despite intense lobbying and enthusiasm, the union effort is defeated. A number of the labor organizers are fired; most just sheepishly return to their duties. In one of the last scenes, we overhear plans to automate many of the jobs at the factory, which would eliminate more positions. There’s no way of knowing whether this was the plan all along or whether the shift in workers from contentment to intrigue was a key part of the decision-making calculus of the Chinese owners, but it wouldn’t be surprising if the collective bargaining bid accelerated automation plans. None of this is surprising, especially given Fuyao’s clearly stated position against collective bargaining from the very beginning.

It’s difficult for people to unlearn things they’ve grown up seeing, they’ve been told for decades, and for which they have apparent confirmation: the idea that union work naturally paid well and provided a generous raft of benefits was feasible in decades when international competition was virtually nonexistent. Throughout the ’50s, ’60s, and early ’70s, owing to the need for most of the rest of the world to rebuild after World War II, the establishment of the Iron Curtain, and the spread of collectivism throughout Asia, billions of potential competitors were simply out of the global mix. The dollar was king, and all of the major financial centers were in the Western Hemisphere.

But this period was an anomaly, even if wishful thinking sought to enshrine it as an indication of intrinsic American superiority: by the ’70s and ’80s, what was true all along finally became practicable. Markets opened, information began flowing, capital aggregated, and most of all people in other parts of the world proved that they were willing and able to do the work that Americans firmly believed only we could do. And our upstart labor competitors were willing, indeed appreciative of, the opportunities that sprung up.

There’s a common refrain from labor unionists and union members: the American worker is the best in the world — better than any of his international counterparts. It’s a feel-good, self-congratulatory sentiment, but it crumbles upon even superficial consideration. Here, it’s empirically untrue: the Chinese workers alongside Fuyao’s American employees work harder, for longer hours — they’re often at the factory working on evenings, weekends, and holidays, and do so for less pay and fewer benefits. This may not make them better people, but it absolutely makes them better employees and thus better economic prospects for firms. Even they, though, have limits, and machines are more efficient and productive.

The Obamas may have intended to make a film about workplace culture clashes. However, as it turns out, American Factory is at its core a damning snapshot of American labor entitlement. In an era where painful truths about the declining relevance of blue-collar work and the potential of automation are becoming evident in many fields, it will undoubtedly remain instructive over time. The events depicted are not a fleeting glimpse of a changing past, but an indication and warning of a rapidly oncoming future.

ABOUT Peter C. Earle
Peter C. Earle is an economist and writer who joined AIER in 2018 and prior to that spent over 20 years as a trader and analyst in global financial markets on Wall Street. His research focuses on financial markets, monetary issues, and economic history. He has been quoted in the Wall Street Journal, Reuters, NPR, and in numerous other publications. Pete holds an MA in Applied Economics from American University, an MBA (Finance), and a BS in Engineering from the United States Military Academy at West Point. Follow him on Twitter.