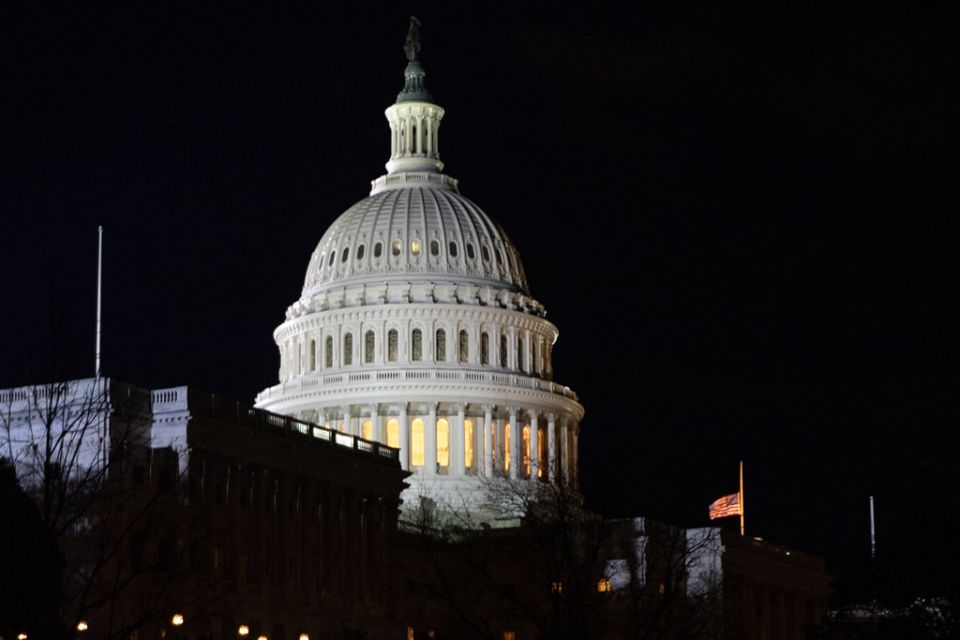 Economics 101 teaches us that whenever government policy mandates that a price be paid above the uncoerced, market-clearing (equilibrium) level, the result is a surplus. The labor market is no exception.  A mandatory minimum wage rate, to the extent it’s set above the market-clearing wage rate, causes unemployment. Studies show that the relevant wage rate must be adjusted for inflation and for the productivity of the pertinent class of labor.

In short, would-be employers will hire would-be employees only to the extent the pay rate corresponds to the real output rate; compelled to pay more than that “just doesn’t pay.”

That’s the economics of it. More important, however, is the morality of it. When government intervenes in wage bargaining and mandates some politically preferred result, it doubles down on its wrongdoing, by violating the liberty not only of would-be wage receivers but also of would-be wage payers.  Almost no one ever admits that employers, too, have rights. They’re not obligated, morally, to provide anyone with a “living wage” unrelated to their job performance. Since they’re not morally obligated, they also shouldn’t be legally obligated.

What right have any politicians to intervene in voluntary wage bargains? None that has ever been proven by reason. It’s mostly and merely (and emotionally) asserted, as if it’s a law of nature. Some claim a mandatory minimum wage bespeaks compassion and justice. In fact, it’s unjust to inflict force on bargainers. Besides, how can Person A claim to be acting “virtuously” by the sheer act of compelling Person B to pay person C more than they’re worth? It makes no sense, viewed morally (or any other way).  Only when wage bargaining is completely free do we observe full and productive employment, satisfied negotiators, and rising living standards.

Justice demands no politically mandated prices whatsoever, including mandated labor prices (wage rates).  Of course, politicians now mostly quibble about the level at which a minimum wage should be mandated; they blithely assume a right to coerce on so intimate a matter as one’s employment; in justice, they should debate how best (and fast) to abolish the mandate.

Since the moral is the practical, we should expect immoral methods to be impractical – i.e., to fail in their (purported) intent.  As argued, mandated minimum wage rates are an unjust, immoral means of “helping” would-be employees. Now, some empirics. The U.S. federal mandate is $7.25/hour, having been raised 41% in three steps just before and during the Great Recession of 2007-09. That result was no coincidence.  This week the U.S. Congress voted again to increase the mandated rate, this time by 106%, to $15/hour.  Hopefully, the bill goes nowhere from here, but such rates have been mandated already at various state levels.

Why $15/hour? It’s a wholly arbitrary number, plucked out of the air by the minimum wage warriors, with no referent in the facts of reality (or morality).  Why not propose $150/hour? Why not $1500/hour?  Perhaps today’s wage warriors aren’t sufficiently compassionate.  Or perhaps they vaguely recall that part of Economics 101 having to do with the deleterious unemployment effects of above-market wage rates.  If so, they must know the principle is no less true at $15/hour than at $150/hour or $1500/hour. It seems debate over the minimum wage has little to do with proponents’ virtue and much to do with fake “virtue signaling.” 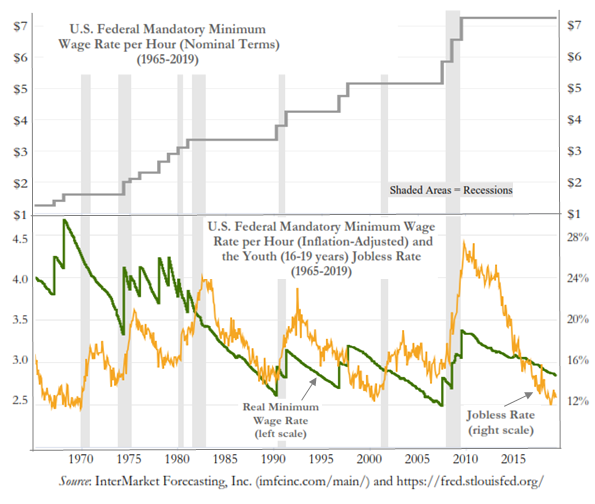 Notice that the teen jobless rate declines materially when the real mandated wage rate does so (due to inflation).  Then Congress raises the statutory minimum and joblessness skyrockets. Recession usually follows. This is the “compassionate” U.S. Congress periodically “helping” U.S. teens by preventing them from reaching the first rung on the labor-market ladder, by ensuring that their skills remain underdeveloped, by promoting idleness and lives of crime, and by delaying the day when such misspent youth might eventually earn a living wage. Some Congressmen eagerly and proudly cite the diminishing real wage as an alleged justification for again boosting the nominal, statutory rate; they’re quite pleased about the harm they inflict.

Most minimum wage warriors acknowledge that merely because politicians mandate certain minimum wage rates doesn’t mean that would-be employers will pay them. If left free, profit maximizing firms will respond to minimum wage rate mandates by firing over-priced laborers in their current employ, by refusing to hire additional over-priced laborers, and/or by adopting a greater degree of automation.  If the aim of the minimum wage warriors is to have would-be laborers earning higher pay, in fact, it seems they fail utterly in their aim.  So why do they endorse the destructive scheme? Perhaps they have other aims. Their next move might be to simply force firms to employ people at above-market rates.  That sounds morally horrific (and fascistic, to boot), but in principle it’s no different than mandating wage rates.