Is a proposed federal wealth tax on the ultra-rich the solution to America’s budget-deficit woes?

Why pursue such an aggressive tax policy against the rich if its realistic revenue yields are minimal? Sadly, the answer appears to be an ideologically motivated attack on wealth for its own sake — an attempt to subject it to extreme and punitive taxation, irrespective of the effectiveness of the proposed policy instrument.

Is a proposed federal wealth tax on the ultra-rich the solution to America’s budget-deficit woes? That’s the claim being advanced by Berkeley economists Emmanuel Saez and Gabriel Zucman, who contend that a wealth tax of 2 percent on individual net worth above $50 million would raise $187 billion a year in new tax revenue. This wildly optimistic projection is also almost certainly without basis in economic reality.

The Saez-Zucman estimate comes from their own estimates of spiraling wealth concentration in the United States, which conflict with several alternative measures of the same. Simply put, Saez and Zucman contend that the concentration of wealth among the top 1 percent is more than twice the level shown by other measures of net worth at the top of the American economic ladder. In their minds, the larger concentration of wealth at the top means a greater pool of assets to tax. Their remarkable revenue projections directly follow from these numbers.

But what if the actual concentration of wealth is much lower than Saez and Zucman claim? Revenue from said tax would fall far short of the projection, calling into question a primary claimed benefit of advancing such an administratively cumbersome measure. This was the contention of economist Lawrence H. Summers and legal scholar Natasha Sarin, who are both personally sympathetic to taxing the rich but also argued in the Washington Post that the Saez-Zucman wealth tax would yield less than half of its promised revenue.

Saez and Zucman published a vigorous rejoinder to Summers and Sarin, asserting the accuracy of their numbers. They are far from neutral parties to arbitrate the dispute. Both economists are serving in advisory roles to the presidential campaign of Elizabeth Warren, a prominent champion of the wealth tax, and Zucman is the cofounder of a new initiative that seeks to politicize the economics profession around progressive-leaning activist causes. But at an even more fundamental level, the critics are correct. Saez and Zucman’s wealth-concentration stats are wildly exaggerated, leading them to severely overestimate the available revenue from taxing the same.

As mentioned, Saez and Zucman’s wealth-concentration statistics come from their own estimates, most notably a 2016 article that attempts to calculate the share of wealth held by top income percentiles in the United States over time. The Saez-Zucman series, as well as their own subsequent derivative work, uses IRS income tax filings to show a rapid increase in the concentration of wealth among the top 1 percent since the mid-1980s. Yet as previously noted, their sharp depicted spike in inequality is not at all apparent in other metrics, which tend to show a much more subdued rise in wealth concentration.

While commentators who are sympathetic to wealth taxation cite the Saez-Zucman statistics to justify their position, their series is actually an outlier. It depicts a pattern that is not seen in any other measure of wealth concentration.

The difference between Saez and Zucman’s estimate and the rest may be seen in the figure below, which compares their IRS-derived series (blue until 1985 and grey from 1986 to the present) against the Federal Reserve’s new Distributional Financial Accounts (DFA) series, an independent survey measure that is linked to U.S. national accounts. Saez and Zucman show a sharp rise of almost 17 percentage points since 1986, matching levels unseen since the Great Depression.

By contrast, the Fed’s series, which begins in 1989, shows a modest rise of less than half of Saez-Zucman, and indeed it currently sits at levels that were historically normal in the 1950s and ’60s. 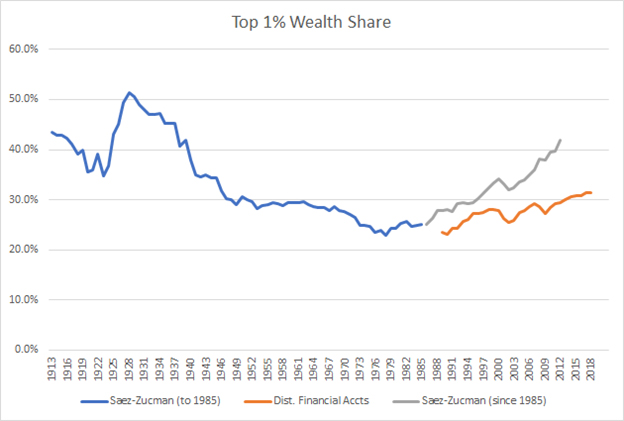 The year 1986 is crucial to the divergence in the two series, as it marks the Tax Reform Act of 1986 — a comprehensive overhaul of the federal tax code that simultaneously lowered top marginal rates and closed hundreds of previously available loopholes that wealthy earners used as tax shelters. TRA86, as the measure is known, triggered the widely observed phenomenon of income shifting, where tax planners legally structure their income streams to take advantage of the difference between two or more tax rates (e.g., differences between the personal income, capital gains, and corporate income tax rates).

Income shifting is an acknowledged effect of TRA86 among economists on both the left and the right, with evidence mounting that it limits the reliability of underlying IRS statistics either before or after the break. The resulting statistical distortion likely throws off the accuracy of IRS records for measuring personal income concentration in this period. Since Saez and Zucman’s wealth series is extrapolated from the same IRS records via income capitalization, they too may unintentionally capture the effects of this distortion.

The Fed’s DFA series is only the latest of many alternative measures that indicate Saez and Zucman’s numbers are off, especially in the last 30 years. Economist Wojciech Kopczuk summarizes the strengths and weaknesses of the alternative approaches in a 2014 article on the subject. The first alternative measure uses estate tax records to estimate top wealth shares for the general population, based on mortality statistics. It shows a much flatter pattern since 1986. The second is the Fed’s triennial Survey of Consumer Finances (SCF), which is also one of the two main components of the new DFA series. It also shows a much more modest rise in wealth concentration in the same period — a distinction that is retained after adjustments are made to reconcile its findings with the IRS numbers preferred by the two Berkeley economists.

Saez and Zucman have aggressively defended the accuracy of their estimates despite their sharp divergence from alternative metrics that do not rely on income tax data. They contend that the estate tax and SCF measures miss various forms of wealth at the extreme upper end of the distribution (to my knowledge, they have not accounted for the new DFA series as of this writing).

Part of the issue comes from how the SCF is sampled. Since well-known wealthy individuals (think of Jeff Bezos or Bill Gates) could be personally identified from their tax returns, resulting in a violation of their financial privacy, the Fed intentionally excludes these ultra-rich earners from its survey samples of net worth. To compensate for this exclusion, they then intentionally over-sample other ultra-rich earners that fall just outside of the cutoff threshold for privacy protection. The adjustment gives a reliable measure of the extreme upper tail of the wealth distribution, and has generally performed better than estimates from IRS-derived administrative data.

Measuring Wealth With the Forbes 400

Saez and Zucman dispute the effectiveness of this practice, contending that it still omits a small number of extremely wealthy fortunes that would appear on the tax rolls under their proposal. They accordingly propose augmenting survey instruments such as the SCF with published data on top fortunes from the Forbes 400 list of wealthiest Americans, and contend that this addition would validate their own much higher estimates of wealth concentration.

Adding in the Forbes 400 list, however, introduces a multitude of other problems that Saez and Zucman do not adequately address. First, doing so would inevitably result in the double-counting of some ultra-rich fortunes. Due to differences in their measured units (the Forbes list tracks individuals and the SCF surveys family wealth), several families that meet the Forbes 400 list’s wealth threshold already appear in the SCF sample. For example, the 2010 iteration of the SCF identified at least 10 such families that would be double-counted if the Saez-Zucman approach of adding the Forbes 400 list on top of the survey’s findings was adopted.

Second, and even more problematic for the Saez-Zucman approach, the Forbes 400 list is plagued by inaccuracies that, historically, have tended to severely inflate the actual value of the fortunes that make the cut.

Accurately measuring extremely high fortunes on the Forbes list is a difficult task, as it requires assigning a value to asset holdings that are not readily liquid or easily given a dollar amount. Consider the uncertainties that accompany real estate valuation on high-end properties, or the inevitable effects on the market price of Facebook stock if Mark Zuckerberg suddenly decided to convert all of his holdings into cash via sell-off.

As an added complication, many members of the Forbes 400 list treat their ranking as a status symbol. They try to game the rankings in their favor by overstating the value of their fortunes. Almost three decades ago, this status-seeking exaggeration was dubbed as the “Donald Trump problem” due to a certain billionaire’s habit of pressuring Forbes to revise the value of his real estate holdings upward, thereby increasing his own ranking.

To test the accuracy issues with the Forbes 400 list, a team of economists from the IRS’s Statistics of Income division put its valuations of top fortunes under a microscope. Going back to the list’s origins in the early 1980s, they were able to identify 376 records of deceased former Forbes 400 members out of 1,378 total list members during this time span. One hundred eighty-one of these members were still on the Forbes 400 list at the time of their death. This subset allowed the IRS economists to compare the reported fortunes of the deceased members from Forbes against the actual valuation of their estates at the time of their death. The results suggest that the Forbes list vastly overstates the value of its members’ fortunes.

The Forbes 400 list, it would appear, systematically over-values the fortunes of the ultra-rich on average — and often substantially when compared to their actual estates. Saez and Zucman’s use of it accordingly introduces far more upward distortions to the overall measurement of wealth than it resolves.

These findings leave the Saez-Zucman wealth-tax revenue estimates on a precarious footing. In order to reach the projected $187 billion revenue yield, one must accept the validity of Saez and Zucman’s own estimates of top wealth concentrations. Yet as we have seen, those estimates depend upon a succession of unsupported assumptions about the amount of available wealth to subject to their proposed tax, and a discounting of other independent measures that cast substantial doubt upon their claims.

If any one of those assumptions is mistaken, the wealth tax will severely underperform the Saez-Zucman revenue projections. And that does not even address further complications that will almost certainly accompany tax enforcement, including additional expected income and asset shifting in response to the new measure’s implementation.

There are additional reasons to be skeptical of the wealth-tax proposal. It would likely carry contractionary implications for the U.S. economy, and risk triggering an exodus of wealthy individuals from the United States (as happened in France during its own wealth-tax experiment from 2000 to 2012). Several European experiments with similar policies in recent decades have yielded underwhelming levels of revenue, a multitude of enforcement problems, and a general trend toward abandoning the scheme. In the case of the United States, a wealth tax is also likely unconstitutional and would require an amendment and a drawn-out court challenge to even become law.

But even considered in the abstract as a revenue-raising device, the Saez-Zucman projections are implausibly high. And that raises the obvious question: why pursue such an aggressive tax policy against the rich if its realistic revenue yields are minimal? Sadly, the answer appears to be an ideologically motivated attack on wealth for its own sake — an attempt to subject it to extreme and punitive taxation, irrespective of the effectiveness of the proposed policy instrument.

Share
Phillip W. Magness
Phil Magness is a Senior Research Fellow at the American Institute for Economic Research. He is the author of numerous works on economic history, taxation, economic inequality, the history of slavery, and education policy in the United States.