The 1215 Magna Carta limited the power of central government and it forced a reigning monarch to grant his English subjects rights. It laid the foundations for limited constitutional governments, an idea offensive to most leftists. 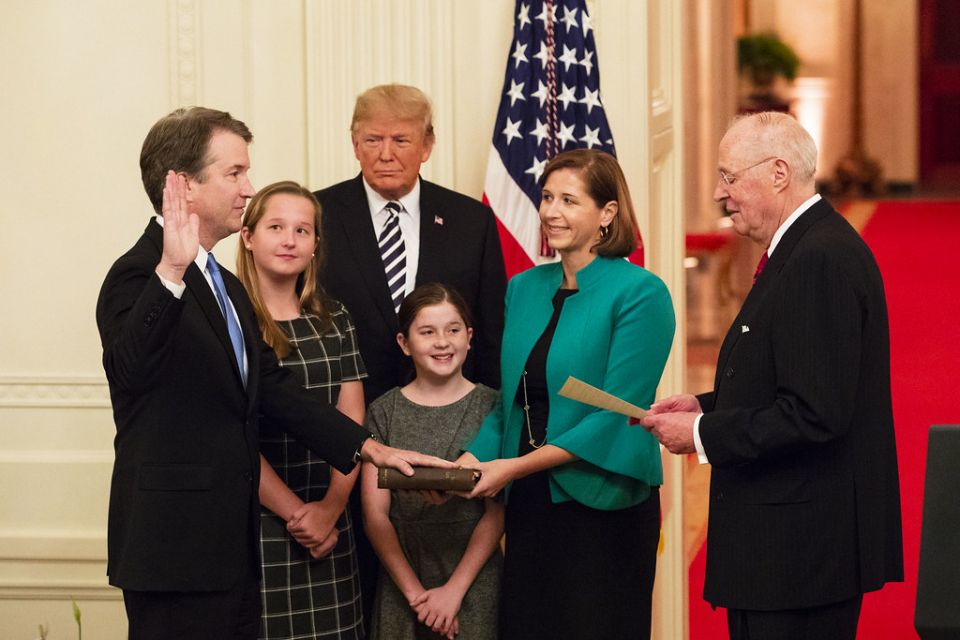 George Mason University’s Antonin Scalia Law School hired Supreme Court Associate Justice Brett Kavanaugh to co-teach a course this summer called Creation of the Constitution. The course will be held 3,668 miles away, in Runnymede, England, where the Magna Carta was sealed 800 years ago.

Some George Mason University students and faculty have become triggered.

One student told George Mason’s Board of Visitors, “It has affected my mental health knowing that an abuser will be part of our faculty.” Another said, “The hiring of Kavanaugh threatens the mental well-being of all survivors on this campus.” The Washington Post reports that a petition to fire Kavanaugh has gathered almost 3,500 signatures and has the endorsement of George Mason Democrats. GMU students have created separate forms for parents and alumni to pledge that they will not donate to the university so long as Kavanaugh is teaching.

Part of student demonstrations included defacing a statue of the university’s namesake George Mason by putting blue tape on his mouth and attaching anti-Kavanaugh signs. The university’s spokesman Michael Sandler gave The College Fix a mealy-mouthed excuse saying, “We allow students to dress up the statue, so this doesn’t violate any policies that I’m aware of.” He said the university “strongly supports freedom of expression and this would seem to fall into that category.” His vision suggests that freedom of expression includes defacing university property.

Youngsters with little understanding might be forgiven for their protest of a U.S. Supreme Court associate justice sharing his wisdom with law students. But faculty members cannot be excused.

Professor Bethany Letiecq, the head of the George Mason chapter of the American Association of University Professors, endorsed a call by UnKoch My Campus, another leftist group, for a congressional investigation of GMU’s law school’s hiring of Justice Kavanaugh as an adjunct faculty member. Fortunately for civility, Dr. Angel Cabrera, the university’s president, said that there were no legitimate grounds for an investigation by the university. He threw a bit of pablum to the protesters by saying: “I respect the views of people who disagreed with Justice Kavanaugh’s Senate confirmation due to questions raised about his sexual conduct in high school. But he was confirmed and is now a sitting Justice.” Considering that a college president is also a politician, that statement demonstrates good judgment. According to The College Fix, after listening to the student protestors speak during the board meeting, Cabrera and Board of Visitors rector Tom Davis said they were proud of the students and appreciated that they spoke up and acted as engaged citizens. That’s nonsense.

I receive many questions from people around the nation who are surprised by the happenings at GMU. As I have advised on numerous occasions, George Mason University erroneously earns a reputation as a conservative/libertarian university because of its most distinguished and internationally known liberty-oriented economics department, which can boast of two homegrown Nobel laureates in economics. Its Antonin Scalia Law School has a distinguished faculty that believes in personal liberty and reveres the U.S. Constitution — unlike many other law schools that hold liberty and our Constitution in contempt. The rest of the university is just like most other universities – liberal, Democratic Party-dominated. The chief difference between my GMU colleagues and liberals at some other universities is that they are polite, respectful and congenial, unlike what one might find at places like U.C. Berkeley or University of Massachusetts.

GMU students and faculty may also be disturbed about what Justice Kavanaugh is going to teach. In the course, Creation of the Constitution, he will explain how much the Magna Carta influenced the founders of our nation. The 1215 Magna Carta limited the power of central government and it forced a reigning monarch to grant his English subjects rights. It contained a list of 63 clauses drawn up to limit King John’s power, resulting in making royal authority subject to the law instead of reigning above it. It laid the foundations for limited constitutional governments, an idea offensive to most leftists.