Solo sags a bit. The Lando Calrissian character, created by George Lucas and originally played by the underestimated Billy Dee Williams, slows the movie down, as he’s bogged down by a sassy, pointless droid that adds nothing. But it turns out that what’s wrong with Solo, billed by Disney’s Lucasfilm division as a “Star Wars story”, doesn’t ruin an otherwise enjoyable and entertaining B movie directed by Ron Howard. 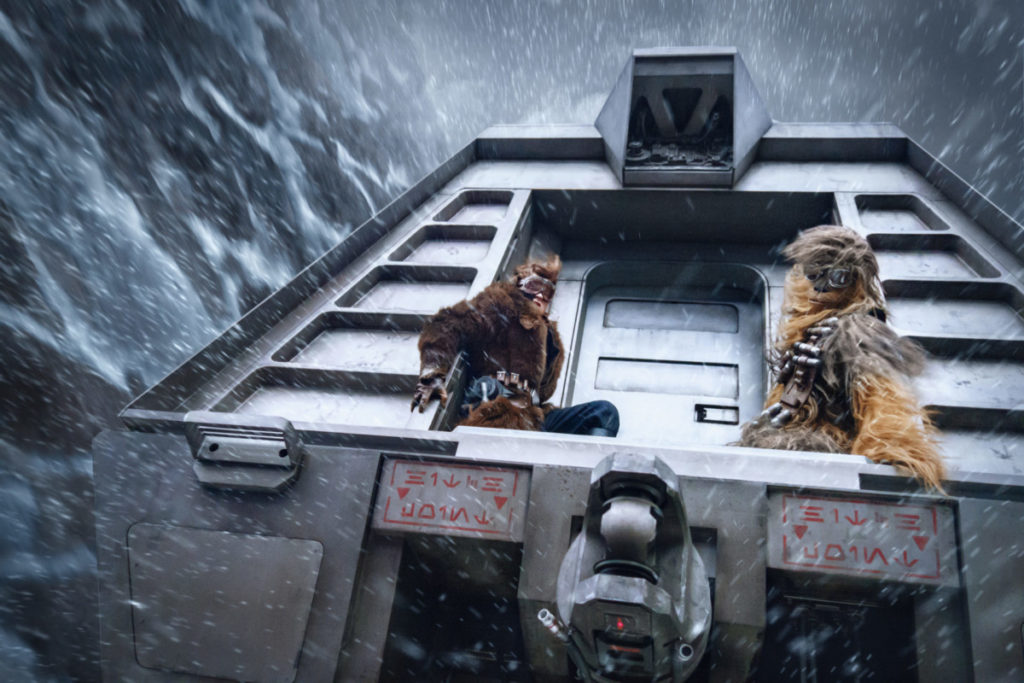 Mr. Howard deserves credit for this movie, which is written by Lawrence and Jonathan Kasdan. He’s the third director, after Lucasfilm boss Kathleen Kennedy fired the first two directors. He’s following numerous Star Wars pictures since 1977, most of which are middling or worse and the last one, The Last Jedi, is a mess. Factor, too, that Solo is a prequel and a spinoff from the main story and it’s facing the most anti-intellectual audience in recent history. Directing a coherent movie which is one part of a popular series in today’s vacant and quickly triggered pop-mob cult is not easy. 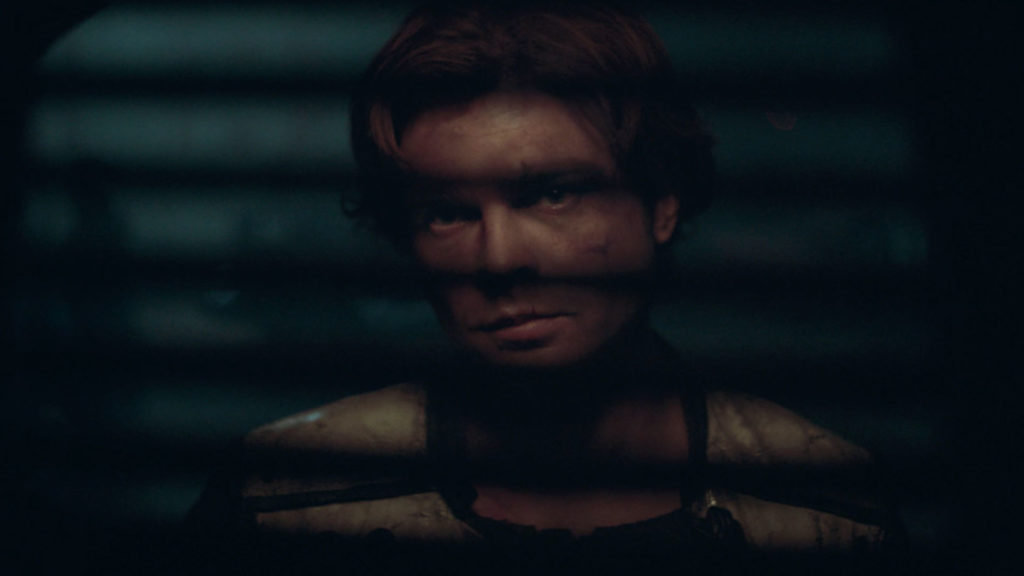 Yet Ron Howard, whose best work includes Cinderella Man and Frost/Nixon, succeeds with vitality, tact and restraint. Recalling classic B or better movies — Where Eagles Dare, The Dirty Dozen and, briefly, The Defiant Ones come to mind — even, for a flash, the brilliant Casablanca, Solo, like the character, is at its best a throwback to classic non-conformist-themed movies.

The movie which Solo most evokes in sum total is one in which Mr. Howard gives his best acting performance as an innocent seeking to know: The Shootist, a small, character-driven picture starring John Wayne in his final film. Like that measured and thought-provoking 1976 movie, Solo compiles its subplots as layered lessons in what makes a man. In Solo, the innocent idealist is Han Solo, the scoundrel first depicted in the original classic Star Wars, sadly later renamed A New Hope.

Played with deft awareness of the demands of the role by plucky, handsome Alden Ehrenreich, younger Han is fittingly faster on the draw and, as he schemes, his smile and rubbery face conceal more than they reveal. Han’s grin is his mask. This is the only way to play the smuggler in his origins if later episodes were to make sense. Thanks to a young, relatively unknown cast, Han’s trajectory as a scheming pilot, friend and lover comes through. 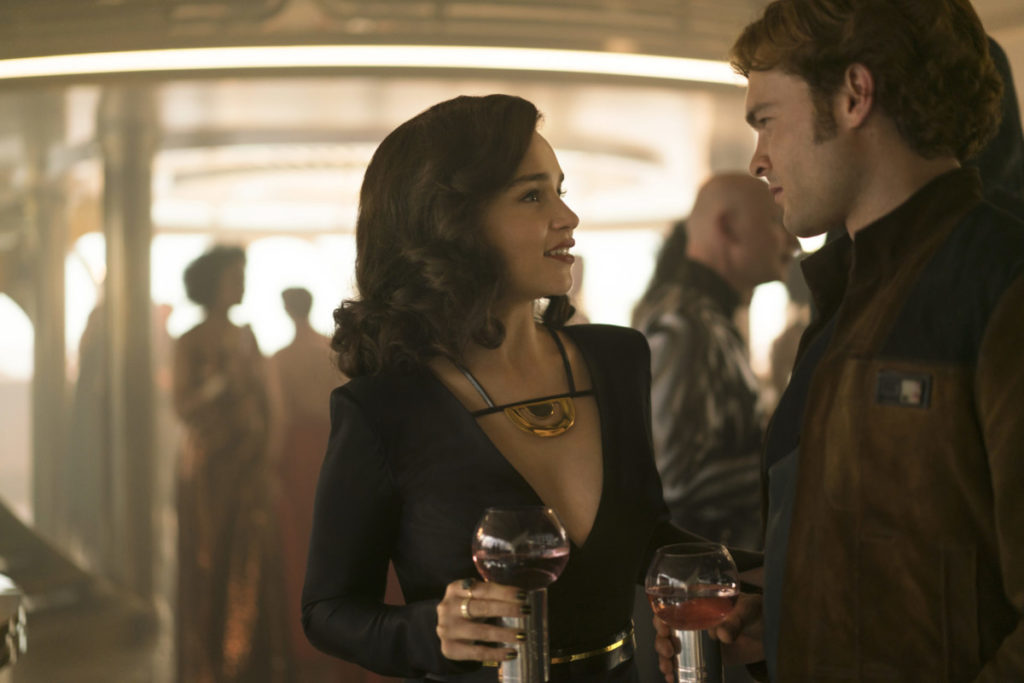 Solo starts with the leading character in an oppressive slave state, plotting escape with his girlfriend, perfectly played by an actress named Emilia Clarke, who is thankfully not another female “bad ass”. Her character dramatizes the pain of being locked down in a surveillance-security state in which lockdown is the norm (U.S.A., U.S.A). Clarke is excellent in the part. She’s everywoman being scanned and scrutinized by an outrageous TSA-type apparatus on the slave planet where she resides.

This is not to say that pacing, editing and momentum don’t show room for improvement, especially in the picture’s first half, as her character, Qi’ra (pronounced Kira), and Han, are too matter-of-fact when going gets tough. The galaxy’s lawlessness breeds its action, as three years pass and the title character meets another scoundrel (Woody Harrelson), his world-weary partner (Thandie Newton) and their hacker-type alien (nicely voiced by Jon Favreau). The aim to steal some powerful substance and get the girl, more or less, is complicated by a smoothie played by Paul Bettany. The ominous threat of fascism via various figures from the oncoming Empire comes in small waves. If you’ve read this far, you know what to look for. As pictured, sidekick Chewbacca makes an entrance and an impression, too. 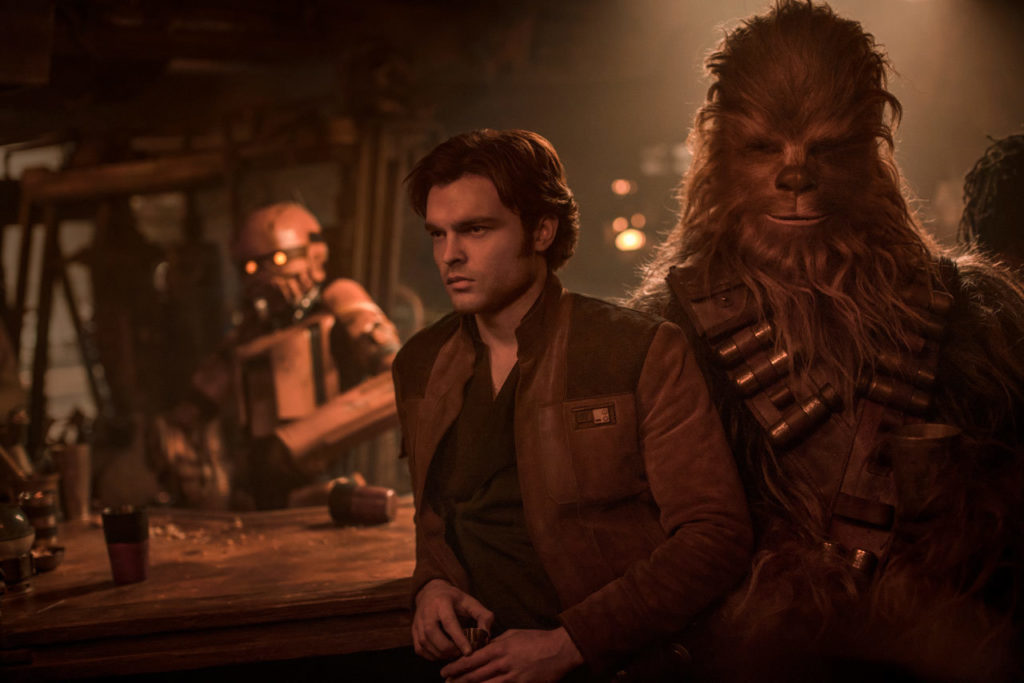 Solo stays on track, offering freshness and surprise, mostly in what it doesn’t unload on the audience, with value added by John Powell’s musical score which enhances major pulse points.

The forementioned Calrissian character (Donald Glover) is a disappointment, especially after seeing Williams shine in the role. He’s a dandy, which is consistent, but without sufficient reason to be and with the indignity of being paired with an inexplicably snappy droid that demands “equal rights”. The droid, known as L3, is extremely annoying. Though quieted in recent films, the effeminate, quasi-gay droid C3PO at least acted with intention as a protocol machine; L3 plays like Florence the sassy maid on The Jeffersons without reason to be brash, so she’s simply an irritant. 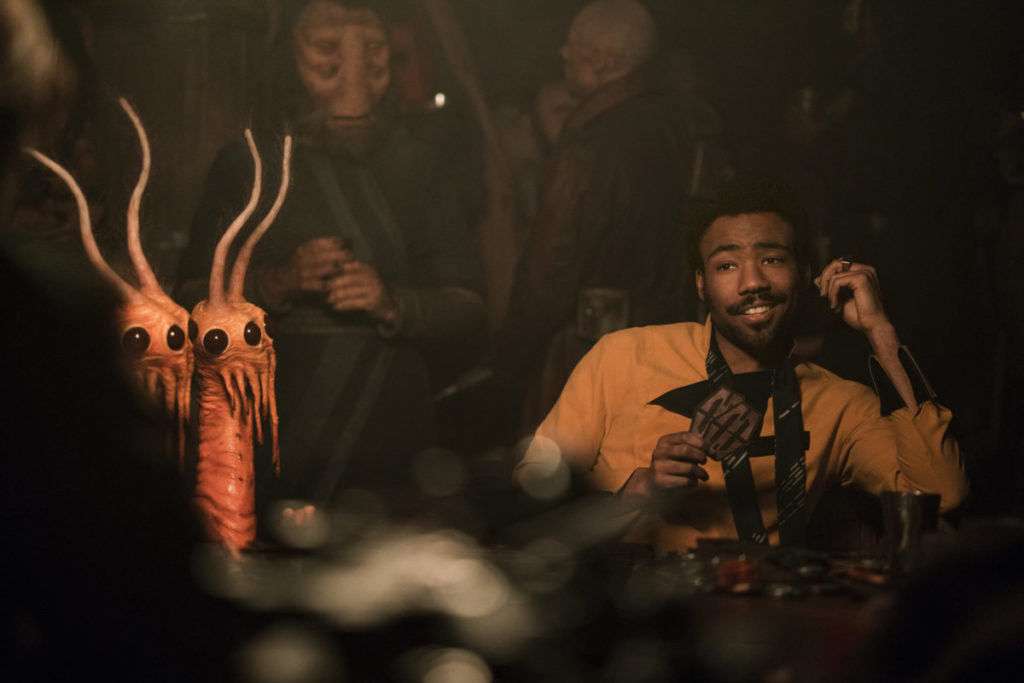 Solo offers more to enjoy than not as a classic Star Wars movie, however. Origins, twists and scenes play out, for a remarkable change in today’s mindless action movies, making this ‘Star Wars story’ a pleasing diversion worth seeing. The main plot line aligns with Han Solo better than one might expect and this results from Ron Howard’s emphasis on storytelling over effects and politically correct propaganda plugs. It’s not perfect, but at least it’s about Han Solo and why he chooses who he becomes, with room for pre-exposition, without stripping him of masculinity, which someone, somewhere in a galaxy close, close to home will undoubtedly dub “toxic”.

Solo‘s gunslinging, smuggling and romancing get the picture alright.