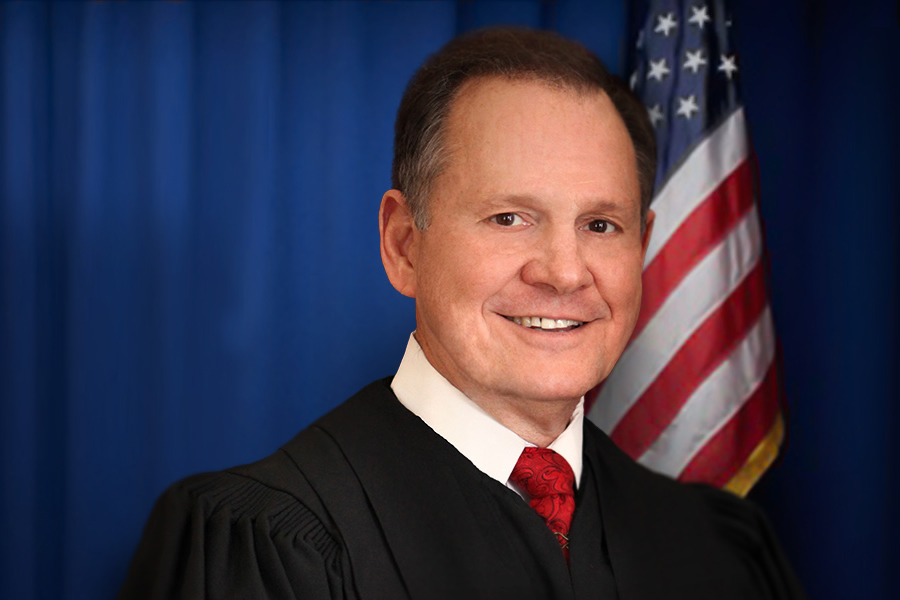 Roy Moore, the Republican candidate for the United States Senate from Alabama, may be elected this year to the U.S. Congress. This is an alarming prospect for many reasons. Recent claims reported by the Washington Post are the weakest reasons to reject Moore’s candidacy and I fear that the Post, in pursuing the apparently well-researched story in the wake of recently lowered journalistic standards by the New York Times and the New Yorker — hit pieces which launched a wave of articles about unconfirmed sex claims and unsubstantiated allegations, leading to a purge of powerful men — diverts attention from Moore’s worst ideas. But that’s another topic.

Moore is the judge who was essentially removed from Alabama’s State Supreme Court twice when he violated American law; in 2003 when he refused to remove a statue of the Ten Commandments from the courthouse and earlier this year when Moore urged judges to defy federal orders regarding same-sex marriage, which Roy Moore has stated he regards as worse than slavery.

Moore has also asserted in 2005 that homosexuality should be against the law.

As founder and president of the Foundation for Moral Law, a religious charity from which he arranged to collect $1 million in payments from 2007 through 2012, the religious fundamentalist nicknamed the “Ayatollah of Alabama” actively seeks to impose religion in government. Moore, who once won a kickboxing championship, went to work in Australia on a cattle ranch and graduated from the United States Military Academy at West Point, admitted in his autobiography that he was so reviled by his fellow U.S. soldiers during the Vietnam War that he slept on sandbags to avoid having explosives tossed under his cot.

Like President Trump, who has endorsed the former judge, Moore was a lifelong Democrat until he switched parties and became a Republican.

Unlike the president, however, the Alabama native is a religionist who consistently advocates mixing government and religion. When Moore installed a Ten Commandments plaque behind his judicial bench, he did so on the grounds that, as he later told The Atlantic, he wanted to establish his religion, Christianity, as the moral foundation of U.S. law. Then-Judge Moore also began court sessions with a prayer. Moore’s illegal actions lead to a lawsuit filed by the American Civil Liberties Union (ACLU) challenging Moore’s courtroom prayer and Ten Commandments display as unconstitutional.

When Moore later unveiled a monument to the Ten Commandments, he praised: “…God upon whom this nation and our laws were founded”, which is totally false. A lawsuit was filed in the United States District Court asking that the monument be removed because it “sends a message to all who enter the State Judicial Building that the government encourages and endorses the practice of religion in general and Judeo-Christianity in particular”. But Moore, who was ultimately removed from the judiciary, refused to remove the Ten Commandments monument.

“If all Chief Justice Moore had done were to emphasize the Ten Commandments’ historical and educational importance… or their importance as a model code for good citizenship … this court would have a much different case before it. But the Chief Justice did not limit himself to this; he went far, far beyond. He installed a two-and-a-half ton monument in the most prominent place in a government building, managed with dollars from all state taxpayers, with the specific purpose and effect of establishing a permanent recognition of the ‘sovereignty of God,’ the Judeo-Christian God, over all citizens in this country, regardless of each taxpaying citizen’s individual personal beliefs or lack thereof. To this, the Establishment Clause says no.”

The judge’s correct ruling, serious flaws aside, merely inflamed the wrath of Roy Moore’s faith and, this summer, Moore suggested that the September 11, 2001 attack by Islamic terrorists was God’s punishment for Americans losing faith, though he’s also blamed sodomy and abortion for Americans’ suffering. Roy Moore reserves a particular disdain for homosexuality, which he regards as an evil which should be illegal. “Homosexual behavior is … a crime against nature, an inherent evil, and an act so heinous that it defies one’s ability to describe it.” When asked in 2015 whether he believes that sex between persons of the same sex should be punished by death, Roy Moore declined to provide an explicit answer, equivocating with: “Well I don’t, you know, I’m not here to outline any punishments for sodomy.”

Any serious candidate who would leave doubt as to whether he seeks to enact laws to put adults to death for having consensual sex is a monster deserving total and absolute scorn and the most emphatic denunciation from statesmen, intellectuals and every moral American. Insinuating that he thinks gays deserve to die and stating clearly and explicitly that he aims to enact a religious government disqualify Moore from political office. Whatever moral transgressions he’s made in his sexual past, including his alleged assault and proclivity for sex with children, Roy Moore’s election to the Senate on December 12, 2017, would mark a black day in U.S. history. If Moore wins, his election will be a victory for religious statism and another chilling step toward dictatorship.