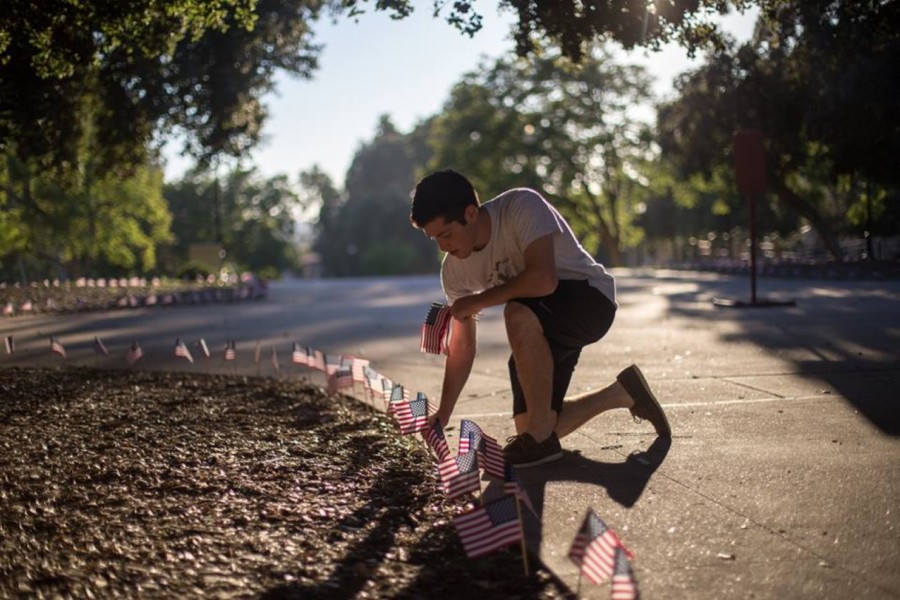 On the 15th anniversary of the worst domestic terrorist attack in history—September 11—a college student’s memorial flag display was destroyed three times. The attack at Occidental College, widely reported by CNN, Fox News and the Washington Post, has reportedly been under investigation by the private Los Angeles college, known for humanities and past students such as Ben Affleck, Jack Kemp and Barack Obama.

According to a recent statement, Occidental College knows who attacked the exercise of free speech. Citing privacy law, however, the school refuses to disclose details.

“The college’s investigation of the reported vandalism of a 9/11 memorial on campus has concluded,” the statement said. “Students believed to have been involved in the incident were identified, and the college has taken appropriate action in accordance with the college’s Code of Student Conduct.”
The student who organized the 9/11 memorial said he has mixed thoughts about Occidental’s statement.

“I had heard that students were being investigated,” said sophomore Alan Bliss, 20, who coordinated the 9/11 flag assembly through the campus club Conservatives of Occidental College. “But I [still] don’t know whether students admitted wrongdoing or if they’re being disciplined.”
The college pledged to have what it calls a “teachable moment” this spring, using a phrase made famous by former Occidental student Barack Obama early in his presidency.

Occidental’s plans include an address by a scholar who regards free speech as limited, not absolute, and a discussion of free speech on college campuses.

Additionally, Occidental College says it will stage a play which officials describe as challenging “preconceived notions about issues such as race, class and the law” and host a film series to “expose students to a variety of perspectives on 9/11”. Occidental announced that it will also screen a documentary about choosing “reconciliation rather than vengeance” in the wake of the 9/11 Islamic terrorist attack on the United States.

When asked about Occidental’s response, Bliss said he would continue to speak out with what he regards as support from the administration. “I’d like to be able to trust the college, so I want to see if Oxy follows through on creating a discourse on free speech,” he said.

Occidental officials had pre-approved his free speech exercise, Bliss said, which he displayed in the hours leading up to Sept. 11. The conservatives’ club invited everyone at Occidental to take part in putting 2,997 small U.S. flags into the ground to commemorate the same number of mass murder victims on 9/11.

Bliss, who says he’s majoring in economics and math, admits that his political views don’t align with most students at Occidental. “My conservative beliefs make me somewhat of an outlier,” he said. “But I don’t choose to be conservative because I think it’s cool or to go against the flow.”

Indeed, the student’s awareness of his divergent views caused him to soften the 9/11 display, which he stripped of political adornment, choosing not to include paraphernalia opposing radical Islam.

At first, he said, the flags appeared to unite students.

“We had people [volunteering] who were walking by or going to the library,” Bliss said. “People of all backgrounds helped — women, men, black, white, Asian, Latino. We probably had more liberals and Democrats than conservatives and Republicans planting flags.”
Bliss said the act of destruction—like the 9/11 attack—came in waves.

The first use of force occurred around midnight on Sept. 11, he said. Bliss said he received a text message asking what had happened to the flags on display.

He sprinted to the quad, where he saw that the display had been wrecked. Every flag had been stuffed into three garbage cans. Bliss and volunteers immediately notified campus security and began re-planting the flags.

Some students confronted them, asking, “Do you know what it’s like for us to see American flags?” Bliss recalled.

Bliss said he promptly informed Occidental officials about the incident and requested assistance. “We wanted to avoid a confrontation,” he said.

He then returned to his dorm to get some sleep. Two students volunteered to guard the display overnight. A short time later, a volunteer reported hearing crunching sounds, which turned out to be the snapping of the wooden posts on the American flags. When volunteers called on the vandals to stop, they ran.

Later, in daylight on Sept. 11, vandals charged at the display a third time, pulling flags out of the ground and riding bicycles over the flags while volunteers struggled to re-plant them. Bliss called and asked again for Occidental campus safety to protect the display.
Again, Bliss said, no one was dispatched and no one was posted.

A call to the college’s campus safety office was referred to a spokesman for Occidental College, who said that records show that campus safety received only one call after midnight “to file a complaint”. When asked why safety officials were not posted to guard the display from further damage and destruction, he said that Occidental “does not have the resources” to both protect a display in the quad and the entire campus.

Bliss said that Occidental officials told him to not call Los Angeles Police.

In the weeks following the incident, he said that his studies and life on campus have been distracted.

“The school’s a little small,” he said. “Word spreads quickly when something happens. I can’t go to a social event without someone approaching me, saying they disagree with my views and hate me for expressing my views. People I don’t know have these pre-conceived notions about me. It’s been hard, especially after this whole media outburst.”

The Dallas, Texas, native said he chose to attend the Eagle Rock college, where conservative 1996 GOP vice-presidential nominee and NFL quarterback Jack Kemp graduated and leftist Democrat President Obama studied for two years.
“Teachers have been supportive,” he said. “I love Oxy as much as when I first came here.”

However, the lack of defense adds to the cumulative effect, Bliss said, indicating that free speech at Occidental is under siege.

Bliss points to campus groups, such as the Coalition at Oxy for Diversity and Equity (CODE), which denounce the memorial and praise the attack. “CODE [explicitly] supports the vandals,” Bliss said. Indeed, on CODE’s Facebook page on Sept. 11, CODE posted that it “supports the students that carried out this action.”

“It’s campus culture,” Bliss observed, citing so-called trigger warnings and safe spaces, which he thinks are toxic to free expression. “It’s dividing us,” he said. “No matter what someone’s saying, they have the right to say it. Freedom of speech means freedom to convey ideas without fear of being attacked or having a display destroyed.”

The president of Occidental College, Jonathan Veitch, who declined an interview request, released a statement about the vandalism on Sept. 13: “This incident has been defended by some as an act of protected speech. It is not. It is an act of defilement that is deeply offensive to the memory of those who died on Sept. 11. And it violates the free speech of others, a principle we must hold dear as members of an educational community.”

Reflecting on the past several weeks, Bliss said that he “absolutely” would do the display again and that the 9/11 memorial matters.

“People approached us saying that they lost family in the terrorist attack,” he recalled of the flag display. “That really put us in a grave mood and [gave us the sense that] this is real. Also, we noticed how long it took to plant 2,997 American flags. When you say 2,997, it’s a number. When you’re actually planting that number of flags, you feel how many lives were lost. That made us [feel] sad and it made everyone feel connected. We left the planting in a serious mood and had a moment of silence afterward.”

For now, Bliss said, he’s giving Occidental College the benefit of the doubt that the school will honor its claim to defend free speech.

“Maybe the administration will realize that Oxy is not providing an ideal environment for fostering communication,” he said. “Maybe they’ll bring in more conservative speakers. There are a variety of things Occidental College can do.”
Meanwhile, Bliss said he now knows first-hand that, on today’s college campus, exercising free speech can trigger an attack.

“My fear — because this was an equitable display — is that if we ever do anything [explicitly] political, [those responsible] might attack in an even grander way,” Bliss said.