Plato: Father of the Totalitarian State

Political-Economic Ideas of The Greeks, Part 2 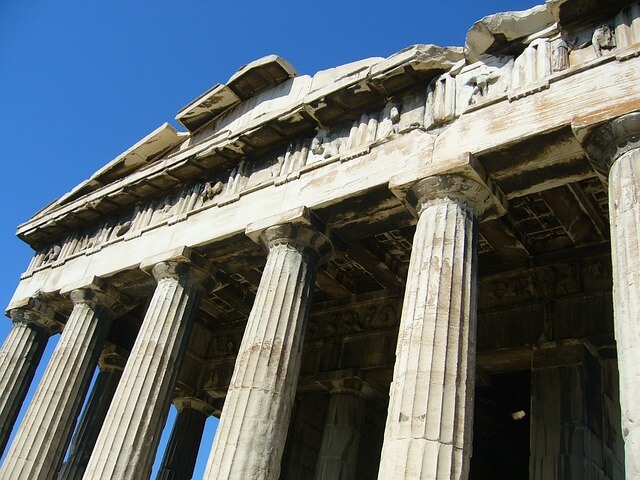 Plato on division of labor and size of the city-state

For Plato (428 B.C. – 348 B.C.), the origin of society is found in the inability of men to be self-sufficient; they lack the ability to serve all their own needs through their own labor.  Each man possesses certain inherent qualities that make him better at some things than at others. By and through specialization of tasks the members of a community can improve their material conditions by producing that commodity at which they are most skilled and trade quantities of it away for the other things that they need from others who are doing the same.

But Plato’s defense of a division of labor is not based only, or primarily, on its productive superiority. Instead, the rationale for such a social arrangement is ethical. Given the diversity of natures and skills among men, Plato argued that each should do what is “natural” for him, and when he does so he is fulfilling that which is “best” in his “nature.” And, thus, he fulfills “the good.”

Man’s primary wants, Plato said, was for food, shelter, and clothing. The city-state must have an internal division of labor large enough to contain a sufficient number of members with the diverse skills and abilities to assure that such basic wants could be satisfied.

But Plato is asked by one of his students, would this not be merely a “city of pigs”?

Plato admits that if the city-state is to satisfy both the necessities of men and the “higher” and more cultured aspects of their potential lives, the city had to expand to a size large enough to include the required population, land, and resources to fulfill their higher and more cultured wants as well.

Other city-states would be in the same situation. Conflicts between city-states would arise as each attempted to expand and take from other city-states what they possessed.  War was inevitable from this. To defend itself from competing city-states and to expand to have the requisite population, land, and resources for this “higher” cultured life, any city-state would need a class of men in the division of labor trained and skilled to protect and conquer territory, resources, and slaves to perform the work to be done.

Plato and the communism of the guardians

The city-state would require a class of “guardians” or “warriors.” But a problem, now, arises, Plato says: What would protect the citizens of the city-state from the guardians who have the capacity to use their warrior skill against those who lives and needs they are supposed to protect? What guards the people against the guardians?

This led Plato to his critique of private property. Where men can own property, Plato declares, there exists the lust for possessiveness and ownership.  Not the “common good” of the city, but the self-interested desires of the individual are motivated when men may acquire and own private property.

For Plato, there exists a hierarchy of values: “The soul,” “the body,” and “wealth” – in that order. A guardian class with the right to own property would be tempted, therefore, to pursue the “lowest” rather than the “highest” of the ends of man – the pursuit of material wealth rather than the quest for “truth” and “virtue.”

Thus, in Plato’s ideal Republic, the guardians would renounce material ownership. The guardians would live together in a common barracks; they would share meals together; their clothes would be modest and similar. Women would be shared in common, and female guardians would have their children taken away shortly after birth to prevent a self-interested bonding with the child.

Plato’s presumption is that if you deny people the ability and the right to acquire and possession private property and wealth, they will stop being concerned with their own personal interests and desires. Instead, they will only concern themselves and have as their goal the betterment of “all” who share in a common or communal property, and community.

In Plato’s mind, therefore, there is no invariant, or never-changing, or constant “human nature.” Change the social institutions and you can change character and quality of the man.

In Plato’s ideal State there are the ruled and the rulers. One of the responsibilities of the guardians would be to assist in selecting the rank and position that each member of society was to hold.

Indeed, every aspect of every individual’s life was to be controlled and directed by the State. At one point, Plato says:

The main principle is that: that nobody, male or female, should be left without control, nor should anyone, whether at work or in play, grow habituated in mind to acting alone and on their own initiative, but he should live always, both in war and peace, with his eyes fixed constantly on his commander and following his lead.

The domestic economy was to be rigidly determined and regulated by the rulers. In Plato’s words:

All trade, commerce, and manufacturing, both within the city-state and with other city-states would be controlled and regulated by the rulers of the State. There would be no free movement of people from city-state to city-state. Such interaction, Plato said, would threaten a mixing of cultures that could seriously undermine “the good polity under right laws.”

Any people sent abroad to inspect the doings of other peoples and to learn what things might be useful to learn for improving one’s own city-state would only be those over 50 years of age and approved to do so by the State authorities. They must be men of “great merit” and “incorruptible” in terms of being detrimentally influenced by what they saw and heard on their foreign travels. Said Plato:

But if, on the other hand, such an inspector appears to be corrupted on his return, in spite of his pretensions of wisdom, he shall be forbidden to associate with anyone, young or old; wherein, if he obeys the magistrates, he shall live as a private person, but if not, he shall be put to death.

Nothing is outside the control of the State. Not one aspect of personal life is to remain a matter of privacy. This included the duty of the rulers to maintain strict population control to assure a “proper” size of the ideal city-state. This would be a population of 5,040 people – large enough to provide the required division of labor for tasks to be perform, yet small enough for everyone to know each other.

In addition, there would be selective breeding to assure a “strong” citizenry. Any over-population would be sent abroad to form colonies, or the newborn would be put to death.

Plato as the father of the totalitarian state

It is for these reasons that Plato has sometimes been called the intellectual father of political and economic collectivism, and the totalitarian State. In Plato can be found the blueprint for the absolute and comprehensive command and planned economy:

Wage and prices are set by the State; the guardians determine the allocation of the population in the system of division of labor by distributing each person to a particular occupation or task for life from an early age; all domestic and international trade and commerce is controlled and regulated by the State, as determined by the “proper needs” of the city-state; and what people may learn and share about other societies is strictly regulated by the State.

The individual is reduced to being a cog in the wheel of Plato’s ideal State.

The famous philosopher of science, Sir Karl Popper, concluded in The Open Society and Its Enemies (1945):

Plato’s vision and “ideal” ended up serving as an inspiration and standard for much of the twentieth century under the name of the Total State in both its communist and fascist forms.

SHARE
Richard M. Ebeling
Dr. Richard M. Ebeling is the recently appointed BB&T Distinguished Professor of Ethics and Free Enterprise Leadership at The Citadel. He was formerly professor of Economics at Northwood University, president of The Foundation for Economic Education (2003–2008), was the Ludwig von Mises Professor of Economics at Hillsdale College (1988–2003) in Hillsdale, Michigan, and served as vice president of academic affairs for The Future of Freedom Foundation (1989–2003).