Bathrooms are among the most private of private property. We don’t need government determining the make-up or use of bathrooms. 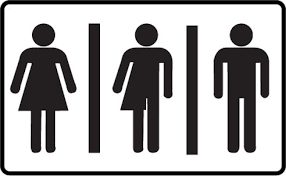 “Bathrooms are among the most private of private property. We don’t need government determining the make-up or use of bathrooms.”

The national debt is $20 trillion and counting. Medicare and Social Security are going bankrupt. ISIS is at our doorstep, the federal government threatens to confiscate guns from peaceful gun owners, and health care is being ruined by socialized medicine. And yet we’re fighting over transgender bathrooms in public schools.

When historians look back on the whole history of the American republic, and contrast it with the early twenty-first century, which may prove its waning years, what will any honest and objective observer think and conclude?

The Obama administration told public school systems across the nation on Friday to allow transgender students to use the bathrooms and locker rooms that match their gender identity. The directive, from the Justice and Education Departments, comes just days after the federal government and North Carolina sued each other over a state law that Gov. Pat McCrory signed in March. That ordinance requires transgender people to use the public bathroom that corresponds to the sex on their birth certificate. It applies to schools and other public accommodations.

“The last time I checked, the United States is not ruled by a king who can bypass Congress and the courts and force school-age boys and girls to share the same bathrooms and locker rooms,” said Phil Berger, the Republican Senate leader in North Carolina.

Actually we are ruled by a king. This is not the first time Obama has used executive orders to bypass legislation or debate. He knows he’s right. He does not care about the needs, wants or concerns of anyone who disagrees. It’s not only on this issue; it’s on Obamacare, guns, immigration, fiscal policy and everything else.

It was left to one U.S. Senator to state the obvious: “This is the kind of issue that parents, schools boards, communities, students and teachers should be allowed to work out in a practical way with a maximum amount of respect for the individual rights of all students,” said Senate Education Committee Chairman Lamar Alexander of Tennessee. “Insofar as the federal government goes, it’s up to Congress to write the law, not the executive departments.

That’s true, so far as it goes. But not with Obama. Obama is the same president who unilaterally turns the Obamacare law on and off, or delays its implementation, to suit his favored companies. He’s the same president who got angry when Congress would not comprehensively change our existing immigration laws, so he unilaterally changed them himself. He’s the same president who talks openly of altering gun laws and even tax rates via executive order. What Obama seeks to do with his self-assigned, unlimited executive power is of great concern; but of even greater concern is the fact that he uses this power, almost without restraint. Where’s the outrage over that?

Obama, like his fellow progressives, are really just dictators. They think they can establish peace, harmony, and justice (as they define it) by imposing their will on people, whether they like it or not. He thinks he can change minds by pointing a gun to their heads, as with transgender bathrooms in rural Texas and Mississippi. Instead, he’s dividing the country and stirring up untold dissension, the kind of which led up to the Civil War in the 19th Century. We cannot go on like this. Governments exist to protect people from criminals and otherwise stay the hell out of people’s lives. This has been truer in America than anywhere else on earth. Imposing social and economic policies, Communist-style, from above will not be tolerated by all Americans, not forever. We’re heading towards calamity, on our present course, because we have allowed ourselves to abandon the principle of limited government. That’s the real issue here; not transgender bathrooms.

Progressives are so inconsistent; it’s almost funny. When you draw a cartoon or even utter a word offensive to Muslims, and they reply with brutal acts of violence, progressives say: “Well, you got what you deserved. You shouldn’t offend them.” But a lot of people find transgender bathrooms offensive, just like some people will find anything offensive. By telling these people, “Tough! We’re the boss and you’re going to do what we say!” you’re not instilling loyalty, reason or anything. We’re supposed to walk on eggshells around Muslims, or any other group progressives consider above criticism, yet millions of Americans are expected to toe the line with Obama’s one-size-fits-all, command-and-control edicts emanating from Washington DC.

Schools are supposed to be about educating young minds, not imposing government propaganda (either from the left-wing or right-wing perspective). We’re supposed to teach young people how to think, not to follow orders. But following orders is what governments require young and older people to do. We would have been so much better off if we had left government to the role of pushing criminals around rather than pushing all the rest of us around. How much more of this will Americans be willing to take?