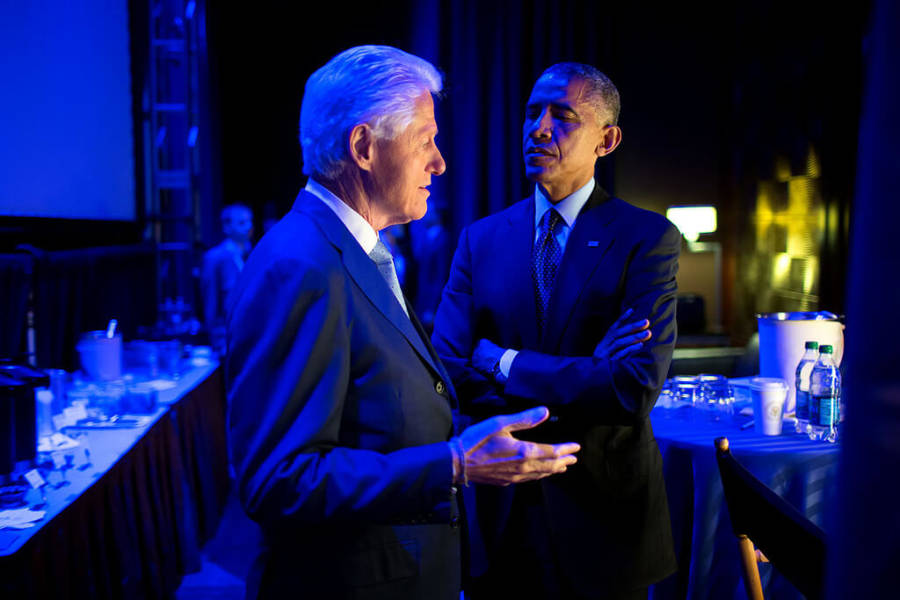 While campaigning for his wife Hillary in Philadelphia on Thursday, Bill Clinton implored the Black Lives Matter movement to “tell the truth” by admitting that they defend people who kill other black people.

The former president’s speech was being interrupted by protesters when Bill Clinton said, “This is what’s a matter: I don’t know how you would characterize the gang leaders who got 13-year old kids hopped up on crack and sent them out on to the street to murder other African American children. Maybe you should thought they were good citizens. [Hillary Clinton] didn’t. She didn’t. You are defending the people who killed the lives, you say matter.”

The former president later apologized, because of political correctness, but he got it right the first time.

Victim organizations like Black Lives Matter are not interested in facts. That’s why they drown out Hillary Clinton, even though her policies, once in office, will probably give them everything they demand, and more.

We should not be making race a factor in the first place. Government should be concerned with protecting all lives equally, and all individual rights equally, without singling out black lives, white lives or any other lives based on demographics.

But if you insist on making race a factor, and you’re upset about black people dying, then you must face the fact that blacks are not the victim of ethnic homicide, but of mass suicide. In the inner cities where the welfare state traps people in the same government-dependent cycles for generations, the crime is the worst. Most of the crime is done by blacks against blacks. The whole reason police have so much to do isn’t because of racism; it’s because of the havoc the welfare state has created in the inner cities.

If you really cared about black lives, then you’d fight for a robust economy. You’d uphold self-responsibility, pride, self-esteem and self-respect, reason, truth, prosperity and economic freedom. You’d fight for a strong police force to arrest and weed out people who assault, steal from, kill or otherwise objectively harm other people. The screams of racism from outrage groups like Black Lives Matter is a distraction from the fact that many black lives are not going well, in part because of the incentives the government creates (intentionally or not) to keep them down, and in part because of their own mistaken choices, such as having children before being emotionally and financially ready, and living off the government for this reason. (Many whites make this same mistake.)

A robust economy, or justice rationally defined, are not what Black Lives Matter wants. That’s why they drown out not only people who disagree with them, but people who agree with them, as well. It’s all part of the outrage society we’re  becoming. Reason, truth, facts and logic have nothing to do with anything. All that matters is that you’re not seen as racist. If you oppose Black Lives Matter, despite all their inherent contradictions and despite the fallacies they spread, then you will be seen as racist. Once you are seen as racist (truth be damned), that’s the end of discussion.

That’s why Bill Clinton backed down. He was closer to the truth the first time; but ultimately, like his wife, he cares more about power than about the truth.

Black Lives Matter is nothing more than a Black Supremacy organization. Like the KKK, it elevates race to the most important factor. It threatens, challenges and brutalizes anyone who disagrees with them, or introduces even a faucet drip of reason into the equation, such as pointing out the fact that blacks die more often at the hands of blacks than whites.

The outrage/victim culture most of us have enabled, by not standing up to the bullies of political and racial correctness, will not tolerate reason; all they have are shouts, screams and threats. You know things have taken a profoundly wrong turn in society, not only when groups like this rise to the surface, but when candidates for office such as Hillary Clinton, who could not be much more of a leftist, are considered way too far to the right to warrant a hearing.