The Urban Religion of Recycling

To not recycle would mean challenging the value of saving the planet. If you don’t recycle, then you don’t care about the earth. It’s not a matter of science, logic or facts; it’s a matter of faith. 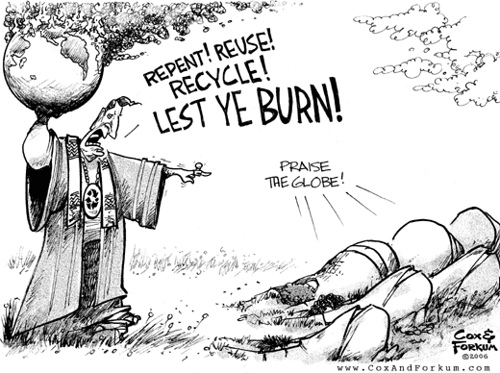 Recycling has been a given in American culture for the last 25 years or so. It seems, to many, ludicrous to challenge it.

But when we recycle, there’s a basic assumption at work. “This is good for the planet, and for the environment.” Otherwise, why take the time to do it?

How much actual difference does recycling make?

Here’s some perspective, offered by John Tierney, who wrote “The Reign of Recycling” at NYTimes.com on 10/3/15: To offset the greenhouse impact of one passenger’s round-trip flight between New York and London, you’d have to recycle roughly 40,000 plastic bottles, assuming you fly coach. If you sit in business- or first-class, where each passenger takes up more space, it could be more like 100,000.

Even those statistics might be misleading. New York and other cities instruct people to rinse the bottles before putting them in the recycling bin, but the E.P.A.’s life-cycle calculation doesn’t take that water into account. That single omission can make a big difference, according to Chris Goodall, the author of “How to Live a Low-Carbon Life.” Mr. Goodall calculates that if you wash plastic in water that was heated by coal-derived electricity, then the net effect of your recycling could be more carbon in the atmosphere.

“If you believe recycling is good for the planet and that we need to do more of it, then there’s a crisis to confront. Trying to turn garbage into gold costs a lot more than expected. We need to ask ourselves: What is the goal here?” says David P. Steiner, the CEO of Waste Management, the largest recycler of household trash in the United States.

Others have wondered about recycling even on the basic, common sense level. On the one hand, you’re doing it to save the environment. On the other hand, you’re employing the services, time, fuel, energy and potentially wasteful activities of the recycling trucks, plants, and all other carbon-based activity involved in the practice of recycling. Why are we so quick to worry about (and even condemn) the alleged wastefulness of carbon-based activity in one context, while blanking out its possible or actual effects in the context of recycling only?

Recycling operations have their own environmental costs (as John Tierney writes at NYTimes.com), like extra trucks on the road and pollution from recycling operations. Composting facilities around the country have inspired complaints about nauseating odors, swarming rats and defecating sea gulls. After New York City started sending food waste to be composted in Delaware, the unhappy neighbors of the composting plant successfully campaigned to shut it down last year.

All the trash generated by Americans for the next 1,000 years would fit on one-tenth of 1 percent of the land available for grazing. And that tiny amount of land wouldn’t be lost forever, because landfills are typically covered with grass and converted to parkland, like the Freshkills Park being created on Staten Island.

Recycling makes little to no sense on its own terms. Unless you view it psychologically, and ultimately philosophically.

Mayor Bill de Blasio of New York says that recycling is “the way of the future if we’re going to save our earth.”

It’s as simple as that, in many people’s minds. To not recycle would mean challenging the value of saving the planet. If you don’t recycle, then you don’t care about the earth. It’s not a matter of science, logic or facts; it’s a matter of faith.

I once read the opinion that the whole environmentalist movement, popularized (initially) by recycling, is kind of an urban religion. People who live in cities (or sprawling suburbs) tend to be insulated from the farms, factories and all the things that go into manufacturing products. They experience the compounded, decades-long results of science and free enterprise, but do not, in most cases, perceptually grasp their causes, much less see them as virtuous things. In their mindsets, these kinds of things just happen. It may be part of the reason why people in cities overwhelmingly support the environmentalist movement and other attitudes associated with the general anti-capitalist, anti-market bent of the candidates they elevate into power. They either do not know what they’re attacking and trying to curb, or they do not care.

Perhaps most significantly, from a psychological point-of-view, the urban religion of environmentalism helps alleviate guilt. Guilt over what? It boils down to the way many people view, or at least subconsciously feel about, human material advancement on earth. Instead of looking at technology as a great and wondrous thing, something that enables billions of human beings to survive and flourish as never before (thanks especially to fossil fuels), they look at all this human advancement as bad, dirty, somehow shameful or at least requiring a reason to atone.

Recycling offers the perfect, concrete-bound, uncritical and easy way to atone. “Look at me. I recycled. Now my conscience is clear.” The problem? If there’s really something to feel guilty about for participating in the modern day results of technological and capitalistic development, then recycling is a drop in the bucket. To get serious, you’d have to support — and be willing to participate in — an actual dismantling and reversal of the entire twenty-first century, post-industrialized, fossil fuel-generated society as we know it. Trust me, that society would look, smell, feel and be very different from the one we know now; and most of us would perish.

Psychologically, recycling has become so much a part of normal everyday practice that it has become sacrilegious, on the premises of urban religion, to even question it.

Even advocates of recycling see the folly in much of it. E.P.A. official J. Winston Porter, while supporting some recycling, still has said: “The zero-waste goal makes no sense at all — it’s very expensive with almost no real environmental benefit.”

Interestingly, Porter advised state officials that no more than 35 percent of the nation’s trash was worth recycling, but some ignored him and set goals of 50 percent and higher. Most of those goals were never met and the national rate has been stuck around 34 percent in recent years.

What people forget is how science in a free society, combined with unfettered markets (if left alone), have a way of producing results that for the most part take care of environmental problems over time. Back in the 1970s, early day environmentalists predicted things like mass starvation and other catastrophes from overpopulation. The world’s population has grown since that time, and advances in both science and business have ensured that people, on the whole, flourish better than ever. Air and water are cleaner, not because of government intervention, but because of technological advancement and consumer demand; without these two things, government would be beside the point. People too often assume or fantasize that government is solving problems that actually science, capitalism and real individuals are solving.

The broader point is that all improvements come from positive development — not negation. Positive developments occur via the knowledge obtained by free, thinking minds (thanks to science) and the innovation and technology developed by free, profit-seeking businesses (thanks to capitalism). Whatever human failings exist, and however those failings play out in various contexts, science and free enterprise are the only means we have for salvation.

Recycle all you want. Call it science; but it’s really religion.