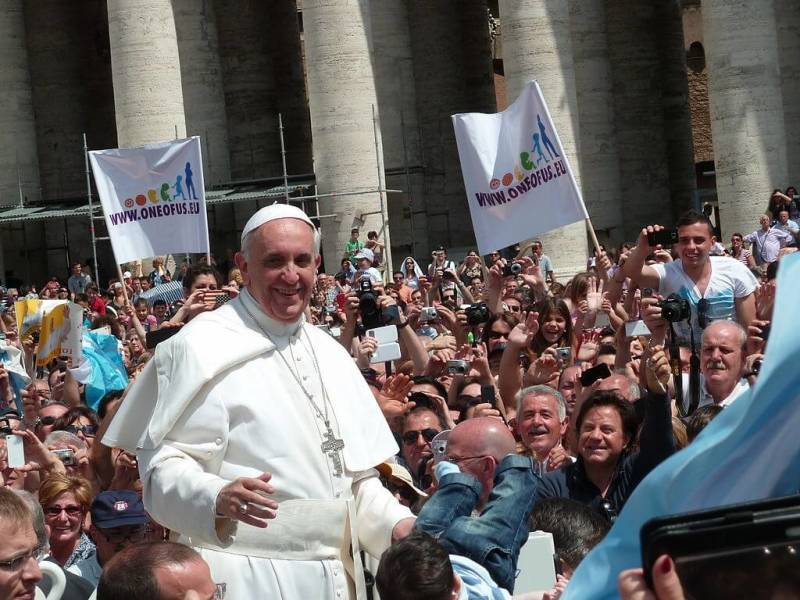 Pope Francis will hold a private meeting with Fidel Castro during his visit to Cuba later this month if the former president’s health allows it, according to three Vatican officials with knowledge of the matter. [Bloomberg News and Newsmax.com 9/10/15]

“If Castro is up to it, I fully expect them to meet for a private talk,” said papal biographer Austen Ivereigh. [Pope] Francis “sympathized with the original aims of the Cuban revolution and was very supportive of the desire for economic sovereignty, for social justice. He was deeply disappointed when it went communist.”

How can the Pope claim to be against Communism, while going out of his way to meet with the last remaining leader of 20th Century Communism?

If Thomas Jefferson were still alive, it would be like going to visit him while saying, “I so regret that America went for individualism and republicanism.” Then why on earth would you want to go to that system’s most noteworthy and visible symbol?

This Pope is downright wacky on his own terms. But make no mistake: Whether he loves official Communism or not, he loves the ideas that make it possible.

For evidence, consider some of Pope Francis’ quotes over the years:

We have observed that, in society and the world in which we live, selfishness has increased more than love for others, and that men of good will must work, each with his own strengths and expertise, to ensure that love for others increases until it is equal and possibly exceeds love for oneself.

Individual rights, upheld by a democratic republic and a rights-respecting Constitution, implicitly stand for self-interest. Under the American system, at least as originally understood, each life is an end in itself. That idea formed the basis for the rights to life, liberty and the pursuit of happiness. This is selfishness, rationally speaking.

Selfishness, rationally speaking, is a good thing. That’s why individual rights and freedom are good things, too. Most of America’s founders acknowledged and agreed with this claim. Almost nobody today will do so, although almost everybody in America lives a life of rational self-interest (in some form); and then most feel guilty for it whenever a Pope (or a president) morally denounces them for it. (The Pope and the president have plenty of capitalism-induced comforts too, by the way.)

Rational self-interest embodied in capitalism and individualism are the very ideas that Communism and all other forms of collectivism or socialism despise. Pope Francis stands on that side when he places “love for others” above the good of individuals. What he’s basically saying is that the individual’s primary purpose is to serve others, not live for oneself. While such an attitude does not necessarily make you a Communist, it certainly makes you hostile to the ideas of individual rights. In fact, if living for others rather than for self is the most important reason for living, then individual rights, including economic freedom, are unnecessary. They get in the way.

We all have the duty to do good.

We all know what Pope Francis means by doing “good.” The good means sacrifice of self for others. Or, sacrifice of self to the collective. He and the Communists might disagree on the particulars. But their end goal is the same. Maybe this is why Pope Francis has such positive emotions for Fidel Castro that he wishes to go visit him, on his seemingly unending death bed.

Wow. This might even be more Communistic than Communism. Communism and democratic socialism at least pay lip service to the value of a work ethic. “Workers of the world unite!” Workers are considered the heroes who make everything happen.

It’s called the labor theory of value, which means that the individual, thinking mind (including the innovations of capitalists and scientists) contribute nothing to human advancement; only manual and menial labor do. This is why, under Communism, only workers have rights, while innovators, producers and wealth creating profit-makers have no rights.

In practice, views such as the labor theory of value lead to economic stagnation and emotional demoralization. (Ask anyone who has lived under Communism.) When you minimize or, in effect, outlaw the ability of innovative geniuses and profit-makers to do their thing (people like John D. Rockefeller, Bill Gates, Steve Jobs, Thomas Edison), then society falls apart. It has happened in every Communist or similarly socialist society in history, varying only in degree.

It sounds like Pope Francis, by making this statement, is already demoralized, emotionally at least. That’s what leads to his distaste for the work ethic.

If investments in banks fall, it is a tragedy, and people say, ‘What are we going to do?’ but if people die of hunger, have nothing to eat or suffer from poor health, that’s nothing.

Actually, the reason people get so upset when banks collapse, as they did in 1929 and 2008, is because it directly and indirectly affects their own well-being. If economic activity ceased tomorrow, the whole world as we know it would end. What would Pope Francis do then?

The Pope’s whiny, guilt-inducing complaints are inconsistent with the reverence many afford him and his viewpoint. But they’re very similar to the angry, resentful whining we have heard from Communists like Fidel Castro in the past, and the postmodern social democrats of today.

When I was a seminarian, I was dazzled by a girl I met at an uncle’s wedding. I was surprised by her beauty, her intellectual brilliance… and, well, I was bowled over for quite a while.

This is the man to whom many turn for perspective on love, morality, sex and marriage. In his own life, he repressed, suffocated and gave up his aspirations in this area. If it were anyone other than the Pope, most of us would call it neurotic, irrational and even insane.

Emotional and sexual repression are not honorable. They are self-sacrificial, sad and, quite frankly, disturbing. Not everyone is able to find the romantic love one wants, and romantic love does not always last as long as we wish it might; but to deliberately give it up, on principle, as a virtue? If that’s “morality,” you can have it!

“I can only say that the communists have stolen our flag. The flag of the poor is Christian. Poverty is at the center of the Gospel … Communists say that all this is communism. Sure, twenty centuries later. So when they speak, one can say to them, ‘But then you are a Christian’.”

I have to give Pope Francis credit here. He gets that the central principle unifying both Catholicism/Christianity and Communism is the same: Your life does not belong to you. It belongs to forces other than — “greater than” — yourselves. Life is not an end itself; it’s a means to the ends of others: God, society — or, in Pope Francis’ case — both.

The world has its first openly Marxist Pope. A Marxist who believes in God is still a Marxist.

No wonder the Pope wants to visit Fidel Castro.

About Dr Michael Hurd
Dr. Michael Hurd is a psychotherapist, columnist and author of "Bad Therapy, Good Therapy (And How to Tell the Difference)" and "Grow Up America!" Visit his website at: www.DrHurd.com.