Pope Francis' own native Argentina was once among the leading economies of the world, before it was ruined by the kind of ideological notions he is now promoting around the world. 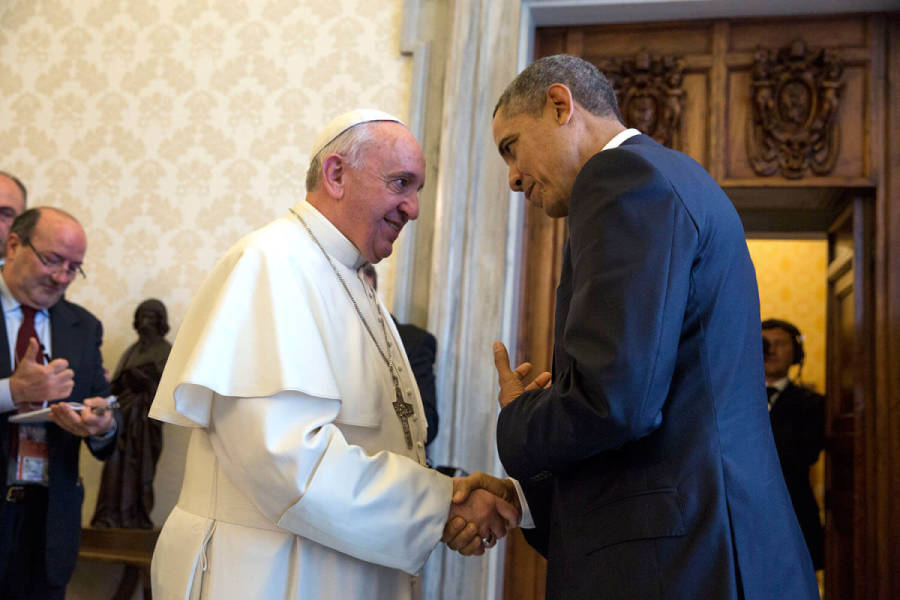 Pope Francis has created political controversy, both inside and outside the Catholic Church, by blaming capitalism for many of the problems of the poor. We can no doubt expect more of the same during his visit to the United States.

Pope Francis is part of a larger trend of the rise of the political left among Catholic intellectuals. He is, in a sense, the culmination of that trend.

There has long been a political left among Catholics, as among other Americans. Often they were part of the pragmatic left, as in the many old Irish-run, big city political machines that dispensed benefits to the poor in exchange for their votes, as somewhat romantically depicted in the movie classic, “The Last Hurrah.”

But there has also been a more ideological left. Where the Communists had their official newspaper, “The Daily Worker,” there was also “The Catholic Worker” published by Dorothy Day.

A landmark in the evolution of the ideological left among Catholics was a publication in the 1980s, by the National Conference of Catholic Bishops, titled “Pastoral Letter on Catholic Social Teaching and the U.S. Economy.”

Although this publication was said to be based on Catholic teachings, one of its principal contributors, Archbishop Rembert Weakland, said: “I think we should be up front and say that really we took this from the Enlightenment era.”

The specifics of the Bishops’ Pastoral Letter reflect far more of the secular Enlightenment of the 18th century than of Catholic traditions. Archbishop Weakland admitted that such an Enlightenment figure as Thomas Paine “is now coming back through a strange channel.”

Strange indeed. Paine rejected the teachings of “any church that I know of,” including “the Roman church.” He said: “My own mind is my own church.” Nor was Paine unusual among the leading figures of the 18th century Enlightenment.

To base social or moral principles on the philosophy of the 18th century Enlightenment, and then call the result “Catholic teachings” suggests something like bait-and-switch advertising.

But, putting aside religious or philosophical questions, we have more than two centuries of historical evidence of what has actually happened as the ideas of people like those Enlightenment figures were put into practice in the real world — beginning with the French Revolution and its disastrous aftermath.

Both the authors of the Bishops’ Pastoral Letter in the 1980s, and Pope Francis today, blithely throw around the phrase “the poor,” and blame poverty on what other people are doing or not doing to or for “the poor.”

Any serious look at the history of human beings over the millennia shows that the species began in poverty. It is not poverty, but prosperity, that needs explaining. Poverty is automatic, but prosperity requires many things — none of which is equally distributed around the world or even within a given society.

Geographic settings are radically different, both among nations and within nations. So are demographic differences, with some nations and groups having a median age over 40 and others having a median age under 20. This means that some groups have several times as much adult work experience as others. Cultures are also radically different in many ways.

As distinguished economic historian David S. Landes put it, “The world has never been a level playing field.” But which has a better track record of helping the less fortunate — fighting for a bigger slice of the economic pie, or producing a bigger pie?

In 1900, only 3 percent of American homes had electric lights but more than 99 percent had them before the end of the century. Infant mortality rates were 165 per thousand in 1900 and 7 per thousand by 1997. By 2001, most Americans living below the official poverty line had central air conditioning, a motor vehicle, cable television with multiple TV sets, and other amenities.

A scholar specializing in the study of Latin America said that the official poverty level in the United States is the upper middle class in Mexico. The much criticized market economy of the United States has done far more for the poor than the ideology of the left.

Pope Francis’ own native Argentina was once among the leading economies of the world, before it was ruined by the kind of ideological notions he is now promoting around the world.