As I quickly walked away, I did not want to look back at its towers, battered and bearing the scars of its evil attackers. I do not want to remember the WTC burning or falling, for that was not its essence. 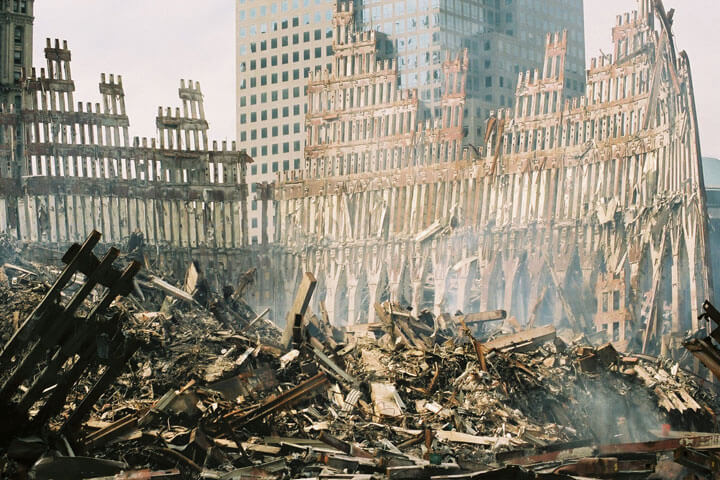 “That particular sense of sacred rapture men say they experience in contemplating nature- I’ve never received it from nature, only from. Buildings, Skyscrapers. I would give the greatest sunset in the world for one sight of New York’s skyline. The shapes and the thought that made them. The sky over New York and the will of man made visible. What other religion do we need? And then people tell me about pilgrimages to some dank pest-hole in a jungle where they go to do homage to a crumbling temple, to a leering stone monster with a pot belly, created by some leprous savage. Is it beauty and genius they want to see? Do they seek a sense of the sublime? Let them come to New York, stand on the shore of the Hudson, look and kneel. When I see the city from my window – no, I don’t feel how small I am – but I feel that if a war came to threaten this, I would like to throw myself into space, over the city, and protect these buildings with my body.”

Nearly three years ago I relocated to work in New York City, at 90 West St., just across the street from World Trade Center Building #2. I was delighted to work in an office so close to what I considered the center of the world. I could imagine that each day I was seeing from my window some of the world’s most important business leaders entering and exiting this building. My office was not so important, not so modern, and not so big, but it was brightened by its proximity to that tremendous building.

When I felt discouraged about the modesty of my momentary work responsibilities and station in life, I would look up and across the way to the towering offices of the WTC and say to myself, “someday I will work up there.” From my window, through the glass of the WTC’s second floor, I could see people eagerly lined up on for the opportunity to see New York from the commanding height of its observation deck. Nearly every day, the tourist busses would park at the streets near my office.

People would get out and gaze– not downward in humiliation and sorrow in penance– but upwards in admiration and benevolence, and smile. People had come from around the world, in part to see this symbol of human accomplishment. I often passed them, walking to lunch or a meeting, and I would smile to them, and stay out of the way of their photographs, and sometimes help them take a picture, or find their way. I did not appreciate the WTC enough. I rarely lifted my own gaze up to the WTC’s peak. I did not want to be taken for a tourist myself — I am supposed to be used to it, I thought. I often thought about going up to the observation deck up top, but never took the time to actually do it. Now it is too late.

People have told me that some of the greatest values are under-appreciated until they are gone. Now I know it is true. Now I am beginning to fully appreciate the value of the WTC and the people associated with it. The greatness of that building saved my life. How many buildings could have been hit by two jumbo jets, and still stand for an hour? Countless lives were saved because people like me had time to flee to safety.

As I quickly walked away, I did not want to look back at its towers, battered and bearing the scars of its evil attackers. I do not want to remember the WTC burning or falling, for that was not its essence. I want to remember its great days, shining in the sun, soaring proudly upwards from the humble earth, holding aloft great men pursuing great accomplishments.

FEEL FREE TO SHARE
Andrew West
Andrew West is a Contributing Economics Editor for Capitalism Magazine. In 1997 he received the Chartered Financial Analyst designation from the Association for Investment Management and Research.