Williams’ sickness resided in his inability and unwillingness to look at people as individuals, and instead to view everything through a collective lens. 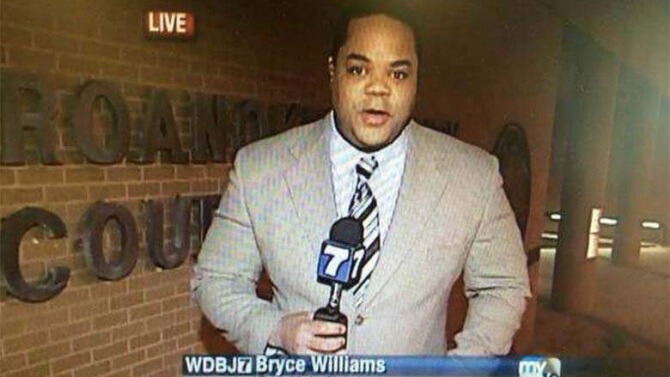 The latest suicide-homicide shooter is taking the psychology of victimization to a new high — or more precisely, a new low.

Bryce Williams reportedly called himself a “human powder keg.” And the rest of us, it seems, are supposed to bow our heads in shame and humility that we are part of the society who supposedly created such a monster — according to the monster, himself.

Bryce Williams murdered two people while they were live on air on WDBJ in Virginia: reporter Alison Parker, and cameraman Adam Ward. After the murders, he went on the run – and while he was on the run, he tweeted out his rationale for the killings, accusing Parker of making “racist comments” and Ward of going “to hr on me after working with me one time!!!” He then posted video to his Facebook and Twitter pages of himself shooting both at point-blank range. Williams is black. Parker and Ward were white.  Williams is gay. Parker and Ward were straight. [breitbart.com 8/26/15]

Here’s the reaction we’re supposed to have:

We’re quick to conclude that such people, while irrational, are also victims of bullies. “That poor Bryce Williams. Being gay and black — just imagine! How the gays and the blacks suffer every moment of their lives. Bow your heads in repentance for what society made him do.”

What we fail to take into account is that it’s people like this who actually are the bullies.

It has nothing whatsoever to do with race, “society,” sexual orientation or anything else. It’s just plain evil.

We have trained ourselves to ask, after these kinds of events, “What pushed such a person over the edge?” And then we’ll hear the usual refrains about racism, homophobia, insufficient health care, insufficiently high taxes on the rich, etc.

Nobody ever stops to ask about the thinking, the actions and choices of the killer himself.

“Thinking and choices? Why, that’s crazy. Nobody that irrational ever made any choices. He must have been a victim.”

We don’t stop and ask, “What about his own thinking and actions led to this?” Instead, we assume that in order to be “pushed” into doing such a thing, it must be something external.

Suicide is often an act of anger. If the anger could be summed up, it would say, “I’ll show you.”

The folly of suicide is that you don’t get to see the reactions you hope for, because you’re dead and gone. It’s irrational on its own terms.

A suicide-homicide is an act of ultimate rage. People who do these kinds of things feel like they’re the victims. Their acts of suicide and homicide are a way to make a point. Although they don’t live to see the results, they would probably like what they see: Millions of people not only being momentarily horrified, but agreeing with the murderer’s classification of him- or herself as a victim. Whatever the President and the Pope have to say about this, rest assured that the killer — if he were alive to hear — would be happily applauding.

Identifying yourself as a victim is the opposite of what generates a state of mental health. While everyone will dismiss this killer’s rage as irrational, few, if any, will identify his sense of victimization as especially irrational. In fact, we’ll all be told to feel a certain sense of guilt or shame over it. Guilt for what? Maybe for owning a gun. Or for not supporting gun bans. Or for not being “progressive” enough. I don’t listen to Obama, but I’m sure he will soon deliver his caustic lecture on how bad we are for not agreeing with him on gun bans, higher taxation, and whatever the next plan for “social improvement” by coercion is. It doesn’t really matter what the reason is. The point is always: guilt. Unearned guilt, that is. If you wish to become or remain mentally healthy…tune it all out. As George Carlin would have said: It’s all BS, and it’s all bad for you.

People too often react to these events with a sense of guilt and shame. “It is a selfish, racist, homophobic, generally anti-progressive society. Shame on society. And shame on me for being a part of it.”

Frankly, I am beyond sick of it. My emotion for it all is something beyond loathing; I don’t quite have the word. The people who do these things are monsters and bullies. They are not victims of anything. They are victimizers of the worst possible kind: The kind who decisively and with forethought take others down with them.

Writing at breitbart.com, Ben Shaprio says: None of which [references to the race/sexual orientation of Williams’ shooting victims] would be relevant, except that Williams specifically cited his identity as a factor in the killings. In a 23-page rambling letter sent to ABC News, Williams wrote that the Charleston church shooting in June should have provoked a race war: “Why did I do it? I put a deposit for a gun on 6/19/15. The Church shooting in Charleston happened on 6/17/15…What sent me over the top was the church shooting…You want a race war (deleted)? BRING IT THEN YOU WHITE …(deleted)!!!” According to ABC News, he claimed he had “suffered racial discrimination, sexual harassment and bullying at work,” that he had “been attacked by black men and white females,” and that he had been “attacked for being a gay, black man.”

Here’s what I’d love to see news analysts, sociologists, psychologists and others talk about: Collectivist reasoning. Collectivist reasoning refers to the fallacy and distortion of thinking of people in terms of group identity (female, black, white, gay, straight, etc.) rather than what they actually are: individuals. While anyone rational was right to abhor the racism of the Charleston shootings, what in the world does the racism of one mindless killer have to do with the activities of random other people whose only offense is being white and/or heterosexual?

Williams’ sickness resided in his inability and unwillingness to look at people as individuals, and instead to view everything through a collective lens. Granted, most people who make this cognitive error do not run out and shoot other people. But it’s the error that rationalized and made the shooting possible, in Williams’ case. (The white supremacist Charleston killer, by the way, made the exact same error.)

Racism is racism. The Charleston shooting and this shooting cancel each other out, if you want to look at it that way. What we’re left with is trying to understand it all. The error of racism is collectivist thinking. It runs both ways.

That’s not how most will interpret this tragic event. To see it as anything other than the inevitable manifestation of supposedly rampant anti-black racism and homophobia will land yourself in the category of being a racist or homophobe. Instead, the politicians will throw more money at social programs, saying, “Look at me…I’m compassionate,” and call it a day.

We have to stop thinking this way. We have to start saying, “Shame, shame” about the killer, and stop feeling shame within ourselves. The enemy is not ourselves, the vast majority of whom would never dream of doing such a thing as Bryce Williams did. The enemy is him — and others like him, who should not be psychologically excused, but morally condemned as the moronic, evil and nasty bullies and deserving losers that they are.

While the loss of his victims is a tragedy, Bryce Williams did the world a favor by ridding the world of himself and his miserable outlook. Could he have changed his outlook? Certainly. But he chose not to do so. And he decided to take a couple of completely innocent people along with him.

Good riddance to Williams — and to all bullies like him.