Books: Inside the Criminal Mind

Criminals are criminals because of the way they think. 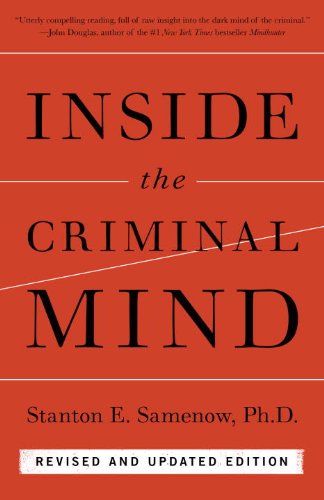 Until Stanton Samenow, Ph.D. came along, nobody ever even hinted at the truth: Criminals are criminals because of the way they think.

Inside the Criminal Mind 2014 edition avoids the traps of theory detached from evidence, as well as evidence without reference to theory. Real-life case studies illuminate the thinking habits of typical criminals, and conclusions are not evaded. The book is neither liberal nor conservative; it’s simply truthful. It starts with the facts, and generalizes to conclusions about the distinguishing characteristics of the criminal mind. It does so in a clear, logical and coherent fashion that is at once intellectual and intelligible to any interested person, whether scientist, clinician or casual reader.

Over the years (with the earlier edition), I have known people who read the book and gain insight about themselves or others they know, including non-criminals. Although it’s primarily a study of the criminal mind, Dr. Samenow’s astute observations open up insights and discussion into the nature of human psychology as something determined primarily by the way a person thinks.

The first edition was published in 1984, and this newly released 2014 edition expands on the original without altering its status as a groundbreaking book. The findings and themes are the same, only more clearly illuminated by case studies more familiar to our contemporary era: terrorists, the D.C. area snipers, substance abuse, sexual crimes, prescription drug abuse. The nature and magnitude of crimes has changed over the decades, but the distinguishing characteristics of the criminal mind have not.

The book explains why parents don’t turn children into criminals, and supports those findings with research. Although most assume that criminals are neglected and rejected children, Samenow’s decades-long studies (along with that of his mentor, Dr. Samuel Yochelson at St. Elizabeth’s Hospital in Washington, DC) suggests that young criminals-in-waiting actually reject and even terrorize their parents.

Does poor schooling or insufficient funding for schools create criminal behavior? Actually, no. Most poorly schooled children  do not turn into criminals; young criminals actually reject education as something unnecessary and beneath them.

Does unemployment lead to criminal behavior? Unemployment is a hardship, but it’s not the cause of criminal behavior. Criminals view themselves as above conventional employment. They feel entitled to material and emotional gain without the effort and struggles endured by other people. At root, a criminal feels that he or she is special and different, and is therefore entitled to rape, cheat, lie, steal or kill in order to honor this false belief.

What about psychotherapy or psychological intervention for the criminal? Does it work, or can it work? Are criminals capable of changing their methods of thinking and correcting their errors? You’ll have to read the book to find out the answer.

Inside the Criminal Mind was and remains a classic. Don’t miss the new edition even if you read the first. It’s a brilliant insight not just into how criminals think, but about human nature itself, with up-to-date case histories and examples.

The next time you read of a horrible murder, mass shooting or terrorist event, you won’t have to ask yourself, “Why? How?” Stanton Samenow’s book contains the answers, based on many years of actual evidence, carefully gathered and studied.

I enjoyed reading this book. It reminded me of why I chose to pursue psychology, and how intelligible and concise a field it ought to be, and might yet one day become.