Obama Stomps His Foot Over Netanyahu

Israel is not an enemy. This shouldn’t even be a squabble in the first place. 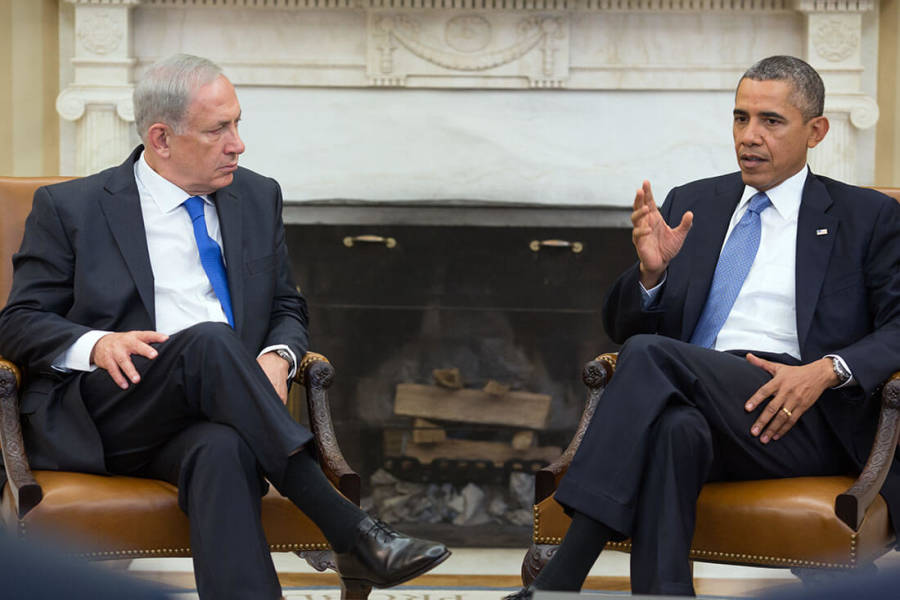 Regarding the Israeli prime minister’s decision to speak before Congress, yesterday the Chicago Tribune reported in a 1/26/15 commentary:

Washington’s reaction to this breach in protocol was immediate. The White House and State Department made it clear that they would not meet with the Israeli leader. One American official was quoted in the Israeli media saying that not having the courtesy to call the White House to inform the administration that he was scheduling a speech before Congress “is not the way people act. … It is unprecedented. It is barbaric behavior. It is so impolite that it is disgraceful. It is simply inconceivable.” The same official noted that “the Israelis know how to pick up the phone … screaming for help” when it comes to opposing Palestinian efforts at the United Nations or the International Criminal Court, or for more help with the Iron Dome air defense system. Another American official reminded the Israelis that Obama will be president for two more years and doesn’t have to worry about another election campaign.

Keep in mind that this was the description of events in an article openly hostile to Republicans in Congress, and openly sympathetic to Obama. The writer actually thinks this White House reaction was a good and justified thing.

By what stretch is it “barbaric” to snub the U.S. President, especially when that President has been unfriendly if not hostile to your nation’s very existence for the entire length of his term in office?

This is the reaction of a dictator and a narcissist: How dare you offend me runs beneath the lines.

One of the reasons Obama initially held such appeal — to some people, anyway — was his seeming cool demeanor under pressure. But as this outburst and exaggeration shows, he’s anything but calm and mature. He’s petulant and narcissistic. He’s America’s petulant, bratty and emotionalist prince, which perhaps says a lot about the kind of society America has largely become, to tolerate or even embrace someone like this as President.

Perhaps the real thing that offended Obama and his people here is recognition that the American system of government has a separation of powers. In a rare display of spine, the Republican Speaker of the House, John Boehner, bypassed the President and invited the prime minister to speak before Congress. The resulting reaction from the President amounted to, “He can’t do that!”

He can’t? Who says so?  We have three branches of government, not one. Just as the President is entitled to invite or not invite whom he pleases to the White House, the Speaker of the House of U.S. Representatives is entitled to the same decision-making in the legislative chamber he leads.

Obama’s reaction here is revealing, and it’s consistent with all his unilateral executive actions where he ignores the Constitutional limits placed on his own office. Think his unilateral legalization of illegal immigrants by executive order. Think his routine suspension of, and reinstatement of, elements of the Obamacare law when it suits his purposes, all by executive order. Think of his implementation of environmentalist legislation he can’t even get his own party to accept, imposed piecemeal via executive order through the EPA. He’s threatening much more before he leaves office, and it’s little wonder he feels entitled not to be questioned or embarrassed, even when it’s all due to his own actions.

Obama was supposed to be a brilliant constitutional law professor and scholar. Surely he knows and understands what even some high school students grasp: That the United States government was given divided powers. From that perspective, there’s no basis for the rage and child-like foot stomping that resulted from Congress’ perfectly legitimate decision to invite Netanyahu to speak.

From a dictator’s point-of-view, dissension is intolerable. Yet this doesn’t apply only to Obama. It applies to the resulting psychology emanating from any authoritarian political philosophy. Obama, like his progressivism, is all about government power, control and authority (only when initiated by progressives, of course). In his mind, the Republicans and Congress (his own party too, probably) get in the way. He knows what’s right, he’s morally energized by his unyielding viewpoint that he’s right, and by God, nobody should get in the way.

For reasons that really shouldn’t be such a mystery, Obama opposes sanctions or just about any other policy of holding the Iranian theocracy accountable for its actions. Netanyahu has been a principled and stalwart defender of Israel and — by extension — individual rights, relative to that part of the world, for his entire career. He will never enjoy any support from the Obama administration, and he was right to accept Boehner’s invitation to speak before Congress over Obama’s head.

Israel is not an enemy. This shouldn’t even be a squabble in the first place. As Netanyahu has said, “And by the way, a piece of news, Israel is the one country in which everyone is pro-American, opposition and coalition alike. And I represent the entire people of Israel who say, ‘Thank you, America.” And we’re friends of America, and we’re the only reliable allies of America in the Middle East.”

He’s right. Israel is pro-America, because — given the threats they face from Iran, Palestinian terrorists and now ISIS — they grasp the stakes. Their lives are literally on the line every day, civilian or military. More and more Americans don’t really grasp what freedom is. They see it as some sort of entitlement or benefit from the government.

Israel may be pro-America, but America seems more divided. On the one side we have a Congress which largely supports Israel. On the other side, we have a President who only supports Israel nominally — and even then, only on a good day. Who can blame Netanyahu for rushing to the side of the American officials who still support him and his nation?