As I previewed last month, the new and final part of libertarian businessman John Aglialoro’s independent movie trilogy adaptation of Ayn Rand’s novel, Atlas Shrugged, features Christian libertarian ex-congressman Ron Paul of Texas. It’s a plot point that, however small, makes no dramatic sense. Like much of this movie, easily the worst of the three […] 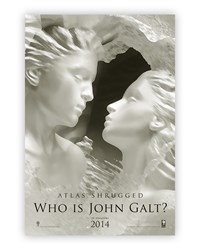 As I previewed last month, the new and final part of libertarian businessman John Aglialoro’s independent movie trilogy adaptation of Ayn Rand’s novel, Atlas Shrugged, features Christian libertarian ex-congressman Ron Paul of Texas. It’s a plot point that, however small, makes no dramatic sense. Like much of this movie, easily the worst of the three pictures, Ron Paul’s cameo both distracts from whatever remains of Rand’s philosophical theme and distorts the meaning of Atlas Shrugged.

Introduced by John Stossel, screened at this year’s libertarian FreedomFest in Las Vegas and opening in theaters nationwide this September, the film, Atlas Shrugged: Who is John Galt?, fundamentally changes Rand’s plot (stop reading this if you insist on seeing movies without any essential plot knowledge).

I’ll get right to the fact that Atlas Shrugged 3 gives Rand’s brilliant story a happy and, even on its terms, undeserved ending. With an awful cast (the emaciated actress playing Dagny this time misinterprets the character’s rationality as a blank slate) and forementioned transgressions peppered throughout the 90-plus minute picture, the movie pastes a news montage and begins in earnest with a poorly staged adaptation of the 20th Century Motor Company scene. Everyone looks like an actor and the extras overemote. They’re not alone. John Galt is portrayed by an actor who means well but is apparently directed to come off as a soap or soft core porn star. “This is John Galt speaking…” should be delivered with a blended sense of heart-skipping dread and anticipation, both crashing down and cashing in on the events preceding the great, momentous line. Here, it plays as a self-conscious voiceover. This is Galt as studmuffin, not as the man who invents – and stops – the motor of the world.

As depicted, Galt’s Gulch could double for a Hallmark Christmas movie, complete with luminaria, and Francisco d’Anconia, who is supposed to have grown up with Dagny, is played by an actor who appears to be old enough to be her grandfather. At least he projects competence. This Dagny is so vacuous she couldn’t run a rinse cycle let alone a transcontinental railroad. When she awakens after Part 2‘s plane crash in the Valley, the face with no fear, no pain and no guilt achingly portrayed in Rand’s poetic scene is nowhere to be found. Neither is Ayn Rand’s crucial line about never needing to take any of it seriously. There are only actors who resemble the Marlboro man (Ellis Wyatt), male model types in neatly trimmed facial hair (Ragnar) and Foster Grants (Galt) and lots of bugs around Hugh Akston. Somehow, Taggart Transcontinental, the best thing about Part 1, became the equivalent of a commuter rail line. Forget about making love on the train tracks, too.

It gets worse. With chants of “We Want Galt!” from the American public, the opposite of Rand’s point in the novel, which dramatized that the reader faces a fundamental philosophical choice, and cameos from Fox News personalities, Bitcoin and Glenn Beck, the central thesis that the power of the West is fading in proportion to enslavement of the man of ability is utterly trashed. In its place, without a single reference to altruism or self-sacrifice (on the contrary, Dagny silently sanctions sacrifice) is a bastardization (that is the word for this movie) of Atlas Shrugged as populism. With Eddie Willers saved, dispensing with another key point from the novel about what happens in such a collapse, and Cherryl’s life cruelly tossed aside as an afterthought – betraying what Rand’s philosophy holds as the ultimate value – the theme here is that libertarianism will save the world. Among the glaring inconsistencies and inversions are Dagny’s ever-changing hair from straight to permanent wave and back, clean-shaven villains and facial-haired heroes and, worst of all, Galt’s agonizing torture minimized in every sense; the counterpoint to Christ on the cross is reduced to a carefully posed and partially clothed actor making faces to special effects.

That it’s all dramatized in the style of a flat, boring cable movie where nodding off makes not a lick of difference seems to fit what has turned out to be an ill-conceived undertaking by a businessman who does not understand the novel. The proof of this comes straight from the businessman’s mouth. As Aglialoro told the premiere audience, he made this trilogy to “save America from government.” Herein lies the libertarian’s anti-intellectual error across the decades. Ayn Rand and Atlas Shrugged (and Rand’s philosophy, Objectivism) do not in any sense seek to save America from government. Atlas Shrugged dramatizes the heroic tale of a life lived large and, to the extent it’s about the collapse of the West, it’s about saving America from government control. Atlas Shrugged Part 3, as part of the libertarian’s counterfeit claim to Rand’s philosophy, totally fails to check its premises.