Emphasizing emotions over facts, the propellant and powerful America: Imagine the World Without Her, co-written and co-directed by conservative author Dinesh D’Souza, teems with a proper American sense of life. It is limited in its power, which strongly builds yet quickly dissipates, by what amounts to a faith in individualism. Evoking Ronald Reagan, D’Souza understands […] 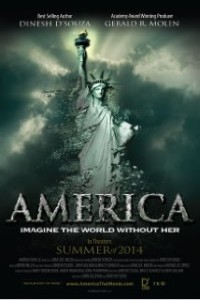 Emphasizing emotions over facts, the propellant and powerful America: Imagine the World Without Her, co-written and co-directed by conservative author Dinesh D’Souza, teems with a proper American sense of life. It is limited in its power, which strongly builds yet quickly dissipates, by what amounts to a faith in individualism. Evoking Ronald Reagan, D’Souza understands what it means to make use of facts and history in words and pictures and there are plenty of each in America. But this independent movie, which strikes a chord in this deeply wounded and crippled nation, is not a recreation of history. It is not a documentary. It is not a philosophical examination of the country for which it is named.

America is pure, potent propaganda. As such, it is relatively well done. Better than Sicko, or most conservative-themed movies, America, which I saw at a screening during the libertarian FreedomFest in Las Vegas, where I had the opportunity to meet Mr. D’Souza, grabs a hold on what’s meaningful about the United States and, in certain stories and segments, portrays an American sensibility. This is not to say everything depicted, with historical portrayals and reenactments, is merely superficial. Much of what’s here is compelling. Some of the tales and excerpts are thought-provoking. Everything is put together. Nevertheless, America amounts to an exercise in “what if…?”

It takes 15 minutes to get going, following a Revolutionary War setup, unmistakably themed to sacrifice, that undercuts the picture’s call to resistance. The five-part movie covers the American Revolution, the Civil War, World War 2 and what narrator D’Souza describes as the restoration, which very much in this perilous time remains to be realized (this is why it’s an emotional film for those who love the country). Beginning with images celebrating the Industrial Revolution, which the film never accounts for, America breaks down the basic case for Barack Obama as an American destroyer. This case is made with emotionally powerful symbols, such as the Lincoln and Jefferson memorials, the White House and Mount Rushmore, being visually erased as the argument against America is made with key interviews from leftist principals – Chomsky, multiculturalists and others – interviewed by D’Souza. Their points are represented, not laid out, and he deals with their points with relative clarity and even-handedness.

D’Souza is not exhaustive, however, and he doesn’t pretend he wants to be. He hasn’t a moment to spare, briskly moving along to relevant facts, points and counterpoints, and the audience will learn about black slaveowners (yes, you read that right), Frederick Douglass meeting Abraham Lincoln, New Left terrorist and college professor Bill Ayers, the selling of Manhattan by Indians, and one exceptional black entrepreneur. As the five-point case against America is made – racism is central – D’Souza convincingly illustrates with his excerpts, facts and visuals that Obama, Elizabeth Warren and other New Leftists seek not to remake America but to unmake America and by the evidence presented here and not presented here, the proposition is undeniable. He does so ploddingly, with a proper and searching tone, stating rightly that “if [Americans’] wealth is stolen [as leftists claim], then we must give it back.” D’Souza is a sincere advocate and he is also persuasive. After Texas Sen. Ted Cruz makes a brief appearance in a segment on the La Raza accusation that the U.S. seized Mexico’s territory, D’Souza asks “how many people in Mexico today wish the U.S. had kept all of Mexico?”

The “what if…?” theme plays across America, underpinning the entire experience, which is compiled of solid stories about great Americans such as Douglass, Lincoln and General George Washington among others, portrayed in bits by poorly cast actors who recreate certain excellent moments in U.S. history that counter leftist dogma time and again and build to a strong case for U.S. moral superiority, though D’Souza does not and would not put it that way. He relies instead on the conservative, which is to say Judeo-Christian, ethic that America is good because she helps others. Citing U.S. sacrifice in Vietnam, Iraq, Afghanistan and Germany, he correctly demonstrates that the U.S. acted in self-sacrifice, not self-interest, in each major war. He will not even cite as a side effect that the U.S. gained from any military action; we sacrifice property, oil and lives for the sake of others. Of course, this plays right into the leftists’ agenda, but D’Souza soldiers on in defense of capitalism – presumably because that, too, helps others – making a strong and effective and, exploiting his own ethnic origins in India, humorous case. The argument for the freedom that brought the industrial revolution is always mixed with selflessness, whether praised by Bono or faith-based Star Parker; by America‘s reckoning, capitalism only exists at the mercy of serving God (says Star Parker) and helping others.

But capitalism is good, D’Souza argues, with Bono making the most powerful speech – “wealth in the U.S. is not stolen – it’s created” – and he explains his case in everything from hamburgers to the iPhone. America assails ObamaCare, which is correctly accused of achieving what D’Souza calls a “masterful distortion and extortion” against the nation which gives the impression that Obama’s for us against insurance companies when, in fact, as the fascist scheme necessitates, ObamaCare is for crony insurers against us. That he cashes in by tracing ObamaCare’s origins to radical leftist Saul Alinsky, who influenced both Obama and would-be president Hillary Clinton, is mitigated only by his glossing over the fact that she was drawn into her leftist dogma by a Christian minister. America is thus enlightening, with fresh, relevant facts and a few surprising stings against the NSA and, by implication, conservatives who oppose whistleblower Edward Snowden, ending with a sweeping, tense and emotional roundup to assure the audience that the opponent of Obama who loves America for being good is not alone.

What constitutes the good, especially in an anti-Obama, anti-New Left propaganda picture featuring O.J. Simpson‘s lawyer Alan Dershowitz and Sens. Rand Paul and Ted Cruz, is left undefined or, worse, in service of the New Left’s moral premises. But this will not stop America from igniting passion for Americanism and making decent Americans feel good and that’s not nothing, which is what we get from the Nothing Man. Dinesh D’Souza has made a movie that makes good points for the U.S. and ends with images of Jesse Owens and Elvis Presley and this indicates that he gets what’s great about America, to paraphrase his hero, Ronald Reagan. But he does not define or explain America’s essential principles – not once does his America name individual rights or individualism as the nation’s founding ideal – and this keeps the movie firmly in the feel-good camp; no more, no less.