Ukraine: A Painful Argument for a Foreign Policy of Self-Interest

Vladimir Putin’s actions are detestable and the result of American weakness--intellectual weakness. 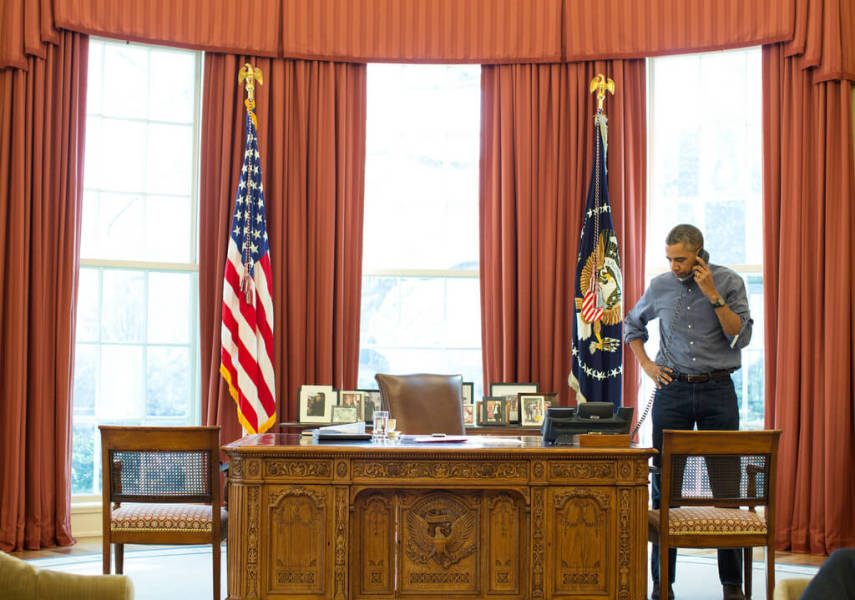 Conservatives across the country are decrying the manipulative tactics and unabashed coercion of Vladimir Putin’s Ukrainian land grab.  Putin, the critics claim, would have never taken such actions if President Obama was perceived as a strong, decisive leader.  It is the president’s abundant weakness and indecision that has enabled Putin’s brazen seizure of territory.

This is only partly correct.  Putin, a former KGB operative, is a strategic, not a tactical, thinker.  Strategic thinkers weigh a myriad of factors, especially when scheming to violate the territorial sovereignty of another nation.

Furthermore, Putin’s actions are more incremental in nature than they are brash.  He first acquired leverage over the Ukrainian government, supplying a multibillion dollar loan package and natural gas at a fraction of the cost.  Russian troops only began streaming into the country after Yanukovych used violent means to disperse protesters.  Even the buildup of Russian troops cannot be called an invasion because the Ukrainian government has allowed the Russians to operate military installations in places such as Sevastopol.

What is ironic is that Mr. Putin has called the new government “fascist” despite the fact Russian actions in Crimea have an eerie resemblance, if not an identical one, to Hitler’s territorial claims in Czechoslovakia.  Hitler, like Mr. Putin, claimed he was only trying protect ethnic Germans in the Sudetenland, which ought to be annexed to the Third Reich anyway.

These basic facts paint Putin as a calculating man with long term, strategic aims.  President Obama is more of a side dish in his cost-benefit analysis.

Besides, declaring President Obama “weak” is a statement of the obvious.  The only living organisms that lack the fortitude to walk all over this president are elected Republicans.

So how is it that the United States finds itself in such an uneasy predicament?  In an acronym, NATO.  Since the 1990s, the United States has pursued a foreign policy of hegemony.  A direct consequence of this policy has been the expansion of international security commitments.  Western European governments have exploited this generosity by continuing their vast social welfare experiments under the protection of an American security bubble.  Their militaries, since the Cold War, have gone from small to miniscule as elected politicians work feverishly to bankrupt their economies with redistributionist policies.

Far worse than lulling American allies into a false sense of security, the United States continued the arbitrary expansion of a military alliance that had become obsolete.  Since German unification in 1990, twelve countries have been added to the North Atlantic Treaty Organization and four more are undergoing the membership process.  Georgia happens to be one of the countries seeking NATO membership.

Georgia, like many of its counterparts, has little strategic significance for the United States.  One reason is that the Kremlin no longer utilizes its nuclear weapons stockpile pursuing global communism.  Additionally, it can contribute little, if anything, to mitigate the burden of American military costs.  In other words, Georgia, like many NATO member countries, is seeking the benefits of American military power.

The expansion of NATO may have come at the expense of better and more interconnected relations with Russia.  Boris Yeltsin, despite his faults, worked tirelessly to liberalize Russia’s political and economic systems.  His protests against NATO expansion fell on deaf ears and became a point of contention in US-Russian relations.  Ultimately, it gave Putin a rationale for a more aggressive approach to Eastern European affairs.

Putin had the opportunity to test the credibility of American security commitments during the Russo-Georgian War of 2008.  Georgia was undergoing the NATO membership process during this period as well, and the United States did next to nothing to assist the Georgian government against the Russian onslaught.  Putin saw the United States as more talk than walk when it came to Eastern Europe and this has enabled him to test his power elsewhere, namely Ukraine.

People like John McCain insist that the United States should exercise its military power to curb and prevent such hostilities from taking place.  People like John McCain, however, have a nonchalant disregard for the severity of potential consequences and, frankly, John McCain has yet to find a war he didn’t like.  His most seething indictment of President Obama’s foreign policy is not that he de-legitimized his own red line on chemical weapons use in Syria, but that he didn’t bomb at all.  It is worth asking Mr. McCain who he supports in that conflict since it is basically an Iranian proxy fighting al-Qaeda militants.

The post-Cold War expansion of NATO was as much a farce as it was a mistake, and innocent people are paying dearly for it.  The lack of American or European resolve has emboldened authoritarians like Putin to use a blunderbuss to achieve political and economic objectives.

Countries with NATO protections are encouraged to pursue blunderbuss policies of their own.  Turkey has made its position known in the Syrian Civil War and, for a period, had numerous artillery exchanges with the Assad government.  Had the Syrian regime taken more serious military action against Turkey, Article 10 of NATO would have been enacted in which all member countries would assist in Turkey’s war with Syria.

A foreign policy of self-interest is long overdue for the United States.  It is the responsibility of the federal government to make serious judgments about the nation’s security needs, who its adversaries are, and what the United States’ long-term objectives ought to be.  The American taxpayers should not be forced to subsidize the military budgets of countries that refuse to pay for their own defense.  More importantly, American families should not fear the possibility of losing a son or daughter in a NATO misadventure.  The Libyan intervention stands as a perfect example.

Countries such as Britain, Italy, and France used their troops in Afghanistan as leverage when persuading President Obama to intervene against Gaddafi’s regime in Libya.  One billion dollars and several bombs later, Libya is now home to gangs, militias, and terrorist training camps.  The American people received four body bags in return for its efforts.  It is morally dubious to argue the United States had a responsibility to protect the people that control Libya now.

Vladimir Putin’s actions are detestable and the result of American weakness–intellectual weakness.  If the United States ever commits to a serious foreign policy of self-interest, dictators and authoritarians will perceive America as both strong and credible.  Until then, we’re stuck shooting spitballs at barbarians.