Written by John Ridley and directed by Steve McQueen,12 Years a Slave, based on the book by Solomon Northrup, deposits us into slavery in the 19th century’s American South. It is an excellent example of the best type of cinematic naturalism, delivering characters to care about in an intricate and layered plot that offers much more to think […]

Written by John Ridley and directed by Steve McQueen,12 Years a Slave, based on the book by Solomon Northrup, deposits us into slavery in the 19th century’s American South. It is an excellent example of the best type of cinematic naturalism, delivering characters to care about in an intricate and layered plot that offers much more to think about than whatever superficial slop Oprah‘s serving up. More than anything else, and there’s a lot of else with this Brad Pitt (World War Z) co-produced film, the movie takes ideas seriously and depicts slavery with honesty and candor.

Foremost, it is the story of Solomon (Chiwetel Ejiofor, whom I first noticed in a 2005 Woody Allen picture), a free black man in the North. We see Solomon when he’s free in New York in 1841, a musician, husband and father. The driving force of 12 Years a Slave is not exactly the actor’s performance as Solomon, though it is very good. It is the undercurrent of life versus death – freedom versus slavery – in every frame, closeup and scene. The film, like its title, suggests both the injustice of slavery and the fact of its ultimate metaphysical insignificance in a thinking man’s life. By reducing slavery to its essentials, in shackles, chains and whiplashes, 12 Years a Slave captures its proper place in history and dramatizes it in the life of an individual. 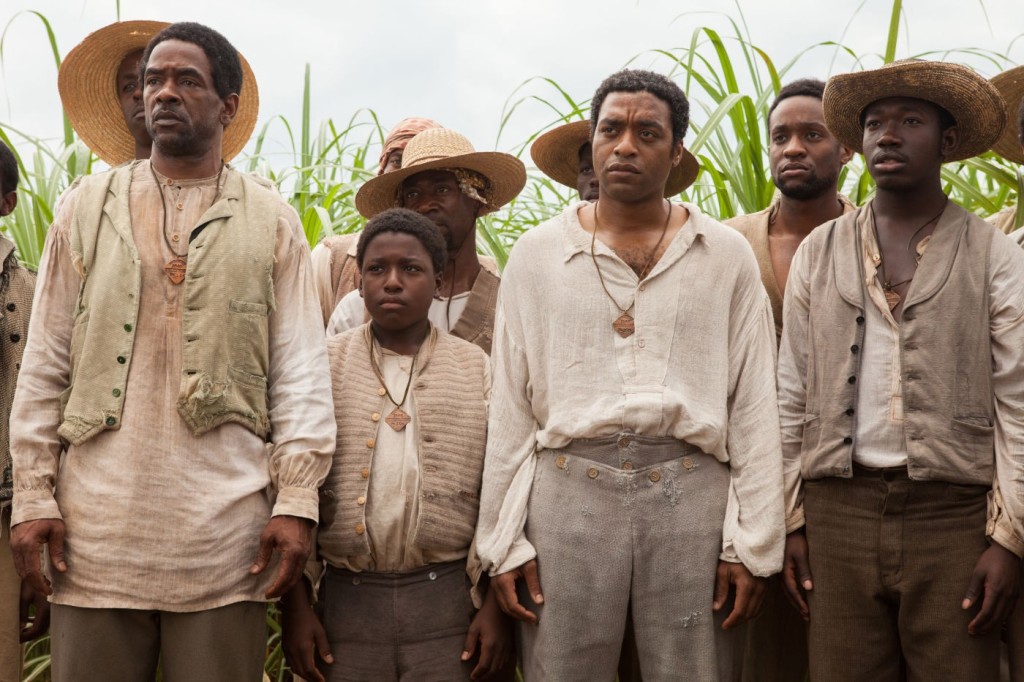 The result is unforgettable. Tricked by a couple of dandies in Washington, DC, and illegally, subversively sold into slavery (by a cruel beast played by Paul Giamatti), Solomon wakes up in chains only to be confronted by a foul, backward creature who regards blacks as subhuman, a commonly held viewpoint in the South and much of the country at that time, drawn partly from erroneous biology. He is quickly warned by a fellow slave that “once in a slave state, there is only one outcome.” The wisdom of those words cashes in later, much later, when the chronic and constant fact of Solomon’s enslavement becomes clear in a long, gradual drain on his soul.

“Help me,” he whimpers out the window early upon enslavement. But he’s encased in brick and chains and there’s no one to listen or care. He’s imprisoned in the South, a wicked part of the world ruled by religion, tradition and stubborn hatred for progress, capitalism and industrialization. 12 Years a Slave does not frame the issue in those terms but it’s there in every scene of the South; the slow-minded, spewing contempt for any small step toward advancement of self-interest. The greasy-haired, toothless malcontents and overseers, the frigid bun-haired belles, even kind, gentle masters such as a man of ability (Benedict Cumberbatch) who praise the exceptional while adding that they suspect “no good will come of it.” They are each oppressors of man. In this case, Solomon.

12 Years a Slave grants no reprieve to evil, unlike Munich, Life is Beautiful and other appeasement and apologia in film. Solomon is traded, unloaded and enslaved over and over, from master to master, ending up with a drunk who alternates between Christianity and hedonism, played by Michael Fassbender. And, unlike Spielberg’s Schindler’s List, the oppressed are treated and depicted with clarity as individuals, not as a collective. Their faces mark their time: the striking Patsy who serves her master and enrages his wife; each field slave – this is not about house slaves, represented by a frightful character portrayed by Alfre Woodard – who look down and hope they don’t get noticed; the woman who stops to ponder a loss before drawing strength from singing about the river Jordan.

We see the roots of her sense of soul and how they spread out to reach and anchor other wounded men and women so they, too, can draw from what’s divine and instill in themselves a sense of life, not death. Death looms everywhere around them and it is not overdone or overstated, though certain scenes are of course by necessity graphic. Negro spirituals fuel the yearning for freedom that lies beneath slave scars inside their minds. That’s part of Solomon’s story, too. When one of the slaves drops dead in the fields, he is suddenly aware of the years – lost, irreplaceable time – and he feels it deeply, groaning along for the first time, a free man Northerner who’s become a slave down South knowing that his life is not his own and his time is expiring. Soon, he’s walking slower, less proudly, and he reaches the point any man would: hurt and broken and deprived of what he loves: the freedom to create and make his music. 12 Years a Slave dramatizes how we are enslaved by our slavemasters above all in what we love. How the masters take the good – the stroke of a finger on flesh, or a pen on paper, or a bow against a string – and turn it against the good and into something ugly, dark and monstrous. 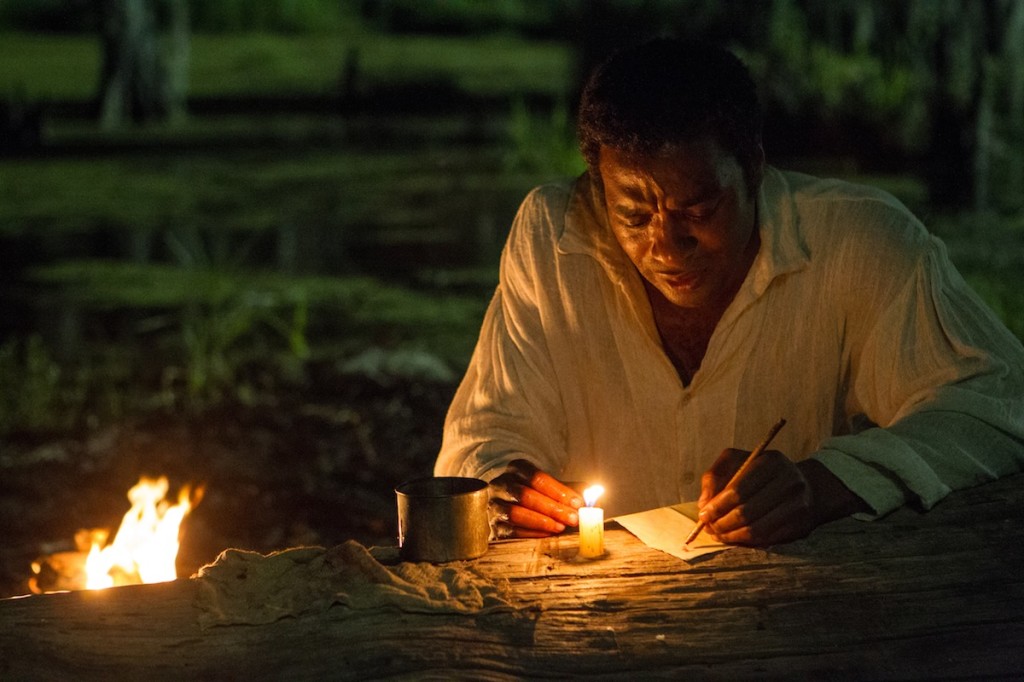 “Let me weep for my children,” says one slave who’s been ripped from the arms of her family in a lesson Solomon must learn for himself. Whether he does makes 12 Years meaningful as well as powerful. The first emotion we witness Solomon feeling is anger in the form of frustration. Whether enslavement is caused by irrational views of blacks, whites, men, women, gays, straights, the wealthy, middle class or poor and especially the individual, the West needs more anger at enslavement. The companion emotion here is sadness, and the black men making this film finally have given us a character who’s a black man that experiences grief and anger in the proper context so we can see that real heroes express emotion based on reason. This is rarely grasped let alone depicted. Solomon is pre-judged for the color of his skin. He is envied for being intelligent. He is hated for being good. This is what makes 12 Years a Slave universal.

What happens when one is free before being enslaved? This is the question, similar to the question of being born sighted then blinded versus being born blind, at the movie’s core. Who can’t relate to being taken from liberty into some type of slave state? 12 Years a Slave shows us a man as he comes to slavery in its most brutal form, how he struggles, chokes and breaks, and, facing a bearded, Bible-thumping monster similar to Frollo in The Hunchback of Notre Dame, flinches in pain and does not submit. Part of this movie’s achievement is its subtlety in dramatizing slavery’s insidiousness: you are not in charge of yourself; you are owned yet you are human so you cannot in reality be owned.

The contradiction between living under dictatorship and man’s essential nature powers each major scene. For example, when left dangling from a tree with barely any breath for life, one man’s toes clutching at the mud are all that supports his life while no one – black or white, slave or master – dares to break tradition, speak, step forward and liberate the man from bondage. This scene dramatizes that slavery puts one at the mercy of depending on others, while alienating the others from helping the one who stands – or hangs – alone. There are other scenes. They remind the 21st century audience that, as life hangs in the balance, brutes, slaves and mobs think nothing of it. 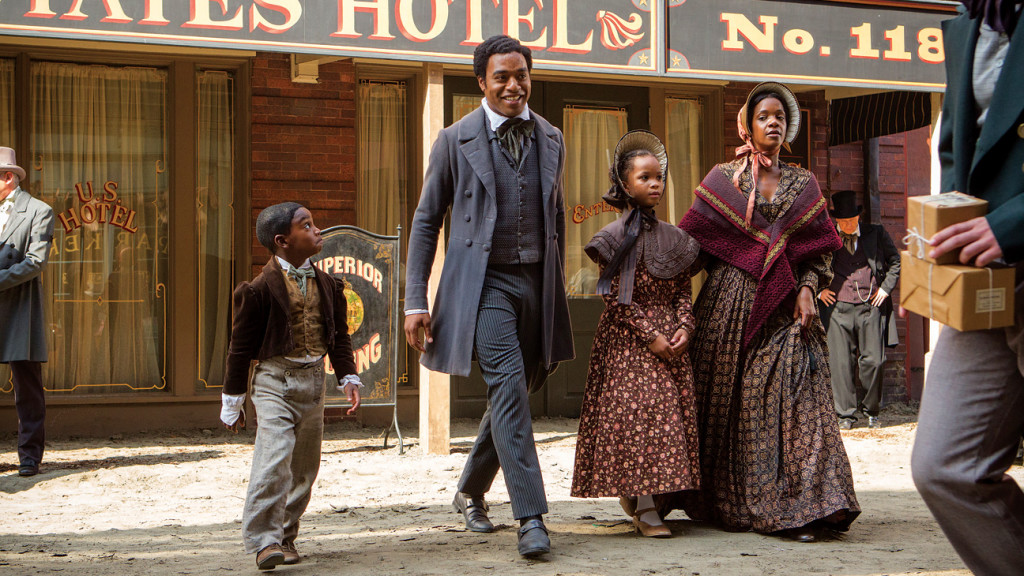 When one slave begs another for euthanasia, and is refused on the grounds that an act of mercy is undue its intended recipient, the act of mercy which results has the film’s most profound effect. Men and their spirits can be broken. 12 Years a Slaveshows us why. When man is no longer free to act, his innermost thoughts can turn to nothing so they are broken and unrealized. Instead, idle thoughts turn to cynicism, which is its own kind of death. 12 Years a Slave, praised as a book by the great republican abolitionist Frederick Douglass, referenced and credited as great in the studio’s press notes, dramatizes one who refuses to submit to death. He doesn’t do it by prayer. He doesn’t do it by brute force. He does it by realizing the meaning and power of two words – I want – in pursuit of his own life. That which awaits him after 12 years as a slave, and how he purges himself of agony and injustice, is the moral of this remarkable tale.

Fox Searchlight’s 12 Years a Slave is being released in theaters on October 18th. The picture also features Brad Pitt as a freethinker, Paul Dano as one that lurks out there still in the life of every black man, and, in one of the movie’s best performances, Sarah Paulson as a slavemistress who pre-figures the 20th century’s archetypical feminist. Yes, you will know why the caged bird sings, to paraphrase poet Maya Angelou, after seeing this movie. You will also see and hear (in piercing sound effects) a more realistic depiction of the history of America’s black people. By recreating the truth about one who was ripped from liberty and stolen into enslavement, filmmakers made a movie which honors its freethinking author and should be seen by any one who’s free to think.