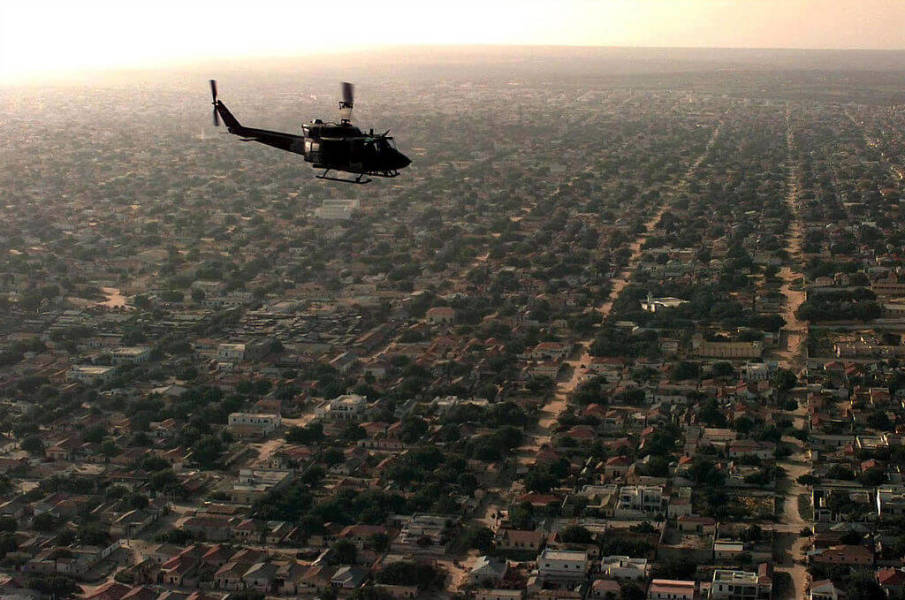 The United States has, over the years, placed men and women in harm’s way for purposes that were not strictly confined to American interests or protecting and defending the individual rights of Americans. Conflicts such as the Korean War, the Vietnam War, and President Obama’s intervention in Libya represent only a small sample of wars from which the United States should have abstained. However, no conflict captured the heinous nature of the altruist morality as the battle that occurred on October 3, 1993 in Mogadishu, Somalia had.

Hundreds of thousands of Somalis were dying from famine and the country was being torn apart by civil war after the overthrow of their dictator. The U.N., with the help of roughly 25,000 U.S. Marines, began a humanitarian mission to force the warring parties to cease fighting and allow international aid to help the starving population. When forces allied with warlord Mohammed Farrah Adid slaughtered over two dozen Pakistani peacekeepers, the U.N. passed a resolution that effectively declared war on Adid and fundamentally changed the purpose of the mission.

Washington, which was reluctant to become too entangled, withdrew the Marines and supplied a significantly smaller force consisting of Army Rangers and Delta Force operators. Their mission was to capture Adid but were denied armored support and AC-130 gunships that would’ve given American forces more safety and better capabilities to complete their mission.

On October 3, 1993, American forces launched a mission to capture a handful of Adid’s lieutenants. Twenty four hours later, 18 American soldiers were dead, two Black Hawk helicopters were shot down, and Americans watched in horror as Somali militia dragged the mutilated bodies of American servicemen through the streets of Mogadishu on national television.

By March 6, 1994, all U.N. and American forces were withdrawn from Somalia.

What happened in Mogadishu reveals a profound and despicable trait that is far too embedded in decision-making when it comes to foreign policy. Look no further than the Samantha Powers’ or the Susan Rices’, or any self-proclaimed neoconservative who demands the United States intervene in any and all conflicts around the globe. What drives these individuals?

Altruism, or the morality that declares relinquishing a value for a non-value is noble and ideal. Politicians and policymakers revel in demanding that Americans sacrifice. The prime motivator for getting people to embrace altruism more enthusiastically is by assigning unearned guilt.

In the case of foreign policy, Madeline Albright said it best when questioning then chairman of the Joint Chiefs, Colin Powell, “What’s the point of having this superb military that you’re always talking about if we can’t use it?”

Just as CEOs, like Steve Jobs, who rightfully earn their wealth by taking risks, pushing radical new ideas, and working vigorously to produce beautiful products, the United States has a military that is capable of achieving swift, decisive, and unforgiving action. What do the intellectuals and the politicians demand from the Steve Jobs’ as well as the men and women of this military–sacrifice.

Just as the producers are penalized for the values they create, the United States military is damned to the duty of defending the unfortunates and the barbarians of the world because they can. After all, waging war only when it is necessary and when only the individual rights of Americans are at stake is inherently selfish. Selfishness is evil, isn’t it?

The precipitous withdrawal from Somalia reveals one important aspect about the altruist morality–it is impractical. When Americans saw what the mission in Somalia had turned into, it became clear the conflict was never worth the price those 18 American servicemen had to pay. The mutilation and the barbarity spoke for itself, it stands as the concrete example of a value being surrendered for a non-value.

The withdrawal also revealed something just as sinister; the politicians never took the mission in Somalia that seriously to begin with!

Tragically, Americans never seem to learn from past lessons and continue to elect politicians who deploy the bravest men and women America can offer to conflict zones that have nothing to do with American self-interest. This madness will continue for as long as sacrifice is held as the ideal.