Chris Christie vs. the Constitution

Christie, like most career politicians, has unlimited faith in unlimited government. 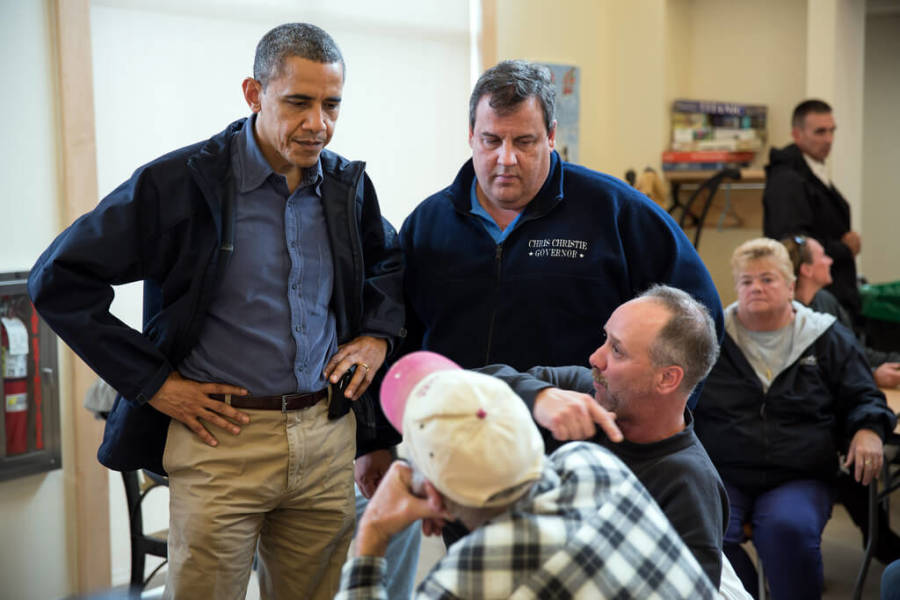 President Barack Obama and New Jersey Gov. Chris Christie talk with local residents at the Brigantine Beach Community Center, which is serving as a shelter for those displaced by Hurricane Sandy, in Brigantine, N.J., Oct. 31, 2012. (Official White House Photo by Pete Souza)

His attack takes it for granted that such policies make Americans safer from terrorism than they otherwise would be.

“You can name any one of them that’s engaged in this,” Christie said of lawmakers (in both parties) seeking to reduce funding for the NSA. “I want them to come to New Jersey and sit across from the widows and the orphans and have that conversation. … I’m very nervous about the direction this is moving in.”

These arguments appeal to emotion, as most flawed arguments do. But they still don’t offer any proof that peering into the private lives of American citizens, with few or no checks on such power, actually helps protect us from terrorism.

Correlation is not causation. In other words, the fact that the government is doing something at the same time a terrorist attack is absent, does not prove that one caused the other.

The real question here is: What causes terrorism?

Terrorism of the 9/11 variety is mainly caused by American activity and involvement in the Middle East. The Middle East is a region rife with the violent ideology of militant Islam. If Americans didn’t need oil from the Middle East, we wouldn’t have so much trouble with that region of the world. We could protect our own sovereignty and leave these primitive socities to fend for themselves, or perhaps discover rationality and freedom on their own some day.

Depending on who you talk to, the solution to this problem will vary. Environmentalists say we should simply use less oil and cut back on industrialized civilization. This, of course, is absurd, and it’s not something most environmentalists themselves are prepared to do.

Others say the answer lies in alternative fuel. That’s well and good, but there’s nothing on the horizon at present that can conceivably compete with oil, much less take the place of it. “Encouraging green energy” is absurd, because the incredible profit potential of discovering an alternate energy source will make anyone who does the next John D. Rockefeller. The reality, at present, is that alternative energy is simply fantasy.

The only rational solution is to permit oil companies to drill in places outside of the Middle East, and do things like build pipelines. Under the Obama administration, and probably under the next one too, there is absolutely no chance this will ever happen. So we’re stuck doing business in a part of the world where our very existence frightens and angers many of the people to the point of violent rage.

If politicians like Chris Christie and Barack Obama care so much about national security, then why don’t they stop peeking into our computers and phone records and try to do something to open up a marketplace for oil outside of the insane and dysfunctional Middle East?

We’re never going to solve the problem of terrorism until we first identify its causes, and come up with solutions that actually decrease our vulnerability. Politicians are less concerned with causes and solutions than with how they look. Governor Christie is no different from any of the others, in this respect. He sneers at anyone who questions NSA policies and calls them “libertarians.” It’s not “libertarianism” he’s attacking; it’s liberty.

Politicians don’t wish to be seen speaking the truth, including the truth about terrorism and the Middle East. Yet that’s what leaders are supposed to do, isn’t it? Not follow the pack and spread the falsehoods and evasions which maintain the cycle of doing everything wrong and continuing to expect different results.

Christie, Obama and others will have you believe that in order to preserve freedom, you must sacrifice it. In order to protect individual rights, you must deny their existence. Perhaps they won’t apply it to every issue, but that’s their only principle of justification for what they’re doing. Our “leaders,” with rare exception, are attempting to lull us into the complacency of evasion, denial and wishful thinking. With leaders like this, who needs enemies?