“The Constitution provides protections for people like the Helvenstons who want to use their property in a peaceful, productive manner without arbitrary intrusion by the government,” said Ari Bargil, an attorney at the Institute for Justice, a public interest civil liberties law firm. “The City of Orlando is violating this most basic of rights by insisting that the Helvenstons destroy their vegetable garden or face severe fines.”

In the coming days, the city of Orlando—which aspires to be “the Greenest City in America”—will decide whether to start fining a couple $500 a day if they don’t uproot and destroy their front yard vegetable garden. That’s why today Jason and Jennifer Helvenston are launching “Plant a Seed, Change the Law,” a protest of Orlando’s law that violates the Helvenstons’ constitutional right to peacefully use their property to grow their own food. 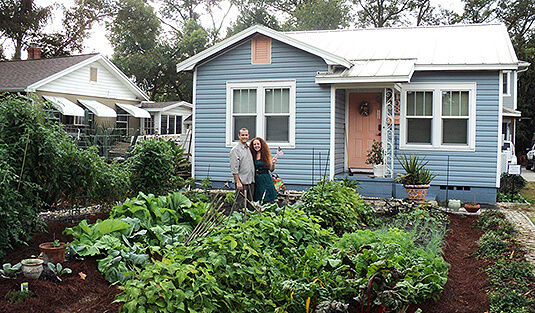 The Helvenstons have dedicated their lives to sustainable living. Not only does their garden provide them with their own food, but it has become a community attraction where the couple teaches neighbors and local youth about homegrown vegetables. But the city alleges that the Helvenstons are in noncompliance with the city code and demands they uproot their garden and replace it with “lawn”—or face fines of up to $500 per day.

“The greatest freedom you can give someone is the freedom to know they will not go hungry,” said Jason. “Our Patriot Garden pays for all of its costs in healthy food and lifestyle while having the lowest possible carbon footprint. It supplies valuable food while being attractive. I really do not understand why there is even a discussion,” Jason continued. “They will take our house before they take our Patriot Garden.”

Jason and Jennifer’s cause has already received significant national attention, including a feature in the New York Times and an op-ed published today in the The Daily Caller, as well as a broad array of support amongst environmental activists and property rights advocates across the country.

“The Constitution provides protections for people like the Helvenstons who want to use their property in a peaceful, productive manner without arbitrary intrusion by the government,” said Ari Bargil, an attorney at the Institute for Justice, a public interest civil liberties law firm. “The City of Orlando is violating this most basic of rights by insisting that the Helvenstons destroy their vegetable garden or face severe fines.”

“Our neighbors love our edible garden and even have their own veggies growing in it,” said Jennifer. “So many neighbors tell us amazing stories, whether it is great memories of Victory Gardens or dreams of planting their own Patriot Garden. This has brought our community closer together than we could have ever imagined. We are blessed.”

The inspiration for the garden came while the Helvenstons were in Tanzania, attempting to explain the concept of a lawn to local villagers. “It was an epiphany for us,” said Jennifer. “Humans need food,” she explained. “Why wouldn’t we cultivate a crop that was beneficial to us? [A lawn] just did not seem logical to me any longer.”

When news of the story initially broke in early November, the city appeared inclined to help the Helvenstons navigate the city’s outdated ordinances while still being able to keep their garden. A special “task force” was created to consider amending the law to allow for front yard gardens. But as deadline after deadline was postponed, it has become evident that such tactics have simply allowed the city to delay its enforcement. Despite assurances from the city that the Helvenstons would be able to keep their garden or that the code would be updated to allow for some sort of compromise, there has been no official statement from the city that either will occur.

“We are asking residents across Orlando and the country to join us in planting a ‘Patriot Garden’ in their own front yards,” said Jennifer. “Please e-mail us at [email protected] and we will send you a free packet of radish seeds and a small sign for your front yard that says ‘Patriot Garden: Plant a Seed, Change the Law.’ Join us in telling the city of Orlando and local governments everywhere, hands off our food!” For more information, go to patriot-gardens.com.